The Developmental Origins of Health and Disease (DOHaD) concept postulates that in utero exposures influence fetal programming and health in later life. Throughout pregnancy, the placenta plays a central role in fetal programming; it regulates the in utero environment and acts as a gatekeeper for nutrient and waste exchange between the mother and the fetus. Maternal exposure to air pollution, including heavy metals, can reach the placenta, where they alter DNA methylation patterns, leading to changes in placental function and fetal reprogramming. In this entry, we explore the current knowledge on placental DNA methylation changes associated with prenatal air pollution (including heavy metals) exposure and highlight its effects on fetal development and disease susceptibility.

Air pollution is an environmental problem that threatens human health and is a major cause of mortality worldwide. In 2019, air pollution caused an estimated 6.67 million deaths, accounting for 12% of all deaths globally [1]. Pregnant women and their developing fetuses are particularly vulnerable to the adverse health effects of air pollution. In pregnant women, the respiratory adaptation to pregnancy leads to an increase in tidal volume and an increase in oxygen consumption [2][3]. Air pollution particles, due to their small size, are inhaled into the lungs, and the smallest particles infiltrate into the bloodstream reaching the placenta and fetus [4][5][6]. Such in utero exposures can affect fetal development, cause adverse birth outcomes, and increase the risk of developing certain diseases in later life, as postulated by the Developmental Origins of Health and Disease (DOHaD) concept [7][8][9][10].

Substantial evidence has associated prenatal air pollution exposure with a range of adverse health outcomes including gestational diabetes [11], preeclampsia [12][13], spontaneous abortions [14][15], preterm births [16][17], low birth weights [18], macrosomia [19], and stillbirths [20]. Furthermore, air pollution exposure during pregnancy was associated with an increased risk of developing cardiovascular diseases [21], neurodevelopmental alterations [22], respiratory problems [23][24], and cancer [25][26]. However, due to the complex composition of air pollution and the intricate processes involved in fetal development, the mechanisms by which air pollution causes these adverse health effects are not yet completely understood.

During the entire pregnancy, the placenta serves as a functional interface that connects the mother to the developing fetus [27]. It secretes hormones and regulates the in utero environment for optimum fetal growth and development. Subsequently, the placenta transfers nutrients from the mother to the fetus and regulates gas and waste exchanges [27]. In this way, the placenta plays a central role in fetal programming, and we suggest that altered placental physiology and function, possibly through epigenetic modifications such as DNA methylation, can provide a mechanism linking prenatal air pollution exposure with pregnancy complications, fetal growth abnormalities, altered newborn phenotypes, and an increased risk of developing certain diseases during the lifespan. Here, we explore the current knowledge on placental DNA methylation changes associated with prenatal air pollution (including heavy metals) exposure and highlight its effects on fetal development and disease susceptibility.

Apart from global DNA methylation, prenatal air pollution exposure was found to alter the promoter methylation of placental candidate genes that are involved in key biological processes [28][29][31][32][34][35][36][37][38][39][40]. In the EDEN cohort, exposure to nitrogen dioxide and PM10 altered the methylation patterns of ADORA2B, PXT1, KCTD20, CAPN10, SLC44A5, ADCK5, TGM6, TUBGCP2, and KYNU in placental tissues [28]. These genes function in placental development and were previously associated with hypoxia and preeclampsia [41][42], a pathology that has been linked with air pollution exposure during pregnancy [12][13]. In a separate study, mothers living near major roadways showed differential methylation at seven CpG sites, three of which were located in protein-coding genes (PTPRN2, TMEM125, and VPS4A) [31]. Similarly, in the EARLI cohort, differentially methylated regions were found in five protein-coding genes (F11R, ZNF442, SLC25A44, STK38,and PTPRH) in the placenta of women exposed to high levels of nitrogen dioxide and ozone during pregnancy [32]. These differentially methylated regions in the placenta did not show DNA methylation changes in cord blood, and hence, they appeared to be tissue-specific. Additionally, differentially methylated regions of three genes (RNF39, CYP2E1, and PM20D1) in cord blood showed consistent nitrogen dioxide and ozone exposure-related altered DNA methylation in the placenta [32], indicating that placental DNA methylation changes may be passed onto the developing fetus. These genes regulate immune and inflammatory responses, and their altered methylation patterns might play a role in preeclampsia.

In China, exposure to PM10 during the first and second trimesters increased HSD11B2 methylation, a gene involved in fetal growth and glucocorticoid metabolism [29]. Furthermore, the increase in HSD11B2 methylation was more prominent in the placental tissues of fetal growth-restricted newborns compared to the normal-growth newborns. Previously, HSD11B2 methylation was negatively associated with placental HSD11B2 gene expression, fetal growth indices, and adverse neurobehavioral outcomes in infants [43]. The Shanghai Mother-Child Pairs Cohort found that exposure to PM2.5 during the second and third trimesters as well as the entire pregnancy was associated with increased methylation of BID and decreased methylation of IGF2; these genes are essential for fetal growth [40]. Furthermore, for every 1% increase in BID methylation, there was a decrease in head circumference and biparietal diameter in the second trimester [40]. In Korea, the COCOA study showed that high PM2.5 exposure and low cord blood vitamin D levels during the first trimester were associated with decreased placental methylation of AHRR, DPP10, and HLA-DRB1, and early-onset persistent atopic dermatitis in children [39].

In the ENVIRONAGE birth cohort, PM2.5 and black carbon exposure increased placental DNA mutation rates as well as increased the promoter methylation of tumor suppressor (p53) and DNA repair (APEX1, OGG1, and ERCC4) genes. This study suggested that prenatal PM2.5 and black carbon exposure reduces the DNA repair capacity of the placenta and fetus, which may increase the risk for carcinogenesis in later life [36]. In the same cohort, the analysis of placental tissue from mothers exposed to PM2.5 in the first and third trimesters showed altered methylation of the genes (CLOCK, CRY1, NPAS2, and PER1–3) involved in circadian rhythm regulation [35]. Previously, dysregulation in placental methylation of these circadian pathway genes was associated with preeclampsia [44]. Another study indicated that second-trimester PM2.5 exposure decreased promoter methylation of the Lep gene, a hormone involved in intrauterine development, embryo implantation, energy regulation, and fetal growth [37]. Interestingly, the promoter methylation of Lep was higher in the placental tissue of male neonates compared to those of female neonates, suggesting that altered DNA methylation in the placenta may be sex-specific [37].

Heavy metals such as arsenic, cadmium, lead, manganese, mercury, and nickel are common constituents of industry and traffic-related air pollution. Particulate matter, mainly PM2.5 and PM10, has a strong potential for adsorbing heavy metals, which then enter the human body through inhalation [45]. There is increasing evidence that heavy metals bound to particulate matter play a crucial role in the adverse health effects caused by particulate matter [46][47][48]. Therefore, we also included studies investigating placental DNA methylation changes and prenatal exposure to heavy metals [49][50][51][52][53][54][55][56].

Most studies on prenatal heavy metal exposure and placental DNA methylation changes were conducted within the RICHS cohort. In the RICHS cohort, maternal exposure to high levels of arsenic, cadmium, lead, mercury, and manganese were associated with increased placental NR3C1 methylation compared to the low exposure groups [49]. Placental NR3C1 plays a vital role in cognitive and neurodevelopment by regulating the development of the child’s hypothalamic-pituitary-adrenal (HPA) axis and cortisol levels. Therefore, altered placental NR3C1 methylation may provide insight into cognitive and neurodevelopmental abnormalities in children in later life [49]. In a separate study, mothers with high toenail cadmium concentrations were found to have low levels of placental PCDHAC1 methylation and were at an increased odds of giving birth to an infant that was small for gestational age or with a decreased head circumference [51]. Another study showed that high placental cadmium levels were associated with differential methylation at 17 CpG sites, and DNA methylation at 9 of these 17 CpG sites was associated with increased expression of genes involved in inflammatory signaling and cell growth (TNFAIP2, EXOC3L4, GAS7, SREBF1, ACOT7, and RORA) [52]. Furthermore, high placental expressions of TNFAIP2 and ACOT7 were associated with decreased birth weight. High placental expression of ACOT7 was also associated with decreased birth length and decreased head circumference [52]. Moreover, within the RICHS cohort, exposure to mercury, measured in infant toenails, was associated with differential methylation at 339 loci; 10 of these differentially methylated loci resided in the CPLX1, TTC23, and EMID2 genes and were associated with a high risk for adverse neurobehavioral profiles [55]. Exposure to high levels of manganese, measured in infant toenails, was associated with differential methylation at 5 CpG loci (EMX2OS, ATAD2B, FTO/RPGRIP1L, EN1, and LOC284276). These CpG loci resided in genes involved in neurodevelopment (EMX2OS, ATAD2B, and EN1) and fetal growth (FTO/RPGRIP1L) [54]. The function of LOC284276 is currently unknown; however, for every 10% increase in placental LOC284276 methylation, there was a decrease in birth weight [54].

In the New Hampshire Birth Cohort Study, placental arsenic levels were associated with differential methylation at 163 CpG sites. Of these, 13 CpG sites attained genome-wide significance and were located at the LYRM2 (11 CpG sites), CAMTA1 (1 CpG site), and CCDC57 (1 CpG site) genes [53]. A nested cohort in Bangladesh found that maternal exposure to arsenic, via contaminated drinking water, was associated with hypermethylation at several CpG sites, which were mainly located within open sea regions [50]. Moreover, prenatal arsenic exposure was associated with CpG methylation at the NR3C1 gene (unadjusted analysis) and the TRA2B, PLCE1, and CD36 genes (adjusted analysis) [50].

The omega cohort and pilot case-control placenta microarray study showed that cadmium levels were higher in the placental tissues from female neonates (5 ng/g) compared to male neonates (2 ng/g). High cadmium levels were associated with hypomethylation at three CpG sites (ARL9, SIAH3, and HS3ST4) and one genomic region (region 86974674 to 86975244 on chromosome 7; CROT and TP53TG1) in the placental tissue of female neonates [56]. In the placental tissue of male neonates, high cadmium levels were associated with hypomethylation at two CpG sites (MECOM) and two genomic regions (region 169379554 to 169380078 on chromosome 3 and region 1792758 to 1792758 on chromosome 8; MECOM and ARHGEF10) as well as hypermethylation at one CpG site (SALL1) [56]. These differentially methylated genes are involved in cell damage response (SIAH3, HS3ST4, and TP53TG1) in females and cell differentiation, angiogenesis, and organ development (MECOM and ARHGEF10) in males. These results suggest that cadmium-associated placental DNA methylation changes may induce fetal growth abnormalities in a sex-dependent manner [56].

As a natural barrier that directly connects the mother to the developing fetus, the placenta is continuously in contact with substances to which both the mother and fetus are exposed [27]. Perturbations in the maternal environment can be transferred to the fetus through altered placental functions, a concept known as fetal reprogramming. As a result, the placenta, which is genetically identical to the fetus, contains important information on the in utero fetal life and can be considered as a “mirror” of the future health and development of the newborn [35]. The studies included in this entry provide evidence that prenatal air pollution and heavy metal exposure is associated with altered placental DNA methylation at both the global and candidate gene promoter levels [28][29][30][31][32][33][34][35][36][37][38][39][40][49][50][51][52][53][54][55][56] (summarized in Figure 1); however, whether the changes in gene promoter methylation affected the expression of the gene was not established in the majority of studies.

Aside from the studies on placental mitochondrial DNA methylation [34][38], no genes were investigated in more than one study. This makes it difficult to determine if the alterations in candidate gene promoter methylation are specific to a particular socio-demographic population or to prenatal air pollution exposure in a certain geographical location. Different locations have different sources and chemical compositions of air pollution and individual components are not often encountered in isolation within natural settings. 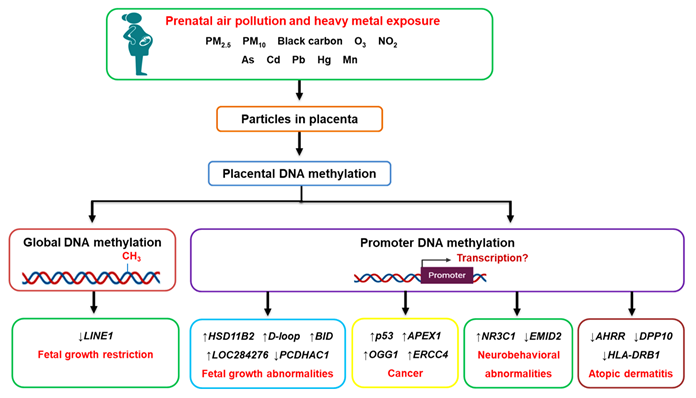