The term “adaptation” is currently used in the climate field. It originated from natural science in the field of population biology and evolutionary ecology. It originally referred to the general characteristics that ensure the survival and reproduction of organic individuals in living environments. The definition of “adaptation” has many attributes, including the two most important points. First is the spatial scale of adaptation, which depends on who is responsible. Second is the nature of adaptive behavior, whether it is spontaneous or conscious or it is planned or prescriptive. The former is usually short-term and tactical adaptation, which is directly related to specific climate change. The latter is more strategic, long-term, and proactive and is usually formulated by government departments and used as part of policy adaptation measures. The adaptation to climate change in the literature is sometimes divergent at the temporal and spatial scales. Short-term adaptation is more of a reaction, and higher-scale adaptation is considered an expected adaptation through policies, projects, and recent plans and actions.

1. Adaptation, Adaptability, and Capacity of Response

Adaptability in ecology is the ability to adapt to certain environmental changes, while adaptation is the characteristic of structure, function, and organizational behaviors [1]. Adaptability is the external manifestation of adaptive ability and shows a way to reduce vulnerability [2]. A system’s capability to better handle exposure and sensitivity reflects the capability to adapt [3] (Figure 1). Many adaptive forms and levels can be divided based on timing (anticipated, current), intention (automatic, planned), spatial scales (local, wide-area), and form (technical, behavioral, financial, economic, institutional, and information) [4]. The adaptation of the original system can be distinguished from the degree of adjustment [5]. 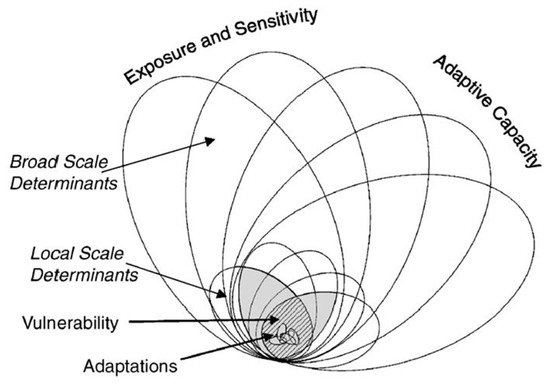 Figure 1. Nested hierarchy model of adaptation, adaptive capacity, and vulnerability.
Local adaptive capability is a comprehensive reflection of several conditions [6][7], which is reflected by factors such as management capabilities, economic and financial conditions, technology and information resources, infrastructure, and institutional environments [8][9][10][11][12][13]. In general, improving environmental conditions allows a species, population, or individual to better adapt to the environment. Due to the human field and social ecosystems, the standards of adaptation far exceed the ability to survive and reproduce, which includes the results of social and economic activities and the quality of life [3]. Smithers and Smit noted that the adaptability of the human system includes the capability of the social ecosystem to respond to environmental changes and to promote improved conditions related to the environment [14].
Kasperson et al. distinguished between adjustment and adaptation [15]. They believed that adjustments are a system’s response to interference or pressure without fundamentally changing the system itself. This is a short-term and relatively small system adjustment as adaptation is the system’s response to interference or pressure. The response to stress changes the system itself and can sometimes transform a system state to a new state [16]. The concepts involved in adaptability include the coping ability, management capacity, stability, robustness, and flexibility [17][14][18][19][20]. From the definition of ISDR (International Strategy for Disaster Reduction), the coping ability refers to all available forces and resources in a community or organization that can reduce the risk level or impact of a disaster [21]. Brooks et al. defined adaptive capability as natural, economic, institutional, or human resources that can be used for adaptation and included the availability of information, professional knowledge, social networks, and other resources [22]. Cultural values also play an important role in the construction of human adaptability [23][24].
The IPCC analyzed the relationship between the adaptability and capacity of a response for the social ecosystem and believed that the connotation of adaptability should be broader than that of the capacity of response. However, these all depend on the specific definition of adaptability and capacity of response in studies of coupled social ecosystems [24]. Adger [25], Smit and Wandel [3], and IPCC [26] all defined the system’s coping ability or capacity of response as adaptability. Turner et al. distinguished the capacity of response from adaptability, considered that both are components of the system resilience, and regarded adaptation as a manifestation of the reconstruction of the system after a response [27]. Generally, the capacity of response is an inherent attribute of the system that describes its ability to respond to interference, mitigate potential damage, take advantage of opportunities, adjust to system changes, and respond to system transformation. The capacity of response is also an attribute that the system has priority over interference [24]. Vogel believed that the coping ability is a short-term behavior only for survival, while the adaptive ability is used for long-term or more continuous adjustments [28].
Boundaries between the medium- and long-term scales are blurred. The response refers to the actions taken by society or individuals when faced with the adverse consequences of climate change or natural disasters, which are considered short-term adjustments to extreme events [25]. Coping strategies usually occur naturally and cause varying degrees of vulnerability. Adaptation includes the stress response, such as changing sources of income, immigration, or other lifestyle changes, as well as long-term intervention by government agencies [29].

Due to diversity and differences of views, the relationship between adaptability and resilience is unclear. According to Smit and Wandel [3], some scholars have equated adaptability with social resilience. Gunderson et al. regarded adaptability as the effectiveness of a system to changes in resilience [30]. Carpenter et al. regarded adaptability as a component of resilience, which reflects the response of system behaviors to disturbances [31]. Adger regarded adaptability as the collective ability of human activists to manage resilience, which includes reducing or eliminating undesirable factors, creating new expectation factors, and promoting the transformation of the current system to the desired state [25]. Folke et al. believed that vulnerability is the opposite or antithesis of resilience [32]. However, the vulnerability of a system with resilience is lower than that of a system without resilience. Resilience is related to the capacity of response in a vulnerable element, making it smaller than the negative range of vulnerability [24].
The most fundamental difference is that resilience is applied to the maintenance of system behaviors, and the opposite of vulnerability is the ability to resist interference and maintain the system structure. Therefore, for the elements of social ecosystems, resilience appears to be a true subset of the adaptive capacity. Adaptability includes not only the resilience of the system but also its ability to cope with impacts and take advantage of opportunities [33]. Adaptation is a measure taken by humans with a constant evaluation of vulnerability. In the formula Vist = f(Eist, Aist) as modified by Smit and Pilifosova [6], V is the vulnerability, E is the exposure sensitivity, and A is the adaptive capacity. Here, i refers to the system, s refers to the climate stimulus, and t is time. The sensitivity refers to the degree to which the system suffers and responds to climate stimuli. Exposure is a factor of risk that is the total amount of hazard-affected bodies that are exposed to a hazard. Gallopin [24] used a systematic perspective to comprehensively analyze the relationship between the concepts of vulnerability, resilience, and adaptability (Figure 2), which has been adopted by some scholars [34][35][36][37]. 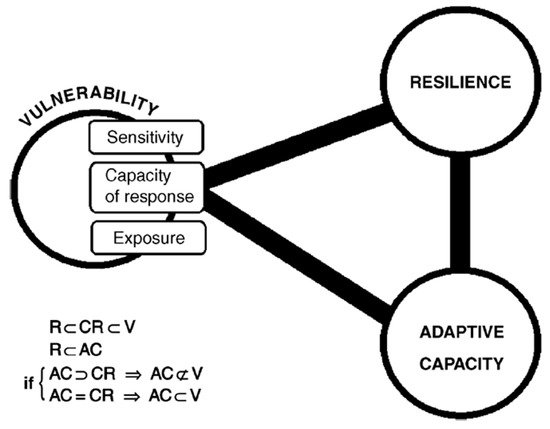 Climate change risks can be managed through efforts to mitigate climate change forcers, adaptation of impacted systems, and remedial measures. Mitigation refers to efforts to reduce or prevent the emission of greenhouse gases or to enhance the absorption of gases already emitted, thus limiting the magnitude of future warming [38]. Mitigation avoids difficult to handle situations, while adaptation aims to manage the inevitable consequences [39]. There are uncertainties in adaptive strategies that require long-term perspectives, which may be unpopular for current governments. The current understanding of adaptation is to regard the adaptation period as placing future social public resources in danger. The adaptation strategies must be concurrent and complementary with mitigation efforts because, over the long term, emissions reduction choices will determine the severity of climate change, its impacts, and the degree of adaptation required in the future [40]. Unlike mitigation, adaptation is most practical at the local level.