The GHG concentrations obtained after analyzing the gas samples were averaged and are presented in Figure 1. The GC has the ability to detect five varieties of GHGs, namely carbon dioxide (CO2), methane (CH4), carbon monoxide (CO), nitric oxide (NO), and nitrous oxide (N2O). CO2 is the dominant GHG, followed by CO and NO, whereas N2O was found in the lowest concentration in this experimental pig barn. The GHG concentrations were measured three times in each treatment instance (before, after, and one hour later of treatment completion), as shown in Figure 1. 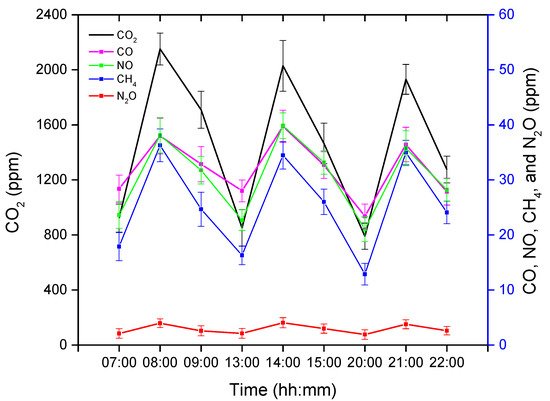 Group-wise pig posture and walking activity scores are measured by dividing the number of pigs with a particular posture by the number of frames before, during, and after treatment hour. Most of the time, pigs stayed in the lying position (sternal and lateral). However, the pigs were more active in the morning compared to the day and nighttime. Moreover, at night, pigs primarily rested in the lateral lying position. With the peak value in GHGs, the standing and walking activities of the pigs were decreased significantly (almost by half), as shown in Figure 2a,b. The standing score was increased with the decrease in GHGs (one hour later of treatment). A similar pattern was followed by the walking activity score, except in the morning, where the walking score did not increase noticeably. Likewise, the sternal lying behavior of the pigs also decreased with the increase in GHGs (Figure 2c). Conversely, the lateral lying behavior of the pigs increased significantly in the morning and daytime (nearly 40% in the morning and 30% in the day). However, it was marginally increased in the nighttime, as given in Figure 2d. One hour later of the treatment (08:00–09:00, 14:00–15:00, and 21:00–22:00), the GHGs remained relatively higher than before the treatment. Therefore, the respective effects on all the pigs’ activities were observed, as presented in Figure 2. The total distance traveled (in terms of pixels) by all walking pigs was higher in the morning before treatment hour and observed least in the nighttime treatment hour. Figure 3 demonstrates the total distance traveled and the locomotion pattern of walking pigs on the morning of the day 1 experiment.

Figure 2. Group-wise average posture and walking frame scores of pigs: (a) standing score, (b) walking score, (c) sternal-lying score, and (d) lateral-lying score. The scores show the average number of pigs in a frame with a particular posture. The bars represent the average activity scores obtained in three days at an hour before, during, and after the treatment period in the morning, day, and nighttime.

The tracking algorithm provided a virtual ID to each pig and remained tracked until the number of missing frames was less than the specified age of the ID (50). The individual posture and walking activities were determined similarly as group-wise behavior measurements, except treating them individually. The posture and walking activity scores of each pig are given in Figure 4. Pig 5 was more active than the other pigs, whereas Pig 3 was inactive most of the time. 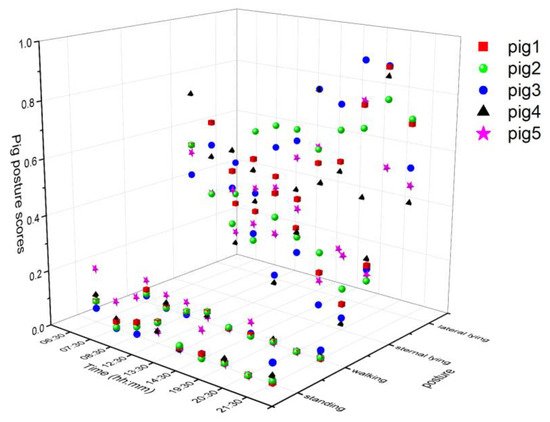 Figure 5. Class-wise and overall precision-recall evaluation metrics of the model: (a) YOLOv4 model and (b) Faster R-CNN model.

Figure 7. Sample of tracked frames by the tracking algorithm: (a) the first frame, (b) the 150th frame as Pig 5 is moving, and (c) the 300th frame where Pig 5 has changed its posture from standing to sternal lying.