Multi-homing is a condition that describes a specific set of computers that builds various IP addresses in conjunction with many associated networks. The multi-homed host machine is originally associated with several data links or ports in this case. Such links or ports can relate to separate networks or related networks. A multi-homed mobile network must operate with various protocols and systems (e.g., Wi-Max, Wi-fi, 3 G). This may occur in any of the cases below. The following figure displays the network’s general multi-homing configuration.
In the following Figure 1, pMAG represents the previous MAG, nMAG represents the new MAG, pRAN represents the previous radio access network, and nRAN represents new radio access network (RAN). 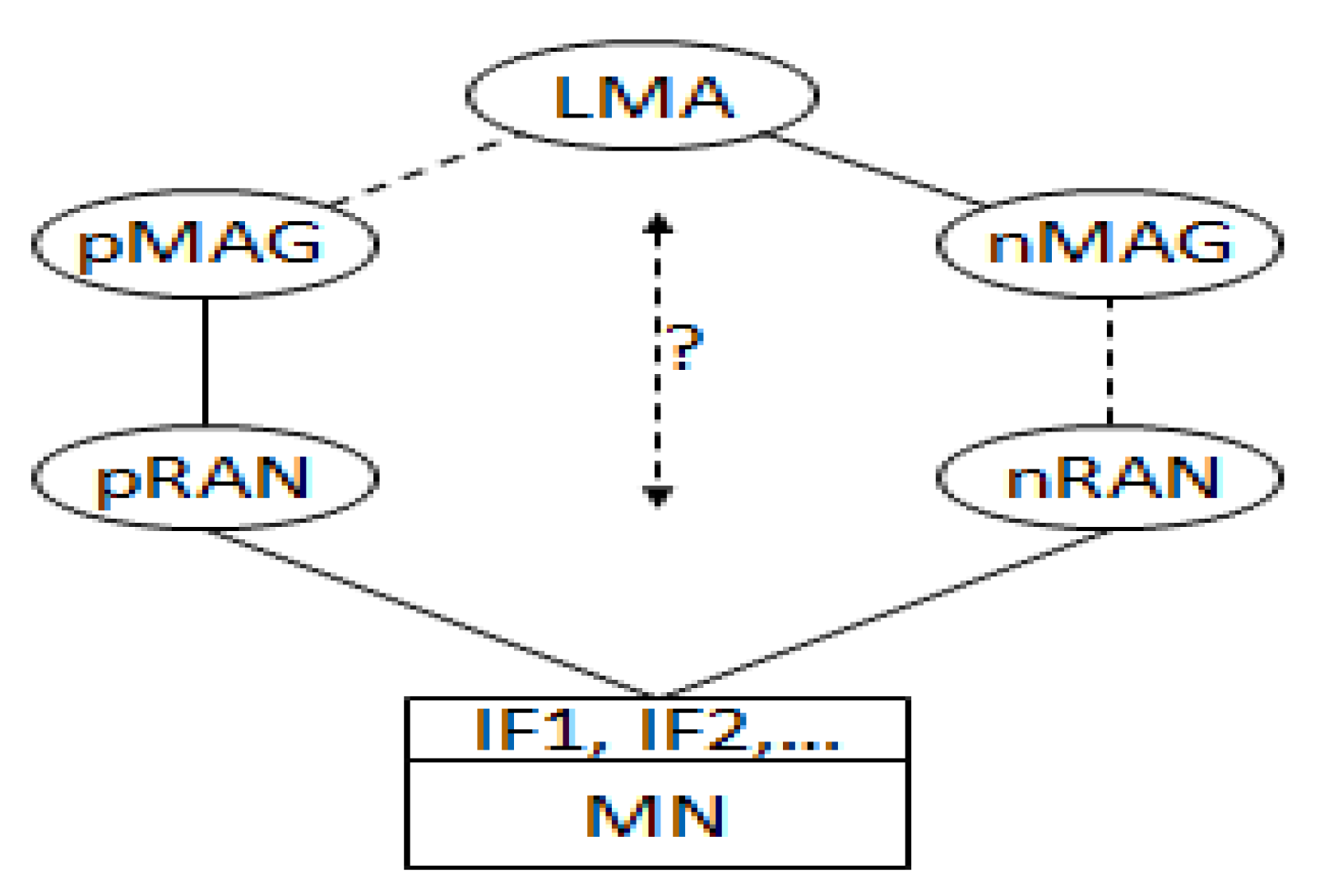 1.2. Introduction of Virtual Interface with Multihoming Based on PMIPv6

A virtual interface (VI) is a physical port connected to a layer 3 virtual LAN (VLAN) configured on a switch to the layer 3. On the virtual interface, the routing parameters can be modified to allow the layer 3 transition to route network traffic from one layer 3 VLAN to another, devoid of utilizing an external router. This facilitates the continuous transfer of packets from correspondent node (CN) to mobile node (MN), and vice versa. The virtual interface (VI) is a common solution to implementing pseudo-interfaces and is usable on most operating systems such as Free-/Net-/OpenBSD, MAC OS X, Linux, and smooth MS Windows. The VI is utilized to execute a tunnel interface, a loop back interface, etc. Figure 2 summarizes the Proxy Mobile IPv6 (PMIPv6) support for the VI. The VI abstracts the associated physical interfaces (PIs) and supplies the host with a secure interface, avoiding any device-specific interruptions. From an application perspective, the VI is the only interface available, and all PIs are concealed. Applications often connect to the VI-assigned virtual interface and address [1]. The main motivation of this work is to provide flawless handover for Proxy Mobile IPv6 protocol in any environment. 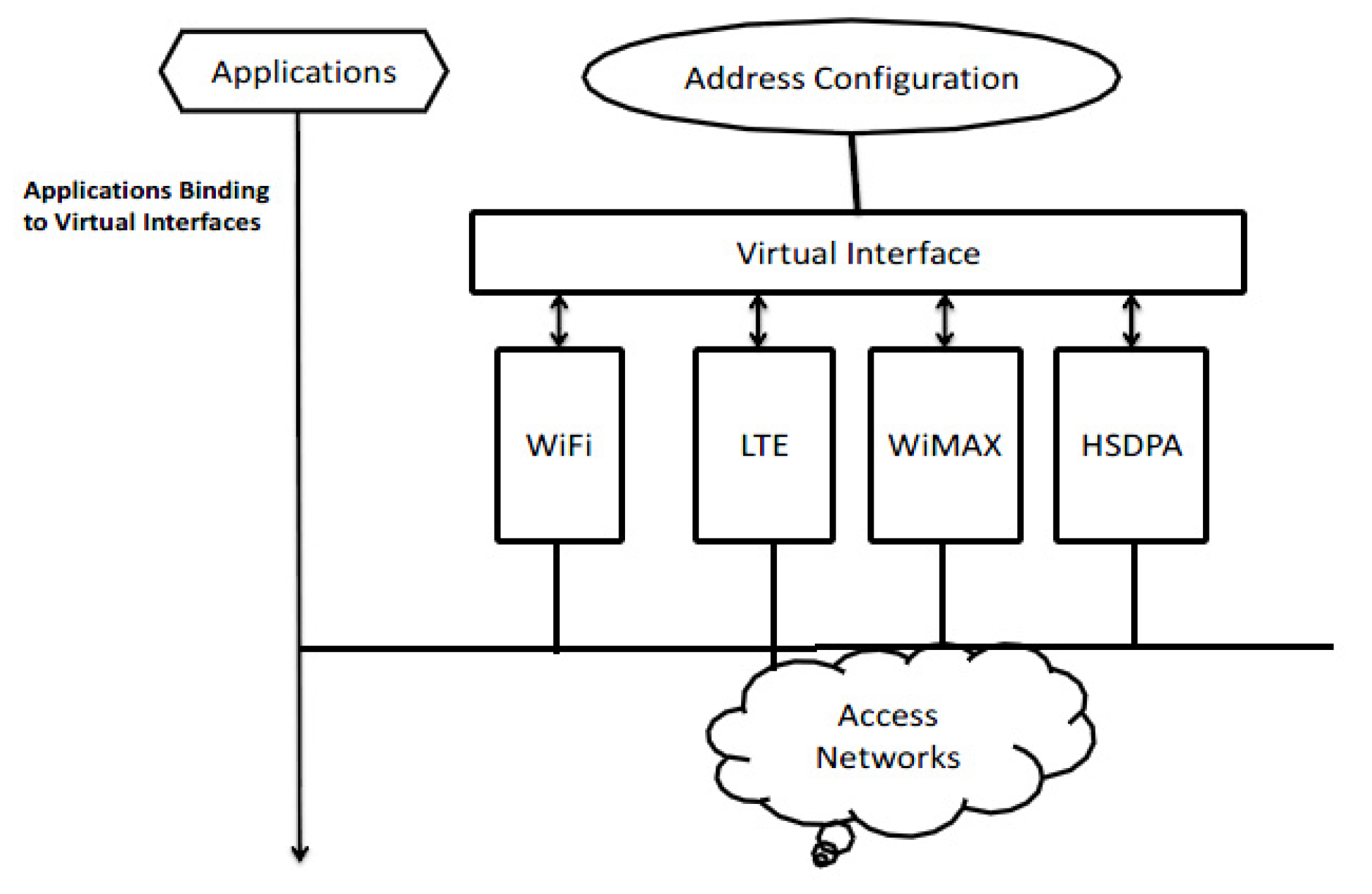 The SI is accessed from the IP stack within the Single Interface (SI) framework. The Logical Interface (LI) sits in the IP layer, which makes sequential and simultaneous use of different PIs. These different PI’s hide the multiple PI from the upper IP layer [2].
Because of the presence of a single interface in the IP stack, the local mobility anchor (LMA)-based transfer of MN takes place using the same MN prefix that is connected to the mobility access gateway (MAG) without considering the PI. For all multiple PIs the MN uses the same IP addresses. But here the LI is configured instead of the PI. The LMA also forwards the IP from the MAG to the MN via the PI in question. In fact, applications send the data to the appropriate interface via the PI to add the IP address (although this method is possible if only one address is configured using the logical interface).

2.1. An Outline of the Proposed Technique—PMIPV6/AAND

The proposed technique, PMIPv6/AAND, would introduce a novel Multiple Virtual Interface (MVI) technique in PMIPv6 to enable multi-homing. The technique supports effective inter-technology handover and solves the LL-ID swapping problem described in further sections. Additional flag fields, auxiliary advertisement of neighbor detection (AAND)) fields, i.e., ‘D’ and ‘R’ are displayed in PMIPv6 message format. The new technique is known as PMIPv6/AAND, adapted from F-PMIPv6. The message format of this proposed paper is designed based on the paper [3].

Modifying the protocol as it is built today to suit the requirements of network service and standardization is complicated. As a result, the accumulation of an original IPv6 header would make it more difficult and hinder the network service. However, it is much more effective to add a new field in an old header. For this purpose, adding new flags to basic information like HI/HACK is being discussed. A similar method was adopted for erstwhile protocols based on MIPv6. The only two modified messages in F-PMIPv6 are HI and the HACK.
By utilizing the HI message, the PMIPv6/AAND assigns the M-MAG to the MN. Moreover, this M-MAG will be attached to the MN through the concerned MN-ID, MN prefix, and information about the concerned LR session. In the PMIPv6/AAND, the M-MAG is acknowledged by the HACK message. The concerned HI also presents the LR state information. Figure 3 and Figure 4 illustrate the customized form of the inventive HI and HACK messages, correspondingly. The recently initiated new fields are represented in bold and explained below.

Figure 4. PMIPv6/ AAND—Handover Acknowledgement Message Format [3].
D flag (PMIPv6/AAND flag): This is the new flag introduced in the proposed system. Here, the working mechanism of the HI message is derived from the F-PMIPv6 explained in [4]. Moreover, this flag value must be assigned as 1, if not, it turns into the F-PMIPv6 message. This flag value carries the LR information.
R flag (LRI flag): This novel flag is assigned as 1 to point out that it includes appropriate LRI information. If this is not the case, localized routing initiate (LRI) details will not cumulate in this message.

Figure 5 demonstrates multiple VIs of the projected mechanism architecture. Among the network layer and link layer there are several VIs paired to PIs. Every PI has a binding attribute and is bound to a VI. Two types of PI binding properties are present in the proposed architecture. One is a principal type (pci) and the other is a secondary type (sec).The packets are forwarded by the PI of the principal ‘pci’. The solid line is the main binding symbol. Except for the VI which has the ‘pci’ binding, the ‘sec’ type PI is tied with the VI. The dotted line in Figure 5 shows the PI’s ‘sec’ element. When the ‘sec’ type is used, the ‘pci’ PI and then the VI link become down. Every VI has a dissimilar PI. Every PI is tied with a ‘sec’ type to all VIs, except the PI which has the ‘pci’ binding. Here, the similar LL-ID is share with the ‘pci’ type PI and VI. This is very useful to identity neighbour discovery (ND) in a multi-virtual interface [1]. 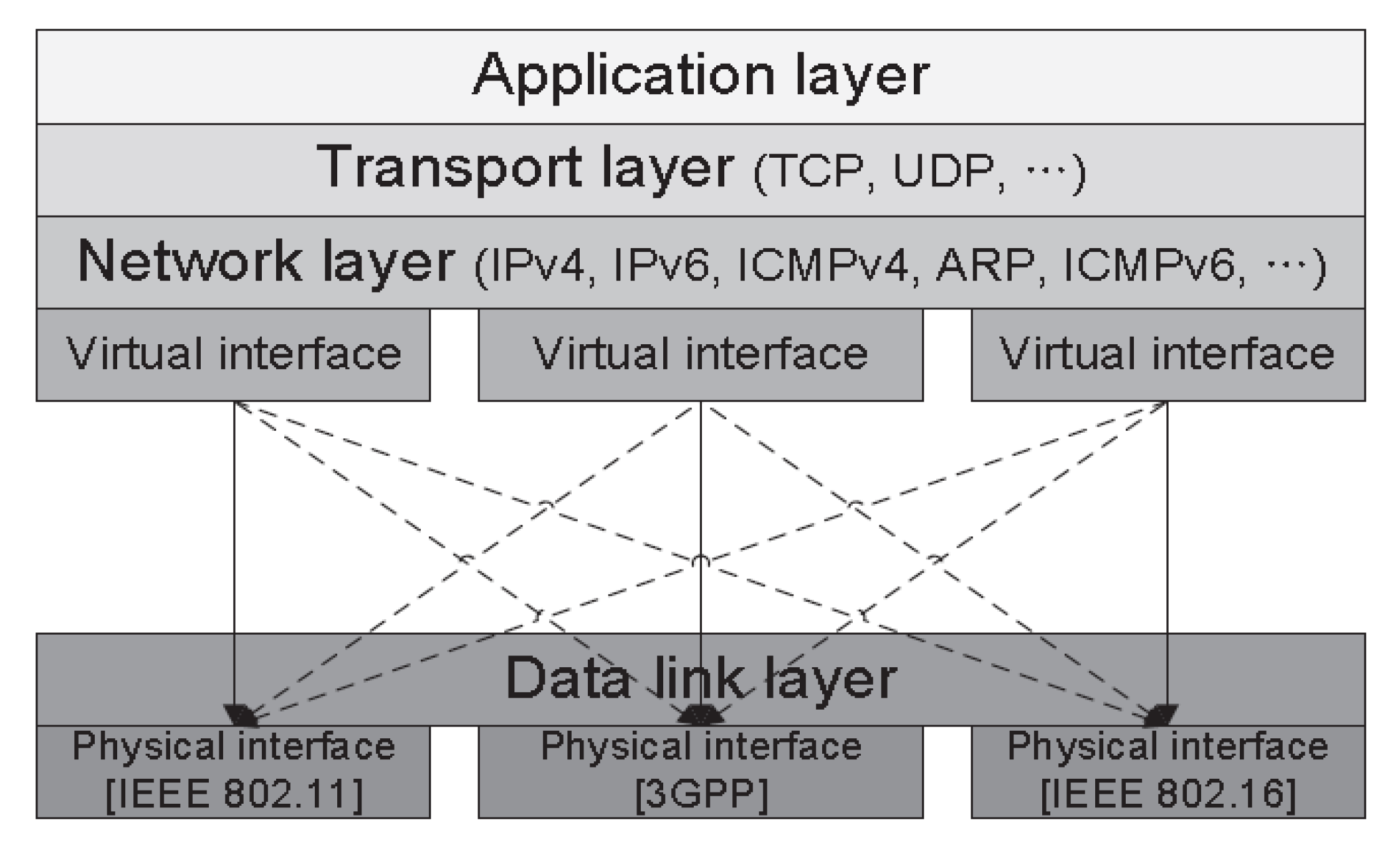 PMIPV6/AAND works powerfully on any single LMA, devoid of the reflection of the position of the MAG. PMIPv6/AAND consists of three topologies technique.
In these different multi-homing situations, it is assumed that the localized routing route between MN and CN is already provided via the MAG address which is present in the same local mobility domain (LMD).

The MN and the CN are annexed to the same MAG in Topology 1. The localized path between MN and CN has already been established. The packets are now being translated from MN to CN. If the MN and CN interface is modified, then the AAND fields hold the connection layer identifier (LL-ID) information, and those fields make the MN mobility continuous. Figure 6 displays the PMIPv6/AAND Multihoming Topology 1. 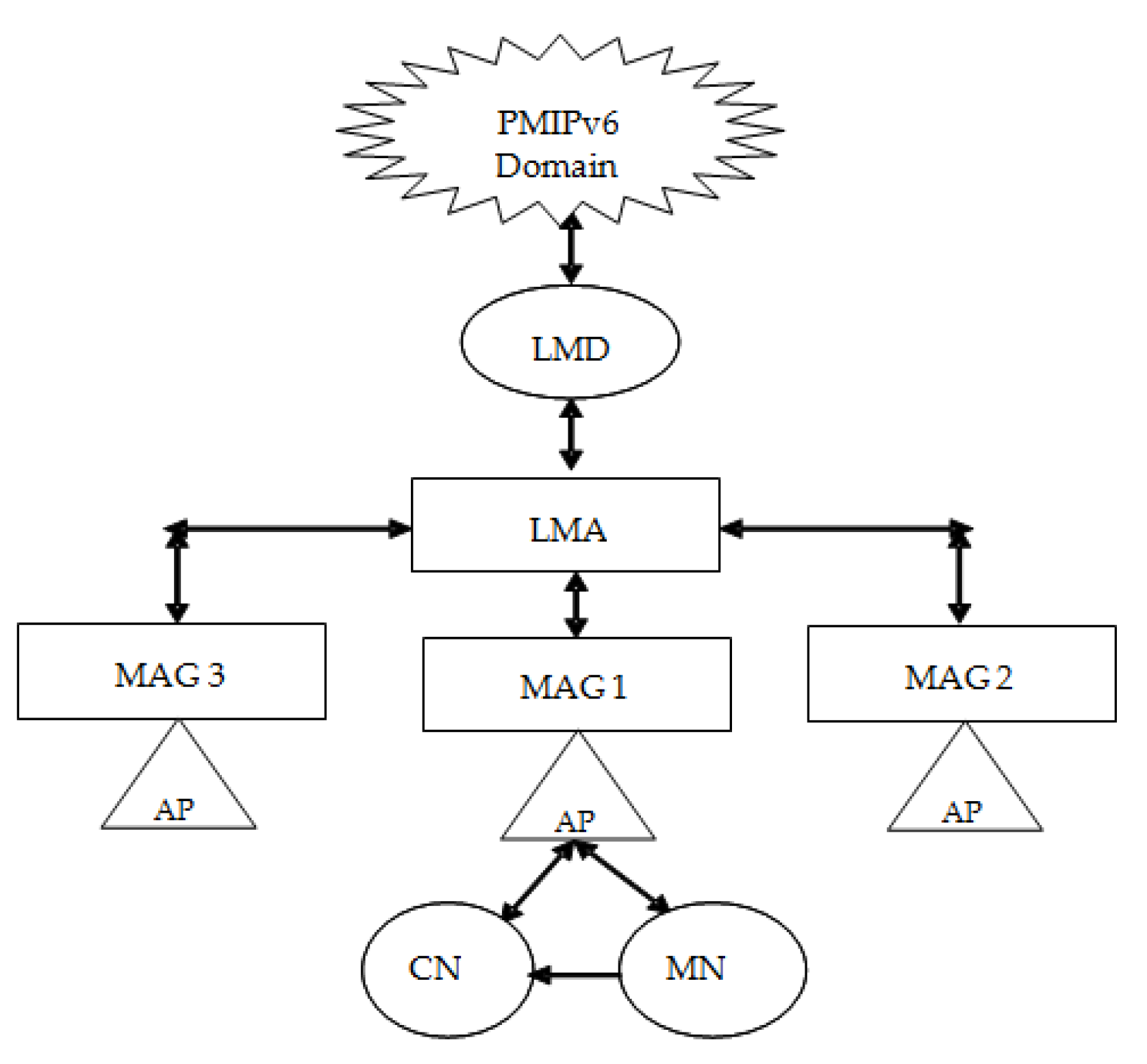 Now the MN is linked to MAG1, and the CN to MAG2. The MN then shifts from MAG1 to MAG2. MAG1 is now known as P-MAG according to the CN. The P-MAG and the M-MAG are connected in Topology 2, to the same LMD. Now the packets are being moved via M-MAG from MN-CN. The handover between P-MAG and M-MAG occurs. The PBU list retains the P-MAG LL-ID using AAND fields when the MN changes its interface and allows for a successful mobility session. Figure 7 displays the PMIPv6/AAND Multihoming Topology 2. 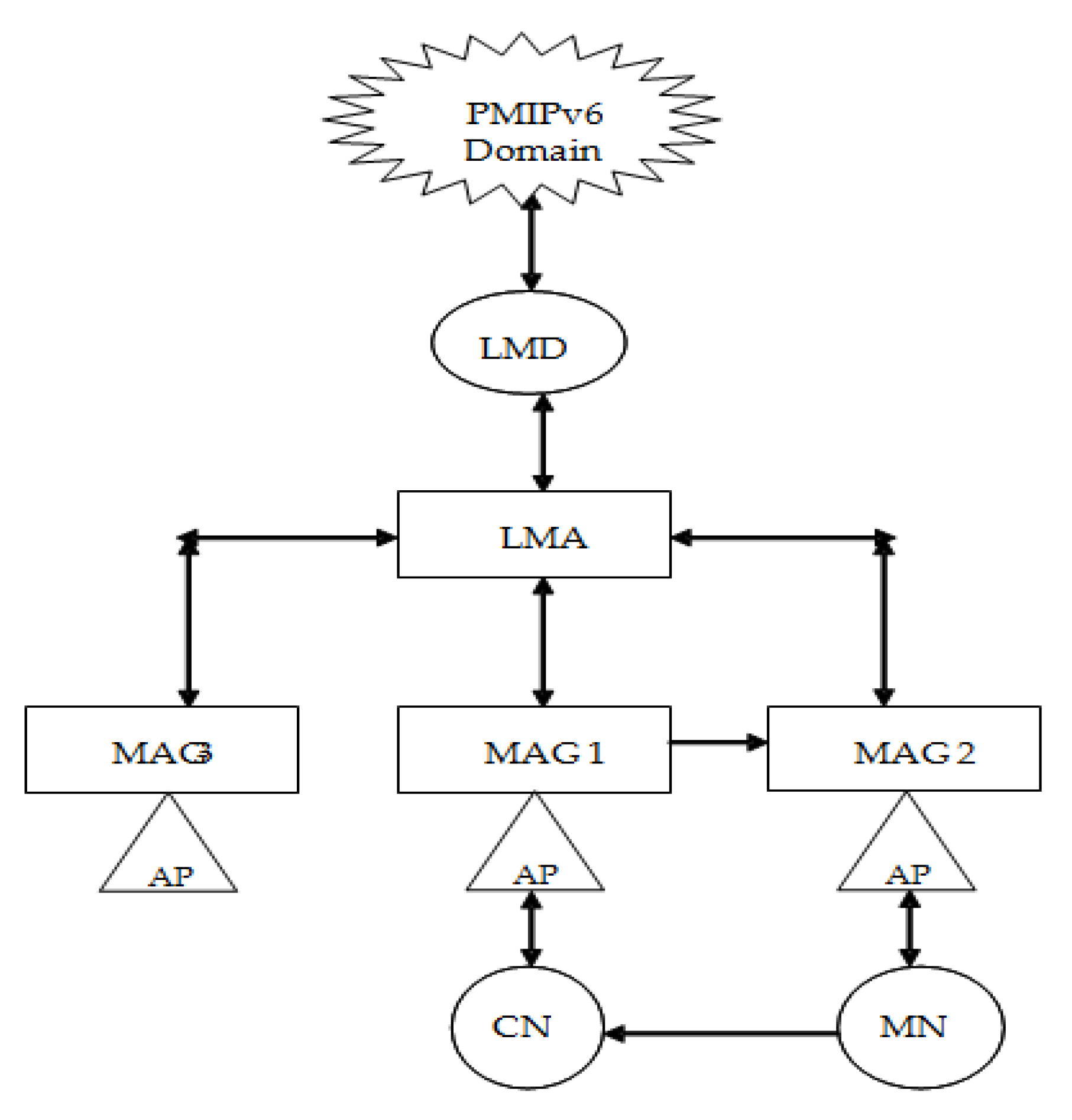 The MN is attached to MAG1 in this topology, and the CN node is attached to MAG3. The MN passes from MAG1 through MAG2 to MAG3. But between CN and MN, the LR path is created, and it is created only for the MAG concerned.
There is therefore a need for the re-establishment of a link between CN and MN with M-MAG, since there is another new MAG, i.e., MAG2 is inserted into the domain. The SAND field also provides the LL-ID information of the mobility with the MN-ID in Topology 3. Figure 8 displays the PMIPv6/AAND Multihoming Topology 3. 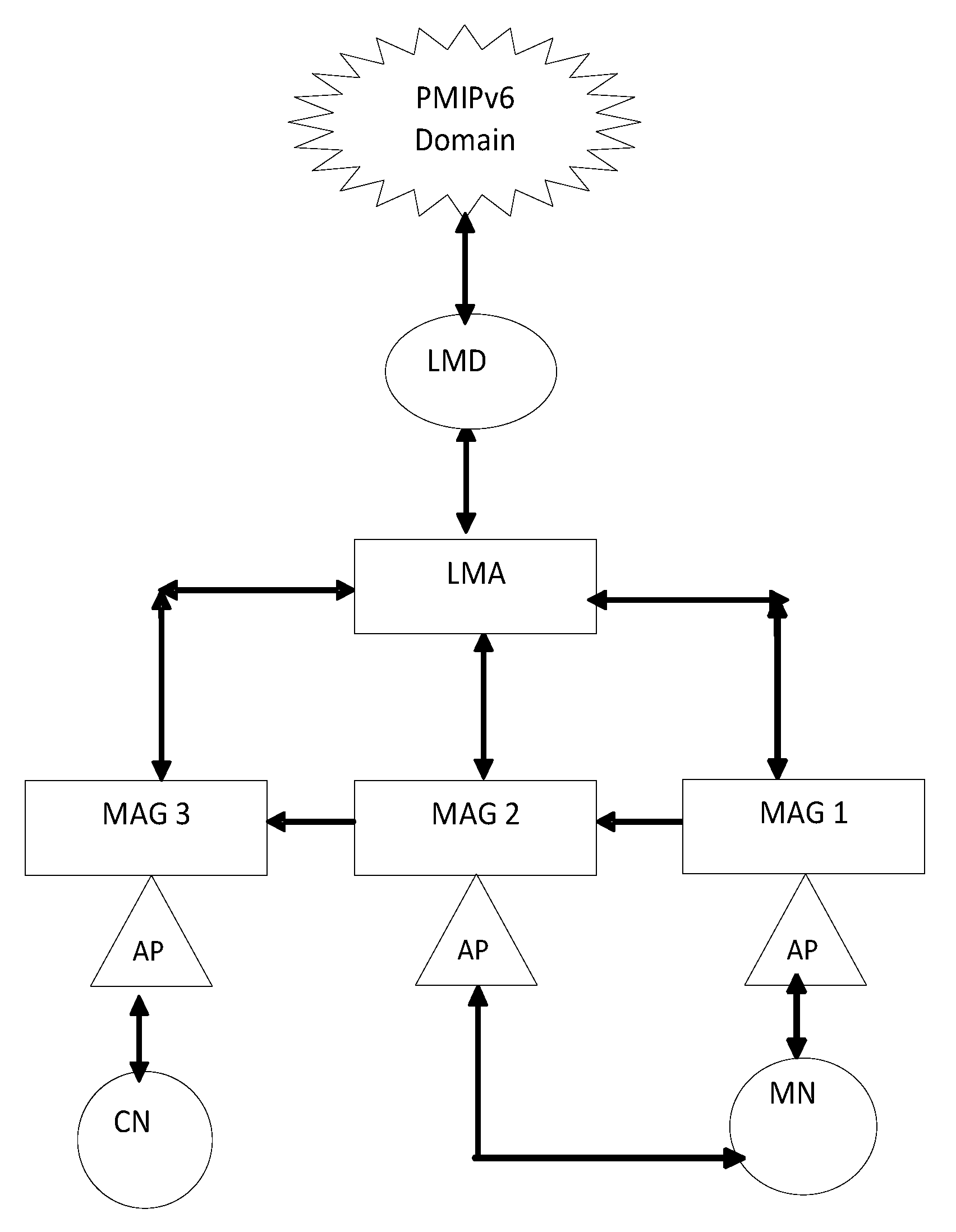 According to the steps given below, the signal flow is carried. Figure 9 outlines the PMIPv6/AAND principle of regular signal flow. 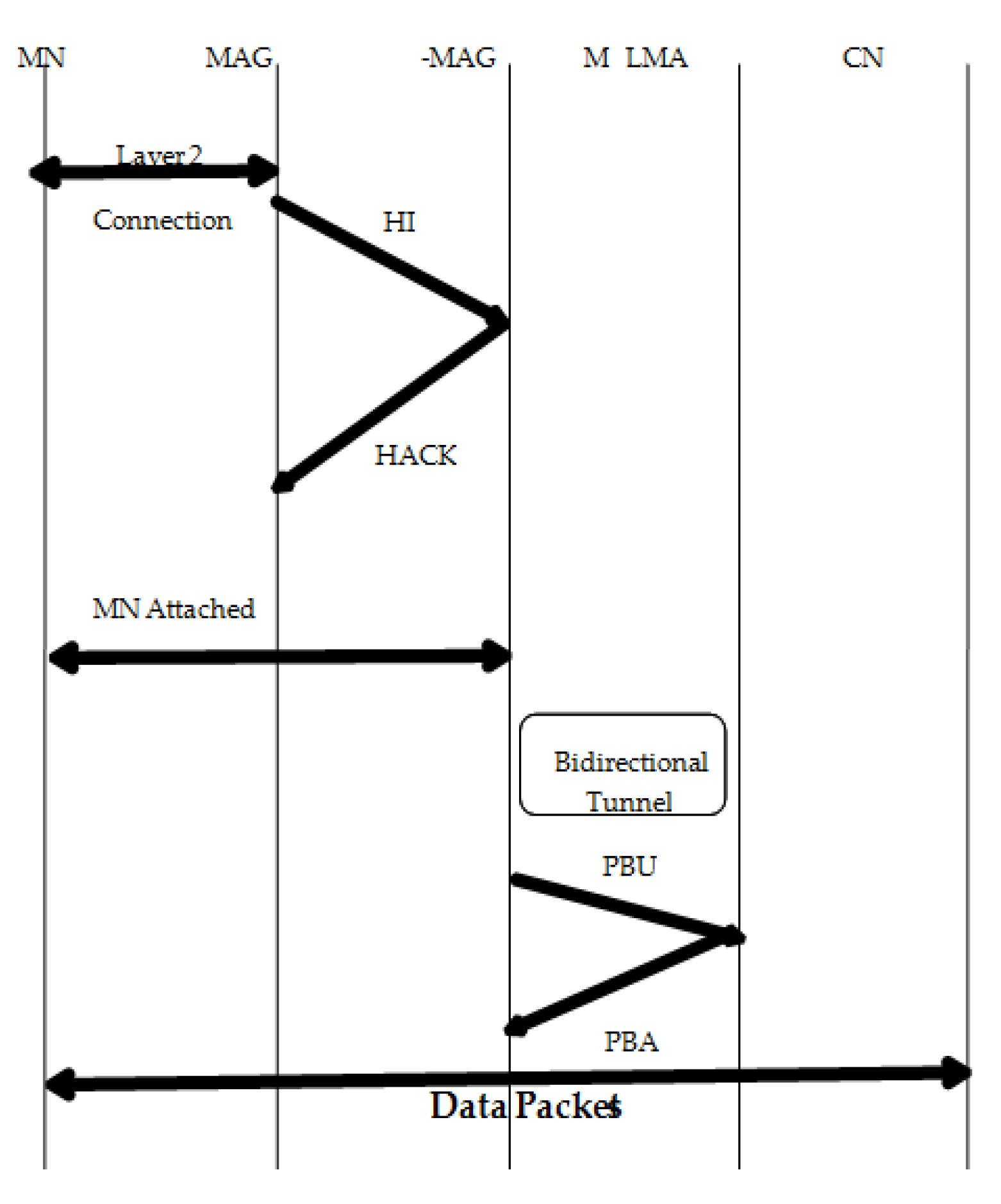 In the PMIPv6/AAND, every interface has its own neighbor cache (NC). Every IP address in the connection, along with its VIs and concerned LL-ID in the concerned network, is maintained by the NC. By setting the flag value as’ 1’ when the VI receives a neighbor solicitation (NS) message, it is received by the VI because the new field value is assigned by ‘1’. The neighbour advertising (NA) is responded to by the concerned VI with its LL-ID. Figure 10 explains the proposed method virtual interface concept. 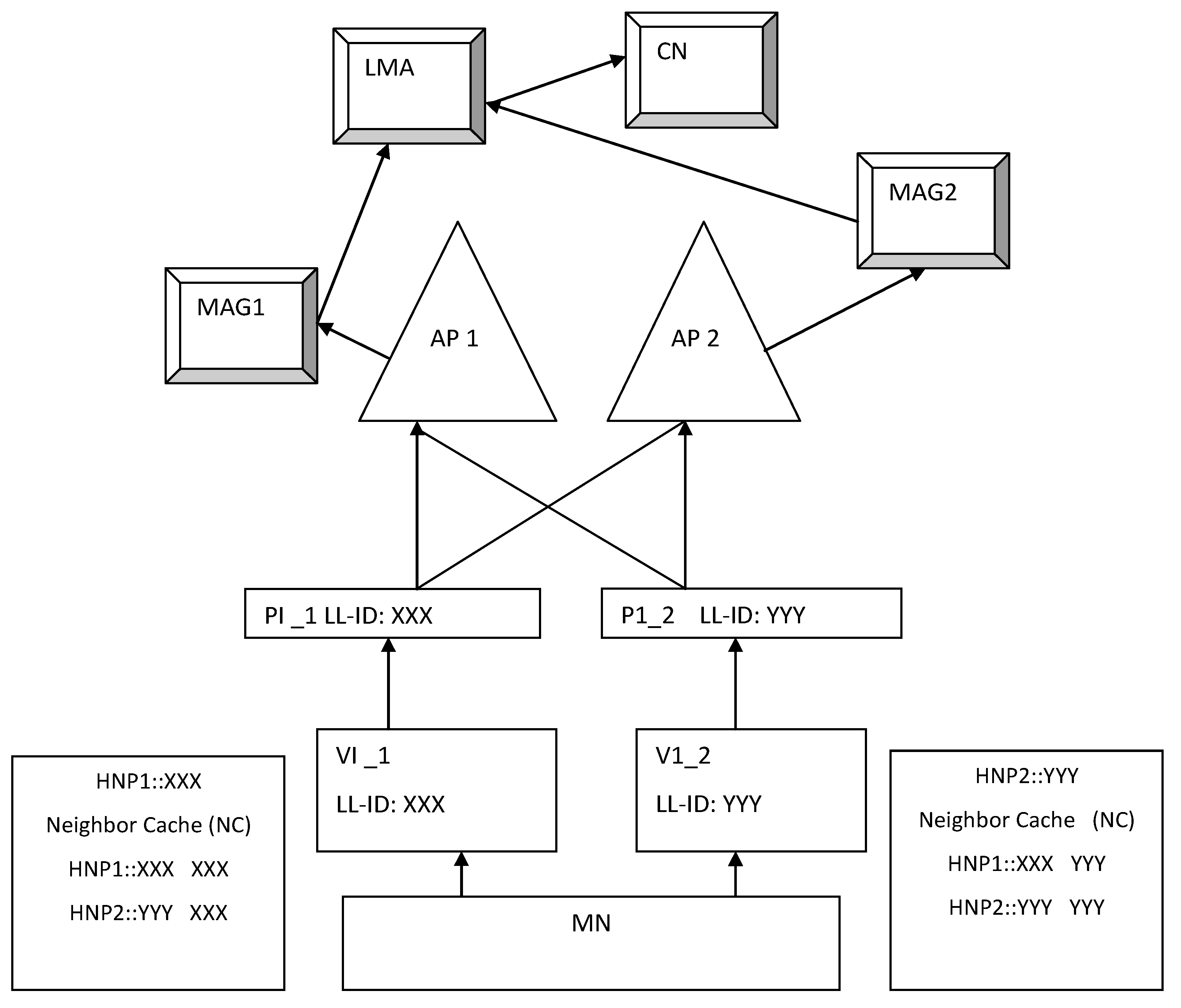 Based on the outcome of the projected performance, PMIPv6/AAND powerfully assists multi-homing mechanisms based on MVI using its AAND fields and various topologies. The AAND fields ‘D’ and ‘R’ preserve the multiple virtual interface information and successfully diminish the latency of the handover. The handover simulation outcomes illustrate that the PMIPv6/AAND affords superior performance, such as decreased handover latency, throughout the mobility of MN. The comparative study shows that the time delay of the handover in PMIPv6/AAND is condensed in comparison with the existing PMIPv6 protocols. The proposed technique can extend the support for software defined networks.