Brassica vegetables and their components, the glucosinolates, have been suggested as good candidates as dietary coadjutants to improve health in non-communicable diseases (NCDs).

Nowadays, the incidence of non-communicable diseases (NCDs), including obesity, diabetes, cancer, and other chronic conditions, is increasing and showing high mortality indexes worldwide (https://www.who.int/nmh/topics/es/). These diseases are multifactorial, but it has been described that lifestyle, such as smoking or sedentary life, contributes to the prevalence of the NCDs. As a result, different prevention strategies have been developed, mainly the promotion of healthy habits, recommending avoiding a sedentary life, quitting smoking and the consumption of alcoholic drinks, and keeping a healthy diet [1]. To emphasize the importance of these strategies, it has been proven that these habits have an important role in the prevention of cardiovascular diseases and type-II diabetes [2].
Since one of the main points of intervention for a healthy lifestyle is diet, global health recommendations are always encouraging the message of eating a minimum of five portions of fruits and vegetables daily [3][4]. Vegetables are not only a natural source of amino acids and minerals, but also of phytochemicals [5]. In particular, cruciferous vegetables, like broccoli, cabbage, red radish, or Brussels sprouts, are consumed worldwide not only because of their culinary value being popular in many countries with plates being part of the culture legacy, but also because of their diverse content in phytochemicals with high health-promoting benefits [6][7]. Between them vitamin C, polyphenols, and minerals can be found. However, one of the most relevant biomolecules are glucosinolates (GSLs), mainly found in plant species and varieties of the order Brassicales, mainly Brassicaceae as the most well-known representatives of this horticultural, botanical, and socioeconomically relevant botanical family [8]. They consist of a basic structure of a thiohydroximate-O-sulfate group with a glycosylation and, depending on which amino acid they are derived from, a different side chain [8]. GSLs are stable secondary metabolites, but after tissue disruption, they are hydrolyzed by the enzyme myrosinase (EC 3.2.1.147), generating different GSL hydrolysis products (Figure 1) including bioactive isothiocyanates (ITCs) if the pH is 5–8, in the range of neutrality. In some plants, epithiospecifier proteins exist and can modify the outcome of the hydrolysis process, typically to promote other products than ITCs, as it is the case of nitrile specifier protein originating simple nitriles and elemental sulfur [8][9][10]. On the other hand, the epithiospecifier proteins (ESP) with similar function may also carry out a different reaction for the few aliphatic GSLs with a terminal double bond by adding the sulfur to this bond, forming an epitionitrile. The production of thiocyanates is produced at pH > 8, and oxazolidine-2-thiones can be formed if a hydroxyl group is present on carbon 2 (beta position) of the glucosinolate [10][11]. 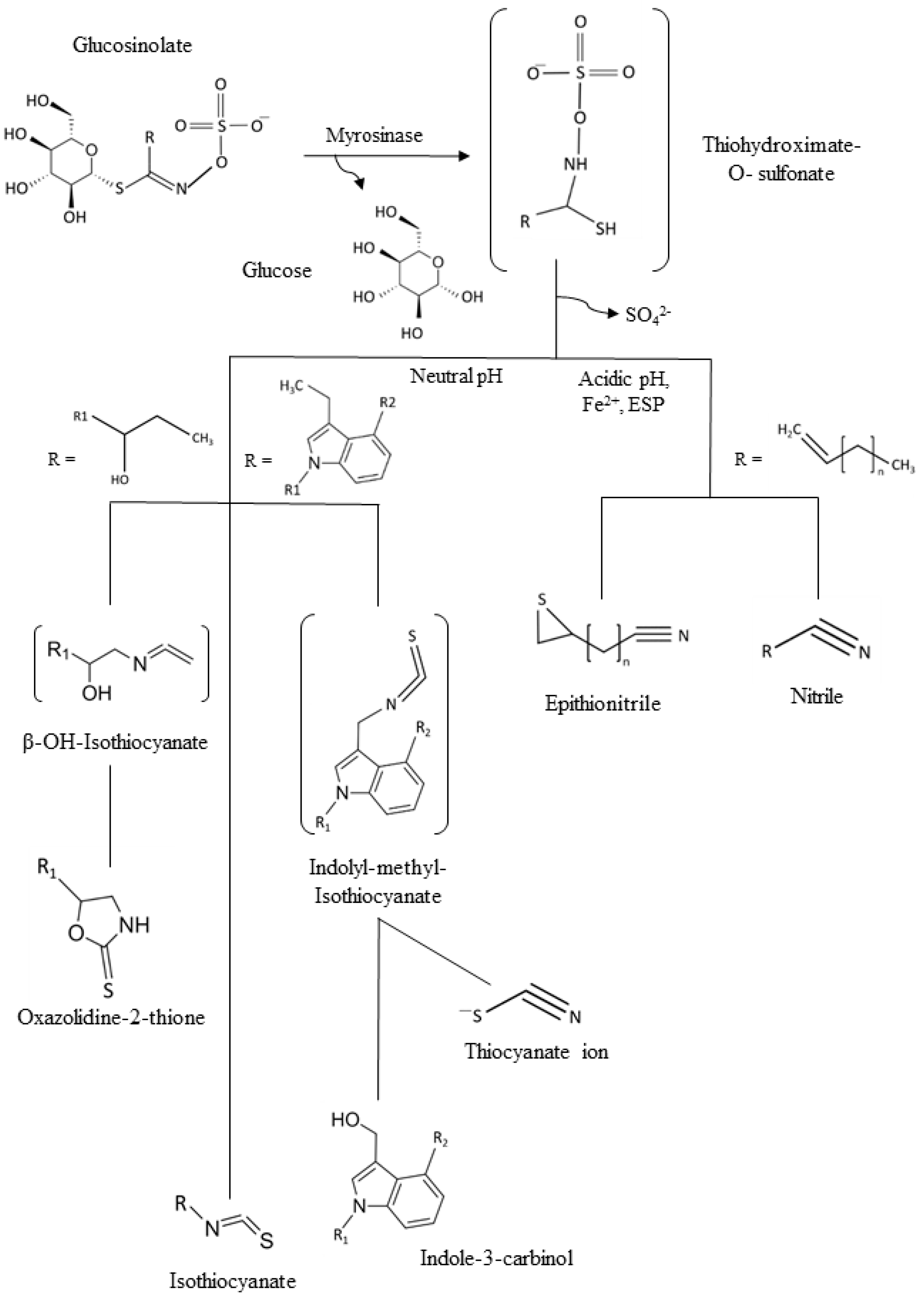 Figure 1. General scheme of the glucosinolates (GSLs) and common hydrolysis products. ESP: Epithiospecifer proteins.
All these studies performed in vitro suggest that cruciferous vegetables mainly from Brassica spp. (either as foods or ingredients rich in bioactive substances) are good candidates as dietary coadjutants to improve human health in NCDs. As a consequence, some clinical and pre-clinical studies have been developed during the last six years. Epidemiological studies have linked the intake of GSLs with the risk of coronary heart disease or type 2 diabetes [12][13]. Nevertheless, this information from large cohorts is usually based in food frequency questionnaires, making it difficult to know the specific effects of the GSLs in the intake.

2. The Clinical Evidences of Health-Promotion with Brassica Bioactives from a Critical Point of View

Within the short-term studies, we found two documents on prostate [14] and melanoma [15], three papers on respiratory pathologies [16][17][18], and one on type 2 diabetes [19]. The main limitation observed in these studies is the length or duration of the study, of 1 month or less, because the validity of the data in terms of changes in bioavailability of the intake of compounds could be acceptable, but for the evaluation of data from tissues, the time of exposition is too low. In the article of Gee et al. [14], a Phase Ib study, studied the concentration of DIM in prostate tissue after its administration in three groups: 200 mg, 400 mg, or placebo. They found a positive increase of DIM in plasma, but not concomitant or related with the presence of DIM in the prostate tissues, and the initial hypothesis was not corroborated. On the other hand, the urinary 2/16-hydroxysterone increased significantly by 68% (p = 0.030) in the group administrated with 400 mg of DIM. The levels of PSA taken separately, were also non-significant, but comparing between the group of 400 mg versus placebo, the reduction was of 1.8 times (p = 0.1). The gene expression of the CYP1A1 in blood after 15 days in the Group of 200 mg was significantly reduced by 31% (p = 0.032) and more importantly for the reduction for the CYP2B6 was highly significant by 87% (p = 0.040).
In Tahata et al. [15], patients with more than two nevus or cell-proliferation structures of ≥4 mm Ø were selected and showed significant increases (ratio of concentration >1.5) in 14 out of the 92 proteins identified as tumor suppressors during the time of the study. On the other hand, it was not possible to relate the positive data on the significant reduction of proinflammatory cells such as IP-10, MCP-1, MIG, and MIP-1b to the supplementation of broccoli sprout extract (BSE) enriched in sulforaphane (SFN) because of different problems, such as reduced size in terms of number of participants, samples that were too small, and of a different nevus, which made the analysis difficult and induced higher inter-lesion variability. From the size of the nevus, it was not possible to obtain significant differences, only a general increase in size that was less patent in the patients treated with 100 µg BSE–SFN. Against these results it is worth highlighting that the changes in the size of the nevus in a period of one month are unusual and the comparisons between pictures depends in the illumination characteristic of the images, being unreliable data when analyzing the results. One of the strengths of this work actually are the improvements suggested for the future to use a different technique for the biopsies (in patch), to reduce the stress in the area of lesion, and to use a dermatoscope to substitute the pictures because of their great variability according to the illumination conditions.

The analysis of the articles of medium-length duration between 2 and 8 months indicated that three were dedicated to studies on cancer in different localizations, two studies were on prostate cancer, and one study was on breast cancer.
In both studies of Alumkal et al. [20] and Cipolla et al. [21], the main factor studied was the change in the PSA (prostate specific antigen) parameter. In their study, Alumkal et al. ambitiously established the objective of a reduction of 50% in the level of PSA after 20 weeks of intervention, an objective that was not achieved. The obtained reductions were significant and in the range of 3% to 20%. In both studies it was also positive to find an increased time for doubling the amount of PSA after the intervention was found (pre- and post-intervention in placebo from 6.1 to 16.6 months [20]; 9.6 to 31.9 months, in the treated group).
Cipolla et al. [21] were focused in the changes in PSA over time, which were not significant when adjusting the data to the months (m0, m1, m3, and m6); but, when eliminating the m1, the reduction was of 0.0180 ng/mL/month. Besides, the median of log PSA was 38.5% lower in the intervention group than in the placebo, and the progression of the PSA was by 71.8% in the placebo versus the 44.4% in the SFN-treated group. Looking into the changes of the phase II enzymes, the GSTM1, and the inhibition of the HDAC in the work of Alumkal et al. [20], non-significant differences were found. In both studies, the time for the intervention was similar, namely 20 and 24 weeks, respectively, but the amount of SFN was much higher in the work of Cipolla et al. [21], and that probably favored the better more encouraging final results in this study. In any case, Atwell et al. [22] planned to evaluate the efficacy of the consumption of the broccoli sprouts extract to modify the activity of the HDAC (histone deacetylase) and the breast tumor marker CA (carcinogenic antigen) in order to improve the diagnosis in women with benign disease and non-invasive CA. They proposed an intervention using six pills with a theoretical content of SFN of 30 mg in three administrations per day. A point in favor of this article is that they carried out an internal analysis of the composition of the capsules, and determined the total daily dosage of 224 mg of SFN instead of the declared 180 mg of SFN as designated by the supplier of the supplement. When evaluating the results, the levels of the HDAC before and after administration between groups were not statistically different. Only when comparing the two groups, treated and untreated, after the intervention was a significant difference observed, with a reduction in the HDAC in the group with the treatment. It should be noted that the authors also carried out a stratified data analysis considering the consumption of NSAIDs, using this variable as independent, and they found a significant reduction in the HDAC in the patients that were non-regular consumers of NSAIDs (p = 0.04), and it was not possible to find significant differences in the group of consumers of NSAIDs. Additionally, the biomarkers H3K18ac, H3K9ac, HDAC3, HDAC6, Ki-67, and P21 did not present statistically significant differences in the pre- or post-analysis. When comparing the levels of pre- and post-treatment within each group, a significant reduction was found in Ki-67 and HDAC3 in benign tissues in the SFN treated group, and a significant reduction of H3K9ac in the tissular DCIS in the placebo group. As a conclusion of this work, the authors did not plan as a hypothesis that the NSAIDs inhibited the synthesis of prostaglandins, and this could suppress the expression of regulator proteins through the involvement of the recruitment of the HDAC. The increased recruitment of the HDAC in the chromatin could prevent the inhibition associated with the consumption of SFN, and that could be a potential explanation for the observed data, and for the future studies using interventions with SFN, longer studies will be required to confirm these findings.