Pancreatic cancer is the most common lethal tumor in America. This lethality is related to limited treatment options. Conventional treatments involve the non-specific use of chemotherapeutical agents such as 5-FU, capecitabine, gemcitabine, paclitaxel, cisplatin, oxaliplatin, or irinotecan, which produce several side effects. The principal objective of nanoparticles is reduction of the side effects that conventional treatments produce, mostly because of their non-specificity.

Cancer is one of the major causes of death in the world. In 2020, the prevalence of new cancer cases was approximately 19.3 million, and the prevalence of cancer deaths was 10 million. Thus, there is a prime interest in researching new ways to fight cancer [1]. Research over time has associated the use of chemotherapy for cancer with several adverse effects, including the limitation that, while it inhibits tumoral cell growth, chemotherapy also damages healthy cells in the process [2]. Over the years, the biochemical and molecular understanding of cancer and chemotherapy agents has led to new technologies for cancer treatment. Some of these arising technologies use the application of therapeutic nanoparticles [3][4].
Nanotechnology can be described as the use of materials that have a diameter of 1–100 nm. Because of their substantially small size, nanomaterials may be formed by hundreds of millions of atoms [5]. Due to their high surface-to-volume ratio, the use of this type of carrier allows the delivery of small therapeutic biomolecules such as DNA [6], RNA [7], proteins [8], drugs [9], and other molecules to a specific tumoral site. Nanoparticles can be functionalized with some recognition molecules, such as antibodies [10] or aptamers [11], that can target the nanoparticle into the cancerous cells, avoiding the endocytosis into healthy cells. This targeting prevents toxicity to healthy cells and provides an efficient patient therapy [5]. Therefore, nanomedicine’s goal is to minimize adverse effects and enhance anticancer therapy. As shown in Figure 1, there are several types of nanoparticles, such as metallic nanoparticles, polymeric nanoparticles, liposomes, micelles, and carbon nanotubes [12]. Given their physicochemical and functional compositions, the properties of the nanoparticle may differ one from another, as it is shown in Table 1. The characteristics of the antineoplastic agent influence the design of the nanoparticle [13]. Hence, researchers worldwide have gained great interest in nanotechnology, as it may lead to better healthcare services and quality of life for cancer patients [12][13]. 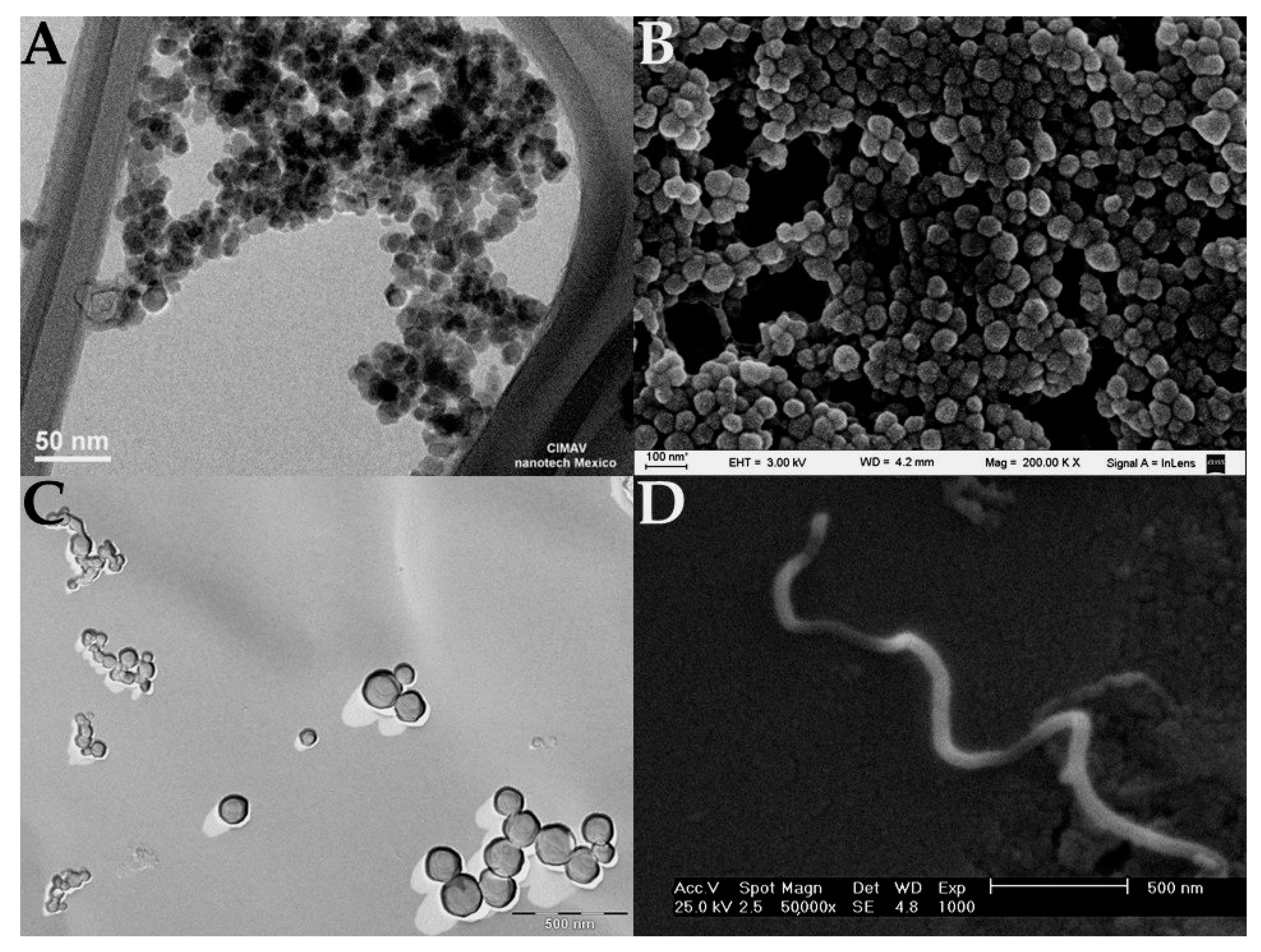 3. Nanoparticles as a Therapeutic Strategy in Cancer

Once nanoparticles are administered, they specifically focus and target cancer cells. These cells can then follow different strategies in order to be eliminated. The nature of the strategy depends on the design of the nanoparticle and the materials chosen for their construction. Some nanoparticles are made with highly biocompatible and biodegradable materials that function as a vehicle that carries a therapeutic agent [26]. These therapeutic agents can be a chemotherapeutics or biological molecules, such as a protein or a nucleic acid. Some other nanoparticles are built with specific materials such as metals, which produce heat or free radicals that eliminate cancer cells when they are excited with an external source of energy [27][28][29].

Chemotherapeutics can inhibit tumor growth or reduce metastasis. There are a lot of drugs that can be used as a cancer chemotherapeutic, but the problem remains as to whether these drugs are specific enough. Additional problems with chemotherapeutics include their poor aqueous solubility, non-specific distribution, fast elimination from blood circulation, and the development of drug resistance. To overcome these problems, modifications to the delivery has been seen as the best scenario. In Figure 2 we present how well-designed nanoparticle delivery strategies can help improve drug delivery [5][17][30]. 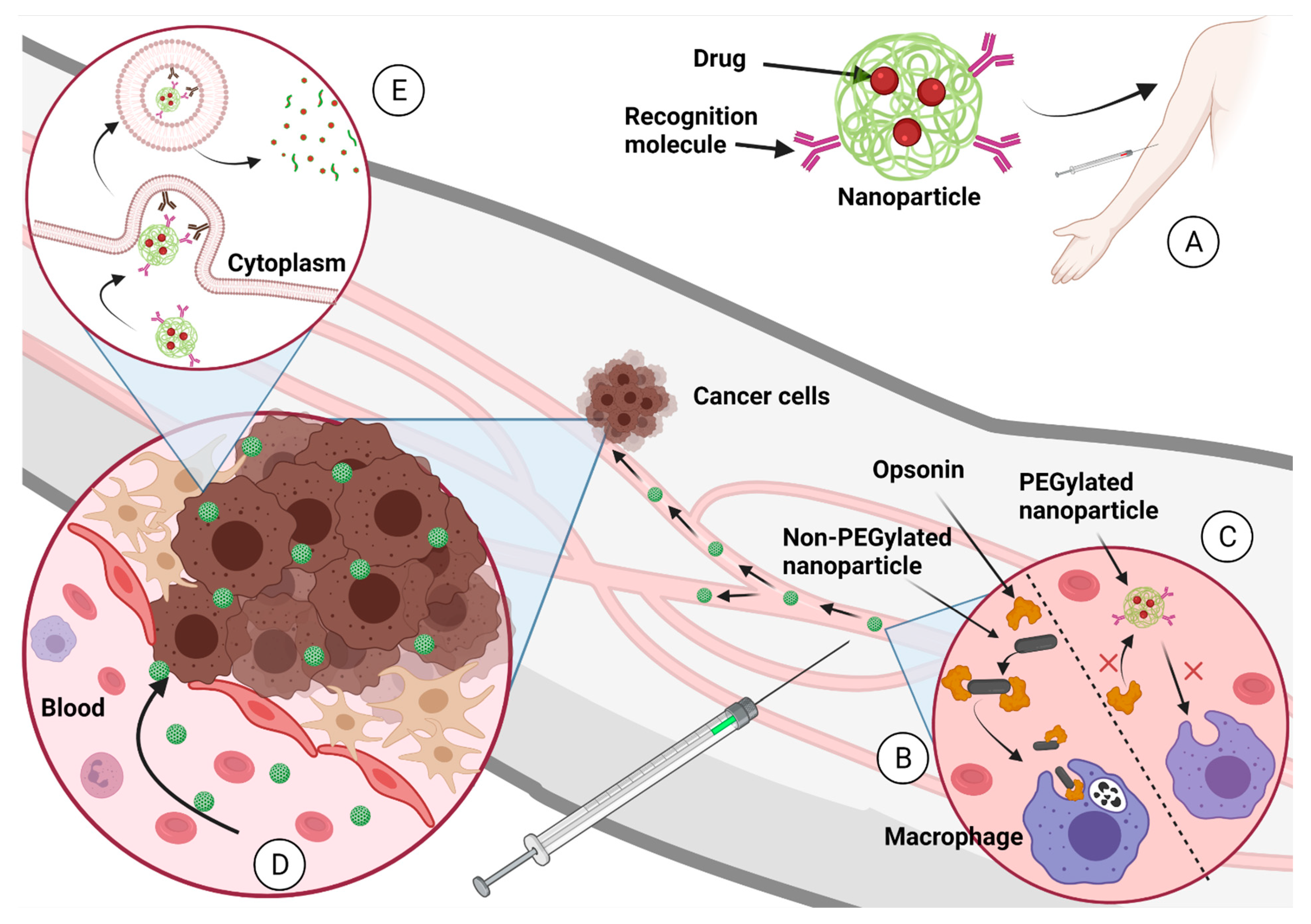 Figure 2. (A) The nanoparticle-carrying drugs are administered to the patient into the circulatory system. (B) Nanoparticles that are not designed properly can be eliminated by the macrophages after opsonization process. (C) Nanoparticles designed properly (PEGylated nanoparticles, for example) continue in blood circulation until they find the tumor. (D) The EPR effect propitiates the accumulation of nanoparticles in the tumor. (E) The recognition molecules over the nanoparticle surface target the membrane proteins from cancer cells and induce endocytosis. Once the nanoparticle is in the cancer cell cytoplasm, it degrades and delivers the chemotherapeutical to inhibit tumoral growth. Created with BioRender.com (accessed on 1 October 2021).

3.2. Nanoparticles as a Vehicle for DNA (Gene Therapy)

For cancer treatment, some nanoparticles are used as a vehicle for the delivery of DNA. This DNA can contain a gene sequence that expresses a protein than can “fix” the cancerous cell. However, the most-studied strategy is the administration of DNA that contains the sequence of a suicide gene that expresses a lethal protein that “kills” the cancerous cell. The killer proteins are proteins that induce apoptosis or necrosis in cancer cells [31].
A recent example of successful of targeting cancer cells has been described with particles delivering genes of the TNF superfamily. Protein expression of TNFα and DC95 has given good results causing necrosis in cancerous cells [3][32]. Another protein molecule from the same family is TNF-related apoptosis-inducing ligand (also known as TRAIL or TNFSF10) which is known to cause the death of cancerous cells without presenting secondary effects in the patient. Nanoparticles delivering plasmid DNA with the sequence of a suicide gene such as TRAIL, express the protein that causes apoptosis preferentially in cancer cells without affecting the healthy tissues, as shown in Figure 3. TRAIL protein is a transmembranal protein. Some proteases that involve cysteine protease activity can release the soluble fraction of TRAIL (sTRAIL) to the plasma. In an adult individual, the concentration of sTRAIL is approximately 100 pg/mL. At this concentration, the sTRAIL can induce apoptosis in most of the cell lines in vitro. The induction of apoptosis begins with the union of TRAIL with a specific receptor. TRAIL can bind to four different membrane receptors. When TRAIL binds with TRAIL-R1 or with TRAIL-R2, there is an induction of apoptosis. When TRAIL binds to TRAIL-R3 or TRAIL-R4, apoptosis truncates, and the apoptotic effect of TRAIL is stopped. All the TRAIL receptors are transmembranal proteins; TRAIL-R1 and TRAIL-R2 have an intracellular death domain (DD) responsible for inducing apoptosis. TRAIL-R3 lacks an intracellular domain, which is why there is no apoptosis induction. TRAIL-R4 induces other cellular pathways different from apoptosis (NF-κB activation). The apoptosis activated by TRAIL-R1 and TRAIL-R2 is mediated by the activation of caspases, principally caspase 3. TRAIL has provided good results in preclinical studies in mice as a cancer therapeutic against cancer cells which overexpress TRAIL pro- apoptotic receptors. There are still some challenges in developing the half-time circulation in blood and delivery in targeted cells. Some authors propose the use of nanoparticles to improve the delivery of TRAIL [33][34][35][36]. 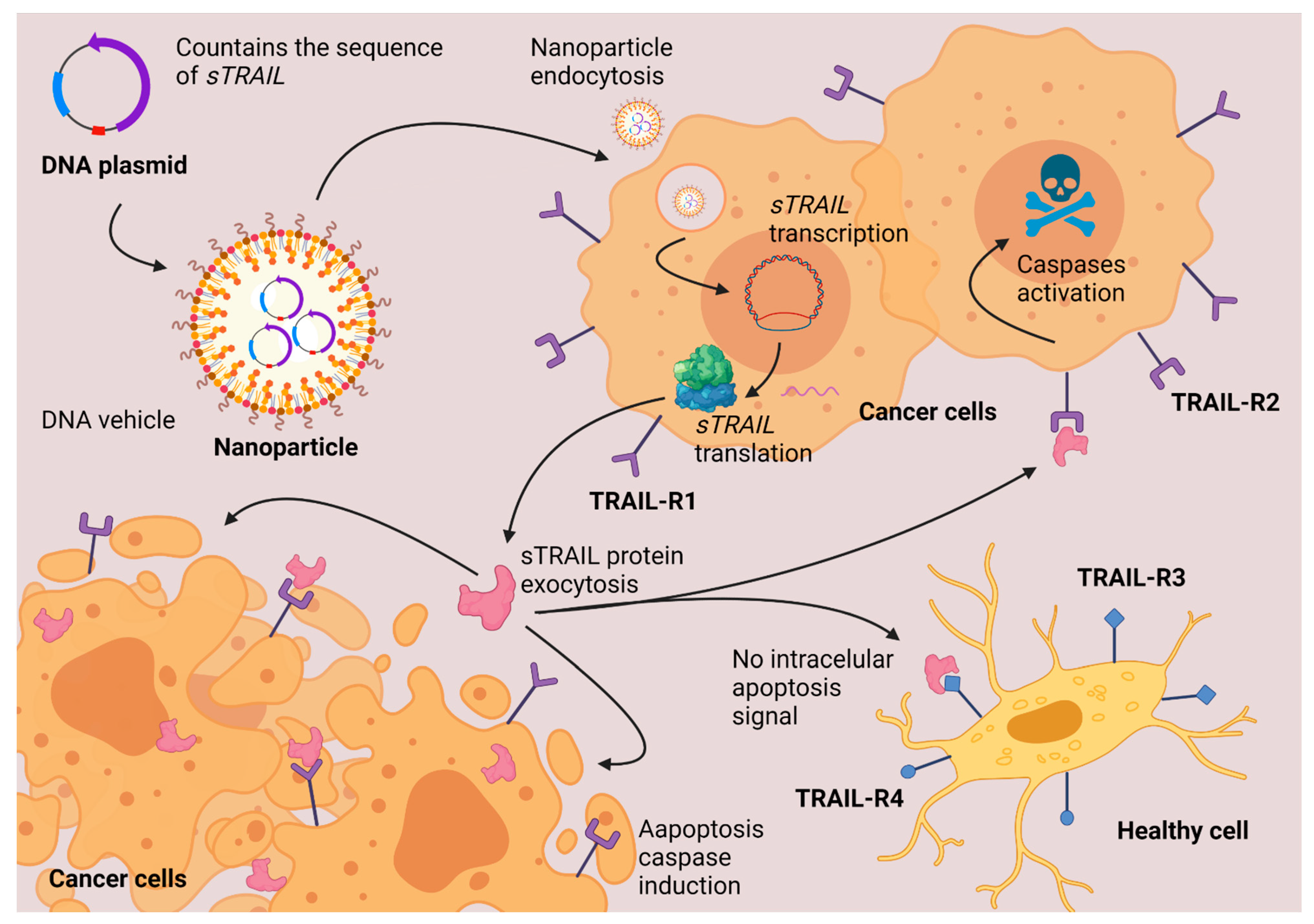 Figure 3. TRAIL gene therapy. Nanoparticles deliver the DNA inside the cells. The cells synthesize a soluble fraction of TRAIL protein. TRAIL induces apoptosis via caspases activation only in cancerous cells that overexpress TRAIL-R1 and TRAIL-R2 protein-membrane receptors. Created with BioRender.com (accessed on 1 October 2021).

3.3. Nanoparticles as a Vehicle for RNAi (Gene Therapy)

In cancer cells, some DNA sequences such as oncogenes, chromosomal rearrangements, insertion mutations, point mutations, and gene amplification express messenger RNA (mRNA) that generate a cancerous phenotype. RNA interference (RNAi) technology, as shown in Figure 4, can effectively inactivate mRNA. Nanoparticles can administer RNAi into cancer cells in a similar fashion to how they deliver other genetic material. 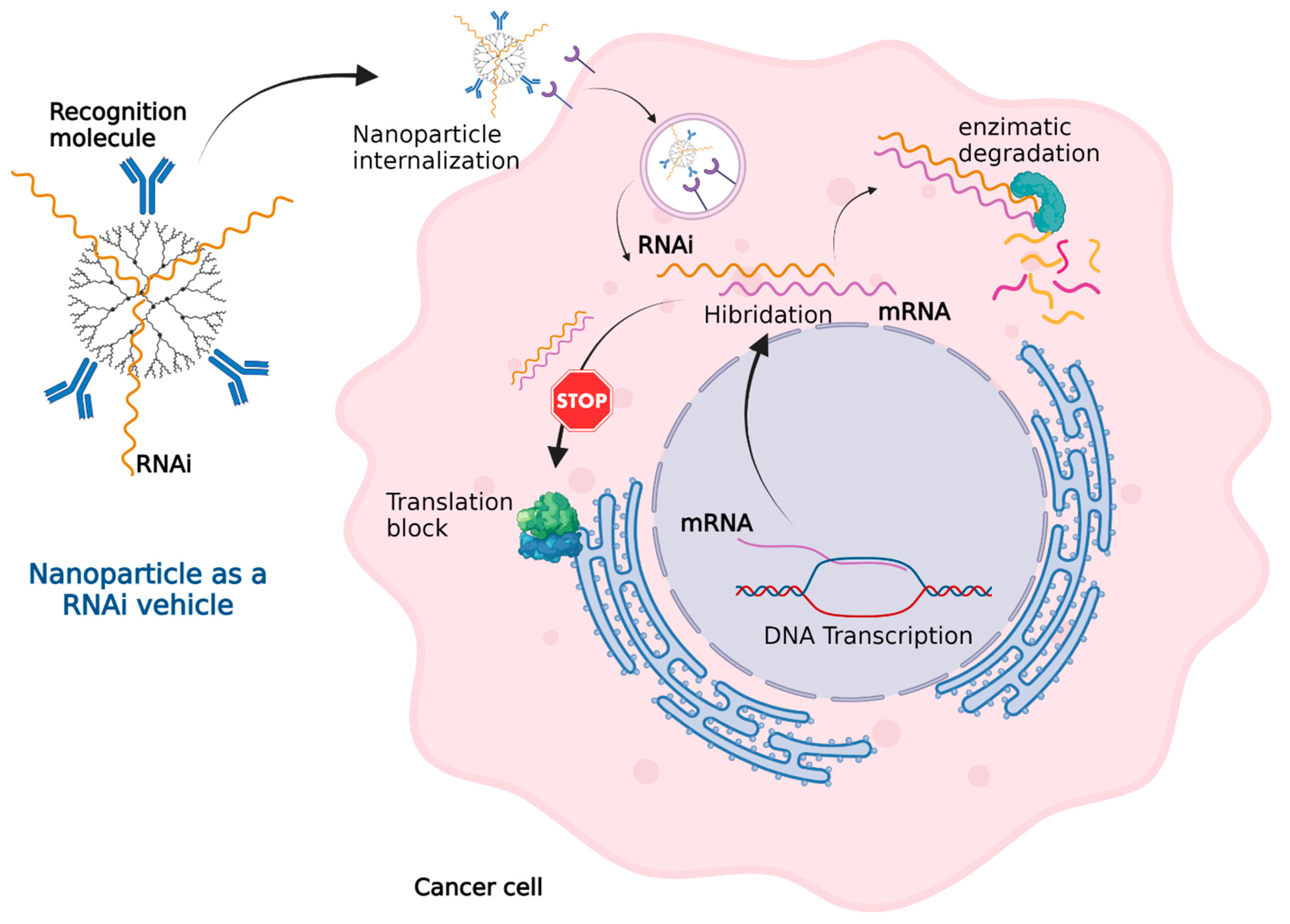 Figure 4. Nanoparticles as an RNAi vehicle. The RNAi–mRNA complex structure can be recognized by degradation enzymes and cannot be read by the ribosomes for translation. Created with BioRender.com (accessed on 1 October 2021).
The RNAi sequence is designed to be complementary with the mRNA that needs to be inactivated. The mRNA from the cancer cell generates a complex with the synthetic RNAi. This mRNA–RNAi complex cannot be read by the ribosomes blocking the translation or even recognized by enzymes leading complex degradation. The mRNA inactivation leads to the inhibition of tumoral growth, invasion, or migration. RNAi technology in combination with traditional chemotherapy can improve the treatment of cancer [21][37][38][39].
Targeted therapies that directly block specific oncogenic pathways in PDAC progression have so far played a limited role in the treatment of this disease. Multiple signaling pathways are affected in pancreatic cancer and can serve as therapeutic targets. Some approaches have focused on the main genes that are associated with the initiation, maintenance, and progression of PDAC, such as the common mutations on KRAS (>90% of all the PDAC cases), TP53 (64%), CDKN2A (17%), and SMAD4 (21%), which are mutated in a large percentage of patients with this type of cancer [40][41]. In 2019, Mehta evaluated bovine serum albumin nanoparticles for the delivery of RNAi targeting KRAS G12S mutation [32]. KRAS is activated when linked to GTP and deactivated when linked to GDP. The intrinsic cycle of KRAS GTP–GDP is regulated by guanine-nucleotide-exchange factors (GEF) that stimulate nucleotide exchange and GTPase-activating proteins (GAP) that accelerate the intrinsic hydrolysis activity of KRAS GTP. KRAS was the first candidate target to treat PDAC. These mutations have therapeutic implications, especially since the targets are multiple, whether at the genetic level per se, during their post-translational maturation, in the interaction with nucleotides, or after the activation of the nucleotides. Once the KRAS protein is bound to GTP, it interacts with over 80 downstream effector proteins and signaling pathways, such as mitogen-activated protein kinase (MAPK), MAPK kinase (MEK), phosphoinositide 3-kinase (PI3K), AKT, the mechanistic target of rapamycin (mTOR) or rapidly accelerated fibrosarcoma (RAF), or extracellular signal-regulated kinase (ERK). Each of these KRAS effectors has been proposed as a therapeutic target to regulate PDAC progression. In addition, targeted therapies that the United States Food and Drug Administration (FDA) has approved as treatments for pancreatic cancer include epidermal growth factor receptor (EGFR/ErbB) inhibitors and tyrosine kinase inhibitor (TKI) [40][41].
On the other hand, in vivo administration of nucleic acids (DNA or RNA) is still a challenge due to short blood circulation. Enzymes degrade nucleic acids delivered directly in blood. Different materials are used for the construction of nanoparticles for nucleic acid delivery. Cationic charged polymers are used for carrying the anionic charged nucleic acids [20]. Polyethylenimine (PEI) shows high in vitro transfection efficiency, but it has a lot of problems in in vivo administration because of toxic behavior and a lack of stability [42]. An alternative is to conjugate different materials to improve their deficiencies. For example, PEI can be conjugated with PEG to reduce PEI toxicity [43]. Other cationic polymers that can be used are poly-L-lysine (PLL) [44], chitosan, hyaluronic acid [45], alginate [46], and poly(lactic-co-glycolic acid) (PLGA) [47]. Another cationic material that can be used for nanoparticle synthesis is lipids. They can form liposomes, micelles, emulsions, or solid lipid nanoparticles [48]. Some inorganic substances also can be used for nucleic acid delivery, such as mesoporous silica nanoparticles [49], carbon nanotubes [50], and metallic nanoparticles [51]. Inorganic materials can also be combined with cationic polymeric materials to improve their proprieties [20].

Some nanomaterials, such as gold nanoparticles and carbon nanotubes, can absorb near-infrared (NIR) light at 650–900 nm and convert it to heat. Tissues poorly absorb NIR light, so it is not dangerous. Other materials, such as magnetic materials, can generate heat when exposed to an alternating magnetic field (AMF). This heat cannot hurt healthy cells, but tumor cells are heat-sensitive. As is shown in Figure 5, the heat produced by nanoparticles can destroy cancer cells by eliminating tumors and suppressing distant metastasis. Photothermal therapy, in combination with chemotherapy and radiation, can improve cancer therapeutic outcomes [5][17]. If carbon nanotubes are used in this therapy, they need to be combined with other materials to avoid problems associated with the use of carbon nanotubes—poor solubility in water, low biodegradability and dispersity, toxicity problems, and possible effects in the proteome and genome [24]. Another variation of this therapy is the photodynamic therapy, which needs molecular oxygen (O2). The nanoparticle exposed to the light generates photodynamic reactions that eliminate cancerous cells without causing harm to healthy cells [52]. 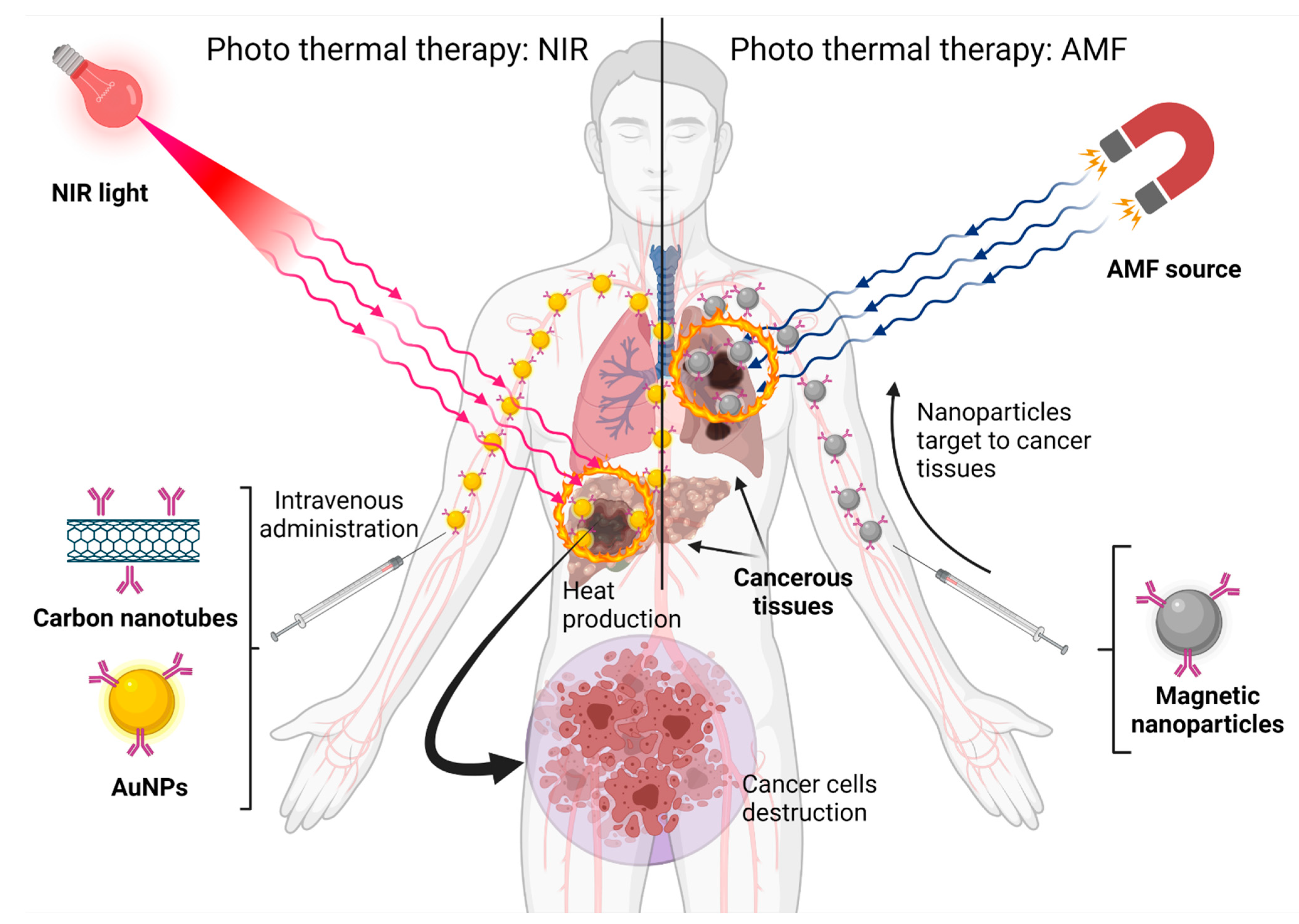 Figure 5. Nanoparticles built with different materials can be exposed to different energy sources and produce heat to eliminate cancer cells. Created with BioRender.com (accessed on 1 October 2021).