Tuberous sclerosis complex (TSC) is an autosomal dominant genetic disease featuring localized uncontrolled growth of tissues, known as hamartomas, in many organs, including the central nervous system (CNS). A large proportion of the cases are sporadic mutations (ca. two thirds). The disease results from a loss-of-function mutation in either the TSC1 or TSC2 gene, which encode for hamartin and tuberin proteins, respectively; two proteins that together form the Tsc1–Tsc2 complex. This complex, which is the converging center of several signaling pathways, has GTPase activity and can inhibit the activity of Ras homolog enriched in the brain (Rheb). The complex itself is modulated by phosphorylation via, for example, Akt or AMPK (Figure 1).

The mTOR protein itself is a serine/threonine kinase which acts as an integrator of various signals belonging to different modalities, related for example to the energetic status of the cell and the availability of growth factors and nutrients, and regulates the growth program of the cell [1]. Activation of mTORC1 leads to phosphorylation of its main downstream targets (including 4e binding protein 1 and S6 kinase), which control local protein synthesis, cellular growth, and autophagy [2]. mTORC2, instead, mostly regulates actin cytoskeleton dynamics via PKC or small GTPases of the Rho family. Albeit the role of mTORC2 in other diseases featuring mTOR hyperactivation is becoming more prominent, in TSC its contribution remains elusive [3].

Homozygous mutations in either Tsc1 or Tsc2 are not viable [8][9]. Heterozygous Tsc1 and Tsc2 mice do not display brain lesions, and Tsc2+/− rats feature cortical tubers, albeit with low incidence [10][11]. No spontaneous seizures were detected in these models, beside in Tsc1+/−, which undergoes a transient period of epileptiform activity at young age [12]. While all three models present with varying degrees of behavioral and cognitive deficits [13][14][15][16][17][18][19][20], their relationship with the rich variety of manifestations observed in ASD and TANDs symptoms in humans is not necessarily straightforward.

Pharmacological induction of seizures during early developmental stages (P7 and P14) in WT rats causes the appearance of social interaction deficits at 3 to 6 months of age. These results suggest that both haploinsufficiency of Tsc2 without epileptic activity and transient epileptic seizures during early postnatal development can lead to ASD symptoms in later life [19]. 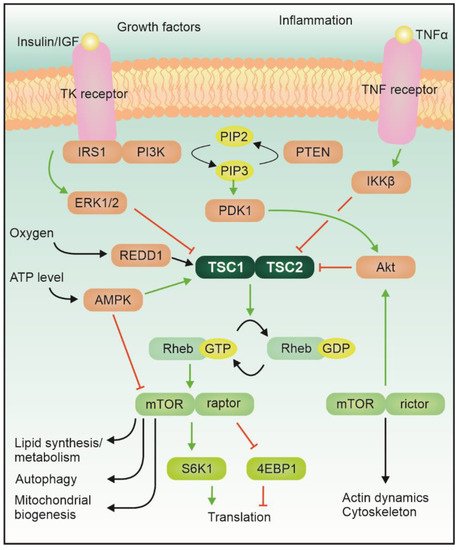 Figure 1. mTOR signaling pathway. Graphical depiction of the main upstream regulators of Tsc1–Tsc2, as well as how it can influence the mTOR pathway. For details see text.

As Tsc1–Tsc2-mediated changes in mTOR activity affect both axon formation and guidance, i.e., the presynaptic site, as well as spine shape and stabilization, i.e., the postsynaptic site, one can expect that Tsc1–Tsc2 deletion can influence synaptic transmission.

Pyramidal neurons in the medial prefrontal cortex (mPFC) of Tsc2+/−mice demonstrated no difference in the amplitude of AMPA-mediated mEPSCs as compared with controls, while mEPSC frequency was increased at P15–P40, suggesting a potentiation of glutamatergic drive in this mouse model [21][22]. In contrast to the mPFC, a decrease in both mEPSC amplitude and mEPSC frequency has been reported in the somatosensory cortex of Tsc2+/−mice around P15. At the same time, eEPSC amplitudes were not significantly different, indicating constant strength of the glutamatergic drive [23].

Activation of both NMDA and mGluR receptors can contribute to induction of long-term potentiation (LTP) and/or long-term depression (LPD), and indeed changes in synaptic plasticity were reported in Tsc1–Tsc2 deficient mice and rats. Levels of both LTP and LTD induced in acute slices by different stimulation patterns were significantly reduced in Tsc2-deficient rats [24]. Interestingly, using the same mouse model, Ehninger and colleagues reported no change in paired-pulse plasticity and early-LTP strength, but the level of late-LTP induced via tetanic stimulation was higher in Tsc2+/−mice as compared to controls [15]. As for the changes in glutamatergic synaptic transmission, also plasticity shows a complex picture of developmental and region-specific regulation.

An increase in excitation could have similar functional consequences as a decrease in inhibition, i.e., leading to increased noise in key circuits responsible for computation [25]. In mice with selective genetic inactivation of Tsc1 in a subset of hippocampal CA1 neurons in vivo featured strongly elevated mEPSC frequency [26]. The Tsc-deficient cells however displayed reduced intrinsic excitability which could effectively shunt the effects of increased excitatory synaptic transmission on the network activity. Based on this, the authors proposed that the increased glutamatergic synaptic transmission could have actually been a secondary effect, and the observed increase in the E/I ratio reflected rather a reduction in inhibitory transmission, showing how increased activity in mTOR pathway can lead to a cascade of changes and consequent adjustments [27].

Using electrophysiological recordings of postsynaptic currents functional I ratio was elevated in the mPFC, but arising from selective potentiation of glutamatergic transmission [21]. In contrast to the hyperexcitability observed before P19 in Tsc1+/−mice [12], sensory-evoked spiking was not increased in Tsc2+/−mice. The elevated E/I ratio might represent a compensatory tuning to stabilize the neuronal network [23].

As extracellular GABA concentration is regulated locally by GABA transporters, astrocytes could play a pivotal role in the tonic modulation of glutamatergic and GABAergic synaptic transmission. In fact, WT neurons cultured in astrocyte-conditioned medium of astrocytes derived from TSC-patient stem cells showed an increased number of GABAergic synapses [29]. For instance, deletion of either Tsc1 or Tsc2 in differentiated astrocytes did not produce tuber-like lesions (and nevertheless resulted in seizures), but inactivation of Tsc1 or Tsc2 in undifferentiated radial glia cells early during development resulted in phenotypic neuropathological features characteristic for TSC patients, including aberrations in cortical cytoarchitecture as well as epileptic seizures ([30], for review [31]).