Currently, about 200 Mt/y of ammonia is manufactured globally [1], making it the world’s second most commonly produced chemical after sulfuric acid (H2SO4). Similarly to hydrogen, ammonia can be produced from different primary energy sources, including biomass, coal, natural gas, solar, wind, geothermal, hydro and nuclear sources. Ammonia can be produced through different conversion technologies: thermochemical, electrochemical, photochemical and plasma [2]. However, with the consideration of technological feasibility and total energy efficiency [3][4], in this work, three main conversion technologies (Haber–Bosch, electrochemical and thermochemical cycle processes) are described. Furthermore, recent trends in the development of enhanced systems in order to improve the total energy efficiency during ammonia production are also described.

The currently adopted ammonia production process basically employs the system invented by Fritz Haber and Carl Bosch about 100 years ago [1]. Therefore, this system is well known as Haber–Bosch process. About 85% of total production of ammonia worldwide is produced by this process [5]. The ammonia synthesis occurs according to reaction (1).

Ammonia synthesis is an exothermic reaction (negative enthalpy change), and it occurs spontaneously at low temperatures (negative entropy change). Although it is favored at room temperature, the reaction rate at which the reaction occurs at room temperature is too slow to be applicable for at an industrial scale. In order to increase the kinetics of the reaction to achieve the targeted conversion rate, high pressure and temperature are required. To effectively synthesize ammonia from its main components (hydrogen and nitrogen), the reaction should be performed at a relatively high temperature and pressure of 400–500 °C and 10–30 MPa, respectively, with the assistance of an iron-based catalyst. This condition is demanded due to the high dissociation energy (941 kJ/mol) of triple-bonded nitrogen. However, to bring the reaction under this high temperature and pressure, about 30 MJ/kg-NH3 of energy is required [6].

The production of ammonia from natural gas is conducted by reacting methane (natural gas) with steam and air, coupled with the subsequent removal of water and CO2. The products of this process are hydrogen and nitrogen, which are the feedstock for the main ammonia synthesis. During the process, the removal of sulfur and other impurities is important, because they can reduce and damage the performance of the catalyst during synthesis. In the ammonia synthesis process, both nitrogen and hydrogen are compressed to relatively high pressure to be fed to the synthesis reactor, where the catalyst is immersed inside. The produced ammonia, together with the unreacted hydrogen, argon and other impurities, is then cooled down for ammonia condensation in order to separate the ammonia from the other gases. The unreacted hydrogen and nitrogen are then recycled back and mixed together with the new feedstock. To avoid a build-up of impurities, such as argon, a small part of the gases is purged from the process. Ammonia synthesis produces a small amount of heat, which is released from the reactor; therefore, it can be recovered and utilized for other processes, such as steam and power generation. In general, about 88% of hydrogen’s calorific value can be conserved [7].

Another challenge in the Haber–Bosch process is its low conversion rate; therefore, the process must be recycled to achieve the expected production flow rate. However, at pressure of 30 MPa, the conversion rate from the reaction is still low, no more than 25% [8]. This stream recirculation causes some problems, including the need for an additional recirculation system and a larger reactor, leading to high investment and operation costs.

When hydrogen is produced via water electrolysis, nitrogen can be supplied via air separation. Air separations for nitrogen production can be conducted via membrane, cryogenic, absorption and adsorption technologies [9]. For large scales, cryogenic separation is considered more economical than other methods. In addition, cryogenic air separation could produce a high purity of products [10].

The energy consumed during ammonia production, including conversion from primary sources, typically ranges from about 28 to 37 GJ/t [5]. An ammonia production system from any primary source, such as natural gas, is considered complex, as it includes many combined processes. Figure 1 shows the schematic diagram of conventional ammonia production from natural gas. The system consists of different processes: steam reformation, the water–gas shift reaction, CO2 removal, syngas purification, and ammonia synthesis and separation. Therefore, efforts to reduce the total energy consumption require the improvement of the whole process involved. Due to high energy intensity of ammonia production, ammonia synthesis emits a total of 289.8 Mt-CO2 annually [11], which is almost 0.93% of global CO2 emissions [12].

Focusing on the Haber–Bosch process, many efforts to reduce its extreme conditions have been carried out. They include the introduction of an extra component in order to inhibit the catalysis and the alteration of geometry and electronic nature of the reacting components in order to optimize the energetics of catalysis [13]. Ru-based catalysts can basically facilitate ammonia synthesis under mild conditions (at a temperature of 300–450 °C and pressure of 4–15 MPa), which is significantly lower than the conditions required for iron-based catalysts. However, Ru-based catalysts are expensive and suffer from hydrogen poisoning [14][15]. Alkaline earth metal oxides and hydroxides have been identified as promoters to improve the catalytic performance of Ru-based catalysts [16]. Several electrides (crystals in which electrons serve as anions), such as Ca2N:e−, which can be deposited in Ru nanoparticles have the potential to facilitate ammonia synthesis at 200 °C [17]. Transition metals (TM) can also improve synthesis performance, including lowering the pressure and temperature. This is due to the existence of scaling relations between the transition-state energy required for the dissociation of nitrogen and the adsorption energy of all the intermediates [18][19]. Furthermore, Kawamura and Taniguchi [20] have tested sodium melt as a catalyst for ammonia synthesis. By using this type of catalyst, the synthesis could be carried out at reaction temperatures of 500–590 °C and atmospheric pressure. However, further analysis and experimentation are required to bring this method to the level of being applicable.

Although electrochemical processing is significantly under-developed compared to the Haber–Bosch process, it is expected to realize higher energy performance. The energy consumed by this process is about 20% lower than the Haber–Bosch process [21]. Figure 2 shows the schematic flow diagram of electrochemical ammonia synthesis. The process is considered simple; therefore, its application is considered to potentially reduce system configuration and control complexity. In addition, the investment cost can be lower compared to currently adopted ammonia synthesis systems. 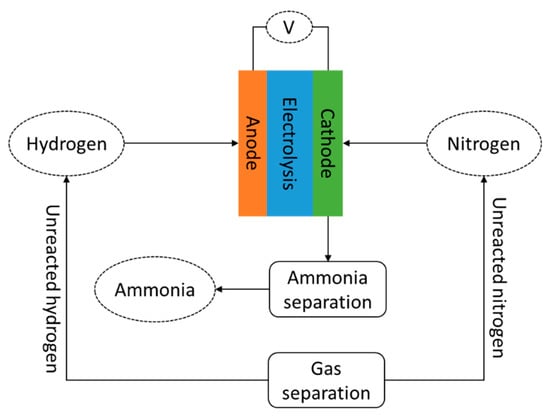 Four different types of electrolytes are currently available: (a) liquid electrolytes, (b) molten salt, (c) composite membranes and (d) solid state electrolytes. Liquid electrolytes can operate under atmospheric temperature and pressure [22]. There are some potential liquid electrolytes, including LiClO4 (0.2 M) in tetrahydrofuran [22], LiClO4 in ionic liquid, LiClO4 in H2SO4 and Li2SO4 in H2SO4 [23]. Ammonia production of 3.68 × 10−10 mol/cm2·s could be obtained, while the system efficiency can reach about 58%, indicating that about 58% of the current supplied to the system is converted into ammonia. However, the research related to this issue is still limited to lab experiments, in small dimensions of cells and limited operation times [2].

A molten salt type electrolyte is generally operated at a temperature range of 300–500 °C [24]. There are some potential chemicals for use as electrolytes, such as LiCl, KCl and CsCl, with dissolved Li3N [25]. The reported ammonia production rate is 3.3 × 10−9 mol/cm2·s, and the efficiency is about 72%. Moreover, the system with composite electrolytes also includes solid electrolytes, which are combined with low melting salt, and have an operating temperature of 300–700 °C. The electrolytes comprise the main ionic conducting phase and an additional phase that is attached to the main phase to improve the electrical, mechanical and thermal properties [26]. As the representative of composite electrolytes, alkali metal carbonate (such as LiCO3) and oxide (such as LiAlO2) and CeO2 doped with Sm2O3 have shown the expected properties, including oxygen ion, carbonate ion and proton conductivity [27]. In addition, Amar et al. [27] have tested mixed Na, K and Li carbonates, in addition to the LiAlO2, as the electrolyte. They obtained an ammonia production rate of 2.32 × 10−10 mol/cm2·s at a temperature of about 400 °C. The system with solid electrolytes generally operates in very wide operating temperatures, from room temperature to about 800 °C. There are different materials which can be included in this type of electrolyte. These include perovskites (such as cerate and zirconate) [28], fluorites (such as doped zirconia, ceria and thoria), pyrochlores (such as calcium doped lanthanum zirconate) and other materials (including brownmillerite, eulytite and monazite) [26]. The challenges of this type of electrolyte include their structural stability and the high sintering temperature (up to 1700 °C) which is required to achieve a high density. By adopting this kind of solid state electrolyte, the ammonia production rate of 3.1 × 10−9 mol/cm2·s could be achieved under the temperature of 570 °C, with an efficiency of about 75% [27][29].

As an alternative process for ammonia production, a process employing the thermochemical cycle has been developed [30]. The system consists of two circulated processes: reduction (nitrogen activation) and steam-hydrolysis (ammonia formation). Both reactions are summarized as follows:

Figure 4. Schematic diagram of the thermochemical cycle of ammonia production.

Unlike the Haber–Bosch process, this thermochemical cycle can be carried out at atmospheric pressure and without a catalyst. The process allows independent reaction control for nitrogen activation (reaction (4)) and ammonia formation (reaction (5)). Furthermore, as could be observed from reaction (4), the system can produce ammonia directly from carbonized material, instead of pure hydrogen. Therefore, this system is expected to be able to reduce the energy consumption during ammonia production. However, this system has the biggest challenge related to its very high operating temperature, leading to limited heat sources and materials. Various ideas have been suggested for the heat supply, including the utilization of concentrated solar heat.

Juangsa and Aziz [32] have developed an integrated system, consisting of nitrogen production, ammonia production employing the thermochemical cycle and power generation. In their system, the heat required for reduction is basically covered by heat generated by the combustion of fuel gases produced during ammonia production. The system can achieve a high total theoretical energy efficiency of about 69%. In addition, they also stated that the oxidation temperature has a significant role in the performance of the system.

Due to increasing concern related to economic and environmental impacts, efforts to propose and develop an advanced ammonia production system have been carried out intensively. These include both thermochemical and electrochemical processes.

Cinti et al. [33] have proposed a combined system which consists of solid oxide electrolyser, nitrogen production with pressure-swing adsorption and Haber–Bosch process. Moreover, the same group [11] also developed an integrated system covering methane steam reforming and Haber–Bosch process. They mainly focused on system integration and heat recovery to improve the total energy efficiency. Furthermore, Aziz et al. [34] have proposed an integrated system for hydrogen conversion to ammonia with a relatively high total energy efficiency. Their system includes cryogenic nitrogen separation with a single distillation reactor, the Haber–Bosch process and power generation. The produced heat during ammonia synthesis, as well as the purged gas (containing a little hydrogen and ammonia), is recovered and utilized for power generation. In addition, they employed both exergy recovery and process integration in order to realize high energy efficiency [35].

Other integrated systems for the production of ammonia from various kinds of primary energy sources have been developed. Nurdiawati et al. [36] have proposed algae-based ammonia production by integrating algae drying, gasification, chemical looping, ammonia synthesis (the Haber–Bosch process) and power generation. In their system, the nitrogen separation process is omitted due to the utilization of nitrogen-rich flue gas from the chemical looping. Their system is able to efficiently convert the algae to ammonia, with a total energy efficiency of about 64%, including an ammonia production efficiency of 63%. A different system has also been developed by the same group [37], with the main difference in hydrothermal gasification and nitrogen production. Another combined system to convert the agricultural waste from a palm oil mill has also been proposed and evaluated by Ajiwibowo et al. [38]. In their system, the supercritical water gasification of blended empty fruit bunch and palm oil mill effluent is combined with syngas chemical looping and Haber–Bosch-based ammonia synthesis.