Impatiens longiaristata (Balsaminaceae), a new species from western Sichuan Province in China, is described and illustrated here based on morphological and molecular data. It is similar to I. longiloba and I. siculifer, but differs in its lower sepal with a long arista at the apex of the mouth, spur curved downward or circinate, and lower petal that is oblong-elliptic and two times longer than the upper petal. Molecular analysis confirmed its placement in sect. Racemosae.

Impatiens L. (Balsaminaceae) is one of the most species-rich genera of angiosperms with more than 1000 species [1][2]. It is mainly distributed in tropical and subtropical Africa, Madagascar, southern India and Sri Lanka, eastern Himalayas and Southeast Asia [3][4]. In contrast to the wide distribution of the genus, many Impatiens species are endemic to specific mountains or valleys. Most of the species are forest plants, usually growing in moist semi-shaded places, rarely in semi-arid places [2][5]. Flowers of Impatiens are zygomorphic and have a wide variety of morphology and colors [4][5]. The diversity of species has resulted in an extremely complex interspecific relationship in this genus. Since Hooker and Thomson [6] provided the first infrageneric classification for Impatiens based only on morphological data, several infrageneric classifications of the genus have been proposed in the last century [7][8][9]. However, all of these classifications were based on a few macromorphological characters only. Fortunately, phylogenetic studies using nucleotide sequences have made great contributions to our understanding of the evolutionary relationships of Impatiens in the last two decades [4][5][10][11][12][13]. Of these studies, the most notable is that in which Yu et al. [5] proposed a new classification based on phylogenetic and morphological evidence in 2016. They divided this genus into two subgenera: I. subgen. Impatiens and I. subgen. Clavicarpa S. X. Yu ex S. X. Yu & Wei Wang. I. subgen. Impatiens was further divided into seven sections, of which I. sect. Racemosae Hook. f. et Thomson was characterized by its inflorescences racemose, many-flowered; lateral sepals 2, rarely 4 with inner 2 reduced; capsule linear; and seed ovoid.
China is a hotspot for the distribution of Impatiens and has numerous balsam species, most of which are distributed in the southwest of the country. The Flora of China lists 227 species, of which 187 are endemic [14]. According to Du et al. [15], a total of 69 new taxa of Impatiens have been described in China between 2000 and 2019, and 13 new taxa [16][17][18][19][20][21][22][23][24][25][26][27][28] and three new records [28][29][30] have been published in the last two years, bringing the total species reported for China to nearly 290. 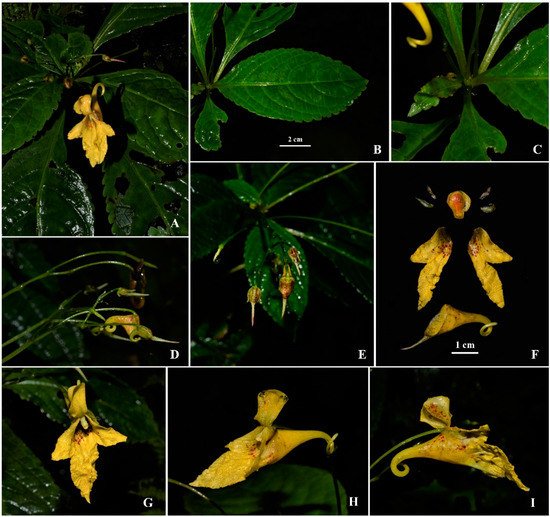