To achieve resistance-free breeding, a growing number of studies has been conducted to evaluate non-antibiotic alternatives and their effects on the health and production performance of animals [1]. Fermented feed has attracted wide attention in livestock and poultry breeding because of their potential to improve the nutritional quality of feedstuffs by increasing nutrient bioavailability and reducing feed costs [2][3]. Previous research has demonstrated that fermentation may enhance the bioavailability of feed nutrients by the following processes: (1) increasing crude protein content [4], (2) decreasing fiber content, (3) enhancing the utilization of vitamins, (4) improving amino acid patterns and protein solubility [5] and (5) degrading anti-nutritional factors with enzymes, such as phytase, xylanase, cellulase, and glucanase enzymes [6]. Besides this, the probiotics and metabolites produced during the fermentation process could reduce the colonization of gut pathogenic microorganisms via competitive exclusion and the secretion of antibacterial substances (like bacteriocin), and thus exert beneficial effects on animals [7].
Gut integrity and function are essential factors in maintaining animal health and production performance. Intestinal morphology is an important criterion for evaluating intestinal health of animals. Villus height and crypt depth were related to nutrient digestion and poultry performance [8]. The composition and diversity of intestinal microorganisms also have a profound impact on the gut health of poultry. Colonization of harmful bacteria will disrupt the intestinal microbial balance, and then affect the host’s physiology, immunity, and nutritional metabolism [9]. Probiotic fermentation has been regarded as an effective method to enhance gut health [10] and it has been widely used in pig rations for several years [11]. Recently, there have been more studies on the utilization of fermented products in poultry industry, particularly focusing on gut health and production parameters of birds. It was reported that the use of fermented feed had a positive impact on the production performance and egg quality of 16 wk Babcock pullets [12]. Semjon et al. [13] observed that fermented wheat bran supplementation could improve broiler performance and meat quality. Fermented feed has been demonstrated to be beneficial to the maintenance of gut microbial ecosystems and intestinal morphology, possibly due to low pH, elevated numbers of probiotics, high short-chain fatty acid concentrations and reduced pathogens [14][15]. In addition, fermented feed could modulate gut microbiota by providing energy and nutrients to probiotics in the microbial community [16]. Therefore, fermented feed was speculated to exert beneficial effects on gut health by altering intestinal microbial composition and subsequently contributed to improvements in laying hen performance. However, the effects of fermented feed on intestinal community and gut health of laying hens remain unclear.
In China, fermented feed mainly refers to the fermented single feed material, such as soybean meal [17], rapeseed meal [15] and cottonseed meal [18]. However, there were few studies evaluating the effectiveness of corn–soybean meal mixed feed in laying hens. 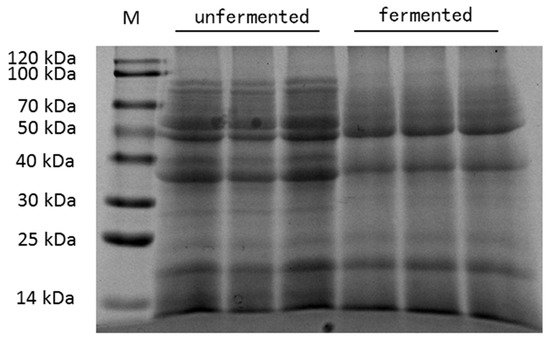 Secretory IgA (sIgA) acts as the first immune defense for intestinal epithelium and maintains the homeostasis of the gut. Therefore, we assessed the intestinal immune function by measuring the intestinal sIgA contents. As shown in Figure 2a, no statistical differences in sIgA content were observed in the duodenum and ileum. However, the jejunal sIgA content was significantly higher in the 6% and 8% fermented mixed feed group compared to the other treatments. In the presence of intact epithelial cell layers, intercellular paracellular pathways must be closed. This function is effectuated through physical barriers—especially by tight junctions [19]. In addition, mucin 2 (MUC2) is the most abundant mucin, which creates the first defense line against invading microorganisms [20]. Thus, we focused on the mRNA expression levels of zonula occludens 1 (ZO-1), occludin (OCLN) and MUC2 in jejunal mucosa to further explore the physical barriers of laying hens. Figure 2b showed that fermented mixed feed at three levels all significantly increased MUC2 gene expression compared with the control group, whereas 4% fermented mixed feed significantly decreased the mRNA expression of ZO-1.

Figure 2. Effects of fermented mixture supplementation on the intestinal sIgA content (a) and the physical barrier in the jejunum (b) of laying hens. Data are expressed as mean ± SEM of 6 replicates per treatment; a–c There are statistically significant differences in the mean values per line for different superscripts (p < 0.05).

As the microbial community plays an important role in the intestinal health and barrier function of laying hens, the composition of the cecal microbial community was analyzed using the 16S rRNA gene amplicon sequence. After filtering, an average of 60,788 ± 6481 reads were obtained for each sample. In the 16S amplicon data analysis, the Shannon and Simpson indices were used to assess the community diversity, and the ACE and Chao1 indices reflected the community richness. Therefore, alpha diversity was measured using these four indices, and there were no significant differences in cecal feces microbiome taxon abundance and diversity (p > 0.05; Table 3) among the groups, indicating that fermented mixed feed did not change the alpha diversity of the microbiota of the chicken cecum. Beta diversity was illustrated via principal component analysis (PCA) in Figure 3, showing fermented mixed feed treatment significantly affected cecal microbiota composition. The composition of the microbiota was similar between the 6% and 8% fermented mixed feed group. ANOSIM results, shown in Table 4, indicated that the variations of the inter-group microbiota composition of the 6% and 8% group were considered significant (p < 0.05) to the control group and were larger than those of the inner-group (R > 0.05). Hence, to illuminate how fermented mixed feed served to improve the gut health of laying hens, the 6% group was selected as the representative group among the 3 treated groups to identify the roles of fermented mixed feed in regulating the cecal microbiota. 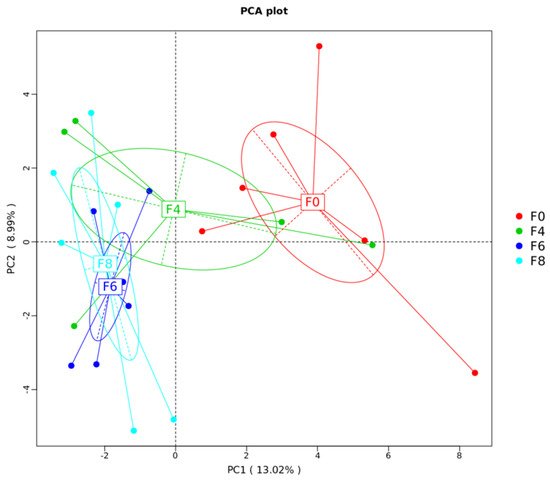 Figure 3. Comparison of the compositions of the cecal microbiota by principal component analysis (PCA). F0, basal diet; F4, 4% fermented mixed feed; F6, 6% fermented mixed feed; F8, 8% fermented mixed feed.
Table 3. Effect of fermented mixed feed on α-diversity of cecal microflora in layers.
Table 4. Comparison of similarities in microbiota composition between the three treatments by ANOSIM analysis.
Since pairwise comparisons (0 and 6%) and the data were in accordance with normal distribution, t-test analysis was used to evaluate the differential bacteria (relative abundance > 0.1%) on the phylum and genus (Figure 4). Compared with the basal diet, at the phylum level, supplementation with 6% fermented mixed feed significantly improved the Tenericutes abundance but reduced the abundance of Actinobacteria; at the genus levels, the abundance of Parasutterella, Butyricicoccus, unidentified_Erysipelotrichaceae and Mailhella were found to be significantly increased and Alloprevotella, Gallibacterium, Romboutsia (p < 0.05) and Enterococcus were significantly decreased in the 6% fermentation group when compared with the 0% control group (p < 0.05). 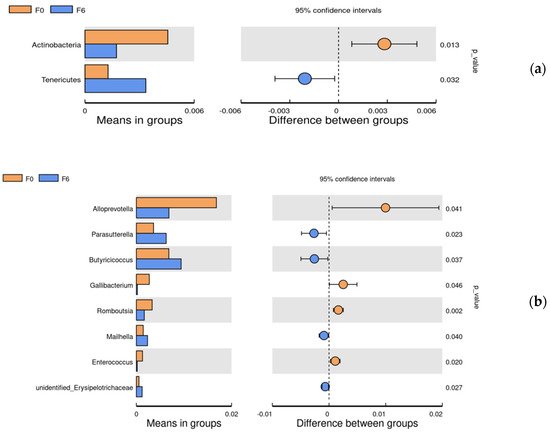 Figure 4. The phylum (a) and genera (b) differentially abundant between F0 and F6 in the cecal by t-test analysis. F0, basal diet; F6, 6% fermented mixed feed.

6. Correlations between Microbiota and Gut Health

In order to explore the specific bacteria related to gut health, the Spearman correlation coefficient (Figure 5) was used to analyze the correlation between the abundance of the cecal microbiota and the intestinal barrier. This analysis can identify species that are significantly correlated with certain environmental factors. The heatmap revealed significant positive correlations between intestinal morphology (higher villi height VH, shorter crypt depth CD and lager villi height:crypt depth VH/CD indicate superior development) and unidentified_Lachnospiraceae, unidentified_Spirochaetaceae, Barnesiella Helicobacter, Parasutterella and Synergistes. In contrast, the intestinal morphology was negatively correlated with Bacteroides, Megamonas, Desulfovibrio, Alistipes, Tyzzerella, Fournierella Succinatimonas, Gallibacterium and Elusimicrobium significantly. In addition, the abundance of genus Faecalibacterium and Desulfovibrio were negatively correlated with the jejunal sIgA contents, and the abundance of genus Sutterella and Lachnoclostridium were negatively correlated with the duodenal sIgA content. Moreover, Fournierella was positively correlated with ileal sIgA contents. 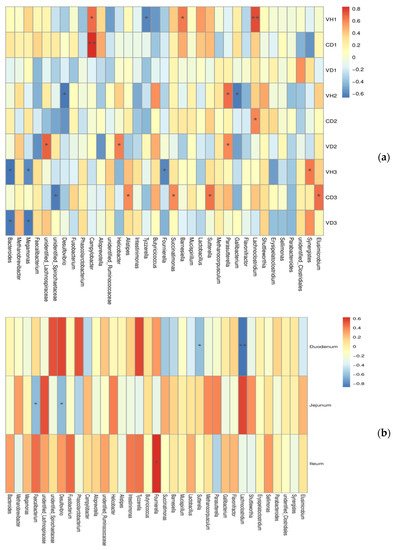