Enhanced cognitive behaviour therapy, also known as CBT-E, is a “transdiagnostic” psychological treatment for all forms of eating disorder including anorexia nervosa, bulimia nervosa, binge eating disorder and other similar states. CBT-E was devised by Christopher Fairburn and colleagues in Oxford [1][2], but then it was adapted by Dalle Grave and colleagues also for younger people [3] and for day patients and inpatients [4].

2. The Transdiagnostic View of Eating Disorders

Figure 1. The transdiagnostic view on the processes that maintain eating disorder psychopathology

3. Phases of the Treatment

When working with people who are not significantly underweight, CBT-E generally involves an initial assessment appointment followed by 20 treatment sessions over 20 weeks, lasting 50-minutes each.

CBT-E isn’t a “one-size-fits-all” treatment.  CBT-E is a highly individualised treatment. The therapist creates a specific version of CBT-E to match the exact eating problem of the person receiving treatment. CBT-E has four stages (Figure 2). 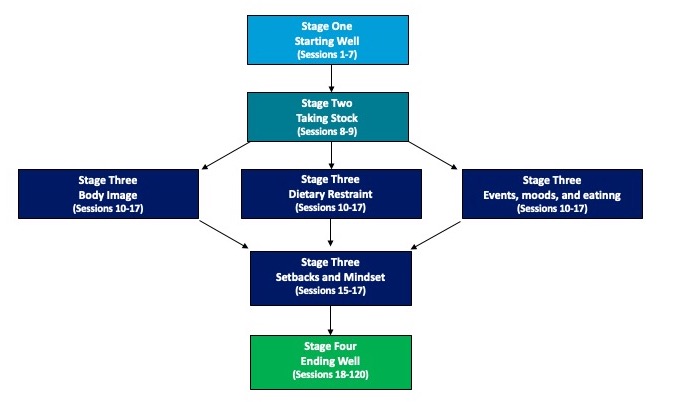 Stage One, the focus is on gaining a mutual understanding of the person’s eating problem and helping him or her to modify and stabilise their pattern of eating. There is also emphasis on personalised education and the addressing of concerns about weight. It is best if these initial sessions are twice a week.

In the brief second stage, progress is systematically reviewed and plans are made for the main body of treatment (Stage Three).

Stage Three consists of a run of weekly sessions focused on the processes that are maintaining the person’s eating problem. Usually, this involves addressing concerns about shape and eating; enhancing the ability to deal with day-to-day events and moods; and addressing of extreme dietary restraint.

Towards the end of Stage Three and in Stage Four the emphasis shifts onto the future. There is a focus on dealing with setbacks and maintaining the changes that have been obtained.

Generally, a review session is held some months after treatment has ended. It provides an opportunity for a review of progress and the addressing of any problems that remain or have emerged.

With people who are underweight, treatment needs to be longer, often involving around 40 sessions over 40 weeks. In this version of CBT-E, weight regain is integrated with addressing eating disorder psychopathology in three steps (Figure 3). Before embarking on weight regain, patients and therapists spend the first weeks of this treatment carefully considering the reasons for and against this change. The goal in CBT-E is that patients themselves decide to regain weight rather than having this decision imposed upon them. During the final step of weight regain the patient becomes accomplished at maintaining their weight. 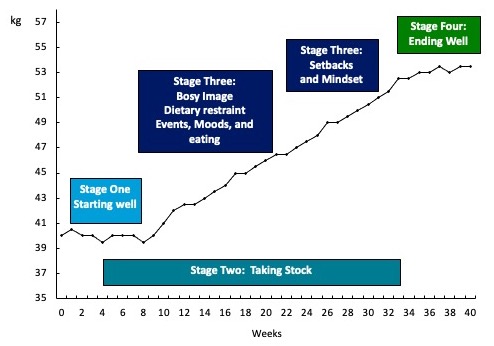 CBT-E can be delivered in two forms: (i) a “focused” form, which exclusively addresses the eating disorder psychopathology; or (ii) a “broad” form, which also addresses one or more of the following “external” maintaining mechanisms: clinical perfectionism, core low self-esteem, marked interpersonal difficulties.

The focused form is indicated for most patients and should be viewed as the default version. With most patients, it is more effective than the broad version and it is easier to implement. The broad form should be reserved for patients who (i) have a pronounced form of one of the “external” maintaining mechanisms to core eating disorder psychopathology and (ii) where this mechanism appears to be contributing to the maintenance of the eating disorder. The decision to use the broad form is taken during a review session in Stage Two, as by then the therapist knows the patient reasonably well and barriers to change will be becoming clear.

5. The Current Status of CBT-E

If one focuses on studies in which CBT-E was delivered well, the evidence suggests that with patients who are not significantly underweight about two-thirds of those who start treatment make a full recovery. This recovery appears to be well-maintained. Many of the remainders have also improved but not to this extent. The response rate is somewhat lower in patients who are substantially underweight and fewer complete treatment.

As matters stand, the research findings may be summarised as follows:

CBT-E is the only treatment recommended by the National Institute for Health and Care Excellence (NICE) for all the forms of eating disorders both for adults and adolescents.