Cell transdifferentiation and reprogramming refers to a group of approaches that allow researchers to halt/reverse the development of adult cells, or convert them one from one cell type to another. The manipulation of cell fate can be achieved by enrolling exogenous/artificial controls. The chemical/small molecule and regulatory components of transcription machinery serve as potential tools to execute cell transdifferentiation and have thereby uncovered new avenues for disease modeling and drug discovery. At the advanced stage, one can believe these methods can pave the way to develop efficient and sensitive gene therapy and regenerative medicine approaches. 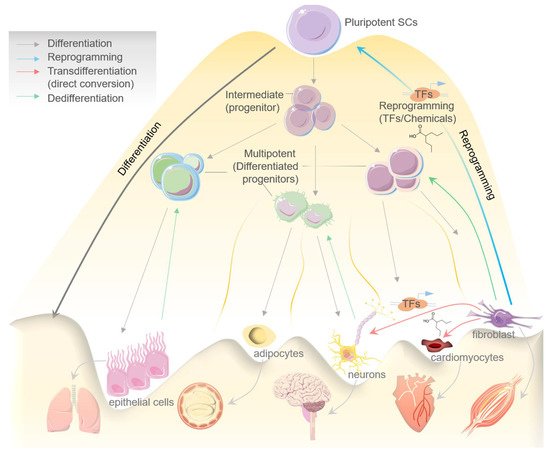 Figure 1. Schematic diagram showing processes of differentiation, reprogramming, transdifferentiation (direct conversion), and dedifferentiation in determining the cells fate, while dedifferentiation represents a reverse step in this process. Model exhibiting the pluripotent stem cells (SCs) differentiation to intermediate progenitor SCs, then to multipotent SCs/differentiated progenitors, and eventually to mature tissue-specific specialized cells. Reprogramming indicates reverting back a mature cell into induced pluripotent stem cells (may consist of an intermediate step/cell population) with the help of specific transcription factors (TFs) and chemicals/small molecules. Transdifferentiation represents the direct conversion of a specialized mature cell into another cell type by the help of specific TFs and chemicals/small molecules.

Cell reprogramming can be induced artificially by chemicals/small molecules or by expressing certain transcription factors (TFs), which reprogram a cell to enter an intermediate or pluripotent state [6] (Figure 1). Davies and Weintraub, in the earliest report in 1987, firstly demonstrated the ability of lineage-specific TFs to govern cell fate [7]. Murry et al., later in 1996, brilliantly showed that MyoD expression across different cell lines in vitro stimulates muscle-specific genes’ expression and may further convert these cells into myoblasts [8]. Accumulating evidence in the last three decades has significantly established cellular reprogramming and transdifferentiation in mammals; however, events altering cell fate were also seen to occur naturally [9].

The pathological side of these processes is known in clinical practice, for instance in Barret’s metaplasia, Cdx2 activation transdifferentiates stratified squamous cells into epithelial cells, which potentiates esophagus carcinoma [10]. Earlier reports showed that the transdifferentiation of diverse cell types into myofibroblasts may cause fibrosis in the case of injury or chronic damage to the liver [11], kidney [12], and muscle [13], while a natural transdifferentiation mechanism can be seen in heart [14], liver [15], and in the lens regeneration process in axolotls [16]. Although such remarkable regeneration abilities produced by endogenous transdifferentiation are largely restricted to lower vertebrates, mammals exhibit limited features [9]. For instance, after injury, Lgr5+ led transdifferentiation induces the revival of the hair follicular cells in the inner ear, a rare feature that is exclusive to the neonatal stages. However, in the adults it fails to repair injury significantly [17].

Developments in this field have largely been fueled by investigations into these model organisms and their regenerative abilities, and from the accumulating knowledge on small molecules/chemicals and key cell fate-regulators. The latter includes key transcription factors that can instigate cellular reprogramming and transdifferentiation [18][19][20][21][22], which is largely seen as a promising therapeutic strategy in disease modeling [5][23][24][25][26]. In the following section, we review the role of diverse factors involved in cellular transdifferentiation towards regulating the cell fate in disease modeling.

A recent development in transdifferentiation or direct lineage-reprogramming— where a cell converts into another cell type without crossing the pluripotent state—offered novel applications to produce functional cells/tissues in disease modeling [18]. Although several functional cell types, including cardiomyocytes, neurons, progenitor/stem cells, hepatic stem cells, hepatocytes, and blood/hematopoietic stem cells have been obtained from fibroblasts/other somatic cells in vitro using the TFs or chemical-mediated transdifferentiation approach, a greater focus of translational research on neural and cardiac cells has been evident.

Recently, Qin et al. demonstrated the transdifferentiation of human fibroblast cells into DA-neuron-like cells by using a combination of protein factors and small molecules [27]. Their method exhibited efficient direct conversion, as 95% of yielded cells were TUJ1-positive, and the process did not include an intermediate neural stem/progenitor stage. In another recent report, Song et al., by using a doxycycline-inducible TFs system (carrying Ngn2, Ascl1, and Dlx2) in human pluripotent stem cells, performed the successful transdifferentiation of these cells into excitatory and inhibitory neurons, exhibiting an equivalent phenotype and molecular signature [28].

Although these studies still do not qualify directly for therapeutic applications or diseases modeling, they do demonstrate proof-of-principal that neurons with post-mitotic state can be transdifferentiated from different cell types, or cell-to-cell conversion can be programmed. These reports decisively affirmed that TFs-mediated neural stem/progenitor cells’ transdifferentiation can critically shape its therapeutic applications, and utility in disease modeling, more specifically in neurodegenerative and age-related neuronal diseases.

Obtaining human cells and stem cells is a practical impediment. Given the non-invasive source of multiple types of cells, urine can be obtained from patients of any age. Urine cell-derived competent cells have emerged as a major tool for research given its therapeutic importance [29]. Xu et al. demonstrated direct transdifferentiation of human urine cells to neurons using a seven small molecule cocktail (CHIR99021, A8301, Y-27632, TTNPB, Forskolin, VPA, NaB) [30]. The transdifferentiated neurons exhibited a mature neuron-like phenotype and molecular signature as validated by the expression of neuronal markers. Further, Qin et al. used a combination of small molecules and protein factors and successfully performed transdifferentiation of human fibroblasts into neuron-like cells without passing through a neural stem/progenitor intermediate stage [27]. Although these reports showed efficient neuronal transdifferentiation from various cell types, the underlying molecular mechanism of these processes warrants further investigation.

Cellular reprogramming refers to a group of approaches that allow researchers to halt or reverse the development of adult cells. The validation of cellular reprogramming in human cells has paved the way for a slew of new stem cell biology, disease modeling, drug development, and regenerative medicine applications [19]. The presence of pluripotent stem cells in a population that gives rise to all cells is one of the most defining elements of early mammalian development [31]. Due to a shortage of primary cells from the human central nervous system (CNS) and peripheral nervous system, human-induced pluripotent stem cells (hiPSCs) can also be studied for neurogenerative disease [32]. However, researchers have been able to conduct studies on the recapitulation of physiological and pathological pathways in patient-derived lines. This has resulted in more realistic disease modeling platforms [33]. These are widely utilized in drug discovery and safety investigations, for instance in the development of AD drugs with the goal of identifying chemicals that can inhibit or lower amyloid-beta levels [34]. Some of the recent studies where chemical/small molecules  or transcription factors have been employed for inducing cellular reprogramming to study neuronal and cardiac systems have been listed in Table 1 and Table 2, respectively.

Importantly, iPSCs and ESCs have a high degree of similarity, providing new promise for the use of pluripotent stem cells for regenerative therapies with fewer ethical problems and potentially improved patient specificity [62]. The development of innovative stem cell-based models to investigate the underlying processes of lineage differentiation and embryonic morphogenesis has been aided by the availability of embryo-derived stem cells that capture the lineage propensity [63].

Reprogramming the adult somatic cells into induced pluripotent stem cells (iPSCs) is another effective model that has a bright future as regenerative medicine. Therefore, disease models are critical for revealing the molecular basis of a variety of diseases, enabling the development of new treatments.

Pluripotent stem cells (PSCs), which include embryonic stem cells (ESCs) and induced pluripotent stem cells (iPSCs), have a limitless ability to self-renew and proliferate. This feature allows them to generate a therapeutically relevant number of cells for regenerative therapy [24]. This would help the researchers to better understand the mechanisms driving a variety of human genetic, malignant, and non-malignant disorders. Genome editing techniques have also been utilized to fix disease-specific iPSC mutations, resulting in gene-corrected iPSCs that can be employed for autologous cell-based treatment [64]. The number and kind of cells, their efficiency, footprint, and long-term translational goal influences all its reprogramming approaches. However, fibroblasts and peripheral blood mononuclear cells remain the gold standard, despite the usage of diverse cell types. When compared to iPSCs produced from other parental tissues, blood cells were less likely to develop aberrant DNA methylation, and these cells exhibited stronger hematopoietic differentiation ability [65][66]. Therefore, the generation of patient-specific iPSCs provides a safer alternative for clinical applications. 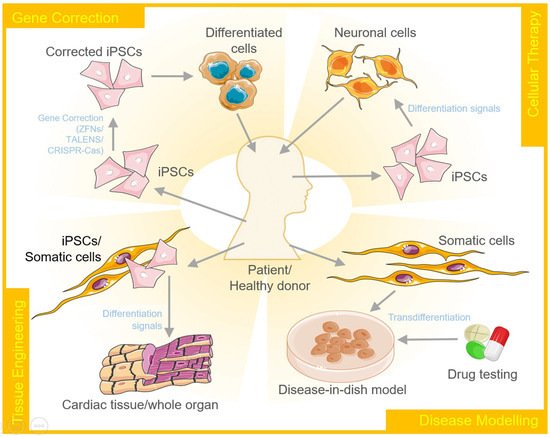 A disease model represents the abnormal state of cells that occur in a specific disease. Therefore, it allows researchers to investigate and understand the intricate mechanisms that lead to the onset and further progression of the disease. These models can further be explored for developing and testing therapeutics. Cellular reprogramming of stem cells to create disease-in-a-dish models has gained a lot of attention over the past few years. These disease models are capable of self-renewal and also differentiate into desired cellular types to capture the disease pathogenesis [67]. Using iPSCs, one of the earliest disease models developed was to study spinal muscular atrophy. The motor neurons produced by diseased iPSCs carried the histological markers of the disease and degenerated at a rate faster than the wildtype control neurons [68]. On similar lines, disease models for many other neurological and cardiac disorders have been developed to date that include Down syndrome, Parkinson's disease, Alzheimer's disease, long QT syndrome, catecholaminergic polymorphic ventricular tachycardia, arrhythmogenic right ventricular cardiomyopathy/dysplasia, dilated cardiomyopathy, left ventricular non-compaction, hypertrophic cardiomyopathy, Barth syndrome, fatty acid oxidation disorders and Pompe diseases to name a few.

The concept of regenerative medicine involves the switching of stem cells or dedifferentiating somatic cells into stem cell-like multipotent cells. These cells can proliferate and then re-differentiate into the desired lineage to repopulate the damaged or degenerated tissue with functional cells. The reprogramming of the cells can be conducted in vitro, in vivo, or ex vivo to regain their regenerative properties. The use of a single transcription factor, such as FOXN1, has been shown to regenerate the thymus in aged mice. Though a lot of efforts are being made to explore and understand mammalian stem cell biology, the knowledge regarding the regenerative capacity of the mammalian system is still limited. However, it is known that the cellular environment, including the modulators present in the extracellular matrix, cytokines, and growth factors, plays a crucial role in this process [69].

An alternative to the natural regenerative potential of mammalian stem cells is to induce transdifferentiation in somatic cells. Differentiated cells, such as neurons derived from iPSCs, have been observed to represent an embryo-like stage. The epigenetic changes that a cell undergoes as it ages or becomes diseased are therefore not reflected by the matured cells. This results in the importance of the transdifferentiation process, whereby the phenotype of one somatic cell type can be converted into another without an intermediate progenitor stage [37]. For instance, Ieda and his colleagues used a combination of Gata4, Mef2c, and Tbx5 developmental transcription factors to transdifferentiate postnatal cardiac or dermal fibroblasts into cardiomyocyte-like cells. The gene expression profile and function of the differentiated cells was also found to be similar to the adult cardiomyocytes [70]. Similar studies enhancing the in vivo efficiency of cardiac cell reprogramming [71] and the use of small molecules for the same have also been reported [40].

Gene editing, in combination with stem cell technology, has the potential to revolutionize the field of medicine, especially for the corrective therapy of monogenic diseases such as sickle cell anemia. In the most simplistic representation, it works by generating patient-specific iPSCs, correcting the genetic defect, ex vivo/in vivo differentiation of the modified cells, followed by the transplantation of the corrected cells/tissue into the patient. The discovery of gene-editing tools, such as zinc finger nucleases, TALENS, and CRISPR/Cas9 has relatively simplified the process of gene editing, making the dream come true. One of the encouraging examples is the replacement of CAG expansion by normal repeats in the huntingtin gene in iPSCs derived from fibroblast cells of Huntington patient. The correction was sustained by the differentiation DARPP-32-positive neurons as well under both in vitro and in vivo conditions [72].