Dendrimer a beautiful greek word in magic of chemistry

Chemistry is the magic science that gives a good reason in people to follow it. For me as a greek chemist it's very interesting that in science a lot of words came from my native language. One of this words is the word dendrimer that came from synthesis of two grre words. In this article I want to speak about this and to express, that the interesting, is that the dendrimer didn't found it in Greece, but take a greek name.

As a chemist i have done after my bachelor, a master and a phd. In my thesis and of course in the laboratory i have used the most known dendrimer in the world of biochemistry that it is the PAMAM. In my language the word δέντρο means tree and the word μέρος means part, so why the man that discovered this, didn't give the a meaning like part of the tree, in this question of course i don't have the answer but i have the answer around the dendrimer or δενδριμερές (In greek language when the word δέντρο putted in the synthetised word τ(taf) came as δ (delta). But the question that occurs is why partt of the tree? The answer is in the picture of the dendrimer (scheme 1) that seems like to see a tree from the top.

One dendrimer usually has symmetrically repetitively branched molecules around the core [1][2]. The first dendrimers were made by divergent synthesis approaches by Fritz Vögtle in 1978[2] and further research happened by a lot of other researchers. From the first day of research the popularity of those special polymers increased and today a lot of papers content those polymera that can be found also as  arborols and cascade molecules

Dendritic molecules are characterized by structural perfection. Dendrimers and dendrons are monodisperse and usually highly symmetric, spherical compounds. The field of dendritic molecules can be roughly divided into low-molecular weight and high-molecular weight species. The first category includes dendrimers and dendrons, and the latter includes dendronized polymers, hyperbranched polymers, and the polymer brush.

Dendrimers can be classified  to the number of repeated branching cycles that are performed during its synthesis. For example, if a dendrimer is made by convergent synthesis (see below), and the branching reactions are performed onto the core molecule three times, the resulting dendrimer is considered a third generation dendrimer. Each successive generation results in a dendrimer roughly twice the molecular weight of the previous generation. Higher generation dendrimers also have more exposed functional groups on the surface, which can later be used to customize the dendrimer for a given application.

Τwo are the main synthesis strategies; one is the divergent method and the other is the converging one. In the high generation the synthesis with diverging method is avoid, because the attribution is small. So The converging method was developed from Frechet and Hawk [9]and forms the molecule from the outside to the inside like it shown in scheme 2. 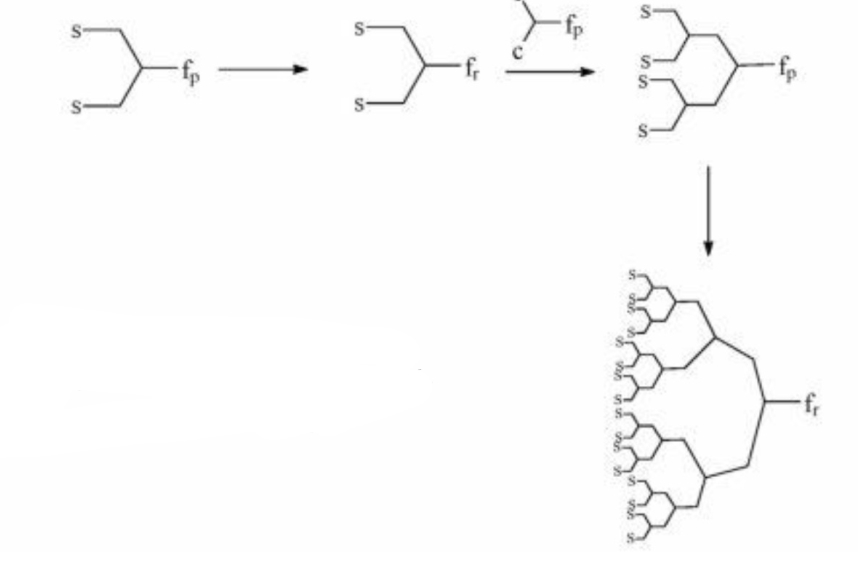 In the final step of the process we obtain a dihydric mononuclear compound that can be used to form the final dendrimer. The method of protection and deprotection is followed for the synthesis of the dendrimer, followed by the connection of the trees in the final stage. This method has the advantage that any by-products are different from the dendrimer and are easier to remove.

The diverging method was developed by Denkelwalter, Tomalia, and Newkome [10]. This method is based on the existence of a multi-core core in which branches are gradually introduced as shown in the scheme 3.

The PAMAM, as it mentioned before ,was prepared with the last method. The process of formation in this method is fully controlled using an active nucleus and at initiation using typically the ammonia which reacts with α, β-carbonyl compounds according to the Michael type addition[11]. More generally, it should be pointed out that during the process of preparing a dendrimer there are products and by-products in incomplete form. These imperfections are divided into two categories: a) the outer ones, where there is a double bond between two molecules; and b) the inner ones, where there is a bond formed intermolecularly, as illustrated in the scheme 4. 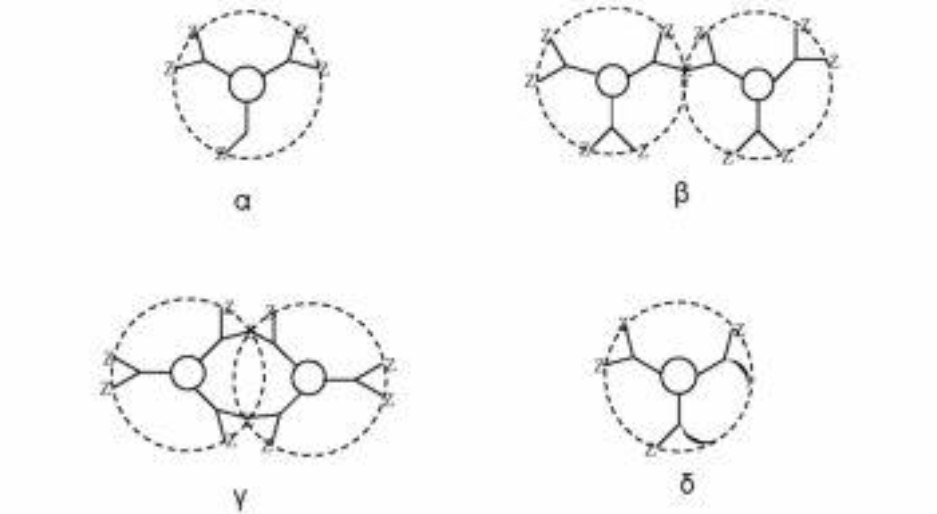 What means generation in dendrimer?
Each time we create a dendrimer we create several generations. The first synthesis is usually called G1 generation, the second generation G2 synthesis, etc. Starting from a simple ethylenediamine, we can come up with the various generations of PAMAM dendrimer, as shown in the scheme 5 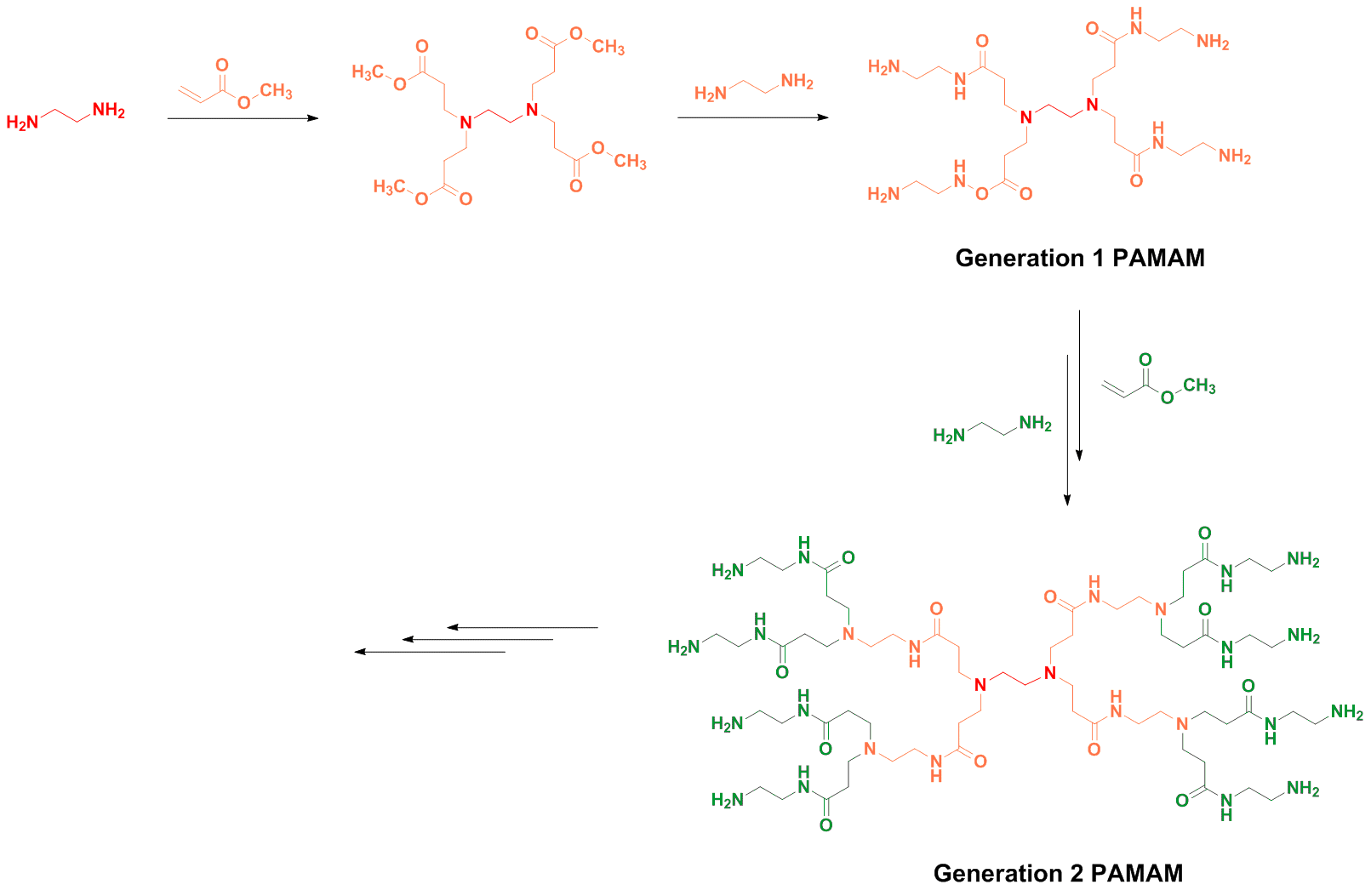 PAMAM
Poly(amidoamine), or PAMAM(Scheme 6), is a class of dendrimer which is made of repetitively branched subunits of amide and amine functionality. PAMAM dendrimers, sometimes referred to by the trade name Starburst, have been extensively studied since their synthesis in 1985,[1] and represent the most well-characterized dendrimer family as well as the first to be commercialized[12]. Like other dendrimers, PAMAMs have a sphere-like shape overall, and are typified by an internal molecular architecture consisting of tree-like branching, with each outward 'layer', or generation, containing exponentially more branching points. This branched architecture distinguishes PAMAMs and other dendrimers from traditional polymers, as it allows for low polydispersity and a high level of structural control during synthesis, and gives rise to a large number of surface sites relative to the total molecular volume. Moreover, PAMAM dendrimers exhibit greater biocompatibility than other dendrimer families, perhaps due to the combination of surface amines and interior amide bonds; these bonding motifs are highly reminiscent of innate biological chemistry and endow PAMAM dendrimers with properties similar to that of globular proteins [12]. The relative ease/low cost of synthesis of PAMAM dendrimers (especially relative to similarly-sized biological molecules such as proteins and antibodies), along with their biocompatibility, structural control, and functionalizability, have made PAMAMs viable candidates for application in drug development, biochemistry, and nanotechnology [12][13][14]. 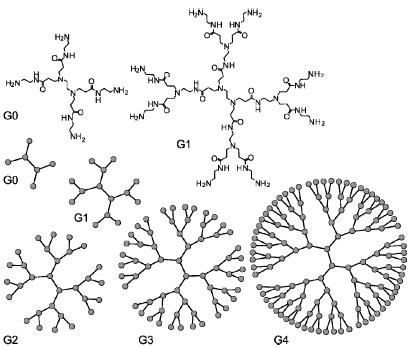 What impresses with the dendrimers is their immense stability and penetration into the molecules. There are thousands of reports about their use in a series of papers in international journals. What is important, however, is that the scientists gave him a Greek name that remains relatively unknown to Greek chemists, and only until 2005 there have been mentioned 5000 papers and dissertations on the various uses of dendrimer.