School-aged extremely preterm (EPT) children have multiple specific neurocognitive/behavioral disorders that are often associated with other disorders; this manifests a true neurobehavioral “phenotype” of prematurity. To determine a profile of cognitive/behavioral impairments in a population of school-aged EPT children (7–10 years-old) without major disabilities, a cross-sectional study was conducted in five medical centers. An algorithm distributed the study population according to four WISC-IV subtests, five NEPSY-2 subtests, and two variables of figure of Rey.

There is a remarkable consistency in outcomes over time and between countries, cultures, and healthcare systems, which provides evidence for a universal “preterm phenotype” associated with the neurodevelopmental immaturity conferred by a VP birth [1]. Relative to those born at term, very preterm (VP) children are at an increased risk for cognitive impairments, attention deficits, and social–emotional problems. However, there is no increased risk for disruptive or oppositional behavioral problems [2]. Moreover, developmental coordination disorders (DCD) are associated with behavioral, cognitive, and/or attention disorders [3][4] in EPT school-aged children who are free from severe deficiencies. In addition, two meta-analyses confirm a high prevalence of psychiatric disorders in children and adults born prematurely as compared to a population born at term. These VP children have a high risk of attention disorders with or without hyperactivity, autism spectrum, and anxiety disorders [1][5]. However, these disorders are always accompanied by cognitive, neurological, and learning comorbidities [6].

As traditionally seen in the literature in cohort populations, the cognitive fate of premature children is usually classified into four groups: (1) absence of incapacity, (2) minor disability, (3) moderate disability, and (4) severe disability, based on data from the total Full Scale Intelligent Quotient (FSIQ) scores. A threshold of ≥89 is considered normal, which is a low average [4][7]. However, the performances observed with a total FSIQ are the result of a complex processes involving multiple intellectual and non-intellectual characteristics (attention, emotions, motivation, movement planning, etc.) [8]. Furthermore, for infants born prematurely, the FSIQ is most often calculated on a dissociated subtest value that is not necessarily reflective of the child’s cognitive function and thus constitutes a false methodology [8]. The analysis of the subtests’ dispersions aims to highlight those that deserve a thorough interpretation. Indeed, a child considered “normal” is likely to have impairments such as a dysexecutive syndrome and/or impaired behavior and/or DCD that could disrupt brain function.

Therefore, most longitudinal studies focus on general mental health classifications rather than individual clinical diagnostic criteria and comorbidity profiles (motor and behavior). Since some outcomes may be deteriorating rather than improving over time, knowledge of all comorbidities may be useful in improving an early identification of the highest risk children in order to address their clinical needs. Inclusion of behavioral difficulties and developmental coordination disorders with the definition of mild neurodevelopmental disabilities describes, in more depth, the complexity of those difficulties faced by these preterm children [9].

In fact, there have been few studies directed on individual clinical descriptions in which discrete or non-specific signs of psychiatric disorders and/or subtle impairments of executive functions occur together and/or are associated with cognitive and/or neurological impairments in school-aged VP children. To our knowledge, only one study of these children who share similar profiles within a group on measurements of intelligence and executive functions does not take into account behavior [8]. The assessment of a true neurobehavioral “phenotype” (NBP) of prematurity, which takes into account not only the FSIQ but also executive functions, neurologic examinations, and behavior should be a principal objective of epidemiological research on prematurity [8]. Finally, no studies have measured this neurobehavioral profile and its social consequences particularly on the QoL of these children.

We categorized 231 children into three clusters (Figure 1) with a mean age of 8.46 (±0.75) years. The FSIQ mean was 91.62 (14.93) (low mean average), and 106 (59.55%) had a dysexecutive syndrome. The mean emotional symptoms were slightly elevated (3.48, 2.42). The comparison between children who had all examinations (psychometric tests of WISC-IV and NEPSY-2, behavioral assessment, and QoL) and those children who had at least one missing data of these examinations did not show any statistical differences (Table S1—Online supporting information). 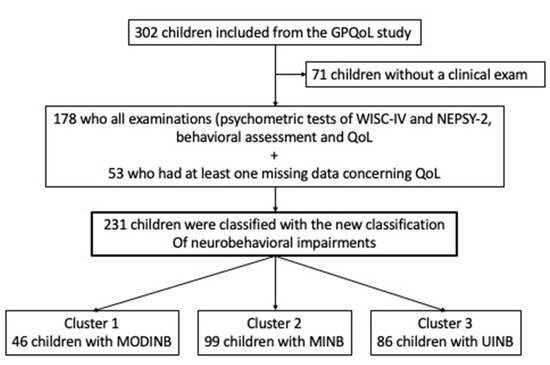 The 231 children were classified according to the severity of their neurobehavioral assessment into three neurobehavioral impairment groups:
Behavior and anxiety were significantly different between each different cluster and with a gradient of severity (Table 1).
Table 1. Characteristics of the clustered pooling population.
Note: Data are expressed in numbers (%) or mean (SD); SD: standard deviation. P: value of the difference between the groups with available data: p < 0.05 *: statistically significant difference. Abbreviations: GA: gestational age; WA: weeks of amenorrhea; SGA: small for gestational age; BPD: bronchopulmonary dysplasia; FAS: family affluence scale. Cluster Classification: Three neurobehavioral phenotype profiles chosen by the algorithm were defined. Cluster 1: Moderate Impaired NeuroBehavior (MODINB), Cluster 2: Minor Impaired NeuroBehavior (MINB), Cluster 3 UnImpaired NeuroBehavior (UINB). Quality of life (QoL) 1: VSP-Ae and VSP-Ap: Perceived life and perceived health of adolescents, quality of life questionnaires (assessments by both the child and parents, respectively). Kidscreen-infants and Kidscreen-parents: quality of life questionnaires (evaluation by children and parents, respectively). For both questionnaires, scores ranged from 0 to 100, with the higher the score, the better the quality of life. Neurocognitive assessment 2: WISC-IV 2a: Weschler Intelligence Scale for Children—4th edition; NEPSY-2 2b: NEuroPSYchological assessment, 2nd edition. Goodman-SDQ (Strengths and Difficulties Questionnaire) 3: score correlated with the Child Behavior Checklist (CBCL) of Achenbach which included 25 items directed toward the parents. The questionnaire reflects a total assessment of the behavioral and emotional problems and defines five subcategories, each composed of five items: (1) Emotional disorder: mean: 0–3, slightly below mean: 4, high: 5–6, very high 7–10; (2) Behaviors: mean 0–2, slightly below average: 3, high: 4–5, very high 6–10; (3) Hyperactivity: mean 0–5, slightly below mean: 6–7, high: 7–8, very high 9–10; (4) Social relationship disorder: mean: 0–2, slightly below mean 3, high: 4, very high 5–10. The total difficulty score is the sum of the first four items. An increase of one point in the total difficulty score corresponds to an increase in the risk of developing a mental disorder. The categories were proposed in order to assess whether the child’s score is in the mean 0–13, slightly below the mean 14–16, high 17–19, or very high 20–40. (5) ”Prosocial” behavior is counted separately and varies in the opposite direction: mean 8–10, slightly below mean: 7, high: 6, very high 0–5. STAIC 4: State–Trait Anxiety Inventory for children. Each STAIC item (Spielberger) constitutes an assigned three-point rating scale with a value of 1, 2, and 3. The final score is obtained by adding the sub-scores for each item and ranges from 20 to 60. The normative data of the STAIC, by age and by sex, were established in the United States (Spielberger, 1973) on the basis of two samples of elementary school children: one sample consisted of 456 girls and 457 boys, in their fourth, fifth, and sixth years of primary school and the other consisted of 281 boys and 357 girls for the same scholastic years. The boy’s group: Anxiety Trait 36.7 SD: 6.32; Anxiety State 31.0 SD 5.71. The girl’s group: Anxiety Trait: 38.0 SD: 6; 68 Anxiety State: 30.7 6.01. Schematically: Standard anxiety state: Normal: 20–40, High Anxiety: higher than 40. Impairment 5: A specific cognitive impairment was considered in the GPQoL study if at least one of the five neuropsychological disorders (classification of mental illnesses according to Diagnostic and Statistical Manual of Mental Disorders, fourth edition (DSM-IV)) was observed: A delay in language was considered if the verbal comprehension index (VCI) 5a was <85, a delay in visuospatial integration was considered if the perceptual reasoning index (PRI) was <85 and Rey figure ≤ 10th percentile, in copy mode 5b, an attention deficit disorder was considered if the auditory attention score was <8 and/or the visual attention score was <8, and if the processing speed index (PSI) 5c was <85, dysexecutive disorders were considered if a working memory index (WMI) was <85 and/or a planning score was <8 and/or a mental flexibility score was <8 and/or inhibition score 5d < 10th; an ideomotor dyspraxia was considered if the Touwen assessment test = complex coordination disorder with anomaly of movement planning and (PRI was <85 and/or IVT was <85) 5e.

In Cluster 1 (MODINB), emotional troubles had high scores (4.05 (2.62)), and hyperactivity was slightly below the mean (5.32 (2.45)). The anxiety score was (35.30 (8.28)), 30 children (65.22%) had language delays, and 44 (95.65%) had a dysexecutive syndrome. The other impairments (visuo-spatial integration delay, attention deficit disorder, and ideomotor dyspraxia) were presents in 15 to 17% of the cases (Table 1).
In Cluster 3 (UINB), emotional symptoms were always below the mean and only 26 (33%) of the children had a dysexecutive syndrome. Dysexecutive disorders were a composite of performance across four subtests: working memory index (WMI) < 85 and/or planning score < 8 and/or the mental flexibility score < 8 and/or inhibition score < 10th. It may be that some children had slightly lower performances (just less than −1 SD) on just one of these tests over −1 SD (Table 1). 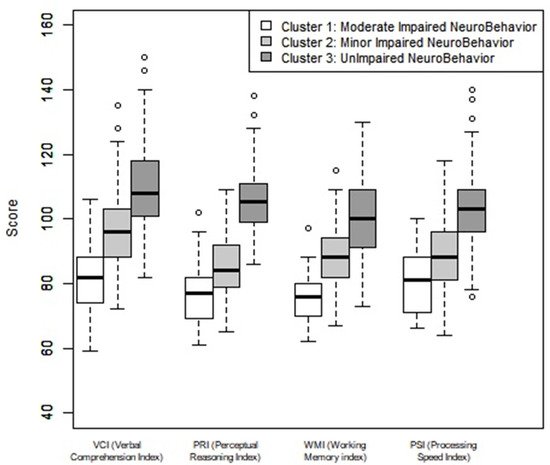 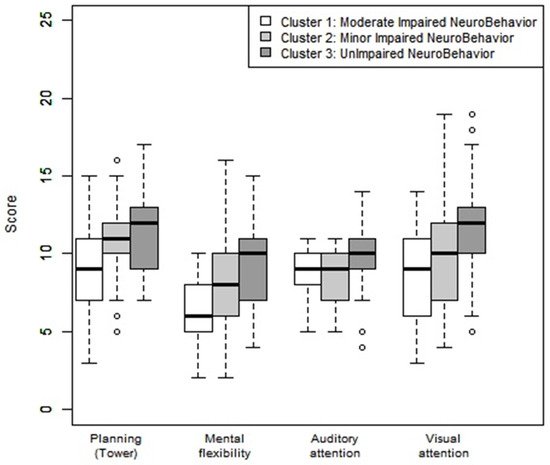 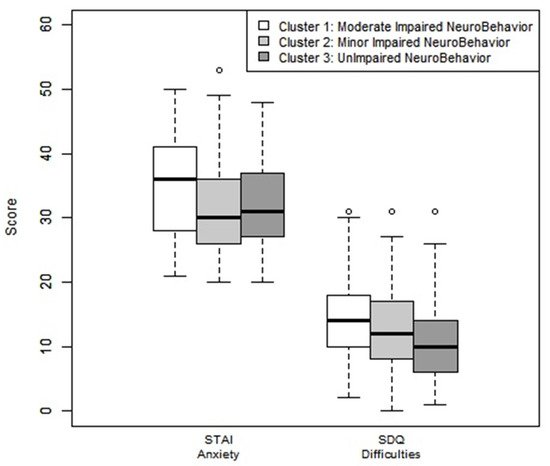 2.5. Correlation of Population Study and Quality of Life

The QoL was reduced for all children when compared to the reference population. The exceptions to this were the relationships with the family and the teacher, as evaluated by the parents. For the children, the areas impacted were ranked as (1) Self-esteem, (2) Relationship with friends, and (3) Hobbies. The parents cited the areas most impacted for their children were (1) Psychological well-being, (2) School-work, and (3) General well-being (Table 2).
Table 2. Quality of life comparisons of studied (n = 178) between cluster and reference populations.
Note: a Reference population: French reference population from the European database of 2003 which included a French sample (n = 989) obtained by randomized telephone calls (CATI method: Computer-Assisted Telephone Interview; RDD: Random Digital Dialing). 1 VSP-Ae and VSP-Ap: Perceived Life and Health of Adolescents, quality of life questionnaires (assessments obtained by the child and by the parents’ perspective of their child). The scores vary between 0 and 100. A high score indicates a better quality of life. 2 Kidscreen-infants and Kidscreen-parents Index-10 abridged version: quality of life questionnaires (evaluation by children and by parents’ perspective of their child). Scores range from 0 to 100. The higher the score, the better the quality of life. p < 0.05 *: statistically significant difference. 3 Effect size: Ranked by decrease in quality of life in each area for VSP-Ae and VSP-Ap. Standardized size effect was obtained by dividing the average difference by the standard deviation. 1, 2, and 3 and indicate the top 3 variables in the quality of life areas most affected. Cluster classifications: a classification in three neurobehavioral phenotype profiles was chosen by the algorithm. b Cluster 1: moderate impairment neurobehavior (ModINBP), c Cluster 2: minor impairment neurobehavior (MinINB), d Cluster 3: UnImpaired NeuroBehavior (UINB).

2.5.1. Quality of Life Comparisons between the Neurobehavior Impairment Clusters

There are significant QoL differences between the clusters (as indicated by the total VSP-A index), in self- and hetero-evaluations. The QoL deterioration is determined by the severity of the three neurobehavioral “phenotypes”, which are defined as well as by dysexecutive and/or behavioral disorders. The areas most specifically concerned were the school-work and self-esteem categories (Table 2).

UINB as compared to the reference population (Table 2). There was a significant reduction in the QoL in Cluster 3, as compared to the reference population. The most impacted areas for the children were (1) Relationships with friends, (2) Leisure, and (3) General well-being. From a parental point of view, the areas most affecting their children were (1) Psychological well-being, (2) General well-being, and (3) Vitality. The area of school-work was not impacted.