Minor splicing plays an important role in vertebrate development. Zrsr1 and Zrsr2 paralog genes have essential roles in alternative splicing, mainly participating in the recognition of minor (U12) introns. Mice embryos with mutations in both splicing factors stopped developing mainly between the 2- and 4-cell stages, just after zygotic gene activation. RNA-seq analysis of Zrsr1/2mu 2-cell embryos showed altered gene and isoform expression of thousands of genes enriched in essential gene ontology terms and biological pathways related to ribosome, RNA transport, spliceosome, and essential zygotic gene activation steps. Alternative splicing of both U2 and U12 intron-containing genes was altered related to cell cycle and mitotic nuclear division. Zrsr1 and Zrsr2 were also required for the conversion of mouse-induced pluripotent stem cells into 2C-like cells. Zrsr1 and Zrsr2 emerge as necessary for zygotic gene activation and the conversion of induced pluripotent stem cells into 2C-like cells.

Alternative splicing (AS) is an essential co- and post-transcriptional process through which multiple transcripts are generated from a single gene. There are two splicing machineries: the major class or U2-dependent spliceosome, which removes the majority of introns (U2-type intron); and the minor class or U12-dependent spliceosome, which removes U12-type introns. U12-type introns represent around 0.4% of all introns in the genome [1], and are non-randomly distributed across the genome. Despite their scarce abundance, minor introns are highly conserved across distantly related eukaryotic taxa, indicating their common evolutionary origin [2][3]. Minor splicing has been by far less studied than canonical splicing, and although at first it was described as a cytoplasmatic mechanism [4][5], several studies have refuted this theory [6][7][8]. However, some level of cytoplasmatic splicing has been described in strongly compartmentalized cells, such as neurons or megakaryocytes [9], but its function remains unclear.

Further, genes with U12 introns are over-represented in functions and pathways related to development, such as RNA processing, DNA replication, or cell cycle [10][11], and they show tissue-dependent intron retention [12]. Several mutations of the minor spliceosome have been associated with multiple diseases, including developmental disorders [10][13][14][15][16], neurodegeneration [17], and cancer [18]. Additionally, the minor spliceosome is thought to play an important developmental role in plants [19][20][21], drosophila [22], zebrafish [23], and in the mouse central nervous system [24][25], hypothalamus [26], gametogenesis [16], and early development[27]. Genes involved in mRNA splicing are over-represented during early preimplantation development [28], before and during zygotic gene activation (ZGA) [29]. However, the specific role of minor splicing in preimplantation embryo development has not been fully elucidated.

The splicing factors ZRSR1 and ZRSR2 (encoded by the Zrsr1 and Zrsr2 genes, respectively) have been identified in all mammalian species analysed [16][30], and are involved in the recognition of the 3’AC dinucleotide of the AT-AC class of U12-type introns or the 3’AG of U2-type introns [31]. Recent sequencing studies have identified frequent somatic ZRSR2 mutations in hematological malignancies, such as myelodysplastic syndrome (MDS), causing mis-splicing of U12 introns [18]. However, their precise role in embryo development and function in other pluripotent cell types remains unclear. Zrsr1 is a retrotransposed copy of X-linked Zrsr2 (located on the X chromosome in all mammalian species analysed) and is paternally expressed in the placenta and some adult tissues, while the maternal copy is methylated and silent. Zrsr1 plays a key role in hematopoiesis, muscle strength, and spermatogenesis, leading its mutation to infertility [16].

To gain further insight into the role of Zrsr1 and Zrsr2 in preimplantation development, in the present study we generated Zrsr1 and Zrsr2 mutant mice, truncating their RNA recognition motif. Double mutants produced by crossing males homozygous for the Zrsr1 mutation with females homozygous for the Zrsr2 mutation (hereafter named Zrsr1/2mu) stopped developing just after ZGA. Rescue experiments in which Zrsr1 mRNA was injected into single-cell Zrsr1/2mu embryos extended the development of mutant embryos, revealing that minor splicing is essential for ZGA. A clear complementarity action between ZRSR1 and ZRSR2 during 2-cell embryo cleavage was observed, as embryos need at least one Zrsr1 wild-type (WT) allele from the father (as it is maternally imprinted and only expressed from the paternal allele) or one Zrsr2 WT allele from the mother (as only Zrsr2 is expressed in the oocyte and the embryo needs the protein during early stages of development).

RNA-seq analysis of the transcriptome of Zrsr1/2mu and WT embryos revealed a large number of overexpressed genes in the double mutant embryos that are supposed to be degraded during early embryo development [32][33], suggesting that the mutations cause a blockade in the degradation of the oocyte’s maternal mRNAs. Intron retention was affected for both U2 and U12 introns, being exon skipping also altered. Differentially retained U2 introns located within U12-containing genes were located preferentially adjacent to U2 introns, suggesting an interplay between the major and minor spliceosomes, which goes in accordance with the results showed by Horiuchi et al, 2018 [16]. We also analysed the role of Zrsr1 and Zrsr2 in the conversion of induced pluripotent stem cells (iPSCs) to 2C-like cells (2CLC), which are a rare metastable cell population that appears at a very low frequency in mouse embryonic stem cells (mESCs) and iPSCs in culture. We discovered that both Zrsr1 and Zrsr2 are necessary for the generation of 2CLC, and contrary to what happens with the embryos, Zrsr1 and Zrsr2 are not complementary in iPSCs, as both are required for the induction of 2CLC.

The different pleiotropic phenotypes of U12 splicing factors have made it difficult to identify unifying developmental functions of U12 intron-containing genes. There are several events common to gametogenesis and preimplantation development at the precise moment Zrsr1 and Zrsr2 are expressed that are critical. First, Zrsr1 and Zrsr2 are expressed in gametogenesis during the meiotic prophase, which is equivalent to a prolonged G2 phase in the mitotic cell cycle [34]. Similarly, the G1 phase is extremely short, while G2 is very long during the second preimplantation division in mouse embryos, when the major phase of ZGA takes place [35] and Zrsr1 is specifically expressed. The gene Zscan4 is also expressed in oocytes and spermatocytes during the late meiotic prophase, in G2 phase ES cells and in late 2-cell stage mouse embryos [36]. Its expression is associated with heterochromatin organization [37]. Interestingly, the small proportion of genes with U12 introns in vertebrates is over-represented in specific G2 phase functions like DNA replication, cell cycle, and DNA damage repair. The disruption of multiple cell cycle and DNA damage repair genes would be expected to cause defects in cell differentiation. Another common event between meiosis, ZGA and iPSC conversion in 2CLC is the alteration in the structure of the nuclear membrane. In addition to nuclear break down that occurs in meiosis, nuclear lamina is rearranged during stem cell differentiation [38], and the nuclear envelope breaks down after the two pronuclei undergo DNA replication, and chromosomes then associate during the first mitosis [39].

According to our results, the Zrsr1/2mu phenotype observed in embryos and iPSC could be the outcome of one of several disrupted procedures: dysregulation of U12-type intron-containing genes, the disruption of AS, and/or the altered expression of other genes. Our gene ontology (GO) analysis of U12 intron-bearing genes with alterations in intron retention in Zrsr1/2mu embryos revealed the strong enrichment of genes related to key cellular functions such as cell cycle, mitotic nuclear division, DNA damage repair, RNA processing, etc., highlighting the importance of these genes in the 2-cell blockade. However, Zrsr1/2mu also indirectly modified the expression of many other genes reported to play an important role in embryo cleavage and iPSC conversion to 2C-like cells, some of them carrying U12 introns. For example, one important gene for reprogramming the conversion from mouse embryonic fibroblasts (MEF) to iPSC is the epithelia-splicing factor Esrp1 [40], a marker of several cancers [41] that has an U12 intron. In our Zrsr1/2mu embryos, Esrp1 showed AS alterations in ES and IR of the U12 intron. In the same manner as Esrp1, the genes Zrsr1 and Zrsr2 were necessary for iPSC reprogramming to the 2C-like state, but were not required for maintenance of pluripotency, as we could maintain Zrsr1 and Zrsr2 mutant iPSC lines indefinitely without loss of viability. Another gene down-regulated in the Zrsr1/2mu embryos was Dppa3 (also known as Stella), a marker of pluripotency and cell division that ensures activation of endogenous retroviruses (ERVs) [42]. Cnot7 (also known as Caf-1) controls ERVs and genes specific to 2-cell embryos, and its depletion in ESCs enhances the reprogramming of 2C-like cells [43]. This gene also showed AS alterations in ES and IR in Zrsr1/2mu embryos. Also, the Developmental pluripotency associated genes 2 (Dppa2) and 4 (Dppa4), which are positive regulators of 2C-like cells and ZGA transcription by directly up-regulating Dux [44], were down regulated in Zrsr1/2mu embryos. Other genes showing high intron retention in mutant embryos were Srsf10 and Cul1. Srsf10 is required to implement DNA damage-induced splicing shifts in other transcripts involved in apoptosis, cell-cycle control and DNA repair, indicating that SRSF10 connects DNA damage to the alternative splicing of transcripts that determine cell fate [45]. Cul1 is the major scaffold of the SCF complex (Skp, Cullin, F-box), an E3 ubiquitin ligase that contributes to the regulation of many cell processes, including proliferation, differentiation and death, by targeting its substrate proteins for degradation via the ubiquitin-proteasome system [46].

This comprehensive analysis of Zrsr1/2mu mouse embryos reveals a new role of paternal Zrsr1 and maternal Zrsr2 as components of the ZGA mechanism in the embryo, as mutation of either Zrsr1 or Zrsr2 blocked the reprogramming of iPSCs towards 2CLC (Figure 1). Accordingly, Zrsr1 and Zrsr2 emerge as essential for stem cell differentiation during gametogenesis [16], totipotent zygote differentiation (ZGA) and reprogramming of iPSCs towards 2CLC, suggesting a critical role of minor splicing in the stem cell reprogramming process. 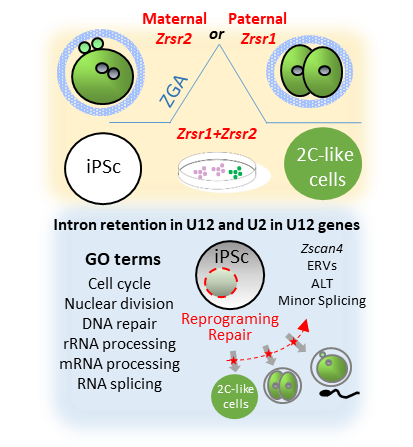 Figure 1. Synopsis of phenotypes produced by Zrsr1 and Zrsr2 mutations. Upper panel shows that mutation of maternal Zrsr2 and paternal Zrsr1 blocked early embryo development during zygotic gene activation (ZGA) and increased intron retention in U2- and U12-containing genes; and that mutation of either Zrsr1 or Zrsr2 led to a blockade of induced pluripotent stem cell (iPSC) conversion to 2C-like cells. The bottom panel shows gene ontology (GO) enrichment terms related to these phenotypes, indicating that disturbed U12-containing genes are critical for cell division, differentiation, and DNA damage response.