A Unified Treatment of Tribo-Components Degradation

According to the degradation-entropy generation (DEG) theorem, material degradation is irreversible and always accompanied by entropy generation. When applied to the degradation of a tribo-component, the DEG theorem relates the rate of change in wear volume to thermodynamic force via a parameter known as the degradation coefficient B. The efficacy of the B over the well-established Archard coefficient has been experimentally demonstrated for tribo-components that experience wear under running-in and steady-state operating conditions. The steady wear includes uni-directional, bi-directional, uniform, and variable operating conditions.

Having analyzed 300+ models and equations describing wear and friction from 5466 reports, Meng and Ludema[1] concluded that no unified wear equation exists that can characterize various types of wear. Archard equation[2], the most widely accepted wear model, provides a satisfactory prediction for steady-state adhesive wear under dry operating conditions[3][4][5]. However, the quantitative predictions of the Archard equation for many processes—e.g., running-in[6], non-metals such as composites[7], situations that involve variable loading[8], etc.—tend to substantially deviate from measured values. The challenge in developing unified wear equations arises due to the dependence of the wear behavior on the operating conditions, interfacial adhesion/friction conditions, and the physical, chemical, and mechanical properties of the contacting pairs[9][10][11].

Recent research shows that different types of degradations—e.g., batteries[12], greases[13][14][15], mechanical fatigue[16], etc.—are always accompanied by the generation of entropy.  The proof of concept studies[17][18][19][20] has also established that the degradation of the tribo-components by material removal can be characterized effectively using the framework of irreversible thermodynamics.

Considering the correlation between the degradation and entropy generation, Bryant et al[21] proposed a generalized theorem called degradation entropy generation (DEG) to characterize the degradation of materials. A proportionality coefficient called the degradation coefficient B emerged from the DEG theorem that directly related the irreversible degradation of the tribo-components to the entropy generation via the generalized entropy flow and degradation force. Amiri and Khonsari[22] and Bryant[23] discussed the possibilities of developing a unified wear model using the DEG theorem and B values for different wear processes[24]. However, until recently, sufficient experimental validation was lacking to demonstrate its efficacy in practice. In what follows, we show that the recent advances in tribology have largely addressed these limitations by both in-depth theoretical and experimental investigations.

As a first step towards developing a unified wear approach, the present work focuses on understanding different wear models and their capability in characterizing the degradation of tribo-pairs experiencing (i) uni-directional or bi-directional motions; (ii) uniform and variable operating conditions, and (iii) time-dependent or transient operating conditions, such as running-in.

The adhesive wear mechanism was first investigated by Holm[25] for electric contacts from the perception of the real contact area. The volume of material loss wvol is considered proportional to the applied load P, sliding distance x, and inversely proportional to the hardness H of the softer material. The expression for wear volume is provided in Equation (1)

where k is a nondimensional proportionality constant called wear coefficient. Later Archard[2] and Rabinowicz[26] attributed the wear mechanism as the removal of particles due to the fracture of the junction itself. The wear equation introduced by Archard[2] (Equation 2) has the same form as Equation (1) and requires determining the wear coefficient K by performing pin-on-disk measurements. The parameter K is called the Archard wear coefficient. It is defined as “the probability that the asperities of the tribo-pair in sliding motion will deform plastically and wear out.” Archard equation has been extensively used to predict the wear of tribo-pairs in the sliding contact[9][11][27].

where V is the sliding speed. The values of K vary from 10−15 to 10−1, depending on the operating conditions and material properties. Welsh[28] and Vancoille[29] stated that the value of K varies up to two orders of magnitude, just by making small changes in the operating conditions. Such drastic variations in K values make it difficult to predict and validate experimental results. Researchers nowadays agree that a systematic study on the K values is needed to better understand and characterize the wear behavior of tribo-components[30].

can effectively characterize the adhesive wear. However, these complicated models demand the determination of several variables, including the surface profile and its parameters. These factors make it very difficult for the practitioners to implement for estimating adhesive wear.

On the other hand, thermodynamic-based approaches[34][35][36] provide wear models that directly correlate the degradation of a tribo-pair due to wear with entropy flow. The wear model using DEG theorem is one such wear model developed using thermodynamic principles and is provided in Equation (3).

where μ is the friction coefficient and T is the contact temperature. Now, comparing Equations. (2) and (3) it can be concluded that the Archard equation is subsumed in the degradation−entropy relationship obtained from the DEG theorem. Therefore, it can be hypothesized that the degradation of the tribo-pairs can be effectively characterized using the DEG theorem. The equations for B and K for different sliding directions and operating conditions are provided in Table 1. Apart from these models, other adhesive wear equations employed to characterize the adhesive wear are presented in our recent work[37].

3. Efficacy of Degradation Coefficient B

Bryant and Khonsari[40] were the first to experimentally validate the correlation between wear and entropy flow through B via Equation (3). Followed by their study, Lijesh and Khonsari[34] demonstrated the efficacy of the B over K by considering the experimental results from Aghdam and Khonsari[41] and Amiri et al[42]. The results are plotted in Figure 2.

Numerous engineering components in the industry are subjected to varying loads and/or operating speeds. As a result, these components often tend to degrade faster than uniform operating conditions[43][44][45]. The variations in operating conditions are responsible for significant damage and shorten the service life of bearings and gears[46][47].

Using the experimental results from Akbarzadeh and Khonsari[48], Lijesh and Khonsari[49] established the efficacy of the B over K, for the tribo-pair experiencing variable loading. The comparison of the measured and estimated wear values using B and K is provided in Figure 3. From this figure, it can be observed that the DEG theorem can reliably characterize the wear of tribo-pair experiencing variable loading. 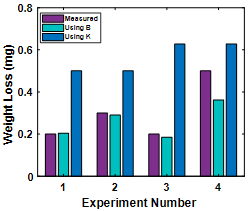 Figure 3. Comparison of weight loss between the measured and predicted weight loss using K and B from the data[49]

Lijesh and Khonsari[49] extended their study and demonstrated the efficacy of the B in characterizing the variable sliding speeds and arbitrary combination of both load and sliding speed.

The results presented in Section 3.2 focused on uni-directional sliding motion. However, in practice, many machines—such as engines, pin-bushings in excavators, drag liners, etc.—experience either reciprocating or oscillatory motion that necessitates characterizing wear bi-directional sliding[50][51][52]. Research shows that applying the Archard equation to assess wear in such conditions does not yield satisfactory results. The reason is often attributed to factors such as the variation in friction force, wear mode, displacement amplitude, contact geometry, etc. In contrast, the degradation coefficient, which includes friction coefficient, temperature, wear, and operating conditions effectively characterizes the degradation in bi-directional motion.

The hypothesis is demonstrated using the experimental data from Rajeev et al.[53], and Aghdam and Khonsari[54]. The comparison of the measured and estimated wear values using the DEG theorem is provided in Figure 4. The results of Figure 4 suggest that wear values obtained using B can accurately predict the degradation of tribo-pair experiencing bi-directional sliding with the uniform sliding condition. 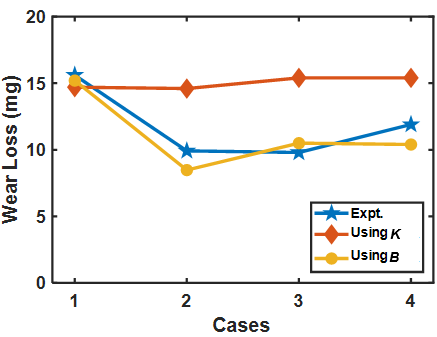 Figure 5. Comparison of wear loss from the experiment and determined using K and B [55]

The results of extensive tests suggest that the degradation coefficient can effectively characterize the degradation of tribo-pair involving uni-directional, bi-directional, transient operating conditions (e.g., during the running-in period), and variable loading/speed sequencing. However, research is needed to describe the path forward for analyzing more complex forms of wear involving multiple modes— e.g., combined adhesive and abrasive wear, mild to severe wear arising that leads to scuffing, galling, smearing, and seizing—and wear in boundary- and mixed-lubricated regimes

The capability of DEG theorem (developed according to the thermodynamic principles) in providing a unified wear model is discussed. The DEG theorem relates the degradation of the tribo-pair to the entropy generation through the degradation coefficient B. The study focused on tribo-pair degradation due to the adhesive wear prevalent in different directions of sliding motion (uni- and bi-directional), operating conditions (uniform and variable loading/speed), and transient wear. To establish the efficacy of B, the results of many recent reports were reviewed from the perspective of both theoretical and experimental validation. It is shown that the DEG theorem is able to correlate the degradation due to wear better than the Archard coefficient.