Awns are a transformed leaf blade that extends from the lemmas of the florets, and can contribute significantly to the grain filling via active photosynthesis. Barley awns are highly diverse in morphology, ranging from long to short or awnless types, and from straight to hooded or crooked shapes. The morphological diversity, importance to grain yield and ease of study of barley awns have intrigued plant geneticists for several decades. A large set of genetic loci associated with the development of awns have been identified genetically and mapped to chromosomes.

To be, or not to be, that is the question. With this soliloquy, William Shakespeare once pondered, through Hamlet’s words, upon a state of being or not being, a forever lasting philosophic question about life and death. A similar balance about awnness or awnlessness should have puzzled our human ancestors some 8000 years ago when barley (Hordeum vulgare L.) was domesticated. Wild grass species, including wild barley (Hordeum spontaneum), are mostly awned, whereas their cereal crop relatives vary. Domestication has led to the disappearance of awns from most popular cultivars of rice and wheat, while, on the contrary, most modern barley varieties still preserve awns. The awn on the barley spike has no nutritional value and can cause lacerations in the mouth of animals. One of the most important breeding goals for forage barley is the elimination of the awn without reducing the grain yield. A better understanding of the genetic basis for awnness is key to advancing breeding programs aimed at barley cultivars with special awn types. Although environmental conditions affect awn development to a certain degree, the question of ‘to awn or not to awn’ is largely answered by the genetic composition of the barley genome. The inheritance of the awn trait in barley has been a topic of genetic study for several decades, primarily due to the importance of the awn to grain yield and its hindrance in forage quality and palatability [1]. The specific objectives of this review are to provide an update of research work conducted by various groups in the field of awn development and inheritance over the last several decades, with a focus on the recent progress in genetic loci underlying awnness that have been identified, mapped or cloned in barley. The complexity of gene–gene interactions and pleotropic effects of awn loci are analyzed and the perspectives of future research work in this field are presented in this review.

In addition, the awn is not an essential organ for the survival and reproduction of barley, allowing awn shape to vary dramatically through natural selections and chemical mutagenesis. The awn protrudes from the canopy in fields and morphological differences are easy to score, leading to large collections of abundant germplasm resources of awn mutants. In addition, barley represents an excellent model for genetic research of crops: it is diploid with a low chromosome number (2 n = 14), can be both inbred and outbred easily, and adapts to diverse climate conditions [2][3]. The completion of the barley genome sequencing project [4][5][6] has facilitated identification and cloning of agronomically important genes, such as the row-type locus VRS3 [7][8].

The diversity and development of awns in barley have long been a topic of genetic research and now are subjects of intense molecular biology and genomic studies [9][10]. Based on the presence of awns, barley germplasms can be divided into awnless and awned types, with the latter subdivided further into hooded, leafy, straight and crooked phenotypes (Figure 2). The straight awns (single or triple) can be long, short or awnlet, while the hooded ones can be classified as either normal hooded, elevated hooded, or subjacent hooded. Furthermore, barley awns do not behave consistently in spikelets between the central and lateral rows of the same spike. For example, when the central row develops long awned spikelets, the lateral row can be short awned or even awnless. When both the central and lateral rows develop long awns, the awns in the lateral rows are generally a little shorter than those of the central rows. Hooded awns have their own unique structures, which can sometimes develop inverse, fertile flowers capable of producing seeds [9][11]. The striking inverse flower of hooded awns is thought to be the result of the transformation of the awn into reiterative inflorescence axes [12]. Subjacent hooded awns are similar to the hooded ones, but differ by bearing distal awns without an epiphyllous flower, reflecting differing degrees of phenotypic penetrance [13]. In anatomy, the awn is a transformed leaf blade, as illustrated in the leafy lemma mutant (Figure 1K). Barley germplasms from the Tibet plateau have been shown to exhibit highly diverse awn characteristics, ranging from long awns on central rows but long, short, or no awns at all on lateral rows. Similarly, other cultivars can have short awns on the central row with short or awnless on the lateral row, hooded awns on the central and hooded, short or awnless on the lateral, to completely awnless on both the central and lateral rows [14][15]. 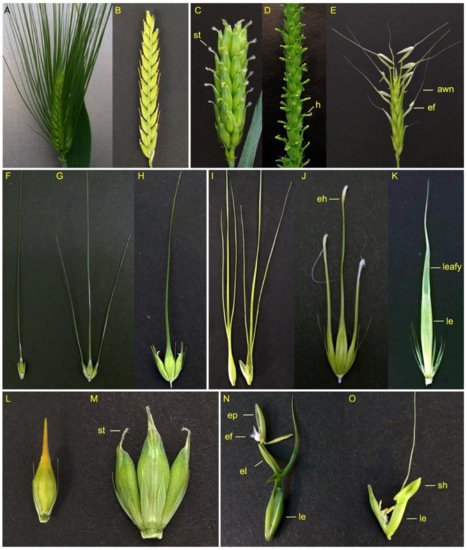 a Location of the short (S) and long (L) arms of chromosomes. b Reference (ref.) sources. c ND: chromosome location not determined.

Lks1 (awnless) was once considered to be the same as vrs1, since they are closely linked on 2HL. This linkage has also complicated the fine mapping and gene cloning of Lks1. The awn inhibitor gene B1, which is dominant and inhibits awn development, has recently been cloned in wheat by several independent groups [32][33][34][35][36]. The wheat B1 gene encodes a putative C2H2 zinc-finger protein with an EAR domain that is characteristic of transcriptional repressors. The cloning of wheat B1 may facilitate cloning of barley Lks1, because the synteny of their locations on chromosomes between barley and wheat may provide useful hints for gene cloning.

The length of awns is controlled by the interactions of several awn genes, including lr1 (for reduced length of lateral awns), lks5 (or lk5, for short awn 5) and lks2 (or lk and lk4, for short awns) [37][38]. The genetic effect of Lr1 is more prominent than that of Lks5, while Lks2 and Lks5 act additively to regulate awn length [31][37][38]. Thus, the interactions among these three awn genes play critical roles in the determination of awn length in barley.

Of the 12 awnness loci, both the awnless gene Lks1 and the hooded awn gene Kap1 or sbk1 may become important targets for feed barley improvements. Because the awn is an undesirable trait in feed barley, it has been proposed that the awnless gene Lks1 could be introduced to feed barley cultivars. However, this strategy is currently met with the challenge that the available Lks1 mutant is associated with reduced grain yield. The Kap1 gene appears to be a more suitable target gene for feed barley, because its mutant does not exhibit reductions in grain yield. In the USA, new barley cultivars containing Lks1 or Kap1 have been released for forage uses. If the reduction of grain yield cannot be resolved in awnless barley cultivars, one of the alternative approaches is to target short awn or hooded awn genes for improvement in forage breeding programs.

Genetic pleiotropism describes the effect of a single gene on multiple, unrelated traits. The mutation of a pleiotropic gene may thus lead to changes in several seemingly unrelated attributes of an organism. For mapping analysis, it is critical to distinguish the pleiotropic effect of one gene on multiple traits from a close linkage of two independent loci. For a long time, it has been believed that the awnless gene Lks1 on chromosome 2H may be allelic to the row-type locus vrs1, and that the awnless phenotype and the six-row spike trait were just the result of pleiotropic effects of the same locus. This assumption was made on the basis of the lack of recombination between the two loci when a line with a dominant short awn gene Lks1 and the two-rowed gene Vrs1 is crossed with another line having long awns and six-rowed spikes (lks1/lks1 vrs1/vrs1) [30][39][40]. However, further genetic analysis has suggested that the two loci are independent but closely linked and lie near a paracentric chromosome inversion that may inhibit recombination between them [41].

The pleiotropic effects of short awn genes are especially common. A QTL, qAL/SL/GD3.1, has been shown to control all three traits of grain density, spike length and awn length [42]. The dwarf gene uzu1 has pleiotropic effects on the length of leaves, culms, rachis internodes, awns, glumes and kernels [43]. A dwarfing gene closely linked to uzu1 on chromosome 3H, is pleiotropic for short spikes, short awns and high grain density [44]. Allelism tests show that lks2, which reduces the awn length to about one half of the normal length (Lks2), is allelic to the unbranched style 4 (ubs4), which also displays sparse stigma hairs [22]. The short awn gene lks5 on chromosome 4H has pleiotropic effects on the spikelets and produces extra florets [45].

Understanding the pleiotropism of awn genes will facilitate elucidation of how they function in awn development. Most awned varieties in barley and wheat have higher yields than awnless ones because of the grain-filling function of awns in photosynthesis [46][47]. Despite the overall higher potential of awned cultivars, there are awnless or short awned varieties that have good performance in yield in some ecological areas [48]. This unexpected high yield of half-awned or awnless varieties has been attributed to the high kernel number per spike, not to grain size [49]. Awnless or short awn traits normally decrease the size of grains but increase the number of spikelets/florets per spike [49]. However, the awned trait usually reduces the grain number and increases the grain size and harvestable yield [48][50]. The wheat awnless gene B1 also decreases kernel weight, kernel length and test weight, but increases the number of spikelets per spike [33]. Overexpression of the barley HvFT3 accelerates the initiation of spikelet primordia [32], and HvFT3 is believed to act upstream of the row type genes vrs1, vrs4 and int-c [51]. Therefore, awn genes not only regulate awn development, but also play important roles in other physiological and developmental processes such as grain filling and specification of spikelet initiation and row types.

The recent completion of the barley genome sequencing project, together with the application of novel sequencing and bioinformatic technologies, will greatly facilitate fine mapping and gene cloning of awn loci in barley. More and more awn genes will soon be cloned and characterized at the molecular biology and biochemistry levels. A better understanding of the molecular nature of awn genes would pave a solid foundation for further investigations on gene-gene interactions and molecular mechanisms of awn and grain development. These studies would eventually benefit barley breeders in developing new cultivars with improved yield and adaptability to various environmental conditions.