Relationship between Saliva and Sublingual Immunotherapy

Sublingual immunotherapy (SLIT) can induce the clinical remission of patients from IgE-mediated allergic diseases, but not all patients who undergo SLIT experience substantial improvement in their allergic symptoms. As biomarkers to predict the efficacy of SLIT have been investigated, some of the salivary microorganisms which turn out to be associated with the efficacy of SLIT are detected, and these microorganisms may be used as adjuvants for SLIT in the future.

Allergen-specific immunotherapy (AIT) can not only reduce allergic symptoms but also induce the clinical remission of patients from IgE-mediated allergic diseases including allergic rhinitis (AR), atopic asthma and venom allergy [1][2][3]. AIT consists of several routes of administration such as subcutaneous immunotherapy (SCIT) and sublingual immunotherapy (SLIT), and the demand for SLIT is increasing rapidly because it has fewer adverse effects and offers more convenience for patients than SCIT. The effectiveness of SLIT is reported to be similar to that of SCIT, but not all patients who undergo AIT experience substantial improvement in their allergic symptoms [4]. Biomarkers to predict or monitor the efficacy of SLIT have been investigated. Saliva may be important in SLIT because tablets used in SLIT first come into contact and react with the saliva in the sublingual site. Since a saliva sample is easy to collect without any pain for patients, it would be useful if there was evidence to support its potential to become a biomarker of SLIT. Saliva contains various microorganisms and establishes a local microbiome, and patients with not only local disorders such as dental caries or periodontal diseases but also systemic disorders such as allergic, inflammatory or malignant diseases are reported to have dysbiosis in their saliva [5][6][7]. The salivary microbiome may have some effects on the immune system and also on SLIT. According to the development of research on the salivary microbiome, the discovery of microorganisms which can be used as biomarkers to predict the effectiveness of SLIT and of probiotics to improve the outcome of SLIT is expected.

2. Effects of Salivary pH on Immunity and Sublingual Immunotherapy

Saliva’s chemical properties may affect the immune system in the oral cavity. Saliva’s normal pH range is reported to be between 6.0 and 8.0 in healthy young adults [8]. Saccharolytic bacteria such as certain Streptococcus, Actinomyces and Lactobacillus species generate organic acids [9][10]. Arginine deiminase pathway (ADP)-positive bacteria such as certain species of Streptococcus and Lactobacillus maintain pH homeostasis in the oral cavity through alkali production [11][12]. The low reactivity of salivary IgA with Candida albicans cells grown at acidic pH values has been reported [13]. Another report showed that uric acid, the main antioxidant of saliva, and also salivary pH were significantly lower in HIV-infected individuals [14]. These results suggest that saliva with an acidic pH is associated with immune depression. Protein release from peanut flour at various pH values of saliva-like buffer was investigated, and the result showed the minimum extraction of proteins between pH 3 and pH 6, while protein extractability was high at both lower and higher pH values [15][16][17]. These results suggest that saliva with an acidic pH leads to poor solubility of allergen proteins used in SLIT. However, an association between salivary pH and the efficacy of SLIT has not been reported, and future investigation is desirable.

Human monocytes are reported to produce IL-10 in response to saliva, and IL-10 production is associated with signals through TLR2 and TLR4 [18]. These results show that saliva which contains the oral microbiome is highly associated with immunity. On the other hand, salivary IgG4 and IgA are increased in response to SLIT, as shown above. Because the tablet used in SLIT first comes into contact with the oral cavity or saliva, the salivary microbiome may have some effects on SLIT. With the use of the metagenomic sequencing technique, organisms in the salivary microbiome of Japanese cedar-allergic rhinitis patients were shown to be mainly composed of Firmicutes (median: 38.4%), Bacteroidetes (median: 16.9%) and Proteobacteria (median: 14.4%). On the other hand, in non-allergic controls, the composition ratios of Firmicutes, Bacteroidetes and Proteobacteria were 31.8%, 9.6% and 37.3%, respectively. The composition ratio of Bacteroidetes in the saliva was significantly higher compared to the non-allergic controls, and the composition ratio of Bacteroidetes, especially Prevotella species, was also shown to have a positive correlation with IL-10 production in cedar pollen-allergic patients. The composition ratios of Bacteroidetes and Prevotella were also significantly higher in asymptomatic patients showing a visual analog scale (VAS) of 0 after SLIT compared with symptomatic patients showing a VAS above 0 after SLIT [19]. VAS is well validated for the measurement of AR symptoms and correlates well with allergic rhinitis and its impact on asthma (ARIA) severity classification; it also correlates well with the reflective Total Nasal Symptom Score (rTNSS) and rhinoconjunctivitis quality of life questionnaire (RQLQ) [20]. These results suggest that Prevotella in the salivary microbiome may have some effects in inducing IL-10 production and in reducing allergic symptoms (Figure 1), and it may be able to be used as an adjuvant for SLIT. The Lactobacillus genus is commonly reported as probiotics to engage receptors such as TLR2 and TLR4 [21]. Some Lactobacillus species work as adjuvants in SLIT experiments using mice with asthma [22][23]. On the other hand, certain Lactobacillus species increase the antibody responses to an allergen after it is used as a probiotic in SLIT [24]. Since not all allergic patients benefit from SLIT, and also due to the fact that SLIT takes a long time to express the effect of symptom reduction, these microorganisms improving the efficacy of SLIT may potentially be used as adjuvants for SLIT. In addition, SLIT may have the potential to alter the human microbiome, although we found one clinical report showing that the nasal microbiome was not significantly different between AR patients with and without allergen immunotherapy [25]. We would like to investigate the difference between the salivary microbiome in AR patients before and after SLIT in addition to healthy controls. Further research regarding the relationship between immunotherapy and the microbiome is needed. 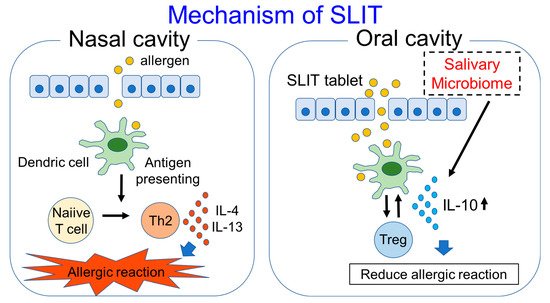 Figure 1. Mechanism of SLIT and participation of salivary microbiome in SLIT are shown in this figure.
The demand for AIT, especially SLIT, is increasing because of its efficacy in inducing clinical remission of allergic diseases and its low risk of side effects. Since not all patients that undergo SLIT demonstrate an improvement in allergic symptoms, biomarkers to predict the outcome and adjuvants for SLIT are expected. Saliva is the first target with which tablets used in SLIT come into contact, and antibodies in saliva such as IgG4 and IgA are increased after SLIT. The salivary microbiome is reported to have some effects on the immune system and is associated with allergic and immune diseases. According to the development of the metagenomic sequencing technique, specific microorganisms which turn out to be associated with the efficacy of SLIT can be detected, and these microorganisms may be used as adjuvants for SLIT in the future