The use of Microfiltered Water Dispensers (MWDs) is increasing in offices, companies, or commercial facilities, as a response to plastic pollution. Despite their widespread use, poor data are available about the water quality and pathogens developed. Starting from a high contamination found in MWDs, a Water Safety Plan (WSP) was implemented on 57 MWDs to improve the water quality. To assess the effectiveness of WSP during the period 2017–2021, the environmental monitoring of heterotrophic plate counts (HPCs) at 36 °C and 22 °C, Enterococcus spp., Pseudomonas aeruginosa, Escherichia coli, Staphylococcus aureus, and Clostridium perfringens, as prescribed by Italian regulation for drinking water, was conducted.

It is known that the quality of drinking water is an important public health issue, and the Microfiltered Water Dispensers (MWDs) are often adopted as devices able to improve water organoleptic characteristics and are easy to use and to maintain [1]. MWDs are devices directly connected to a municipal water supply and they often may include a CO2 system for sparkling water or cooling systems for cold water. An activated carbon filtration system incorporated in the device improves the treatment of drinking water; sometimes an Ag+ coating may be present. The activated carbon filter is used for a bacteriostatic effect and to reduce tastes and odors or remove organic and inorganic contaminants [2][3]. Furthermore, the use of activated carbon filters could amplify the microbiological contamination at point of use, especially in the presence of water stagnation [4][5]. The filtration system is sometimes associated with an UV lamp, installed inside MWDs or immediately before the water is dispensed, at the output nozzle. The UV lamp is able to remove airborne or surface microorganisms [6][7].
For these reasons, an adequate maintenance and disinfection protocol should be implemented on MWDs. Several studies have discussed the use of oxidants’ agents, such as peracetic acid and hydrogen peroxide, to reduce the microbiological contamination and to assure the quality of resulting water [5][8]. The disinfection products need to be certified as food-grade products to preserve the health of consumers; at the same time, it is recommended to avoid the continuous use of aggressive disinfectants, such as chlorine disinfectants, that could damage the devices, often characterized by plastic material causing a decay of the material, which can dissolve into the water flow and reach the consumers. Another aspect regards the continuous disinfection treatment that can lead to a bacterial species’ selection with consequent increase in bacterial resistance and inefficient disinfection procedures [9][10].
However, concerns have been raised about the quality of the water dispensed from MWDs due to the non-compliant maintenance procedures that could lead to a potential risk of uncontrolled bacterial contamination and the consequence of waterborne infectious diseases, especially as regards the sensitive and immunocompromised population [1]. Multiple studies show that the contamination of MWDs is caused by missed or improper cleaning.
Pseudomonas aeruginosa (P. aeruginosa) is considered an opportunistic pathogen, and its occurrence in drinking water can pose a serious health risk to children and immunocompromised individuals [11].
Such findings indicate that the companies and customers should be informed about the proper use and correct maintenance of MWDs, and this helps to keep them free from microbiological contamination [12].
In order to avoid or to reduce the risk of acquiring water-related infections, World Health Organization (WHO) Guidelines for Drinking-Water Quality and European Directive and subsequent amendments on the quality of water intended for human consumption have been introduced in some countries [13][14][15][16][17]. In Italy, established criteria exist for human consumption of water, including water coming from MWDs [7][18].

The MWDs involved in the study are considered “point of use”, meaning that they are connected to a main potable water network (Figure 1). 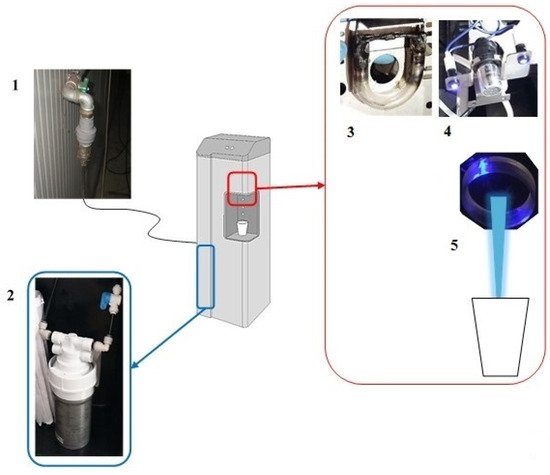 Figure 1. Schematic representation of Microfiltered Water Dispensers (MWDs) from our previous study (Girolamini et al. 2019): 1: Input from municipal water, 2: Activated carbon filter, 3: UV Lamp at water supply point, 4: UV lamp, without glass, and water supply point (output), 5: Water supply nozzle (output).
A dedicated pipeline containing a removable filter with a pore size of 1 mm was used to remove particulate matter that could be delivered from the municipal water. The main water flowed through an internal activated carbon filter with a pore size of 0.5 µm, which reduced tastes, odors, and various organic and inorganic substances (e.g., clays, chlorine, etc.), as well as potentially disinfectant chemicals used in municipal water. The MWDs showed an approximate capacity of 20–28 L/h and were provided by a single, low-pressure UV lamp at the output water supply point. The lamp consisted of a small, glass tube encircled with a power of 1.5 W. The MWDs provided water at room temperature, sparkling water (by carbon dioxide gas cylinder), and hot water, via a circular supply point (nozzle). The water was supplied by a single nozzle located at the base of the dispenser, which had a capacity of 30 cL. The technical characteristics of MWDs were provided in the manufacturer’s manuals and conformed to the Italian directives [7].
The MWDs involved in this study were installed in several industrial sites (e.g., coffee break areas, offices, recreational points, etc.) and the intended use was especially to provide drinking water in common or private spaces, not catering use, as admitted. Moreover, in Italy, it is mandatory to notify the presence and use of MWDs to the Public Health Authorities [19] only when these devices are in use in hotels, canteens, restaurants, and cafés; therefore, their presence in other facilities often is underestimated, with a lack of authority control.

Considering the contamination found in the previous study [20], in relation to HPCs at 36 °C and 22 °C, P. aeruginosa and other pathogenic bacteria, Table 1 displays the status of MWDs’ contamination at the beginning of the study (2017) and the mean contamination found during the period of the study.
Table 1. MWDs’ mean contamination ± standard deviation (cfu/mL ± SD) found at the beginning of the WSP implemented in 2017 until today (2021), with respect to mean contamination found in the previous study (Girolamini et al., 2019), from 2015 to 2017.
In detail, a total of 477 water samples were collected from 57 MWDs and analyzed for HPCs at 36 °C and 22 °C and for pathogenic bacteria, Enterococcus spp., P. aeruginosa, Escherichia Coli (E. coli), Staphilococcus aureus (S. aureus), and Clostridium perfringens (C. perfringens).
The overall results showed that the samples were more contaminated by HPCs at 36 °C and 22 °C; instead, P. aeruginosa was detected in 44/477 (9.2%) samples. Total and fecal coliforms, E. coli, S. aureus, and C. perfringens were not detected in any of the investigated samples. The MWDs’ mean contamination found, shown in Table 1, displayed a continuous decrease during the years of the study. The HPCs at 36 °C and 22 °C data were studied to understand the trend of bacteriological contamination. The analysis described below was not performed for other pathogenic parameters found, due to the sample size of data being too small for statistical reporting and for other microbiological parameters never detected in MWDs during the period.
The positive samples were analyzed with respect to the reference values prescribed by the Italian regulations.
Regarding HPCs at 36 °C and 22 °C, the following microbiological profiles were recorded: a total of 187/477 (39.2%) samples, with a range of contamination of 21–14,940 cfu/mL, and 94/477 (19.7%) samples, with a range of contamination of 104–10,960 cfu/mL, exceeded the regulation limit values of 20 cfu/mL and 100 cfu/mL, respectively, for HPCs at 36 °C and 22 °C.
The contamination found was studied also in relation to the temperature measured, considering the temperature as one of the factors that could influence the bacterial growth. According to the Guidelines for Drinking-Water Quality, the reference water temperature was between the range of 12–20 °C, with a limit not to exceed set at 25 °C [14][16][17][21]. In particular, in our study, 292/477 (61.2%) samples showed temperature values ≤ 25° C and 185/477 (38.8%) samples showed values > 25° C. The samples showed a minimum value measured of 7.2 °C and a maximum of 32.4 °C, with a median value of 24.1 °C.
Figure 2 shows how most samples were centered around the median value of 24.1 °C, a temperature value close to the reference limit threshold of 25 °C [17]. 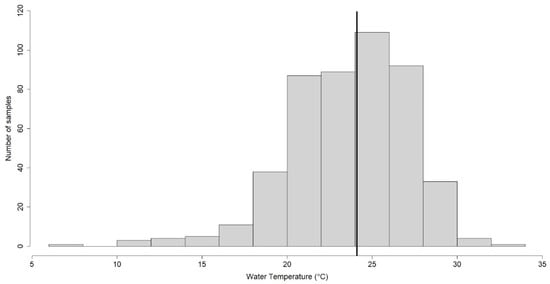 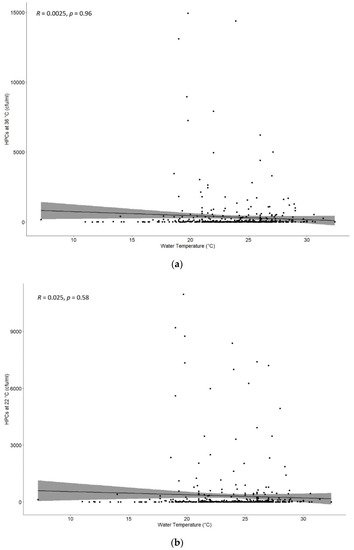 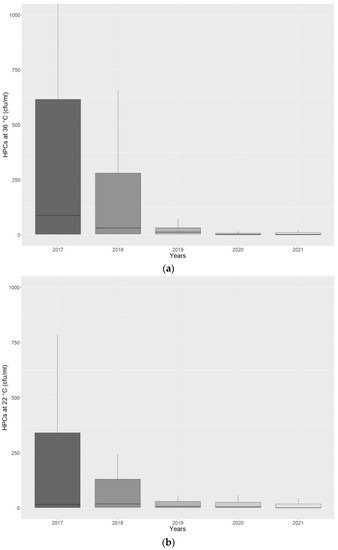 The facts prove the long-term effectiveness of the WSP followed by the company and the consumers, in addition to the role of a multidisciplinary approach established to assure the drinking water quality, according to the International and National directives. In addition, researchers suggests a need to implement more rigorous microbiological monitoring to apply to MWDs’ environment, underestimated to date, despite the large diffusion of these devices in the communities.
Lack of awareness and knowledge on these issues, in addition to missing systematical control by users as well as by public health authorities, can lead to a high risk to human health, especially in hospitals and, in general, in all health-care settings, where the use of MWDs is already widespread and the presence of immunocompromised people could increase the risk of infections.
Moreover, these findings assume a relevant importance even across new scenarios: the higher request for plastic reduction, the introduction, starting from January 2021, of the new European Directive 2184/2020 on the quality of water intended for human consumption focused to implement a WSP approach in all facilities, and the introduction of new microbiological parameters in order to assure the water quality, such as, for example, Legionella spp. [22]. Considering the habitat, the pathogenic role, and the impact on public health demonstrated for these bacteria, the sanitation and maintenance procedures of MWDs will play a relevant role to preserve the water quality.