Microbes are ubiquitous organisms, found in air, soil, water, as well as animals, and plants [1]. They play vital roles in driving global biogeochemical cycles and have an immense impact on the survival, health, and development of mankind. A number of microbes have been isolated in laboratories that possess the ability to degrade organic pollutants and reduce or transform heavy metals [2]. However, the transforming efficiency of pollutants by a single species always declines when applied to in-site complex polluted sites [3]. Complex pollutants impose stress conditions on a single species and hinder their metabolism. In contrast, microbial consortia tend to show resistance and multifunctionality as varied species work together to efficiently utilize all forms of substrates [4][5]. 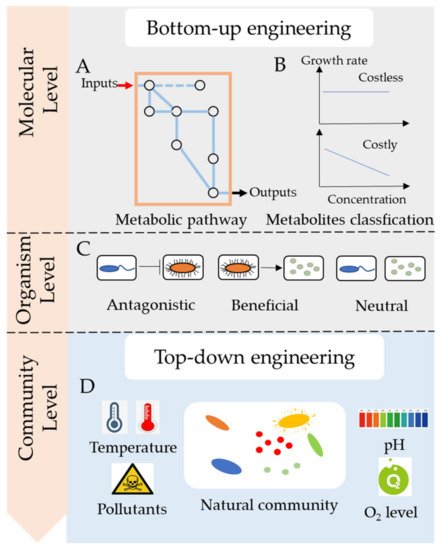 Microbial cross-feedings are common in natural environments [9] and microbes frequently exchange substances [10]. Many studies have reported that microbes significantly benefit from this exchange of metabolites [11]. In order to improve microbial consortia’s performance in bioremediation, it is essential to delineate the mechanisms of engineered microbial consortia on the molecular level by identifying metabolites and mechanisms of transfer.

Costly metabolites usually benefit the receivers but harm the producers as the increased secretion leads to reduced fitness. Creating a bidirectional exchange of costly metabolites could benefit the microbial consortia, which may help construct a stable community to improve bioremediation. In a study, an Escherichia coli mutant unable to synthesize methionine was co-cultured with Salmonella enterica ser. Typhimurium, which was able to receive metabolites from Escherichia coli [13]. After several generations, the Salmonella strain underwent mutations to excrete methionine, thereby aiding E. coli growth. That is to say, Salmonella gained fitness by receiving nutrients from enhanced E. coli growth, which helped Salmonella to overcome the fitness cost of high methionine excretion. Therefore, the bidirectional exchange of costly metabolites contributes to a reciprocal nutrient exchange that is beneficial for the whole community. However, there was little research on determining whether the metabolites of pollutants were costly or not. It causes risks of disrupting the functional microbial consortia when unknown species are added.

Microbes commonly secrete waste products with no fitness cost to the producer, that is, secretion does not alter the growth rate of the producer. It was proposed that costless metabolites can be a prominent driver of microbial interactions and influence the functions of microbial consortia [6]. The exchange of costless metabolites could offset competition for nutrients and yield stable specific partnerships, such as pollutants-degraders, which might help improve the bioremediation of pollutants. However, the cost of metabolite secretion and metabolic interactions of an organism may change in different environments [15] and are difficult to determine by experimental procedures. Using genome-scale models of metabolism, Pacheco et al. identified a large spectrum of costless metabolites [6].

3. How to Engineer Microbial Consortia towards Bioremediation

Bottom-up engineering is based on the metabolism and interactions between species. In the past, it was a challenge to predict and precisely manage microbial consortia; however, with the development of multi-omics and automation technology, many researchers have found ways to manipulate metabolic networks and microbial interactions [16][17][18].

Metabolism determines the nutrients that a species consumes and the metabolites that are excreted into the environment. There are several pathway models for the molecular mechanisms, such as glycolysis, the Kreb’s cycle, and glutaminolysis. Constraint-based methods, such as flux balance analysis, were also used for bottom-up engineering. Based on metabolic fluxes and interacting networks, it is possible to predict the desired output. Generally, the genome sequences of the strains in microbial consortia are needed to reconstruct the metabolic pathways and quantitative models are used to investigate the dynamics of the consortia [18]. Designing microbial consortia with defined social interactions is also an important part of bottom-up engineering. Microbial social interactions, such as competition and cooperation, are common in microbial communities and are essential in specifying ecosystem dynamics [19]. A model based on social-interaction programming can successfully predict the behaviors and dynamics of a community comprising of up to four species [20].

The core function of synthetic microbial consortia in the bioremediation of pollutants is the degradation of hazardous substances. Therefore, degraders are indispensable in a synthetic microbial consortium. However, there are still other important partner species with varied functions in the consortia that could contribute to the improvement of bioremediation ( Figure 2 ). When dealing with low water-soluble organic pollutants, the surfactant-producing function of microbial consortia needed to be considered. When the nutrient of polluted sites was poor, adding nitrogen fixers and carbon producers was important to provided degraders with enough nutrients for bioremediation. For instance, a Bacillus strain, part of a pyrene-degrading consortium, is unable to degrade pyrene, but can enhance the bioavailability of pyrene by producing biosurfactant [21]. A polycyclic aromatic hydrocarbons (PAHs)-degrading microbial consortium consisting of Pseudomonas and Actinobacteria strains also show emulsifying activities in the presence of PAHs, which notably helps the solubilization of PAHs during biodegradation [22]. 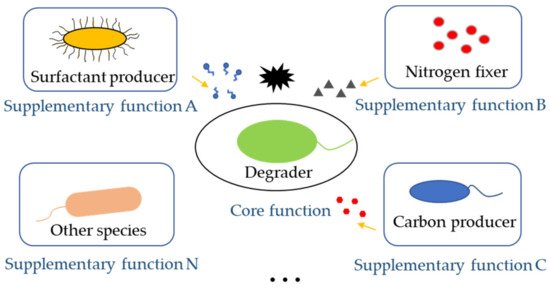 Recent empirical studies have shown that bacteria significantly benefit from trading metabolites with others, and cross-feeding within microbial consortia augment their ability to survive in complex polluted environments [27]. In a synthetic microbial consortium, Escherichia coli ATCC 33456 and Pseudomonas putida DMP-1 contribute to the simultaneous degradation of phenol and reduction of Cr(VI) [32]. Polti et al. also constructed a microbial consortium including Streptomyces sp. M7, MC1, A5, and Amycolatopsis tucumanensis AB0, and the synergistic removal efficiency of Cr(VI) and lindane was up to 69.5% and 54.7%, respectively [25]. Microbial consortia are robust and resist stress by complex contaminants. Recently, interest in synthetic microbial consortia that can perform complex functions, unlike a single community, is gaining momentum.