Human tyrosinase-related protein 1 (Tyrp1) is a transmembrane, metal-containing glycoenzyme that catalyzes the oxidation of 5,6-dihydroxyindole-2-carboxylic acid (DHICA) to 5,6-quinone-2-carboxylic acid (IQCA). It is one of three tyrosinase-like enzymes in human melanocytes that are involved in the biosynthesis of melanin, a pigment found in hair, skin, and the iris of the eye. Mutations in the Tyrp1 gene (TYRP1) can lead to oculocutaneous albinism type 3 (OCA3), an autosomal recessive disease. Those with OCA3 typically present with one of two phenotypes: rufous OCA (ROCA) or brown OCA (BOCA). ROCA is characterized by red-bronze skin color, blue or brown irises, and ginger-red hair, while BOCA is characterized by light to brown hair and light to brown or tan skin color.
Four conserved regions exist among all three tyrosinase-like enzymes: an N-terminal signal peptide, an intra-melanosomal domain, one transmembrane α-helix, and a small C-terminal cytoplasmic domain. Within the intra-melanosomal domain, there exist both a Cys-rich subdomain and a tyrosinase-like subdomain containing a binuclear metal-ion binding motif. The crystal structure of the intra-melanosomal fragment of Tyrp1, which includes both subdomains (residues 25–470) was determined at 2.35 Å [1]. In total, Tyrp1 contains 537 residues comprising the signal peptide (1–24), the intra-melanosomal domain (Cys-rich subdomain 25–126, tyrosinase-like subdomain 127–477), the transmembrane α-helix (478–501), and the cytoplasmic domain (502–537).
The core of the Cys-rich subdomain of Tyrp1 resembles the epidermal growth factor (EGF)-like domain due to its patterned disulfide bridges and short antiparallel ß-strands [1][2]. It contains five total disulfide bridges, three of them located within the EGF-like fold. Most albinism-related mutations of Tyrp1 affect its stability or activity, and expansion of the interface between the EGF-like domain and the tyrosinase-like domain was linked to OCA Type 1B mutations in tyrosinase [1][3]. One such mutation, C30R, breaks the C30-C41 disulfide bridge and results in OCA3 [4]. Tyrp1 was found to have a binuclear zinc active site rather than the typical binuclear copper active site found in tyrosinases (Figure 1). 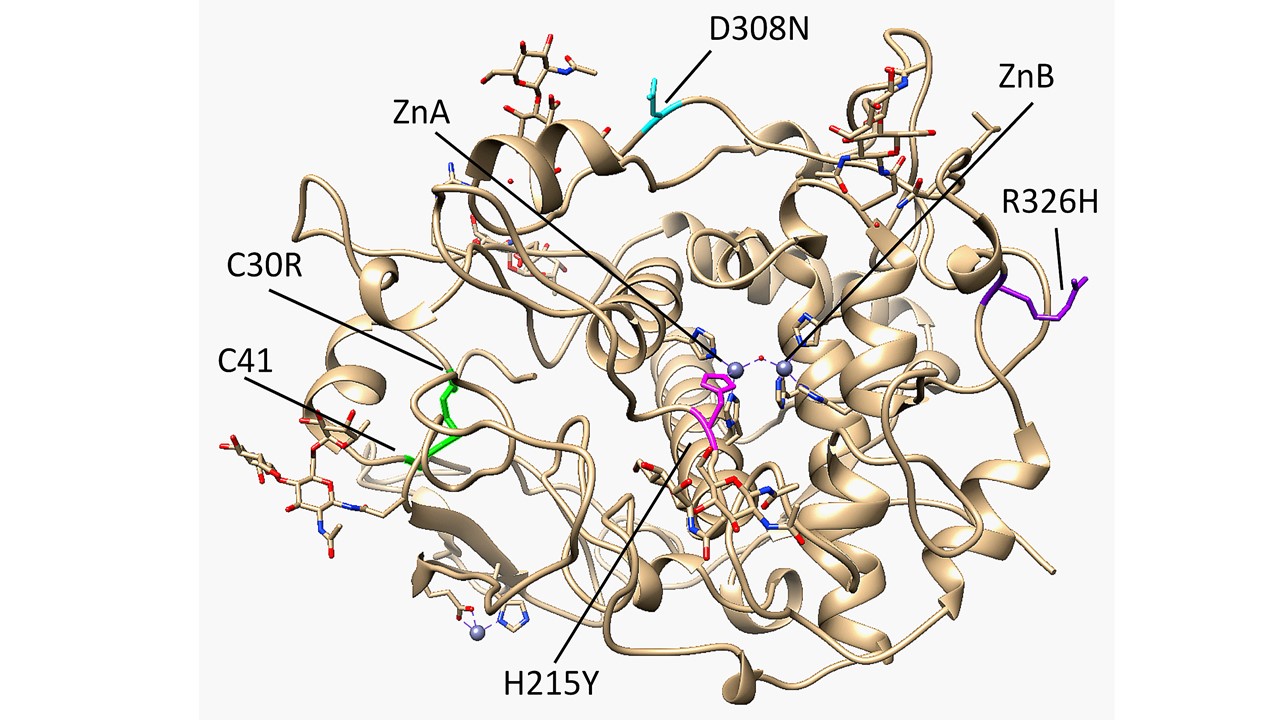 A four-helix bundle within the tyrosinase-like subdomain contains six total histidine residues that coordinate the Zn metal ions, which are bridged by a single water molecule. ZnA is coordinated by H192, H215, and H224, while ZnB is coordinated by H377, H381, and H404. In tyrosinase, histidine is essential for catalytic activity, and in both tyrosinase and Tyrp1, mutations to metal-coordinating histidine residues can result in reduced activity and consequently different forms of albinism [5][6]. Mutations to H215, H224, and H381 were specifically identified to have OCA3 [7][8]. Tyrp1 is an N-linked glycoprotein that contains sugars at six N sites (96, 104, 181, 304, 350, 385). Glycosylation has been shown to help ensure proper folding and stabilize tyrosinase-like structures during the process of translocation from the endoplasmic reticulum (ER) to the cytoplasm of the melanocyte [6][9][10].
The unfolding mutation screen (UMS) was developed to understand and evaluate the effect of missense mutations on protein folding and thermodynamic stability [11][12]. This program uses protein unfolding curves and thermodynamic changes in Gibbs free energy (ΔΔG), determined by FoldX to calculate propensities of mutations in global mutagenesis [13]. Initially, UMS [11] was tested with 16 crystal structures to evaluate the unfolding of 1391 mutations from the ProTherm database. UMS showed that the computational accuracy of the unfolding calculations was similar to the accuracy of previously published free energy changes, but provided a better scale. The results are then projected onto a protein model to highlight the critical residues and regions of structural importance to the protein [14].
While mutations leading to OCA3 have been discovered, the molecular mechanisms leading to these results have yet to be elucidated. Here, for the first time, we used computational methods to identify mechanisms behind mutation instability and differences behind protein-ligand interactions in Tyrp1 and OCA3-causing mutations. Understanding the differences in protein-ligand interactions among Tyrp1 and its associated mutations can establish mechanisms by which they change Tyrp1 catalytic activity. Coupled with in vitro and in vivo studies, in silico studies of similar nature can help lead to novel therapies for OCA3 patients.

For the first time, the mutant variants of Tyrp1, C30R, H215Y, D308N, and R326H were analyzed computationally. We have demonstrated that the protein stability changes caused by the disease-causing mutation could be predicted using the unfolding mutation screen. For three mutant variants, the predicted changes are associated with OCA3 clinical data on genetic disease severity. We demonstrated that both the C30R and H215Y mutants result in a complete loss of protein stability as they affect structurally integral regions of Tyrp1, which is consistent with in vitro experiments. Both D308N and R326H conserve the structure of these regions but may allosterically affect the conformation of the active site, increasing the size of the bottleneck. This effect is highlighted in protein-ligand interactions. While the noncovalent interactions largely remain similar between Tyrp1 and D308N, their strength decreases due to distance. R326H, however, is shown to have an even greater effect on the bottleneck, resulting in both fewer and weaker interactions with DHICA. Identifying the bottleneck residues of active sites can help identify their most stable conformations and elucidate protein-ligand interactions integral to catalytic activity. These studies, coupled with in vitro and in vivo experiments, can advance our understanding of the mechanisms behind mutations of Tyrp1 and lead to novel therapies for patients with OCA3.