In the last decades, a myriad of materials has been synthesized and utilized for the development of sample preparation procedures. The use of their magnetic analogues has gained significant attention and many procedures have been developed using magnetic materials. In this context, the benefits of a new class of magnetic ionic liquids (MILs), as non-conventional solvents, have been reaped in sample preparation procedures. MILs combine the advantageous properties of ionic liquids along with the magnetic properties, creating an unsurpassed combination. Owing to their unique nature and inherent benefits, the number of published reports on sample preparation with MILs is increasing. This fact, along with the many different types of extraction procedures that are developed, suggests that this is a promising field of research. Advances in the field are achieved both by developing new MILs with better properties (showing either stronger response to external magnetic fields or tunable extractive properties) and by developing and/or combining methods, resulting in advanced ones.

The advancements in the production of new materials in liquid and solid form have significantly impacted the field of sample preparation in analytical chemistry [1]. In the past few years, a wide variety of them with exceptional properties have been utilized in the preconcentration and separation of analytes from different matrices [2][3]. The ionic liquids (ILs) are salts composed of organic cations and organic or inorganic anions [4]. They have melting points at or below 100 °C and hence, they exist as liquids in a wide temperature range. They have low melting points, negligible vapor pressures, outstanding chemical and thermal stabilities, and good affinities for both organic and inorganic analytes [4][5]. In addition, their viscosity, miscibility with organic or inorganic phases, and selectivity for several applications may be tuned based on the needs. Because of these unique physicochemical properties, they have emerged as an excellent class of alternative extraction media. Despite these advantages, poor phase separation, particularly in solvent-based extractions, remains a major challenge in analytical sample preparation [4][5][6][7].
Magnetic materials possess a prominent position in this research field as they have attracted considerable attention [3]. Recent developments have indicated that the synthesis of the single component magnetic ILs (MILs) where magnetic metals are not incorporated externally but as a part of the IL can lead to better phase separations by way of an external magnet [8]. MILs are liquids that combine the unique properties of ionic liquids with magnetism, thus facilitating their easy retrieval during the extraction process. MILs are easy to disperse in solutions and can magnetically be separated from the other phases, negating the need for centrifugation, commonly employed in classical extraction procedures, thus, reducing the time and energy required for it. The careful tailoring of their components allows their successful application in the extraction of both hydrophilic and hydrophobic analytes from several media [3][4][8].
Much effort has been put into developing MILs based on transition metals that are less subjected to hydrolysis and possess improved magnetic properties. Therefore, MILs containing transition elements such as manganese, cobalt, gadolinium, and dysprosium have also been reported while metal-free MILs with a paramagnetic component based on organic radicals have also been synthesized [8][9][10][11][12][13].
So far, the use of MILs in sample preparation has greatly advanced, and many reports are being published with innovative concepts. Since this topic or research has great potential, our aim is to provide a literature update on the current trends of MILs in sample preparation under different conditions of operation, along with the current limitations and the prospects of the field.

Dispersive liquid–liquid phase microextraction (DLLME) is one of the most popular solvent-based microextraction techniques. MILs have been investigated in DLLME-based approaches. Because of their favorable physicochemical properties, they can be an environmentally benign alternative to toxic organic solvents that are commonly employed. Furthermore, MILs can increase the sample throughput as they are easily harvested with the aid of a simple magnet, thereby eliminating the need for a centrifugation step.

A MIL can be used as an extraction phase for DLMME. In the study of Silva et al., such a sample preparation procedure was developed and combined with high-performance liquid chromatography with diode array detection (HPLC-DAD) for the determination of organic contaminants in river water samples [14]. The organic contaminants included pharmaceuticals (estriol, estrone, carbamazepine, diazepam, ketoprofen, ibuprofen, 17 α-ethynyl estradiol), plastic, and personal care additives (bisphenol A, triclocarban, methylparaben, ethylparaben), and pesticides (aldicarb, methyl parathion, metolachlor, and diuron). In comparison with other studies, this method does not require a centrifugation step and uses smaller volumes of solution and short time sample preparation. Although this method was published lately (compared with other procedures discussed later on), its design is rather simple.

The in-situ DLLME approach is an adjustment of the classical DLLME method that uses ILs as extraction solvents [15]. A limited number of reports have exploited this alternative formation of MILs in micro-extraction approaches, which until now include the determination of harmful analytes in water and food samples, and most recently the extraction of DNA [16]. In these cases, the magnetism of MILs enables magnetic isolation of the extraction solvent with a strong magnet, thus replacing the centrifugation and filtration steps [15]. For this application, mixing of a hydrophilic IL with a metathesis reagent is required, leading to an anion exchange and generation of a hydrophobic IL. Through this reaction, multiple hydrophobic IL micro-droplets are formed that are able to interact with the analytes [17]. Most of the time, the MILs designed contain paramagnetic anions. However, some restrictions in their use in DLLME have been observed, such as hydrolysis in water at room temperature and incompatibility with HPLC [15].

Single-drop microextraction is a straightforward, environmentally friendly technique that has been used, mainly, for the extraction and subsequent determination of low-molecular-weight compounds after coupling to various chromatographic techniques. The extraction is performed using a few microliters of an organic solvent either immersed into an aqueous sample or exposed to the headspace of the matrix with the aid of a micro syringe. MILs can provide a viable alternative to organic solvents in this technique because of their low volatility and high viscosity/hydrophobicity, overcoming the problem of droplet instability.

For the most part, solvent-based extraction methods are the leading for the extraction of analytes from fatty solid samples. However, lately, matrix solid-phase dispersion (MSPD) has become an upward trend, mainly due to the low consumption of organic solvents. Likewise, DLLME, has attracted much attention considering its relatively high extraction efficiency. In a more recent work, MIL [P6,6,6,1,4+][Co(II)(hfacac)3−] was directly used for the first time in a matrix solid-phase extraction procedure [18]. Developed by Chatzimitakos and co-workers, this method provided a valuable approach for the determination of multi-class pesticides residues in raw vegetables. Taking advantage of its magnetic properties, MIL was readily harvested after the extraction step by simply using a magnet. In addition, its hydrophobic and viscous nature made separation and retrieval feasible and assisted in mixing with the matrix. Described in more detail, chopped vegetables were pulverized and one drop of MIL was added to the sample, forming tiny droplets. Then, a saturated sodium chloride solution was added resulting in coalescing and creation of larger droplets which were separated more easily from the bulk phase. The homogenized mixture was ultrasonicated. Due to the dark red color of the chosen MIL, discrimination and harvesting from the solution were easily done. Droplets coupled with target analytes were transferred via magnet to 1 mL of acetonitrile in order to be dissolved (Figure 1). After the evaporation with a gentle nitrogen stream, the sample was ready to be injected into the HPLC-DAD system for further separation and detection of pesticides. In order to find the most efficient conditions, authors examined the effect of vegetable matrix and dispersion material as well as the selection of the most suitable MIL. For this purpose, MIL that differs in the metal and the number of anionic ligands were tested with the results showing that neither plays a decisive role in the extraction, on the contrary, the extraction is based, mainly, on the cation. Continuing in this line, the selection was based on the visual discrimination from the rest of the system, with dark red [P6,6,6,1,4+][Co(II)(hfacac)3−] preferred. As regards the vegetable matrix, low recoveries occurred with matrices of low water content. The best combination was found to be vegetables with “soft” texture and a high water-content matrix (e.g., potatoes). Lastly, silica, quartz silica, sodium chloride, and sodium sulfate were tried as dispersion materials in the developed method. Based on the results, solid dispersing materials, as well as the addition of both salts were found to be ineffective. However, when only one salt was added, the reproducibility of the procedure was improved (without the salt solution, RSD of five measurements was 9.5% and with the salt solution was 6.0%). Such direct procedures are highly welcome, since they can be carried out by analysts with less expertise and they have reduced cost, compared with other procedures. 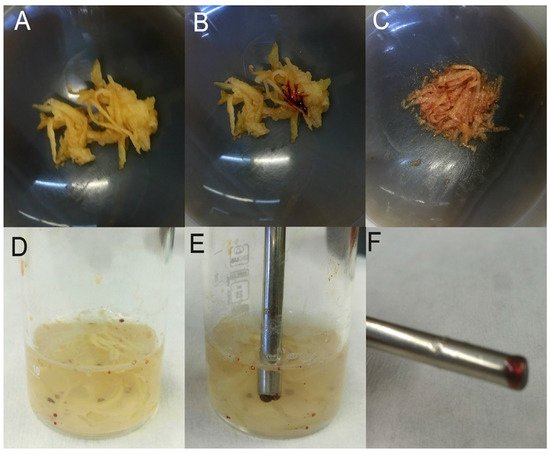 Figure 1. Representative pictures of the various steps of the developed procedure: (A) chopped potato in a mortar, (B) chopped potato with a drop of MIL before mixing, (C) chopped potato and MIL after mixing, (D) mixture of potato and MIL in saturated sodium chloride solution after ultrasonication, (E) harvesting the MIL droplets with a magnetic rod and (F) the collected MIL droplets on the magnetic rod. Reproduced with permission from [55]. Copyright Elsevier, 2018.
2.5. Stir-Bar Dispersive Procedures
A novel hybrid microextraction method called stir bar dispersive liquid microextraction (SBDLME) opens new insights into the microextraction field, due to the facile retrieval of the target analytes [19]. This approach combines the advantages of stir bar sorptive extraction and DLLME. The first report of this approach was by Peng et al., 2012. His team developed a SBDLME method for the determination of three fungicide residues in real water samples (tap water, rainwater, and lake water), utilizing the MILs 1-butyl-3-methylimidazolium hexafluorophosphate ([C4mim][PF6]), and 1-hexyl-3-methylimidazolium hexafluorophosphate ([C6mim][PF6]) as extractant. Τhe ionic liquid and magnetic stir bar were held within a sealed PCR tube pierced with many micro-holes on the wall. The ionic liquid magnetic bar was then placed in the aqueous solution for extraction. Meanwhile, the magnetic stirrer was switched on and the ionic liquid magnetic bar dispersed freely in the sample. When the magnetic stirrer was switched off the MIL was retrieved on the rod magnet. The obtained ionic liquid extract was too viscous to be injected directly into the HPLC system, thus it was firstly diluted with acetonitrile. LODs were varying from 1.4 to 3.4 μg·L−1, RSD values ranged from 2.9 to 6.0%, and recoveries of carbamate pesticides at spiking levels of 5 and 50 μg·L−1 were in the range of 85-98.0%, 80-98% respectively, leading to a simple, practical and efficient method for the determination of trace level of carbamates in environmental samples.