Extreme Microorganisms in the Context of Biogeochemical Nitrogen Cycle

Extreme microorganisms (extremophile) are organisms that inhabit environments characterized by inhospitable parameters for most live beings (extreme temperatures and pH values, high or low ionic strength, pressure, or scarcity of nutrients). To grow optimally under these conditions, extremophiles have evolved molecular adaptations affecting their physiology, metabolism, cell signaling, etc. Due to their peculiarities in terms of physiology and metabolism, they have become good models for (i) understanding the limits of life on Earth, (ii) exploring the possible existence of extraterrestrial life (Astrobiology), or (iii) to look for potential applications in biotechnology. Recent research has revealed that extremophilic microbes play key roles in all biogeochemical cycles on Earth. Nitrogen cycle (N-cycle) is one of the most important biogeochemical cycles in nature; thanks to it, nitrogen is converted into multiple chemical forms, which circulate among atmospheric, terrestrial and aquatic ecosystems. This review summarizes recent knowledge on the role of extreme microorganisms in the N-cycle in extremophilic ecosystems, with special emphasis on members of the Archaea domain. Potential implications of these microbes in global warming and nitrogen balance, as well as their biotechnological applications are also discussed.

1. General Overview of the Role of Microorganisms in N-Cycle

The N-cycle is one of the most important biogeochemical cycles of the Earth, with large natural flows of nitrogen from the atmosphere into terrestrial and marine ecosystems through several biological processes [78,79]. It involves pathways such as nitrogen fixation, nitrification, nitrate/ammonium assimilation, dissimilatory nitrate reduction to ammonia (DNRA), anaerobic ammonia oxidation (ANAMMOX), complete ammonia oxidation (COMAMMOX), and denitrification (Figure 1). In brief, NO3− and NH4+ can be used as nitrogen sources for growth under aerobic conditions (assimilatory nitrate reduction/ammonium assimilation). NO3− can also be the final electron acceptor for respiration under anoxia (denitrification) or an electron acceptor in a redox process aiming at the removal of excess of reductant power through dissimilatory nitrate reduction. 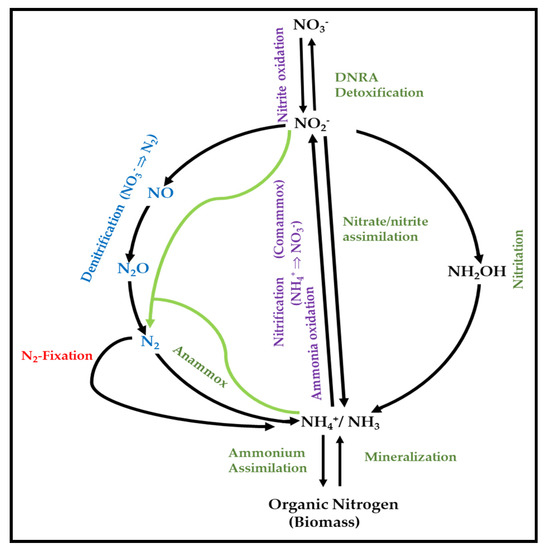 Figure 1. Major processes of the N-cycle (adapted from Martínez-Espinosa, 2019) [99].
Dissimilatory NO3− reduction, NO3− respiration, or denitrification are often used equivalently in the literature, and the intermediate products are NO2−, NO, and N2O [78,79]. However, the dissimilatory pathway refers to non-assimilatory reactions that are not directly coupled to the generation of proton motive force. Dissimilatory nitrate reduction to ammonium (DNRA) is also possible under anaerobic or microaerobic conditions. On the other hand, NO2− could be reduced to NH4+, which is then excreted, thanks to the process called NO3−/NO2− ammonification. Some organisms can oxidize either NH4+ or NO2− by using a pathway called nitrification, while other organisms, such as some planctomycetes, oxidize NH4+ and utilize NO2− as a respiratory electron acceptor in a pathway named ANAMMOX [80,81,82]. Recently, the discovery of new members of the Nitrospira genus, able to catalyze both nitrification steps (ammonia oxidation and nitrite oxidation), has allowed the proposal of ‘COMAMMOX’ organisms, also called “complete ammonia oxidizers” [83,84,85].
Finally, (di)nitrogen fixation allows several microorganisms to reduce N2 to NH4+ to supply nitrogen to plants. Plants are not able to fix their own nitrogen, but a few of them (mainly legumes) fix nitrogen via symbiotic anaerobic microorganisms (mainly rhizobia). Thus, nitrogen fixation, along with photosynthesis is the basis of all life on Earth [86,87,88]. Free-living diazotrophic microorganisms also play an important role in carrying out nitrogen fixation in ecosystems such as oceans [89] (which cannot be considered extremophilic environments) and extreme environments such as glacier fore field environments [90], desert-like ecosystems [91], or hot springs [92]. Thanks to these microbes, nitrogen fixation is revealed as a crucial pathway for building labile nitrogen stocks and facilitating higher plant colonization in oligotrophic glacier fore field soils [90,93] or hot springs [92,94,95,96]. Chemolithotrophic nitrogen fixation at high temperatures (up to 92 °C) has attracted scientists researching the early evolution of life and the nitrogen cycle, and deep-sea hyperthermophilic methanogens and their nitrogen fixation processes have been extensively examined [96,97,98].
Most of the mentioned pathways are thriven by prokaryotes, although nitrogen fixation also involves plants and their associated rhizobia and nitrate/ammonium assimilation can be observed in both prokaryotes and eukaryotes.

2. Metabolic Pathways of N-Cycle Carried out by Extremophiles

Regarding extremophilic microbes, recent research has revealed that not only bacteria but also archaea may contribute to several pathways of the N-cycle in extreme environments. The results already reported are scarce compared to non-extreme ecosystems. However, the current evidences from molecular ecology, genomics, metagenomics, biochemical, and physiological studies mainly offer details about their potential role in the following N-cycle pathways: (i) aerobic or (ii) anaerobic ammonium oxidation, (iii) anaerobic denitrification, and (iv) nitrate/ammonium assimilation. The main findings related to these pathways are summarized following:
(i) Aerobic ammonium oxidation is the process of converting ammonium to nitrate and thus links the regeneration of organic nitrogen to fixed nitrogen loss by denitrification. Ammonium oxidation is critical to global nitrogen cycling and is often thought to be driven only by ammonia-oxidizing bacteria phylogenetically included in the group of Proteobacteria (ammonia-oxidizing bacteria, AOB), that are autotrophic and obligatory aerobic [100,101]. At the beginning of this century, the finding of new ammonia-oxidizing organisms belonging to the archaeal domain challenges this perception. Recent studies have stated that ammonia-oxidizing archaea (AOA) can be both abundant and diverse in aquatic and terrestrial ecosystems studies, and at least some AOA have a high substrate affinity for ammonia being able to grow under extremely oligotrophic conditions [102,103]. However, the global characterization of this pathway in extremophilic environments is still scarce, and most of the results reported come from studies done with members of Crenarchaea and Thaumarchaea (archaea domain). Some of these works have been conducted in natural environments, such as soils or the deep-subsurface of hydrothermal aquifers, in which thermophilic archaea belonging to Thaumarchaeota sustain this process [104]. Regarding halophilic environments, aerobic ammonium oxidation has been reported from oceanic ecosystems, such as coastal marine wetlands, anoxic oceanic depth zones, or coral reefs [105,106,107]. Consequently, two major microbial groups are now believed to be involved in ammonia oxidation: chemolithotrophic ammonia-oxidizing bacteria (AOB) and ammonia-oxidizing archaea (AOA) [103,108].
(ii) Anaerobic ammonium oxidation (ANAMMOX) is the process of oxidizing ammonium through the reduction of nitrite. This pathway was first described in a denitrifying pilot plant reactor [109], and the enzymes involved in this process have been described in detail for several Anammox bacteria [80,110]. Wastewater has been a good source for the isolation of new species showing ANAMMOX capacity. However, microbes carrying out ANAMMOX processes have also been isolated from natural environments, and many of them are mesophilic bacteria. Extremophilic microbes able to carry out the ANAMMOX process have been recently described, too, not only in pilot plants, brines, or sludges but also in natural ecosystems, such as some freshwater extreme environments, hot springs, and deep-sea hydrothermal vents [111,112,113]. ANAMMOX within the domain archaea has been recognized as a critically important process in the environment, and particularly in the ocean, but from an accurate point of view based on definitions, oceans cannot be considered extreme environments [114]. Thus, the degree of characterization of this pathway in extremophiles is relatively low compared to the knowledge on ANAMMOX in mesophilic bacteria and, consequently, more research is needed on this topic in the future.
(iii) Anaerobic denitrification is an anaerobic respiratory pathway in which nitrate is reduced to dinitrogen. Some denitrifiers are complete, i.e., nitrate is fully reduced to dinitrogen thanks to four key enzymes: respiratory nitrate reductase (Nar), respiratory nitrite reductase (Nir), nitric oxide reductase (Nor), and nitrous oxide reductase (Nos). However, the process is often incomplete (partial denitrification), leading to the release of the gaseous intermediates NO and N2O, which affect the environment [39,115]. Denitrification has been extensively described so far, but regarding extremophilic microorganisms, most of the studies have been reported from both thermophilic bacteria and archaea and halophilic archaea. In the case of thermophilic bacteria, denitrification has been studied in detail in a few species of the genera Thermus [116,117,118]. Related to extreme archaea, denitrification has been described in several species of halophilic archaea [39,119,120,121] as well as in the thermophilic archaeon Pyrobaculum aerophilum [122,123,124]. A few examples of anaerobic denitrification have also been reported from moderately halophilic bacteria [125,126,127]. The enzymes catalyzing anaerobic denitrification in extremophilic archaea and bacteria have been characterized from a biochemical point of view (mainly respiratory nitrate and nitrite reductases) and share some structural features [39,128,129]. However, more effort must be made in the future to elucidate the mechanisms regulating denitrification in other extremophiles, such as halophiles (bacteria or archaea).
(iv) Finally, nitrate and ammonium assimilation have been very well characterized in symbiotic microbes, mesophilic bacteria, algae, plants, and fungi. However, the knowledge about these processes in extreme environments is still scarce and mainly limited to a few members of the Haloferacaceae family (halophilic archaea) or a few thermophiles (bacteria). In the case of haloarchaea, nitrate assimilation involves two enzymes: assimilatory nitrate reductases (Nas) and assimilatory nitrite reductases (Nir). [130,131,132,133]. The ammonium produced from nitrate/nitrite reduction or ammonium directly taken up from the environment can be assimilated through the glutamine synthetase/glutamate synthase cycle (GS/GOGAT) (when the intracellular concentration of ammonium is relatively low) [134,135] or thanks to glutamate dehydrogenase (GDH) (if the cytoplasmic ammonium concentration is significantly high) [136]. Thus, nitrate/ammonium assimilation in halophilic archaea is similar to the processes described from cyanobacteria and bacteria. Regarding thermophiles, most of the studies reported at the time of writing this review are focused on ammonium assimilation. This process has been partially characterized from a biochemical point of view in thermophilic bacteria, such as Thermus thermophilus, in which GDH activity was reported two decades ago [137,138] or Bacillus caldolyticus, from which two GSs have been isolated and characterized [139]. GSs enzymatic activity, or ammonium assimilation capacity in general, has also been predicted on the base of genomic analysis from the thermophilic bacterium, Thermotoga maritima [140], or from the acidic and chemolithoautrophic bacterium Leptospirillum ferriphilum ML-04 [141].