Kynurenic Acid in the Brain

Kynurenic acid, a metabolite of the kynurenine pathway of tryptophan catabolism, acts as antagonist for both the α7 nicotinic acetylcholine receptor and glycine co-agonist sites of the N-methyl-D-aspartic acid receptor at endogenous brain concentrations. Elevation of brain kynurenic acid levels reduces the release of neurotransmitters such as dopamine and glutamate, and kynurenic acid is considered to be involved in psychiatric disorders such as schizophrenia and depression.

In 1989, Kessler et al. found that KYNA competitively inhibited glycine coagonist site of the NMDA receptor at low concentration with an IC50 of 8 μmol/L[1]. A decade later, Hilmas et al. found that KYNA noncompetitively inhibited α7nAchRs with an IC50 of 7 μmol/L using the patch-clamp technique with cultured hippocampal neurons[2]. Furthermore, Wang et al. found that KYNA is ligand for GPR35, whose EC50s are 10.7, 7.4, and 39.2 μmol/L in mouse, rat, and human, respectively[3]. Since physiological concentrations of brain KYNA are 5 pmol/g wet wt, 15 pmol/g wet wt, and 150 pmol/g wet wt in mouse, rat and human, respectively[4] [8], elevation of brain KYNA has been considered to affect these receptors. Effects of KYNA increase on the neurotransmitter release were investigated using microdialysis technique, and KYNA concentration-dependently and reversibly reduced extracellular glutamate, dopamine, and γ-aminobutyric acid (GABA) to less than 50% of baseline concentrations[5][6][7]. Conversely, inhibition of endogenous KYNA formation by reverse dialysis of KYNA synthesis inhibitor (S)-4-(ethylsulfonyl) benzoylalanine (S-ESBA) reversibly increases dopamine, glutamate, and GABA levels in the rodent brain[7][8][9]. Although these findings suggest that changes of brain KYNA levels affect neurotransmitter release via modulation of above receptors, understanding the mechanism of action of KYNA is difficult. There is disagreement about the interaction between KYNA and α7nAchRs, because several studies failed to reproduce evidence for action of KYNA on nicotinic receptors.[10]. Schematic representation of the interaction between KYNA and the receptors is shown in Figure 1. 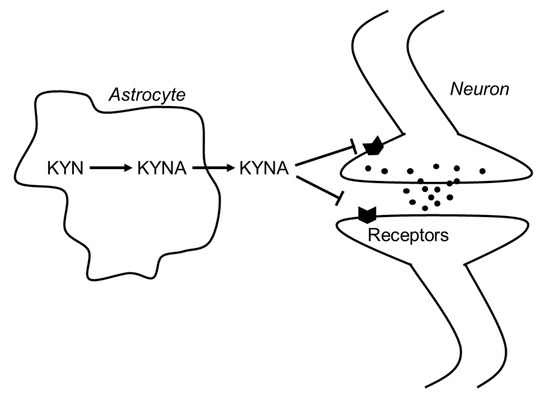 Figure 1. Schematic representation of the interaction between KYNA and neurotransmitters in the brain. Abbreviations: KYN: kynurenine; KYNA: kynurenic acid.

2. Function of Kynurenic Acid in the Brain

In humans, elevated KYNA levels are observed in the cerebrospinal fluid and cortex of patients with schizophrenia and bipolar disorder[18][19][20][21][22][23]. In the brain, kynurenine and KYNA levels in schizophrenic cases are 1.5 times higher than matched control subjects[20]. Similar observations reported that kynurenine and KYNA concentrations in the cerebrospinal fluid (CSF) were 2 and 1.5 times higher in patients with schizophrenia, respectively, than with healthy volunteers, whereas tryptophan concentrations did not differ between the groups[22]. Patients with bipolar disorder have 1.5 times increased levels of KYNA in their CSF compared with healthy volunteers, and the levels of KYNA are positively correlated with age among bipolar patients but not in healthy volunteers[24]. Haplotype analysis shows an association between kynurenine 3-monoxygenase (KMO) gene polymorphisms and CSF concentrations of KYNA in patients with schizophrenia[25]. In the bipolar disorder and schizophrenia patients, KMO mRNA levels are reduced in the brain compared with nonpsychotic patients and controls, and the KMO Arg452 allele is associated with increased levels of CSF KYNA and reduced brain KMO expression[26]. KMO is the primary enzyme responsible for kynurenine degradation. These results support the hypothesis that KYNA is involved in the pathophysiology of psychiatric diseases such as schizophrenia and bipolar disorder.