Advances of Microneedles in Biomedical Applications

A microneedle (MN) is a painless and minimally invasive drug delivery device initially developed in 1976. As microneedle technology evolves, microneedles with different shapes (cone and pyramid) and forms (solid, drug-coated, hollow, dissolvable and hydrogel-based microneedles) have been developed.

Pain associated with conventional injection for drug administration causes poor adherence. Oral administration is convenient, but the efficiency of drug delivery is limited by the first-pass effect. A microneedle is a novel approach to drug delivery that overcomes these limitations. Microneedles can physically penetrate the stratum corneum and create micropores larger than macromolecular drugs, thus providing direct channels for drug diffusion. Alternatively, drugs can be loaded in hollow microneedles and directly injected into the circulatory system. Drugs can also be mixed with a soluble substance that penetrates the skin and reaches the circulatory system. Microneedles can be used for transdermal and non-transdermal drug delivery. In transdermal drug delivery, microneedles can reduce or eliminate the pain of injection. The length of microneedles ranges from 25 to 2000 μm [1] and can penetrate the skin barrier without damaging neural tissue (Figure 1) [2]. Furthermore, microneedles is a kind of continuous administration, so that it can reduce the frequency of administration, especially for insulin injection in patients with diabetes [3][4]. Non-transdermal administration is used for buccal mucosa [5] and surgery-exposed tissues such as eyeballs [6], vascular tissue [7] and the gastrointestinal tract [8]. For example, in 2011, Patel et al. injected particles into the suprachoroidal space through hollow microneedles and delivered a drug to the back of the eye [9]. 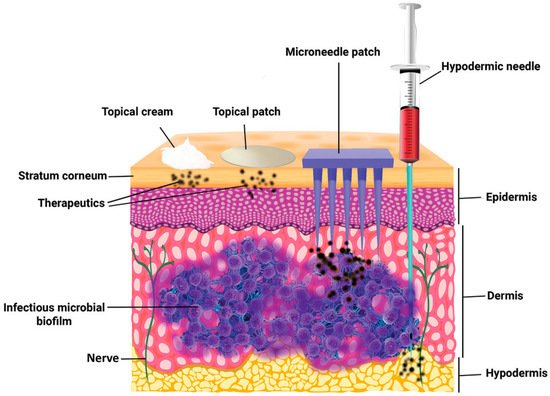 Figure 1. The comparison of skin penetration depths across different drug delivery systems. (Image was reproduced with permission from [2]).
Microneedles were developed in 1976 and used for transdermal drug delivery in 1998. They have been intensively studied over the past half-century (Figure 2) [10][11][12][13][14][15][16][17][18][19][20][21]. A “Web of Science” search with the topic of “microneedle” yielded 3407 articles published since 2000 (Figure 3), which indicates the rapid increase of microneedle studies. Moreover, most microneedles are applied in biomedical areas, especially for cancer therapy, skin disease therapy, insulin delivery for diabetes treatment, blood glucose level detection and vaccines [17][22][23][24][25][26][27][28][29][30]. Therefore, in this work, we mainly review the classification, manufacture and biomedical applications of microneedles. The pitfalls of the application of microneedles are also summarized. Given the advantages of microneedle administration, it is promising to optimize the fabrications of microneedles and avoid their disadvantages in future studies. 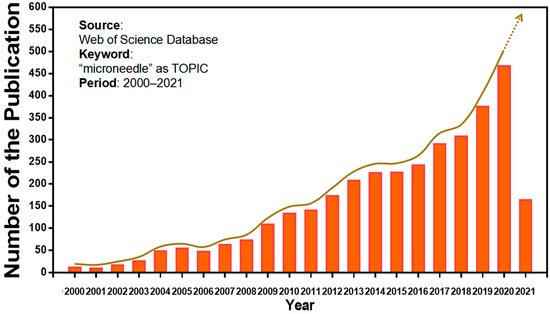 Here, in this review, according to microneedle-based devices, MNs can be divided into five categories: solid, drug-coated, dissolvable, hollow and hydrogel-based microneedles (Figure 4) [31][32]. 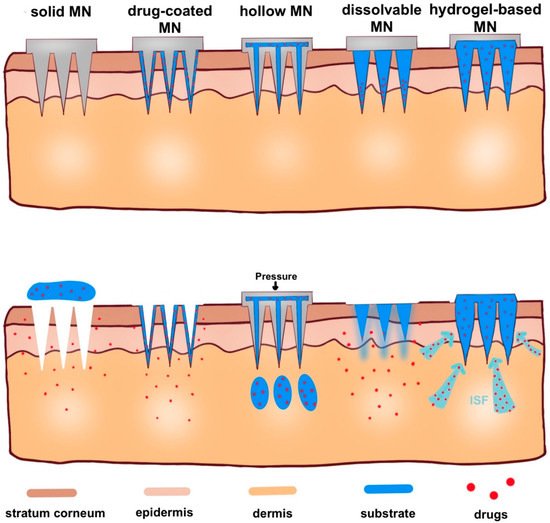 Figure 4. Schematic representation of five types of microneedle administration methods. Solid MNs are inserted into the skin and removed, leaving a channel through which the drug enters. Drug-coated MNs are the same as solid MN, except the drug is on the surface of the microneedles. For hollow MNs, after adding pressure, drug is released from the hollow microneedle. For dissolvable MN, when the microneedle substrate is dissolving, the drugs on the tip of the needle are released. When hydrogel-based MNs swell up from absorbing (ISF), the drug is released into the body.

Solid microneedles are generally made of metal, silicon or polymer for pretreatment of fine incisions and improvement of drug permeability. Sabri et al. found that solid microneedles promoted the ex vivo transdermal absorption of imiquimod (one of the most effective drugs for the treatment of basal cell carcinoma), and the intradermal depot persisted for up to 24 h [33]. However, the application of solid microneedles requires two steps, and they may not be convenient for patients.

Drug-coated microneedles can be used for delivering active molecules such as small molecules [34], proteins [35] and vaccines [36]. At the same time, drug-coated microneedles takes advantage of remaining active for a long time while the dose of the coated drug may be low [37]. Moreover, the drug amount loaded in the coated MNs system is limited. For instance, a maximum of 1 mg of drug can be coated on MNs, while much larger amounts of drugs (up to 33 mg) can be delivered by dissolvable MNs [38].

Dissolvable/biodegradable microneedles dissolve completely upon insertion into the skin and have high biocompatibility—because safe polymers can be used as raw materials—and have high loading capacity [39]. When soluble microneedles were used on mouse ears, the length of microneedles within the skin rapidly decreased to 25% of the initial depth within the first 3 min and then slowly but constantly dissolved over the next 10 min (Figure 5A) [40]. This feature can be used for sustained drug delivery, but it also suggests that patients may need to wait for the microneedles to dissolve in the skin. Thus, Wang et al. designed a kind of microneedle which had bubble-structure microstructures in the body of the needle. The bubble structure promotes the concentration of the drug to the needle tip and enables the drug delivery efficiency to reach over 8% in 20 s in mice (Figure 5B) [41]. However, attention should be paid to whether the mechanical characteristics can be maintained in a humid environment [42]. 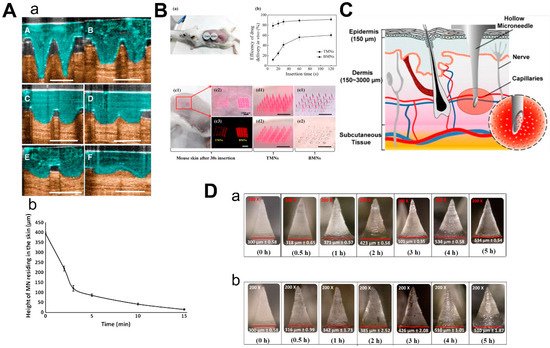 Figure 5. Characteristics of 3 types of microneedles. (A) Diagram (a) and dissolution curve (b) of dissolvable microneedles in mice. (B) Pharmacokinetics of TMN and BMN in mice with different inserting times (a,b) and the comparison of images before and after TMN and BMN are inserted into the skin (from 10 s to 120 s). TMN: traditional microneedle. BMN: bubble microneedle. (C) Schematic diagram of hollow microneedles for blood extraction. (D) Swelling images for hydrogel-based MNs loaded with α-arbutin in porcine skin (ex vivo) and in mice skin (in vivo) at different time points from 30 min to 5 h. (Images were reproduced with the permission from [40][41][43][44]).

Hollow microneedles can be used to inject solutions or suspensions to provide specific channels for therapies targeting specific tissues. Li et al. reported a method to optimize the manufacturing process of hollow microneedles to produce long and sharp microneedles that could reach the vessels for blood analysis (Figure 5C) [43]. Furthermore, hollow microneedles have a good command of the amount of drug and control of the time of the drug’s release, while fabrication was difficult and had risks linked to needle breakage and lumen blockage [45].