Barley grains have the characteristics of high vitamins, high dietary fiber, and high protein contents, which could be stimulated by the accumulation of γ-aminobutyric acid (GABA), phenolics, and other nutrients by germination [1]. At present, a variety of barley seedling products have been launched globally, including Japanese “green juice”, compound powder tablets, solid drinks, cookies, and so on. GABA is a four-carbon non-protein amino acid found in prokaryotes and eukaryotes with the functions of lowering blood pressure, sedation, improving kidney and liver function, and promoting alcohol metabolism in the human body. It is mainly synthesized from glutamate catalyzed by glutamate dehydrogenase (GAD) in the cytoplasm of monocotyledonous plants [2], transported to mitochondria and degraded into succinic semialdehyde (SSA) by GABA aminotransferase (GABA-T). SSA is further oxidized to succinic acid by SSA dehydrogenase (SSADH) from the GABA shunt pathway [3]. GABA is necessary for carbon and nitrogen metabolism in plant growth and development under abiotic stress, including salt, hypoxia, and so on [4]. In addition, reports have shown that GABA also plays a role in signal transmission in plants under stress [5]. The GABA content in soybean increased by 25 times under salt and cold stress [6]. Mayer et al. [7] revealed that heat shock significantly enhanced the content of endogenous GABA in Arabidopsis gallnut cells.
Phenolics, including phenolic acids and flavonoids, are important secondary metabolites with anti-cancer, anti-tumor, anti-aging, and other health-promoting functions, which are mainly formed via the shikimate pathway and malonate pathway in plants [8]. The shikimic acid pathway is an important biological metabolic pathway connecting carbohydrate metabolism and aromatic compounds biosynthesis [9]. Phenylalanine ammonia lyase (PAL), cinnamic acid 4-hydroxylase (C4H), 4-coumalyl CoA ligase (4CL), chalcone isomerase (CHI), chalcone synthase (CHS), flavanone 3-hydroxylase (F3H), and anthocyanin synthase (ANS) are included in this pathway [10]. Among these, PAL is a key bridge connecting primary metabolism and phenylpropane metabolism [11]. Plants accumulate secondary metabolites such as phenolics in response to salt, low oxygen, low temperature, low pH, mechanical stimulation, heat shock, pathogenic microorganism infection, and so on [12]. The mechanism of phenolics accumulation in plants has been studied recently, mainly in relation to the activities and gene expressions of key enzymes involved in the phenolics synthesis pathway [13].
Exogenous GABA induced the synthesis of endogenous GABA and other free amino acids (especially proline) in barley seedlings with an increase of PAL, C4H, and 4CL activity, resulting in the enhancement of total phenolics and antioxidant capacity [14]. Adel et al. [15] found that phenolic substances in Arabidopsis thaliana were abundantly enriched under salt stress. Hela et al. [16] also found that total phenolics and flavonoids contents increased by 1.3 times and 14.5 times, respectively, in lettuce with 100 mmol L−1 NaCl treatment for 12 days. Both GABA and phenolics in barley seedlings could be accumulated under salt stress [14]. GABA has been confirmed to be a signal molecule involved in anabolic regulation under abiotic stress [17]. Ma et al. [14] found that GABA mediates phenolic compounds accumulation and antioxidant system enhancement in germinated hulless barley under NaCl stress (60 mM). However, higher NaCl concentration inhibited the growth and decreased the biomass of barley seedlings [13].
Interestingly, our recent study showed that low NaCl (20 mmol L−1) did not cause the stress effect on barley seedlings, but promoted growth compared with high salt stress, increasing total phenolics content and antioxidant capacity [18]. In addition, a large number of studies have concentrated on phenolic acids metabolism in cereals [19]. Flavonoids, as an important component of phenolics, are worthy of attention. Although the function of GABA in phenolic acids synthesis in barley seedlings under NaCl stress has been reported, the effects of GABA metabolism on phenolics accumulation under low NaCl treatment in barley seedlings is worthy of investigation, as it might be a different mode. Hence, the effects of GABA on the synthesis of phenolic acids and flavonoids in barley seedlings treated with a low concentration of NaCl were investigated on the physio-biochemistry and molecular levels. 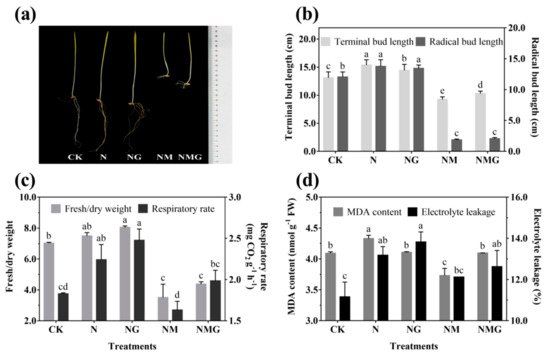 Figure 2. The effect of GABA on the growing status (a), terminal/radical bud length (b), ratio of fresh to dry weight and respiratory rate (c), and MDA content and electrolyte leakage (d) of 6-day-old barley seedlings under 20 mmol L−1 NaCl. The lower case letters for each index indicate significant differences at p < 0.05 among different treatments. One-way ANOVA was used for data analysis. The data were presented as mean ± SD, n ≥ 4.

There have been a large number of studies on the metabolism and accumulation of GABA under salt stress. It has been found that high concentrations of salt increased GABA content, but inhibited the growth of plants at the same time [17]. However, this study showed that low NaCl concentration (20 mmol L−1) did not inhibit the growth of barley seedlings, but promoted the growth status (Figure 2). Simultaneously, the endogenous GABA level significantly increased (Figure 1a), due to a higher level of GAD activity compared with CK (Figure 1b). GABA, as a signal molecule, has been widely studied in plant stress signal transmission [2]. This study found that total phenolics and flavonoids contents were significantly increased by GABA under N treatment, and decreased by 3-MP. The further added GABA had a certain recovery effect on total phenolics and flavonoids contents (Figure 3), indicating that GABA participated in the synthesis of phenolics under N treatment.
Phenolics are mainly distributed in the cortex of plants, combined with cellulose, hemicellulose, and other non-starch polysaccharides [12], which play a critical role in resisting adversity and protecting plants from abiotic and biotic stress [13]. The synthesis of phenolics is closely related to the growth of plants. NaCl (20 mmol L−1) significantly promoted the growth of barley seedlings and increased phenolics content. GABA further promoted the above effects under N treatment (Figure 2 and Figure 3), indicating that GABA promoting the accumulation of phenolics was primarily related to the promotion of growth of barley seedlings. Total phenolics and flavonoids contents of barley seedlings increased significantly by 11.64% and 14.52% under N treatment, respectively (Figure 3), and led to an increase of ABTS and DPPH free radical scavenging ability (Figure 4). As a signal molecule, GABA plays a key role in the response of plants to external stimuli. Under salt stress, GABA accumulated in germinated soybean [4], faba bean [20], and brown rice [21]. At the same time, GABA promoted the synthesis of phenolics under NaCl stress (60 mmol L−1) in barley seedlings [13]. Although low concentrations of NaCl promoted the growth and biomass accumulation of barley seedlings in the present study, MDA content and electrical leakage also increased significantly (Figure 2d), indicating that low concentration of NaCl also slightly caused damage to the tissue and cells of seedlings. Simultaneously, the synthesis of endogenous GABA was also activated (Figure 1), and GABA participated in phenolics synthesis of barley seedlings stimulated by low concentration of NaCl (20 mmol L−1). 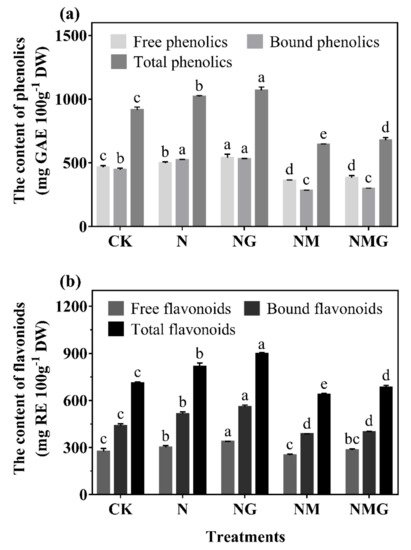 Figure 3. The effect of GABA on phenolics (a) and flavonoids (b) contents in 6-day-old barley seedlings under 20 mmol L−1 NaCl. The lower case letters indicate significant differences at p < 0.05 among different treatments. One-way ANOVA was used. The data are presented as mean ± SD, n ≥ 3. 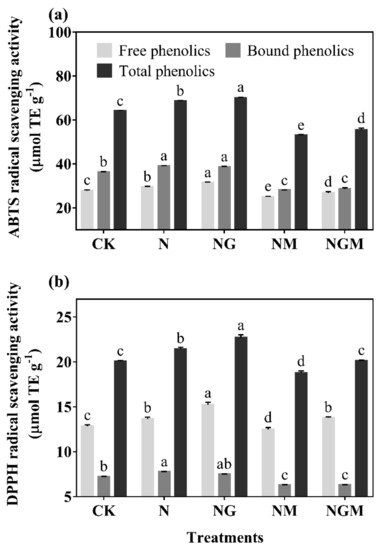 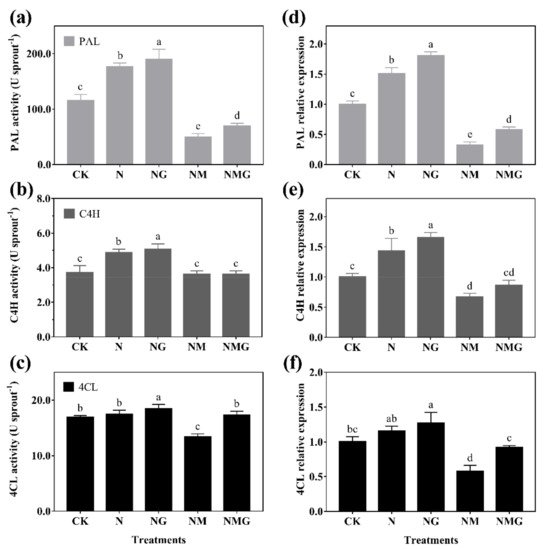 Figure 5. The effect of GABA on PAL activity (a), C4H activity (b), and 4CL activity (c), and their gene expression (d–f), for 6-day-old barley seedlings under 20 mmol L−1 NaCl. The lower case letters indicate significant differences at p < 0.05 among different treatments. One-way ANOVA was used. The data are presented as mean ± SD, n = 4. 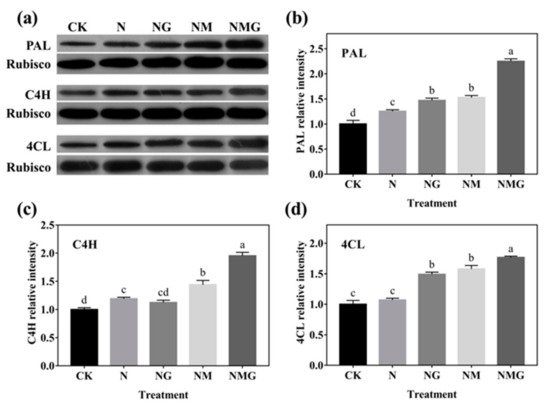