Cyclodextrins (CDs) are a well-known excipient for complexing and drug delivery. Anti-inflammatory drugs and bioactive compounds with similar activities have been favored from these CD processes. CDs also illustrate anti-inflammatory activity per se.

Inflammation is a biological process of the immune system in response to harmful stimuli, such as pathogens, damaged cells, or toxic compounds. Inflammation is a hallmark of many diseases including cancer and auto-immune diseases such as psoriasis and rheumatoid arthritis [1]. Immune cells, blood vessels and different immune-mediators are timely orchestrated with the ultimate goal of restore homeostasis by eliminating the initial cause of the damage, achieve resolution, and promote regeneration [2]. Genetic and environmental factors can easily disrupt such precise process interfering with the resolution of inflammation and uncontrolled acute inflammatory response gives place to chronic inflammation, which contributes to a variety of chronic inflammatory conditions [3]. The field has vastly focused on pharmacological ways, not only drugs but also bioactive compounds, to help control and resolve inflammatory responses in multiple scenarios. However, some of them could present low stability or bioavailability needing a formulation improvement. An increase in the drug quantity is sometimes a good solution, but it can cause an increase in adverse side effects. For that reason, the desired solution starts with the increase of stability or bioavailability of the molecule changing the formulation, by for example using cyclodextrins (CDs) [4].

CDs are well-known members of the science community for their uses to solubilize poor-soluble drugs [4][5][6]. Chemically, CDs are truncated cone-shaped oligosaccharides made up of α-(1,4) linked glucose units, obtained by the degradation of starch by the enzyme cyclodextrin glucosyltransferase. The most common CDs are the natural α, β and γ-CD, which contain six, seven and eight glucose units, respectively. The CD ring is a conical cylinder of an amphiphilic nature, with a hydrophilic outer layer (formed by the hydroxyl groups) and a lipophilic cavity [7][8]. When poorly-soluble drugs are complexed with CD, it is created the so-called “inclusion complex” [9][10][11]. To improve the properties of CD monomers, different chemically obtained derivates (e.g., Hydroxylpropyl-β-CD or Methyl-β-CD among others) and polymers have been shown to possess better capacities, such as complexation efficiency or release than natural CDs [12][13][14]. The administration of the drug as complex could increase the efficacy and capacities of the formulation, being an interesting point to improve current treatments. The present review aims to provide a general overview of the use of CDs and their derivatives in the control of inflammation and related processes.

In the local acute inflammation, vascular changes and the infiltration of immune cells, mainly neutrophils and macrophages, into the tissues could cause swelling, pain, fever and erythema [15]. When the damage has been cleared, the acute inflammatory process is resolved through the release of pro-resolution and anti-inflammatory molecules, such as protectins, maresins, resolvins and lipoxins [16][17][18][19]. In the case that resolution is not achieved and acute inflammatory response is sustained, a chronic inflammatory response is established and could last several months to years. When inflammation becomes chronic, most characteristics of acute inflammation, such as immune cell accumulation and increased vascularity, continue. However, among the infiltrated cells, in chronic inflammation, there are also lymphocytes [15]. At this stage, neutrophil degranulation promotes lymphocyte activation, which triggers the release of mediators that attract more immune cells to the inflamed tissue. Chronic inflammation could occur when the response is not able to clear a pathogen, in hyper-sensitivity diseases, like autoimmune or allergic diseases, and during long-time exposure to a toxic agent exogenous or endogenous, such as silica or cholesterol, respectively [19].

There is a rising incidence in modern societies of cases of systemic chronic inflammation and chronic inflammatory diseases, which are becoming one of the major causes of morbidity and mortality in developed countries [20][21][22]. Systemic chronic inflammation increased the risk of suffering different diseases, like some types of cancer [23], non-alcoholic fatty liver disease [24], metabolic syndrome [25] and type-2 diabetes [26]. C-reactive protein (CRP) is the main chronic inflammation biomarker, it has been associated with an increase in risk for coronary heart disease and cardiovascular disease mortality [27][28]. There is a large range of chronic inflammatory disease, rheumatoid arthritis, diabetes, inflammatory bowel disease, atherosclerosis, Crohn’s disease, allergies, asthma or psoriasis are some examples among them. Due to this situation, in recent years, several studies using different animal models and clinical trials have been focused on finding new molecular targets and compounds to treat these chronic conditions [29][30][31][32].

Corticosteroids are one of the most effective therapy to treat chronic inflammatory diseases. They suppress the multiple inflammatory genes by reversing histone acetylation through binding to glucocorticoid receptors [33]. They are commonly used to treat autoimmune diseases, asthma, psoriasis and rheumatic arthritis. Long-term use of corticosteroids could lead to developing adverse effects, like hypertension, metabolic issues and peptic ulcer [34].

Usually, chronic inflammation disease treatments are limited, and their efficacy diminishes along the application time. One of the most powerful is the biologic therapy, which consists of the use of antibodies (suffix -mab) or fusion proteins (suffix -cept) that target specifically the main pro-inflammatory cytokines like TNF-α and IL1-β and block them [35][36]. This approximation usually is used when other treatments are not effective, due to possible side effects [37].

3. Cyclodextrins as Agents for Treatment

In this section, the effect of CDs alone and complexed with drugs and bioactive compounds against inflammation is discussed ( Figure 1 ). 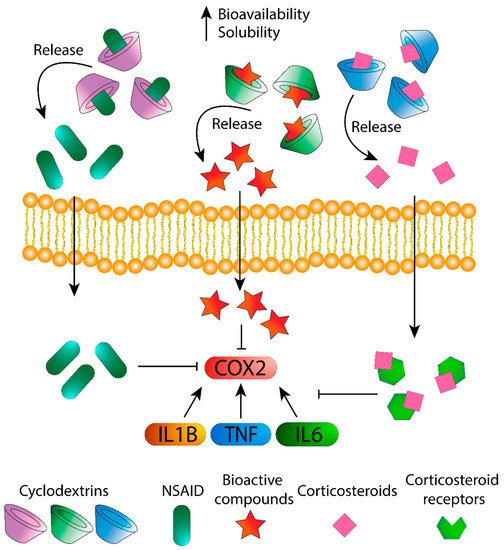 Figure 1. Schematic representation of CD/Corticosteroids and some CD/bioactive compounds complexes against inflammation (depending on the molecule, the pathway could change).

In-depth knowledge of CDs, as well as the efforts for the optimization of CD formulations, has led to the development of supramolecular structures (e.g., self-assembled systems, cross-linked polymers, drug-conjugates), which improved the limits of single CDs and transformed them into advanced drug delivery systems [38][39].

Ellagic acid complexed with β-CD was also able to protect erythrocyte membrane from lysis induced by heat and hypotonicity, as well as protect albumin from denaturation, demonstrating that the encapsulation improves the anti-inflammatory effects of the bioactive compound [40]. Although the authors prepared 1:2 complexes with CDs, it has been described that ellagic acid can form 1:1 complexes with CDs in the presence of borax [41].

Some natural compounds from citric fruits have also been encapsulated in cyclodextrins and their anti-inflammatory activity evaluated in animal models. This is the case of citral/β-CD and citral/HPβ-CD complexes which reduced total leukocyte migration into the pleural cavity and TNF-α levels in Swiss mice fed with 100 mg/kg [42]; naringenin/HPβ-CD complexes which also decreased TNF-α levels and showed similar activity to that achieved with naringenin as supplied but administering only one-fifth of its dose [43]; and limonin/β-CD and limonin/γ-CD complexes which reduced the volume of paw edema in Wistar rats fed with 0.12 mg/kg, as well as, improved articular function by the decrease in the degree of bone resorption, soft tissue swelling and osteophyte formation [44].

In the light of the considerations made above, it is clear that CDs respond to the need to optimize treatments that already exist, making them more effective, stable and safe. Encapsulation of CDs has been demonstrated to be efficient in solving these kind of issues [8][45] while maintaining or even increasing the biological activity of these agents because they act as multifunctional excipients in that they are solubility enhancers, prevent drug–drug and drug–additive interactions within a formulation, eliminate unpleasant smells or tastes and reduce side effects [5][46][47][48]. Even their own activity as active drugs could promote possible synergetic capacities [49]. In fact, they can be found in numerous pharmaceutical forms, e.g., tablets, suppositories, droplets and spray.

Last but not least, they can be used to develop advanced drug delivery systems that go beyond the limits of single cyclodextrins. As a perspective, all these properties have been found to be ideal for the formulation of anti-inflammatory drugs and bioactive compounds. In addition, novel CDs are created to improve the possible limitations, being able to complex not only drugs but also heavier molecules such as proteins. Bearing the above features in mind and judging by the number of studies conducted, they are certainly in the limelight, so research on this topic is far from over.

In conclusion, this review emphasizes the role of CDs for inflammation treatment. They have been used to improve the release and bioavailability of different approved drugs. Similar studies have been carried out with bioactive compounds where the managing of inflammation responses such as oxidation and the expression of pro-inflammatory cytokines were reduced. On the other hand, CDs have demonstrated their own capacities with cholesterol mediated inflammation processes, managing the complement activation. In summary, this review indicates a possible combinatorial effect where the drug is complexed with CDs against inflammation. In simple terms, the application of CD lays the groundwork for future progress opening up a new realm of other advanced applications expected to arise soon.