Torreya grandis (T. grandis) is an old relict species within the family of Taxaceae that is endemic in China, often referred to as Chinese Torreya. It has been one of the most economically important tree species in the subtropical region of China.

2.1. Effects of Fertilizer on Soil Condition

Long-term N deposition and fertilization could elevate soil nutrient concentration beyond the demand of the plant, altering the soil nutrient cycles [46]. Because most soils in subtropical areas are severely acidic, improper and excessive use of fertilizers could further deteriorate soil physical, chemical, and biological properties, especially aggravating soil acidification and soil hardening. Decreases in soil pH caused by fertilizer will likely reduce soil microbial and enzyme activities, which subsequently reduces organic matter mineralization and ultimately reduces “chemical facilitation” [47], which presented obviously with intensifying N fertilization in this study.

2.2. Effect of Fertilizer on Plant C, N, and P Stoichiometry

One of the primary goals of this research is to evaluate whether T. grandis requires extra fertilization or whether adding additional nutrients can improve seed production. In the present study, fertilization tended to increase the foliar nutrients ([C], [N], [P]), but only the increase in [P] was statistically significant in the N + P addition scenario. The steady foliar [N] under increasing fertilization may indicate diminished N-limitation to plant growth, which can be explained by a plant behavior developed from adjusting to nutrient-abundant environments. A significant increase of leaf [P] in N + P scenario resulted in a distinct decrease in the C:P and N:P ratios. According to the growth-rate hypothesis, plant invests more phosphorus to RNA for rapid protein synthesis in fast-growing organisms [48]. Hence, the opposite condition, high leaf [P], indicated a low-growing condition of T. grandis under high fertilization, which was confirmed by the statistical results of annual shoots.
The soil nutrient pool (TN, TP, HN, and SOC), under long-term fertilizer treatment, was much higher than that in other subtropical areas [49][50]. Long-term soil nutrient enrichment resulted in much higher T. grandis foliar nutrient (N and P) contents than the average values of 753 terrestrial species [51] and other subtropical evergreen trees [52]. Due to the different N and P utility patterns in physiological processes, regardless of species and site fertilizer supply, plants can store a greater percentage of inorganic P than N. Thus, with increasing fertilizer addition, foliage accumulated more P than N [44]. It was also observed that some plant species growing in P-limited environments might not downregulate P uptake when a higher supply of P is available [44][53][54]. When the environment P supply shifts from P-limited to non-limited condition, the plants may undergo an excessive P uptake, even to saturated or toxic levels. Hence, foliar [P] usually displays a much higher variation after fertilizer treatments. Therefore, it is not surprised that the foliar [P] nearly doubled after a high fertilizer treatment compared to the control group (Figure 1). Given the generally low bioavailability of P in subtropical soils, T. grandis may have developed an efficient mechanism to take up and accumulate P in response to the strong selective pressure [55][56]. Unlike previous studies [21][57][58][59][60][61][62], leaf [N] of T. grandis didn’t change much in response to the increasing soil [N] availability, which implied that fertilizer treatments had no effect on T. grandis N absorption (Figure 2). In this scenario, relatively stable leaf [C] and [N], but increased leaf [P], led to opposite trends between C:P and N:P and soil nutrient content (Figure 2). Therefore, our findings answered the first question, that long-term fertilization, combined with increasing nitrogen deposition, results in a N-enriched environment. This result also confirms that N-limitation has been generally alleviated in this subtropical forest; while P-limitation in the study area was aggravated by N enrichment [51][60][61]. 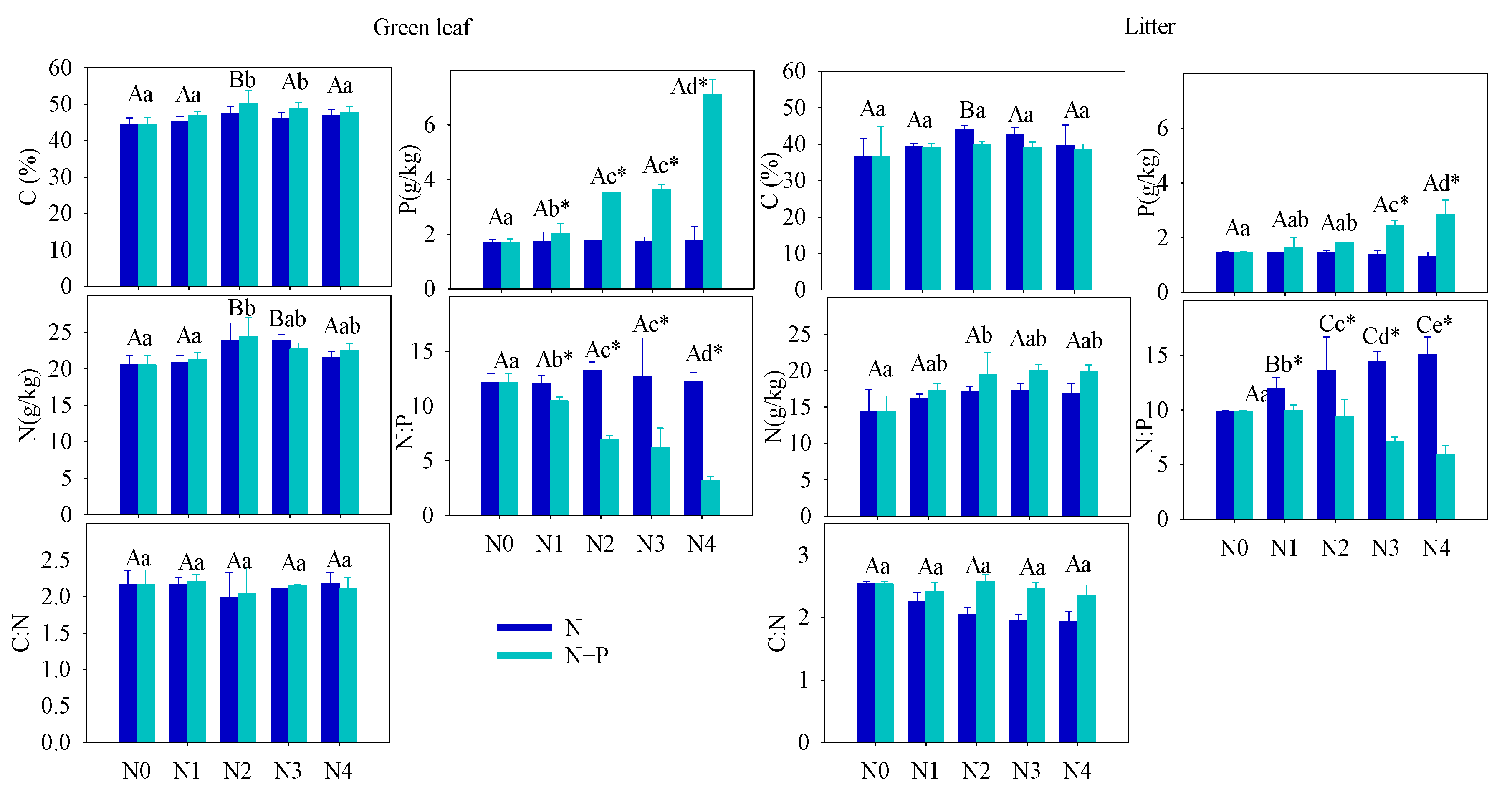 Acquisition (root uptake) and conservation (resorption from senescent tissue) are two important biological strategies for plants to maintain balanced nutrition where soil nutrients are deficient. These processes are also important in cycling nutrients between the soil and plants [63]. Choosing between alternative strategies for plants depends on the cost (time and energy) of each process and the species characteristics. Short-term experiments have demonstrated that, generally, plants will reduce nutrient utilization efficiency when the surrounding nutrient availability increases [64], while the relationship between foliar resorption and soil nutrient concentration is not consistent [34][65][66].
Nutrient resorption was another important index indicating environmental nutrient deficiency or not. Our results indicated a constant or slight decreased NRE, which further verified our supposition concerning N enrichment in these orchards (Figure 3). According to nutrient balance theory, N addition aggravated P-limitation that was illustrated by increasing PRE. However, increased P migration from senescent leaf to green leaf (PRE) in response to increasing N + P fertilizer supply conflicts with the negative correlation between fertilizer treatment and nutrient resorption [64]. This kind of counterintuitive result has been observed in a single-resource conservation standpoint in previous studies [67][68]; yet multiple-element theory much more appropriately explains variability in foliar nutrient resorption [60]. Based on a Pearson correlation analysis, we found that green leaf [P] was not related to soil [AP], but it was highly correlated with soil N content. It should be noted that the root system can directly uptake inorganic nutrients (AP and HN) and therefore plays a more important role in nutrient absorption than organic nutrients. This inorganic nutrient preference may help explain the absence of a common trend in studies comparing P resorption to soil P availability [34][66]. Herein, although the soil and leaves were characterized by a higher [P] compared to other studies of evergreen trees [69], excess N addition was responsible for the amplified P-limitation (Figure 3), which subsequently elevated leaf P uptake directly [70][71].

Long-term fertilizer treatments increased soil N and P significantly in T. grandis orchards, which increased leaf N and P concentrations, but there was no obvious positive impact on T. grandis growth but only a negative impact on seed yield under heavy fertilizer application. Herein, N enrichment was indicated by stable and decoupling relationships between the soil and leaf [N]. Leaf [P] was highly correlated with soil [N], and N enrichment amplified the physiological P limitation (deficiency). Excessive N addition interfered T. grandis’s sensibility to P availability in this N-enrichment area, which is indicated by increasing PRE with both modes of fertization intensity. Therefore, leaf [P] or the N:P ratio may not reflect the actual demands of the plant under the P addition conditions herein. Furthermore, large amount of fertilizer application might waste resources and alter soil physicochemical properties (e.g., soil acidification). Decreasing fertilizer application should be taken into consideration to accomplish the sustainable development of the orchard ecosystems.