Despite the advances that have been achieved in developing wound dressings to date, wound healing still remains a challenge in the healthcare system. None of the wound dressings currently used clinically can mimic all the properties of normal and healthy skin. Electrospinning has gained remarkable attention in wound healing applications because of its excellent ability to form nanostructures similar to natural extracellular matrix (ECM). Electrospun dressing accelerates the wound healing process by transferring drugs or active agents to the wound site sooner.

Skin plays an essential role in protecting our body against any physical and chemical injury and water loss, and contributes to the maintenance of bodily homeostasis [1][2][3]. After damage, the skin should restore its integrity to maintain its functions. Wound healing is a vital and complex physiological process consisting of the collaboration of many cell strains and their products [4]. In this process, the growth factors induce cell proliferation, which leads to a combination of several dynamic changes, including soluble mediators, blood cells, the production of the extracellular matrix, and the proliferation of parenchymal cells [5][6]. In healthy skin, the outer layer is the epidermis, which is impermeable and resists the external environment. The dermis, the inner layer of skin, is full of extracellular matrix (ECM), mechanoreceptors, and vasculature, and this layer can also provide the skin with immunity, nutrients, and mechanical strength [6][7].
In general, a wound is a type of injury that involves damage to the epithelial tissue and causes a lack of skin integrity. Wound healing is a natural physiological response to tissue damage. In general, wound healing is performed with four specific stages of hemostasis, inflammation, proliferation, and maturation (Figure 1) [8][9][10]. ECM plays a crucial role in every step of the wound healing process. The ECM acts as a supporting scaffold, which is necessary at all stages of the repair phenomenon [11]. The role of ECM is not only in the activity of cytokines and signaling within cellulitis, but also in mechanical support, which is helpful for activating and regulating the pathways of cell differentiation and proliferation [12][13].
Successful tissue regeneration depends on the complex function and fibrous form of native ECM stimulated by skin substitutes or wound dressing membranes [14]. Various biocompatible and biodegradable scaffolds have been created with three-dimensional cell proliferation as a suitable dressing membrane for wound healing [15][16]. Extensive studies in the field of tissue engineering have been performed to define tissue engineering as described in the workshop of the National Science Foundation, and the role of scaffolds in maintaining and improving tissue function and reconstruction is undeniable [17]. 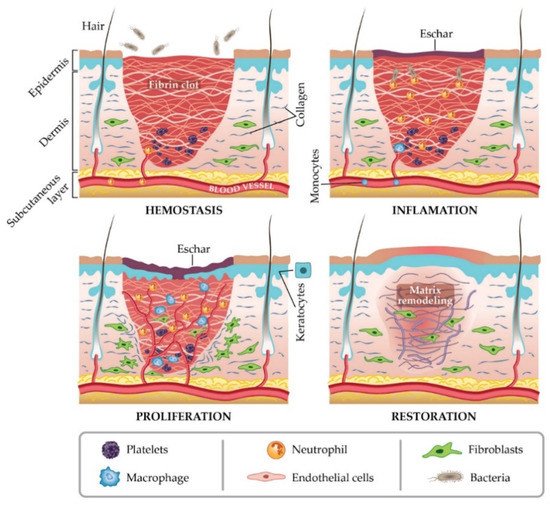 Figure 1. Stages of wound healing. Adapted from I. Negut, V. Grumezescu, A.M. Grumezescu, Treatment strategies for infected wounds, adapted from [18].
Electrospinning is a simple and effective technique that uses electric force to produce nano-/micro-scale continuous fibers made of a polymer solution Figure 2A. The nanofibrous membrane has impressive advantages as skin scaffolds compared to conventional and non-fibrous structures such as hydrogels, due to their similarity to native ECM of skin tissue, so they can be considered as potential scaffolds providing cell adhesion and proliferation, and eventually induce neodermis regeneration [19][20][21].
To date, the electrospinning method is the most practical technique in the field of advanced scaffolds for tissue engineering and delivery of bioactive agents to damaged tissue, which has attracted the attention of researchers [8]. One of the most practical electrospinning methods in tissue engineering is skin regeneration [22][23][24][25][26][27]. Synthetic polymers are not inherently bioactive, and by combining with some active components, the bioactivity of synthetic polymers can be improved [28]. The electrospinning technique allows the production of a suitable nanofibrous membrane to deliver bioactive agents or pharmacological agents to the damaged site of skin to accelerate the skin regeneration process [14][29]. Bioactive incorporation into electrospun nanofiber membrane could be done in four different ways represented in Figure 2B–E. 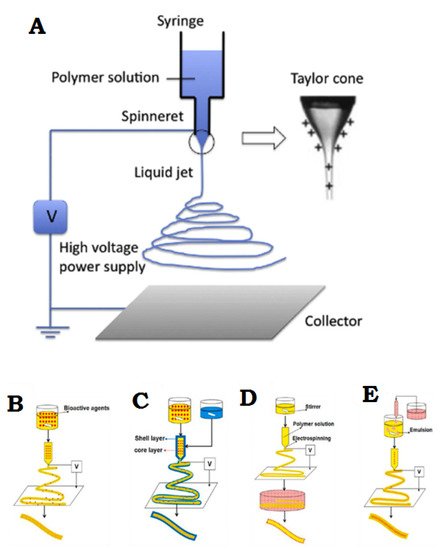 A new generation of wound dressings with the ability to quickly accelerate the wound healing process is nanofiber membranes with active materials. The production of this type of membrane can be performed using any kind of electrospun solution. In general, a biologically active factor can be considered to play an active role in the recovery process. Bioactive agents include antibacterial particles, growth factors, stem cells, vitamins, and other factors that are effective in wound healing in combination with nanofiber membranes.
In a new study, for the first time, a hybrid nanofiber membrane was proposed as a bioactive wound dressing by Homaygohar et al. The results of this study showed that biohybrid nanofibers have elastic modulus and elongation (300% and 58%, respectively) comparable to regular poly(ε-caprolactone) (PCL) nanofibers. Survival of WST-8 cells, and NIH3T3 fibroblasts proliferating correctly and interacting with biohybrids were observed in the experimental results. It was also concluded from SEM images that cells can adhere to such nanofibers even better than pure PCL cells. As a result, sufficient traction and mineralization through this BSA/PCL nanofiber biohybrid membrane can accelerate the wound healing process and be considered a suitable option for wound dressing applications [28].
In another study, Cerium-doped bioactive glass (Ce-BG)-loaded chitosan/polyethylene oxide (PEO) nanofibrous scaffolds were fabricated as antibacterial wound dressing. Chitosan/PEO scaffolds had been modified to overcome the instability and mechanical properties problems of these scaffolds in aqueous solutions. Numerous parameters including mechanical properties, antibacterial activity against Gram-positive and Gram-negative bacterial cells, ion release behavior, and swelling properties were studied in this research. This study shows that increasing the Ce-BG/CH (w/w) ratio up to 20% (w/w) can increase the swelling and mechanical properties of scaffolding. By further increasing the ratio, the effects of Ce-BG affinity on the above are reduced. In addition, chitosan/PEO scaffolds containing Ce-BG had mechanical properties very close to those of the skin, and the results showed that they were only 20% shorter than the required length when breaking skin tissue scaffolds, which increased in length by 28.6% when broken [32].
Another interesting study was designed and conducted using Lemon Oil (LMEO) as a natural and highly antibacterial bioactive agent for making electrospun cellulose acetate (CA) nanofiber membranes by Bekzadeh et al. The chemical, antibacterial, morphological, thermal and optical properties of LMEO-loaded CA nanofiber scaffolds were investigated.
The degradation profile of CA with LMEO composition showed no change in the results of the calorimetric analysis. LMEO-loaded CA electrospun nanofibers 100% eliminated Escherichia coli and Staphylococcus aureus in the antibacterial evaluation, even at the lowest LMEO loading concentration. LMEO electrospinning fiber membranes show that nanofibers can retain their antibacterial properties even after two months of storage. Consequently, this nanofiber structure may be a potential candidate as a bioactive wound dressing with long-lasting antibacterial activity [33].