The present study reported the investigation of the chemical profile and the extraction yield of the essential oils (EOs) obtained from the dried aerial parts of four cultivars of Salvia rosmarinus (‘Boule’; ‘Vicomte de Noailles’; ‘Gorizia’; ‘Joyce de Baggio’) and the species S. jordanii, together with their antibacterial and antifungal activities. The phytochemical investigation evidenced a predominance of oxygenated monoterpenes in all the samples (57.5–77.1%), except in ‘Boule’, in which the hydrocarbon form prevailed (50.2%).

The genus Rosmarinus L., belonging to the Lamiaceae family, was recently included in the genus Salvia L. [1]. Salvia subg. rosmarinus comprise three species of aromatic plants [2]: Salvia rosmarinus Spenn. (synonym of Rosmarinus officinalis L., and isonym of Salvia rosmarinus Schleid), Salvia jordanii J.B.Walker (synonym of Rosmarinus eriocalyx Jord. & Fourr.), and Salvia granatensis B.T.Drew (synonym of Rosmarinus tomentosus Hub.-Mor. & Maire) [3][4]; only the first two species are widely used in traditional medicine [5] and as cooking ingredients [6].
S. rosmarinus, commonly known as “rosemary”, is the most known species. It is an evergreen shrub, able to grow in every type of soil, with predilection for dry and rocky ones. It is no coincidence that it is widespread in the Mediterranean area, in particular in the coastal scrub [7]. It is widely used for its aromatic and medicinal properties [8], determined by its content in secondary metabolites. Among these, the essential oil (EO) responsible for the pleasant smell is the principal product obtained from this plant by industries [9], as it can be exploited for the treatment of skin, digestive, and renal problems, as well as for headaches [10]. On the basis of its main EO components, S. rosmarinus can be distinguished in different major chemotypes, including cineoliferous (1,8-cineole > 40%) [2], camphoriferous (camphor > 20%), verbenoniferoum (verbenone > 15%) [2][11], and α-pinene chemotype (α-pinene as the major component) [9]. The chemical composition of rosemary essential oil has been widely investigated in relation to different geographical locations of collection, environmental conditions, and seasonal periods. As reported by Cioni et al., soil and climatic conditions only partially modulate the biosynthesis of the main chemicals of the EO which, instead, is mainly determined by the genetic heritage of the plant [12]. Nevertheless, the differences are mainly quantitative rather than qualitative [5].
S. jordanii (ex. R. eriocalyx Jord. & Fourr., previously known as R. tournefortii De Noé), is an aromatic evergreen bush like rosemary, but it has been introduced into cultivation only in the last decades [13]. It is typical of Algeria, Spain and Morocco, preferring mountain rocky grounds and pastures. It differs from S. rosmarinus for some morphological characters such as the smaller leaves, the woolly calyx, and the prostrate growth [6]. As opposite to S. rosmarinus only few studies have been conducted on the chemical composition of S. jordanii essential oil, most of which also investigated its antibiotic activity [5][13][14][15].
The essential oils obtained from both S. rosmarinus and S. jordanii have been reported in numerous studies for their antibacterial and antifungal properties, as the aerial part of these plants have been widely used since ancient times as natural preservatives [9][16]. Abers et al. reported the essential oil of R. officinalis as a good broad-spectrum antibacterial agent [17], and Soulaimani et al. highlighted a better activity against Gram positive bacteria than against the Gram negative ones [18]. In recent times, the EOs, which are complex mixtures of secondary metabolites characterized by high volatility and strong smell [19], have received significant interest for their antibacterial and antifungal properties given the change in consumer behaviour toward a preference for natural products [16][20].

The complete compositions and the extraction yields of the essential oils (EOs) obtained from the dried aerial part of the samples are reported in Table 1. The following taxa acronyms were used: Boule = S. rosmarinus ‘Boule’, Gori = S. rosmarinus ‘Gorizia’, Joyce = S. rosmarinus ‘Joyce de Baggio’, Vicom = S. rosmarinus ‘Vicomte de Noailles’, and Jord = S. jordanii. Overall, 65 compounds were identified, accounting for 98.6–100% of the total composition.
Table 1. Complete composition and extraction yield (% w/w dry weight) of the essential oil obtained from the samples of S. rosmarinus and S. jordanii.
According to Flamini et al. (2020) [2] monoterpenes are the main class of compounds in Rosmarinus genus: indeed, the EO obtained from S. rosmarinus ‘Boule’ was characterized by a predominance of their hydrocarbon derivatives (50.2%), while those obtained from the other four samples presented more oxygenated ones.
Nevertheless, monoterpene hydrocarbons were well-represented in all the samples, accounting for up to 50.2% in Boule, followed by Joyce (36.0%), Gori (24.0%), Jord, and Vicom (14.3 and 14.2%, respectively). α-Pinene, camphene, β-pinene, and limonene were the main chemicals of this class, but only the first reached considerable relative amounts, up to 37.3% in ‘Boule’ and 25.6% in ‘Joyce’.
Oxygenated monoterpenes, indeed, resulted more abundant in Jord and Vicom (77.1% and 71.9%, respectively), followed by Joyce and Gori (60.9% and 57.5%, respectively) and Boule (46.9%). Within this chemical class, 1,8-cineole (11.4–23.9%), camphor (3.3–42.2%), borneol (0.6–14.6%), 4-terpineol 0.9–2.8%), α-terpineol (2.0–2.9%), verbenone (0.6–14.9%), and bornyl acetate (0.2–10.8%) were the most representative compounds, as they were detected in all the samples, even though with a high variability in their relative abundances.
Sesquiterpenes were also detected in appreciable relative amounts: the EOs obtained from Gori and Jord presented a predominance of the hydrocarbons form, and Vicom of the oxygenated form. In Boule and Joyce, this chemical class was poorly represented. β-Caryophyllene (0.2–6.7%) and caryophyllene oxide (0.4–4.3%) were identified in each sample; noteworthy was the amount of 14-hydroxy-9-epi-(E)-caryophyllene in Vicom (7.1%).
All the most representative compounds detected in the EOs were typical chemicals of the essential oils of S. rosmarinus [9] and S. jordanii [5][14].
The EO extraction yield presented significant differences among the samples: Vicom was the most productive one (2.25% w/w), followed by Gori (1.17% w/w), while Joyce, Jord, and Boule presented the lowest yields (0.76 > 0.71 > 0.56% w/w, respectively).
This is the first time that the essential oil composition of the four cultivars of S. rosmarinus (‘Boule’; ‘Vicomte de Noailles’; ‘Gorizia’; ‘Joyce de Baggio’) was reported to better employ this plant material not only as ornamental display items but also as derivative products for industrial use.

The first axis of PCA explained 62.4% of variance, the second axis (PCA2) a further 25.1% (Figure 1). Vicom segregated alone, while the other taxa were distributed into two groups, one formed by Gori and Jord, and the other one made up by Boule and Joyce. Nine chemical compounds showed a significant discriminative function between the taxa. Vicom was characterized by high amounts of camphor (28) and 14-hydroxy-9-epi-(E)-caryophyllene (62). Gori and Jord differed in their predominance of camphene (4), borneol (31), bornyl acetate (44), and α-humulene (52). Lastly, Boule and Joyce were characterized by high amounts of α-pinene (3), myrcene (8), and verbenone (38). 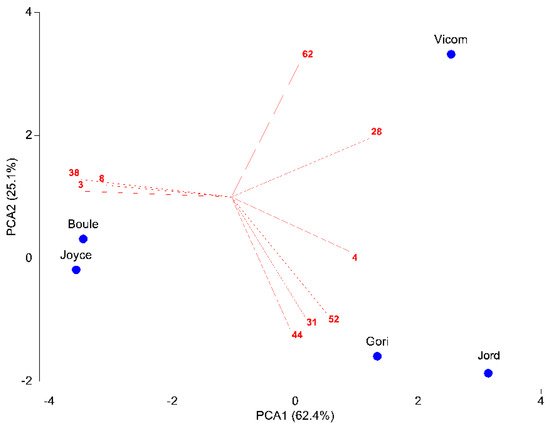 In vitro antibiotic sensitivity tests detected multi-resistance of the assayed bacterial isolates (Table 2).
Table 2. The inhibition zones expressed in millimeters resulted from the application of different antibiotics against the selected bacterial strains (S: susceptible; R: resistant; I: intermediate).
Enterococci emerged as the bacterial isolate with resistance to most antibiotics. Enterococcus spp. have a strong ability to acquire, express and transfer antimicrobial resistance [21], and our findings are in agreement with other studies reported in the literature [22].

All the analysed EOs were characterized by a predominance of oxygenated monoterpenes (57.5–77.1%), except that of ‘Boule’, in which the hydrocarbon form prevailed (50.2%). Considering the whole chemical composition, a total of nine compounds showed a significant discriminative function between the samples. ‘Vicomte de Noailles’ was characterized by high amounts of camphor and 14-hydroxy-9-epi-(E)-caryophyllene; ‘Gorizia’ and Jord differed for their predominance of camphene, borneol, bornyl acetate, and α-humulene and, lastly, ‘Boule’ and ‘Joyce de Baggio’ were characterized by high amounts of α-pinene, myrcene, and verbenone.