Histone deacetylase 3 is the core component of the nuclear receptor corepressor complex, and plays a central role in transcriptional repression mediated by nuclear hormone receptors.

Nuclear hormone receptors (NRs) regulate the transcription of target genes in the nuclei in response to small lipophilic hormones [1]. The transcriptional regulation by NRs is mediated mainly by the interaction with coregulators, including coactivators and corepressors [2]. Basically, NRs suppress transcription in coordination with corepressors, and coactivator interaction is responsible for transcriptional activation by NRs.
Epigenetic histone modifications are highly correlated with transcriptional regulation [3]. Among numerous modifications, acetylation of lysine residues in N-terminal histone tails is one of the most established marks of an open chromatin structure and transcriptional activation [4]. Whereas many coactivators exhibit histone acetyltransferase (HAT) activity [5], corepressor complexes tend to possess histone deacetylase (HDAC) activity [6]. Although there are several HDACs, HDAC3 plays pivotal roles in NR-dependent signal transduction.

NRs bind to their response elements in the DNA as heterodimers with retinoid X receptor (RXR), homodimers, or monomers, and regulate transcription of the target genes [7]. A group of NRs, including thyroid-hormone receptor (TR), retinoid A receptor (RAR), and vitamin D receptor (VDR), form heterodimers with RXR on their target genes. The N-terminal regions of these NRs are relatively small. In the absence of ligands, these NRs are associated with corepressor complexes that possess HDAC activity and suppress the transcription of the target genes, which is called ligand-independent repression [8]. Two major corepressor molecules for NRs are nuclear receptor corepressor (N-CoR) and silencing mediator for retinoid and thyroid-hormone receptors (SMRT, also known as N-CoR2). When the ligands are present, corepressors dissociate and coactivators with HAT activity are recruited instead [9] (Figure 1). This exchange is mainly due to the conformational change of NRs induced by ligands. The unliganded NRs favor binding to corepressors. Upon ligand binding, the ligand binding domain undergoes a structural transition called the “mousetrap” mechanism [10], which allows the interaction with coactivators. The cofactor exchange does not actually follow such an “all-or-none” switch model. It was revealed in vivo that the expression of TR-target genes is regulated by a shift in the relative binding of corepressors and coactivators [11]. It should be noted that these NRs similarly work as homodimers, depending on the target genes.

Figure 1. Cofactor exchange by heterodimeric nuclear receptors. In the absence of ligands, these NRs are associated with corepressor complexes that possess HDAC activity and suppress the transcription of the target genes, which is called ligand-independent repression. When the ligands are present, corepressors dissociate, and coactivators are recruited instead. Many of these coactivators posess HAT activity. CoR: corepressor, CoA: coactivator, NR: nuclear receptor, RXR: retinoid X receptor, Ac: acetylation.

The typical homodimerization NRs include the estrogen receptor (ER), the progesterone receptor (PR), the androgen receptor (AR), the glucocorticoid receptor (GR), and the mineralocorticoid receptor (MR). These NRs have relatively large N-terminal domains. In the absence of ligands, they bind to chaperone molecules, such as heat shock protein (HSP) 90 and HSP 70 in the cytosol [12]. In addition, unliganded ER is also localized to the nucleus, but does not bind its target genes [13]. Therefore, these NREs do not directly regulate gene transcription in the unliganded state. Upon binding to the ligands, NRs bind DNA, and stimulate transcription in association with coactivators. The conformational change by the “mousetrap” mechanism [10] is responsible for the interaction with coactivators. In this model, the role of corepressors with HDAC activity is limited.

In addition to these NRs, there are multiple orphan NRs whose ligands are yet to be identified. Whereas some of them activate transcription of the target genes in cooperation with coactivators, others serve as transcriptional repressors by interacting with corepressors.

Although acetylation of histones has been extensively studied, histones are not the only substrates for acetylation and deacetylation. Given the importance of acetylation of non-histone proteins, HDACs have been renamed to lysine deacetylases (KDACs). Similarly, HATs are officially called lysine acetyltransferases (KATs). However, the familiar name “HDAC” will be used in this review.

HDAC3 was implicated in nuclear hormone receptor action by the identification of its core interaction partners. Biochemical purification of HDAC3-associated protein complex revealed that N-CoR and SMRT are the members of the HDAC3 core complex [25][26]. Reciprocally, N-CoR and SMRT form a stable complex with HDAC3, but not with other HDACs [26][27][28][29]. These findings indicate that HDAC3 is the main HDAC responsible for the ligand-independent repression by NRs, because both N-CoR and SMRT are the major mediators of repression. These corepressors tether HDAC3 to transcriptional repressors like unliganded NRs. Moreover, interaction with N-CoR/SMRT substantially potentiates the enzymatic activity of HDAC3 [30]. Additional HDAC3 core complex members include transducin beta-like 1 X-linked (TBL1X), TBL1X receptor 1 (TBL1XR1), and G protein pathway suppressor 2 (GPS-2). These molecules also play important roles in the functions of corepressor complex [31].

As mentioned above, a heterodimeric group of NRs, including TR, RAR, and VDR, is associated with N-CoR/SMRT complexes that contain HDAC3 and suppress the transcription of the target genes in the absence of ligand. On the other hand, the unliganded homodimerization NRs, including ER, PR, GR, MR, and AR, are “neutral” in terms of gene expression because they do not bind their target genes. The findings showing the importance of ligand-independent repression include its role in phenotypic expression of TR-knockout mice and hypothyroid mice. The defects are much more severe in hypothyroid mice than in TR-deficient mice, indicating the roles of unliganded TR [32]. As a core deacetylase component of N-CoR/SMRT complex, HDAC3 plays a critical role in ligand-independent repression by deacetylating histone tails (Figure 2).

RARα is involved in the etiology of acute promyelocytic leukemia. The majority of cases is caused by chromosomal translocations that produce promyelocytic leukemia (PML)-RAR alpha (RARA) fusion protein [33]. PML-RARA  competes with RAR in a dominant-negative manner and suppresses the transcription of retinoic acid-dependent differentiation genes. The PML-RARA protein is associated with N-CoR/SMRT complex, and HDAC3 is involved in the gene repression as the main HDAC [34]. Treatment with supraphysiological doses of retinoic acid dissociates N-CoR/SMRT-HDAC3 complex from the fusion protein and induces gene expression and differentiation of the tumor cells.

Gene expression is suppressed by several orphan NR, whose ligands have not yet been identified. These NRs work as monomers, homodimers, or heterodimers with RXR or other NRs. The typical molecular mechanism is similar to ligand-independent repression, where N-CoR/SMRT-HDAC3 complex plays a pivotal role. The critical involvement of HDAC3 has been extensively studied for an orphan NR, REV-ERBα, which plays a central role in circadian rhythm by repressing core clock genes [35].

As mentioned above, a homodimeric group of NRs does not regulate transcription in the absence of ligand, and stimulates transcription by the addition of ligands. The HDAC3 complex is not involved in that model. However, some antagonists for NRs induce gene repression. HDAC3 in the N-CoR/SMRT complex is involved in transcriptional repression induced by a modulators of ER, tamoxifen [36] (Figure 3). 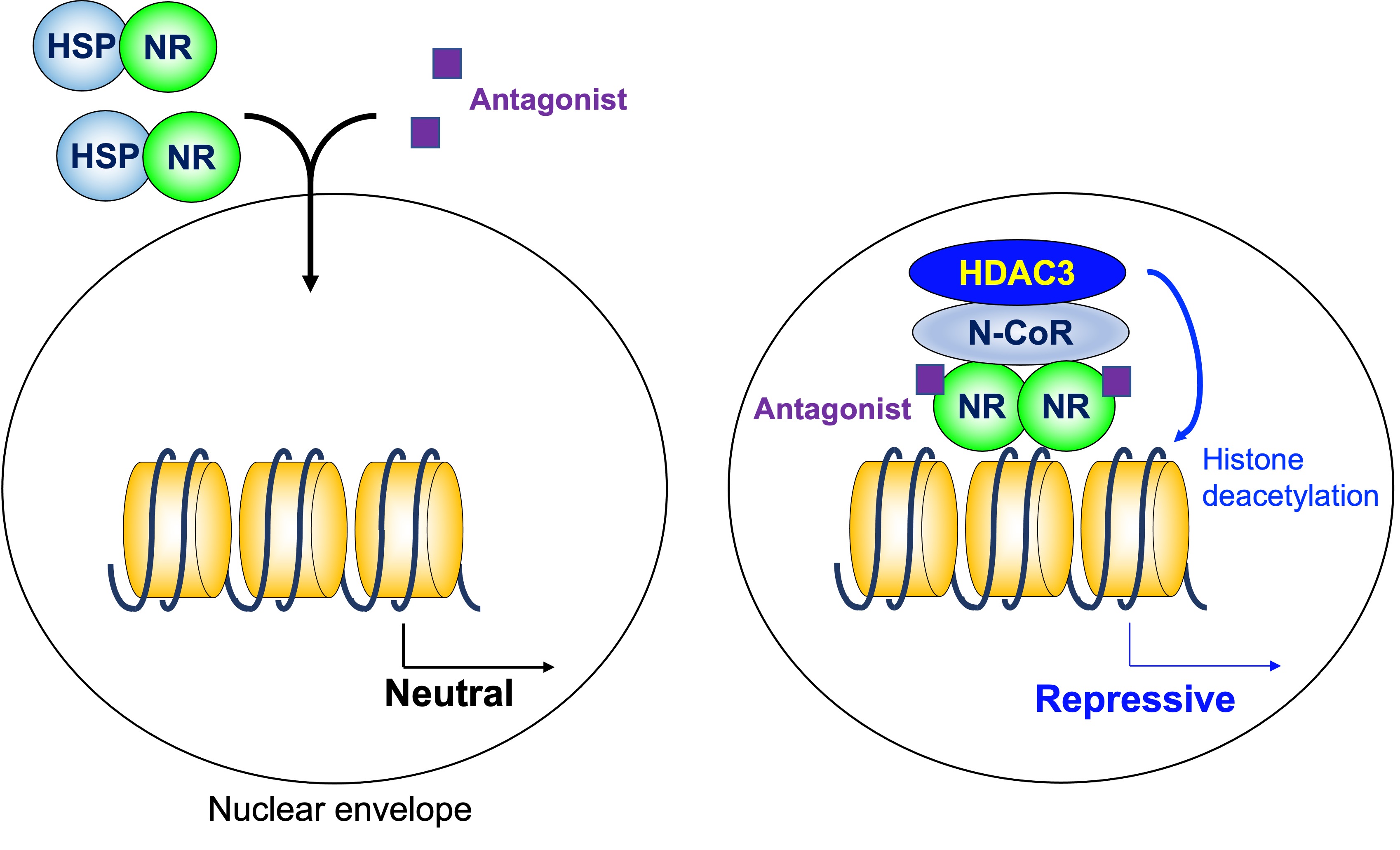 Although histone deacetylation is highly associated with gene repression, there are several genes activated by HDAC3 via NRs. At least some cases are explained by deacetylation of non-histone proteins. One convincing example is the role of HDAC3 in transcriptional stimulation in brown adipose tissue. In this model, the N-CoR/SMRT-HDAC3 complex is tethered to chromatin by the first identified orphan nuclear receptor, estrogen-related receptor­ α (ERRα). Peroxisome proliferator-activated receptor-γ coactivator 1α (PGC1α) is an essential coactivator for ERRα [37], and the function of PGC1α is activated by deacetylation [38]. Emmett et al. reported that HDAC3 stimulates thermogenic gene expression by deacetylating PGC1α [39].

5. Non-Canonical Mechanisms of Histone Deacetylase 3 Action for Other Transcription Factors

Although the responsible transcription factors are unknown or are not NRs, non-canonical mechanisms of HDAC3 action are reported. For example, several functions that are independent of the enzymatic activity of HDAC3 were studied. HDAC3 tethers target genes to the peripheral region of nuclei by interacting with nuclear envelope protein lamina-associated polypeptide 2 [40]. HDAC3 recruits polycomb-repressive complex 2, which possesses histone methyltransferase activity, independently of HDAC activity [41]. These tendencies suggest that non-canonical mechanisms of HDAC3 in NR action will be a hot topic in the near future. In addition, HDAC3 does not localize only in nuclei. It is also identified in the cytoplasm [42]. Therefore, it would not be surprising if cytosolic NR-HDAC3 complex exerts some transcription-independent functions.