Engineering drug delivery systems (DDS) aim to release bioactive cargo to a specific site within the human body safely and efficiently. Hydrogels have been used as delivery matrices in different studies due to their biocompatibility, biodegradability, and versatility in biomedical purposes. Microparticles have also been used as drug delivery systems for similar reasons. The combination of microparticles and hydrogels in a composite system has been the topic of many research works. These composite systems can be injected in loco as DDS. The hydrogel will serve as a barrier to protect the particles and retard the release of any bioactive cargo within the particles. Additionally, these systems allow different release profiles, where different loads can be released sequentially, thus allowing a synergistic treatment. The reported advantages from several studies of these systems can be of great use in biomedicine for the development of more effective DDS.

Drug delivery systems (DDS) can be defined as formulations that protect, transport, and release bioactive cargo, such as drugs or other agents (e.g., growth factors), to the human body. The release needs to be within a specific site and/or with a controllable and sustainable profile. Many types of bioactive agents have a fragile nature and can be rapidly cleared by the body. Their encapsulation within a DDS will protect them in the in vivo environment and prevent rapid clearance. DDS must also guarantee a sustainable release pattern that maintains therapeutic concentrations to the desired site. These systems have been developed for several purposes, particularly for applications in biomedicine [1].

There are different types of administration, such as oral, inhalation, or injection. Different routes can be used for an injection. This can be subcutaneous, intramuscular, intravenous, or intra-arterial [2]. Intravenous administration of pharmaceutical drugs has the downside of rapid clearance and general toxicity; for example, chemotherapeutic treatments are known to cause serious side effects. Many studies have developed DDS that can increase targetability and localized treatment. For example, different mechanisms are used to accumulate nanoparticles (either through active or passive targeting) in the tumour area [3]. To increase the treatment efficiency and reduce systemic toxicity, drugs must be released in situ.
In situ (or in loco) injection of DDS has also been the topic of different studies. Injection of a DDS to a specific site within the human body may offer some advantages. In loco, the system can directly release drugs/bioactive agents to the surrounding tissues without affecting healthy tissues, preventing unwanted cytotoxicity. This localised delivery will also be more effective because the drugs will be unloaded directly to the targeted site, acting more efficiently. This will avoid rapid clearance and the need for repeated administrations. Thus, toxic side effects can be diminished, or even avoided [4]. So, the design of DDS that can be injected and remain in loco is of great importance.
Hydrogels are 3D structures of interconnected chains of hydrophilic polymers, thus being great candidates for in situ injection. Water can penetrate through the hydrogel mesh pores and can be retained in large amounts. Hydrogels are also biocompatible and biodegradable. They also exhibit flexibility similarly to natural tissues, thanks to their water content, which is given by hydrophilic groups [5].
Hydrogel’s crosslinking can either be of physical or chemical nature. Physical cross-linking occurs with secondary forces, for example, hydrogen bonds between chains, hydrophobic interactions, or electrostatic ionic forces. These can be preceded by changes in pH, temperature, or ion presence. Physical crosslinking is reversible and non-toxic because it does not use any toxic chemical crosslinkers. However, mechanical properties are limited by weak bonds. Chemically crosslinked hydrogels have a matrix with covalently bonded chains, created, for example, by photo-crosslinking or Schiff’s base reactions. Chemical crosslinking results in strong bonds that are not reversible and may impact some toxicity to the hydrogel [6].
Hydrogels’ response to exterior stimuli is an important characteristic, especially in the so-called “smart hydrogels”. These react to external stimuli that will cause physical and/or chemical structural changes. For example, hydrogels can contract or swell with different pHs. In a drug loading scenario, these stimuli can be important to the cargo release. By controlling and adapting hydrogels’ characteristics, such as pore structure or crosslinking density, it is possible to control the unloading of bioactive agents from the hydrogel’s structure. Additionally, hydrogels can be injected in vivo and, due to their flexible nature, they will adjust their dimensions to the site. Thus, hydrogels are ideal materials to develop DDS [7].
Microparticles have also been used as DDS [8]. These can carry the cargo within their structure and can be tailored in a multitude of different ways. However, certain considerations must be accounted for; the difference between microsphere and microcapsule must be made (Figure 1). The former consists of a matrix where the drugs are dispersed homogenously. The latter is a shell layer that surrounds a reservoir core, which is where the cargo is held. In the literature, these two names are sometimes confused, and it is important to separate the two since they have different release profiles. Commonly, in microspheres, the permeation of water and the erosion of the polymeric matrix are important factors that will determine the release profile [9]. In microcapsules, the surface layer diffusion determines the release, and its rapid degradation might lead to a rapid release. There are other morphologies of microparticles, but these two are the most common [8]. 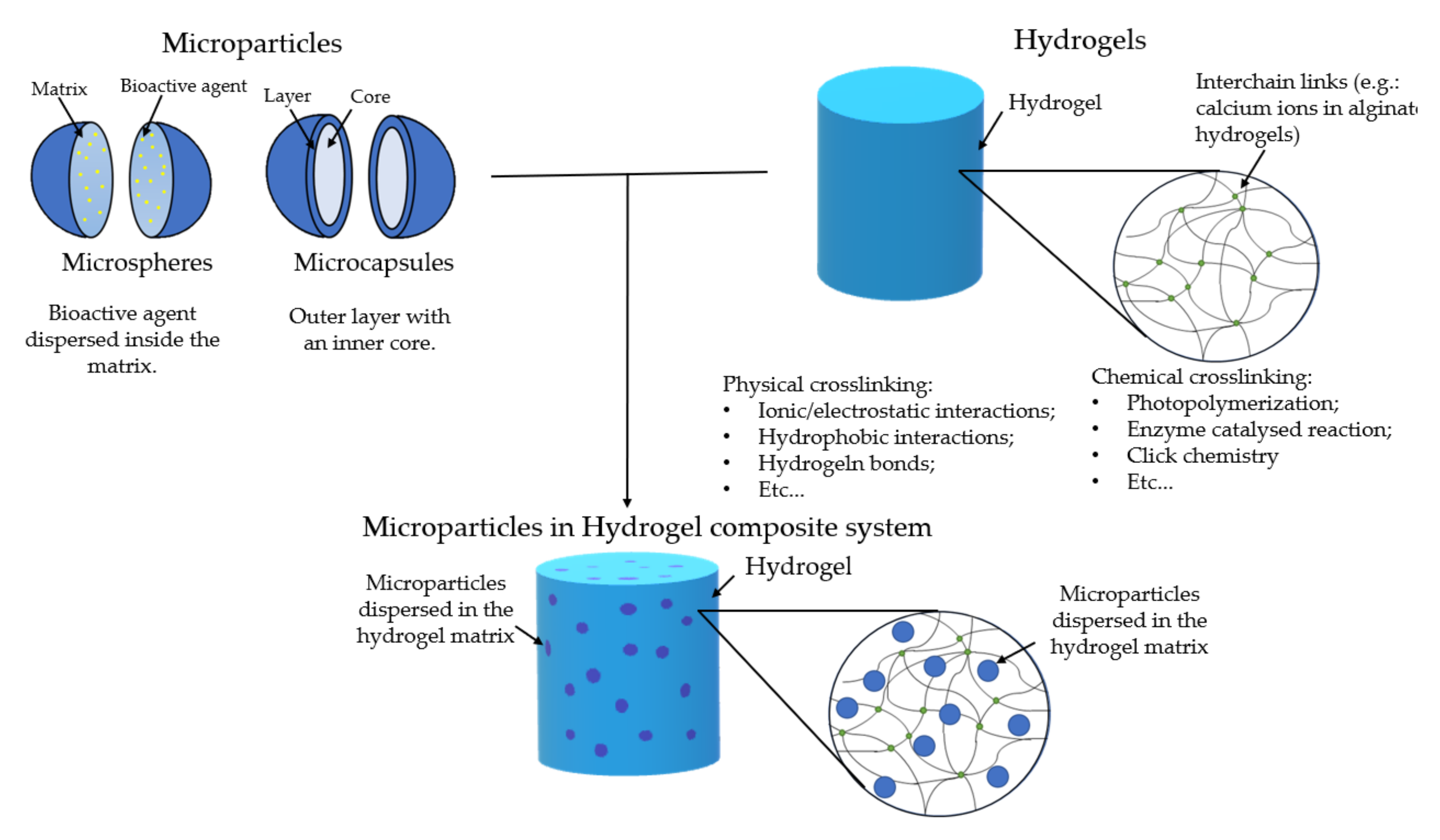 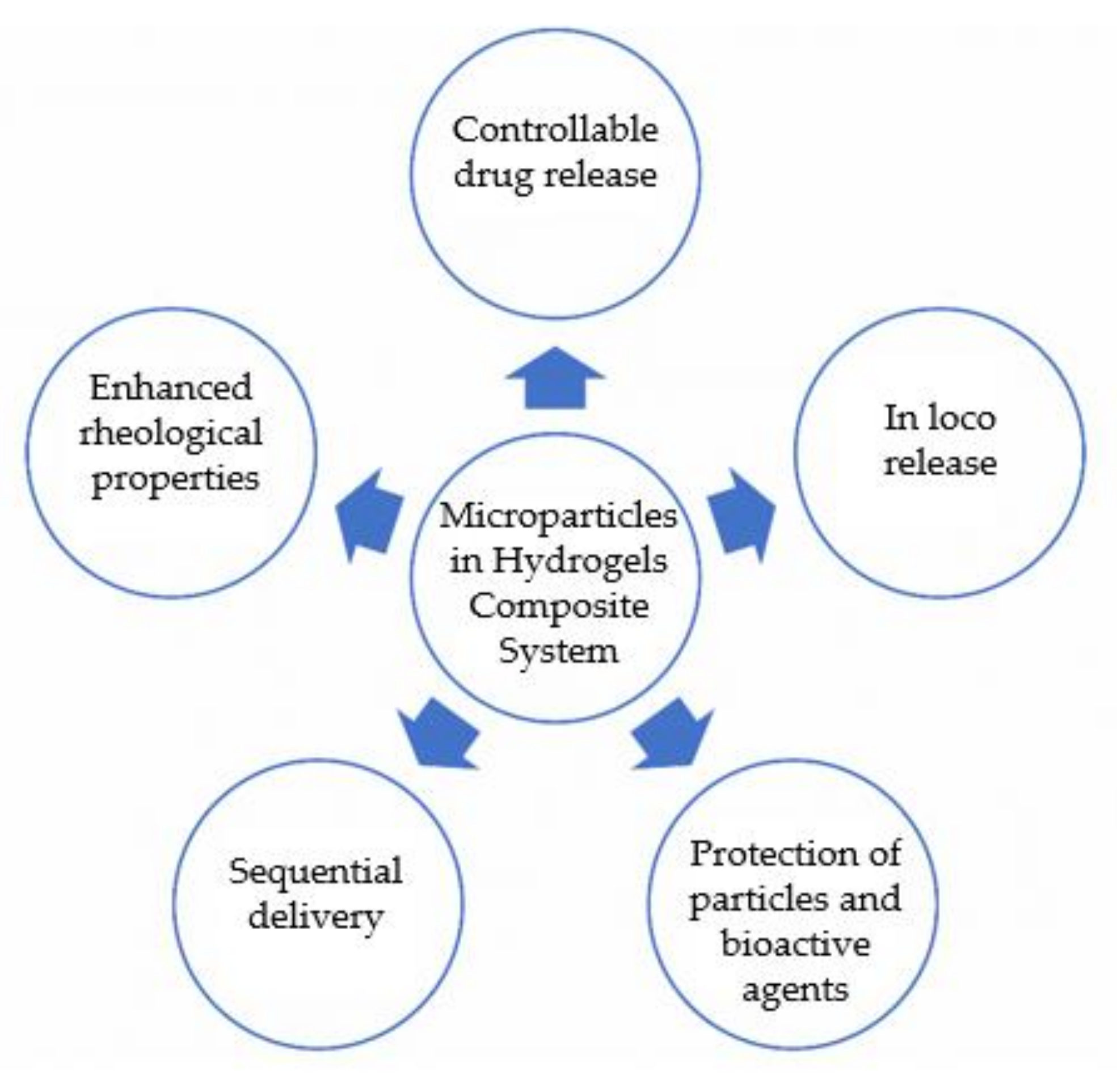 Figure 2. Advantages of microparticles in hydrogel systems for application as DDS.

The microparticles in hydrogel system has been used in different fields of biomedicine. The following chapter will focus on recent studies that used this type of composite system.

Modern medicine has multiple cancer treatments available, including surgery, radiation therapy, immunotherapy, hormonal therapy and, most frequently, chemotherapy. Chemotherapy is the most-used therapy and consists of the application of cytotoxic drugs that can kill cancer cells, examples of which are doxorubicin (DOX), 5-fluorouracil (5FU), methotrexate (MTX) and paclitaxel. Unfortunately, direct application of drugs intravenously spreads these drugs throughout the body, leading to systemic toxicity and adverse side effects on the patient. Moreover, only a fraction of the administered drugs will reach the tumour site, and rapid clearance of the drugs will occur. Thus, to maintain therapeutic levels, higher doses and more administrations are required, exacerbating the problems. For example, chemotherapy is likely to attack hair follicles, leading to hair loss, and damaging blood-forming cells in the bone marrow, leading to anaemia and a weaker immune system, causing the patient to be more prone to other diseases and infections [15]. Furthermore, multi-drug resistance (MDR) is a significant problem in cancer management, with many of the initially responsive tumours developing resistance to multiple anticancer agents, giving rise to relapse [16]. In response to these issues, the composite system discussed here may provide a more controlled and enhanced therapeutic option. The microparticles in hydrogel system will be restrained to the tumorous area, allowing in situ drug delivery (Table 1). With this system, there is no need for high drug concentrations and repeated doses, reducing the side effects of chemotherapy. Moreover, this system can serve as a prevention system; after an operation, the cavity left by the tumour can be filled with this composite system to prevent tumour reoccurrence.
Table 1. Microparticles in hydrogel system used for cancer treatments.

Cardiovascular diseases are the most common causes of death globally, according to the World Health Organization [24]. Among them, myocardial infarction, more commonly known as a heart attack, occurs when areas of the heart are deprived of enough oxygen, generally due to the occlusion of a coronary artery, leading to a very significant cell loss. Developing new treatments that can promote angiogenesis and inhibit inflammatory responses to restore the structure and myocardium functions is critical. The composite system can serve as an excellent system for the treatment of these diseases (Table 2).
Table 2. Microparticles in hydrogel systems for cardiovascular diseases treatment.

Spinal diseases affect our backbone, giving rise to many types of illnesses, from degenerative to traumatic, associated with this vital part of the human body. Microparticles in hydrogel systems have been studied as possible therapeutic tools to deal with those illnesses (Table 3). The composite system can be used as bioactive agent delivery structures and as scaffolds that can promote cell growth and regeneration of damaged tissue.
Table 3. Microparticles in hydrogel systems for spinal cord diseases treatment.

Cartilage is a poorly vascularized tissue and has limited regenerative properties, meaning that cell migration and proliferation to damaged sites for regeneration are limited. Different strategies that focus on cartilage regeneration have been developed to cultivate and deliver cells and/or growth factors to the damaged areas that can then proliferate and differentiate to chondrocytes [36][37]. Microparticles in hydrogel systems can be an option to deliver cells, with Hydrogels offering a good proliferation structure and microparticles delivering the bioactive agents that can promote cell proliferation and chondrogenesis for cartilage regeneration (Table 4).
Table 4. Microparticles in hydrogel systems for cartilage defects treatment.

Bone tissue engineering aims to promote natural bone regeneration. The delivery of bioactive agents that can promote bone formation is an extremely important research area. Microparticles in hydrogels systems have been used as a DDS of these agents for bone therapy, and herein some recent works are presented (Table 5).
Table 5. Microparticles in hydrogel system for bone diseases treatment.

As previously stated, wound healing is divided into four stages. After the trauma happens, the first phase is the haemostasis stage. This consists of blood vessel constriction and the promotion of platelet action to control bleeding. The inflammatory phase occurs after trauma and aims to clean the wound and eliminate foreign agents (bacteria, viruses, etc.). Thirdly, new tissue begins to be built with granulation tissue and angiogenesis at the proliferative stage. Lastly, the maturation stage evolves wound contraction through the action of myofibroblasts and reinforcement of the structure. Collagen type III will be replaced with collagen type I, the main component of the dermis. The composite systems can be injected into the damaged areas to accelerate the occurrences at each stage. Additionally, the hydrogel would adapt to the damaged area, providing a scaffold for more rapid wound closure [54] (Table 6).
Table 6. Microparticles in hydrogel system for skin treatment.

The microparticles in hydrogel system is an ideal DDS that allows a more controlled release of bioactive agents and can be used in many different fields in biomedicine. This combination of microparticles with hydrogels might seem a relatively straightforward process; however, it creates a multipurpose system. It will be more durable when compared with microparticles or hydrogels alone, permitting more prolonged releases. Thus, it is important to determine the complete biodegradability of the system and its components. Additionally, different release patterns of bioactive agents are possible with this combination, allowing more complex treatments. The addition of microparticles will change the hydrogel matrix’s properties, such as the decrease in the gelation temperature in thermoresponsive hydrogels. Of course, the stability of the system is an important goal to achieve, and it is important to optimize and adjust the system to the desired treatment. In sum, the injectable microparticles in hydrogel system is an ideal DDS that can be developed to serve different purposes within the human body.