Open MHC-I conformers are mature fully glycosylated plasma membrane molecules (HLA-A, HLA-B, HLA-C, HLA-E, HLA-G, HLA-E, and CD1d in humans; H-2D, H-2L, and H-2K in mice) that have dissociated from the β2m light chain and the peptide. Given the flexibility and mobility of the α1 domain of the heavy chain, the open MHC-I conformers are free to interact with any nearby complementary amino acid sequences or peptides in a covalent and a non-covalent manner. Open MHC-I conformers are functional cis-trans structures capable of establishing physical cis-associations with themselves (i.e., homodimers), with other surface receptors (i.e., heterodimers), and shed into the extracellular milieu (i.e., soluble open conformers). In turn, the open conformers and the homodimers trans-interact with several receptors expressed by lymphomyeloid cells. Overall, the open MHC-I conformers impact cellular physiology and clinical and biomedical settings, including autoimmune responses, tumor escape, graft rejection, and neuronal development and cognition.

Major Histocompatibility Complex class I (MHC-I) molecules (HLA-I in humans; H-2 class I in mice) were initially identified as antigens involved in tissue rejection in mice and transfusion-related comorbidities in humans and, hence, called transplantation antigens [1]. MHC-I molecules present at the cell surface are structures formed by an integral heavy chain (αHC), non-covalently associated with a light chain (β2m), and a small peptide. The extracellular part of the αHC is organized into three domains: α1, α2, and α3. The α1 and α2 domains are highly polymorphic and form a groove where the peptide binds [2]. Before being expressed at the plasma membrane, the three components of the MHC-I molecules assemble in the endoplasmic reticulum (ER) through a series of complex processes [3]. In the ER, upon binding β2m and the peptide, the αHC folds into a closed/stabilized conformation [4]. Accordingly, the trimeric MHC-I molecules present at the cell surface are designated closed MHC-I conformers [5]. Their primary function is immunological, namely to present peptides to CD8+ T cells and trans-interact with NK receptors [6][7]. Figure 1 illustrates the typical structure of a cell surface closed MHC-I conformer. 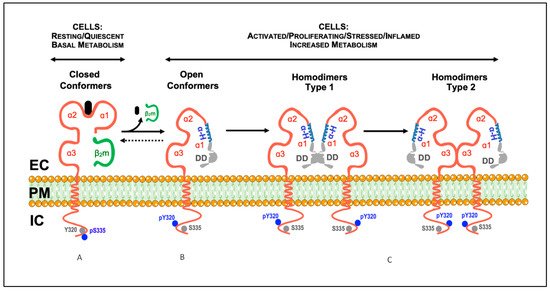 Figure 1. Model illustrating the described conformational states and cis-associations of cell surface MHC-I molecules. (A) Classical MHC-I molecules are trimeric composites of a transmembrane heavy chain (αHC) organized into three domains (α1, α2, and α3), non-covalently associated with a light chain (β2m) and a small peptide (A). These trimeric structures are differentially expressed at the plasma membrane of nucleated cells, and are also designated as closed conformers [5]. The cytoplasmic domain of the αHC of closed conformers contains two conserved motifs: (1) a tyrosine residue at position 320 in all HLA-A and HLA-B alleles that appears to be de-phosphorylated in resting cells (Tyr320, gray circles); (2) a serine residue at position 335 in all HLA-I alleles that appears to be phosphorylated in vivo (pSer335, blue circles). (B) Upon physiological settings associated with an increased metabolic activity (e.g., activation, proliferation, differentiation, etc.), a fraction of the closed conformers dissociate from the β2m and the peptide and generate free αHC, also known as open conformers. As a result, a physiological equilibrium exists where the closed/open conformers' ratio decreases or increases depending on the metabolic state of the cell. Contrary to closed conformers, the cytoplasmic domain of the open conformers is serine de-phosphorylated (Ser335, gray circles) and tyrosine phosphorylated (pTyr320, blue circles). The phosphorylation status may allow membrane movement, localization and trafficking αHC [5]. Thus, based on the current knowledge, pSer335 and pTyr320 may be considered as surrogate biomarkers of closed and open conformers, respectively (see [8][9][10][11][12][13][14][15], and text). (C) The open conformers formed at the plasma membrane of metabolically active cells may self cis-associate originating αHC homodimers, or hetero cis-associate originating αHC heterodimers (not shown). While some of these homodimers are non-covalently associated (see text), others are the result of the formation of disulfide bonds between unpaired cysteines located along the sequence of the αHC (see text). Depending on the orientation of the cis-association, two different homodimers may eventually form, type 1 and type 2. In this model, type 1 homodimers will preferentially be involved in trans-interactions with KIR and LILR receptors [5]. In contrast, type 2 homodimers, due to the flexibility of the α1 domain, namely the polymorphic and ordered α-helix (α-H, in blue), will favor cis-associations with nearby immune and non-immune receptors, such as CD8αβ and the insulin receptor (see text). DD, disordered domain (in gray); EC, extracellular milieu; PM, plasma membrane; IC, intracellular milieu.

Cell surface open MHC-I conformers are novel structures expressed by metabolically active cells over periods of time. During these, they may fine-tune critical physiological processes, both immunological and non-immunological. These include trans-activation of NK and T cells, antigen cross-presentation by dendritic cells, regulation of receptor-mediated internalization, membrane mobility and intracellular signaling, and antibody production, among others [16]. Noteworthy, the physiological functions of the open MHC-I conformers expressed at the plasma membrane of metabolically active cells ultimately depend on the fate of the αHCs. Nowadays, three major fates can be envisaged for the αHCs. First, to self cis-associate and form αHC homodimers (Figure 1). These are novel cell surface receptors able to trans-interact with inhibitory and activating receptors, suppressing or boosting immune responses [17]. The presence of open MHC-I conformers and αHC homodimers at the plasma membrane have important implications for normal and pathological immune responses [16]. Second, to cis-associate with other surface receptors and form αHC heterodimers [5][16]. These are novel cell surface compounds whose formation allows the αHCs to fine-tune receptor-mediated signaling and endocytosis [18]. Cell surface αHC heterodimers may strongly influence tumor cell evasion, neuronal function, and plasticity [19][20][21]. Third, to be shed directly from the plasma membrane, or after internalization, as soluble open αHC conformers [16]. Soluble open αHC conformers are novel circulating molecules capable of trans-interact with other receptors, inducing immunosuppression and regulating neuronal growth [22][23]. They also cause the formation of open conformer-specific antibodies. These antibodies are endowed with immunosuppressive bioactivities and have implications in graft rejection [24].

It is becoming increasingly clear that the main physiological functions of cell surface αHC homodimers are related to the regulation of innate and adaptive immune responses. These responses occur at a systemic level and are easily measurable. In marked contrast, the physiological functions of cell surface αHC heterodimers are non-immunological and related to the biology of the cell. These responses occur at the plasma membrane of metabolically active cells, and the outcomes are more challenging to measure. In this regard, recent studies in cancer, transplantation, and neurobiology unveil the importance of the open αHC conformers. These studies show the formation of open αHC conformer-specific antibodies endowed with immunosuppressive properties and the generation of hetero-associations with receptors involved in the regulation of cell metabolism [24][25][26][27], thus warranting further investigations.

Notably, the exquisite molecular and functional features held by the αHC are shared by all human HLA-I alleles, classical (HLA-A, HLA-B, HLA-C) and non-classical (HLA-E, HLA-F, HLA-G, CD1d, and HFE). Thus, both trans-interactions with inhibitory and activating immunoreceptors, and cis–interactions with receptors for hormones, growth factors, and other signaling molecules, have critical physiological implications for cell growth, proliferation, survival, and differentiation under normal or diseased settings. Among these, the metabolic disorder type 2 diabetes is at the crossroads between the biology of MHC-I molecules and the regulation of insulin receptor signaling, thus deserving special attention.