Cancer is a multifactorial disease responsible for millions of deaths worldwide. It has a strong genetic background, as mutations in oncogenes or tumor suppressor genes contribute to the initiation of cancer development. Integrin signaling as well as the signaling pathway of Ras oncogene, have been long implicated both in carcinogenesis and disease progression. Moreover, they have been involved in the promotion of metastasis, which accounts for the majority of cancer-related deaths. Ras Suppressor-1 (RSU1) was identified as a suppressor of Ras-induced transformation and was shown to localize to cell-extracellular matrix adhesions. Recent findings indicate that its expression is elevated in various cancer types, while its role in regulating metastasis-related cellular processes remains largely unknown. Interestingly, there is no in vivo work in the field to date, and thus, all relevant knowledge stems from in vitro studies.

Although the involvement of Ras proteins as GTPases in cancer progression through intracellular signaling transmission and actin remodeling has been well-established [1][2], and RSU1 was first characterized as a Ras-mediated oncogenic transformation suppressor, the exact role of RSU1 in cancer is still vague [3]. Interestingly, while several studies have been performed in vitro using various cancer cell lines, an in vivo investigation of the role of RSU1 in cancer is still missing.

With regard to breast cancer, a study performed in 2000 by Vasaturo et al. [4] showed that overexpression of RSU1 in MCF-7 breast cancer cells induced p21 activation and reduced cancer cell proliferation through inhibition of Cyclin-dependent kinase (CDK), proposing that RSU1 acts as a tumor suppressor. A more recent study, performed in breast cancer cell lines showed that RSU1 is upregulated in more aggressive and highly invasive MDA-MB-231 breast cancer cells compared to the non-aggressive MCF-7 breast cancer cells, both at the mRNA and protein level, which indicates a deregulation in RSU1 expression in the more cancerous cell line, perhaps as a compensatory mechanism to reduce cell proliferation rate. Interestingly though, when RSU1 was silenced, PINCH-1 expression was upregulated and cell proliferation was enhanced through the inhibition of p53 and upregulation of a regulator of apoptosis, namely p53 Up-regulated Modulator of Apoptosis (PUMA) [5]. Interestingly, these results were further validated in 32 human breast cancer samples with or without metastasis to the lymph nodes having respective normal adjacent tissues as controls. RSU1 was found to be dramatically and significantly elevated in metastatic breast cancer samples compared to non-metastatic and compared to the normal adjacent tissues and, in fact, its expression was shown to be negatively correlated with PINCH-1 expression and positively with PUMA expression [5].

Since all relevant in vitro studies were performed in two-dimensional (2D) culture systems, in which, by definition, cell-matrix interactions are not taken into account, a recent study developed three-dimensional (3D) culture models to better study the role of RSU1 in a more physiologically relevant manner. In that regard, breast cancer cells were either grown inside a 3D collagen gel of tunable stiffness (by adjusting the collagen concentration) or were left to form tumor spheroids and were then embedded in 3D collagen gels in an attempt to investigate cancer cell invasion [6][7]. It was shown that RSU1 was significantly upregulated in increased stiffness conditions, while its silencing diminished the invasive capacity of tumor spheroids through collagen gels. In fact, this was mediated by urokinase Plasminogen Activator (uPA) and Matrix metalloproteinase 13 (MMP13) [7].

Interestingly, regarding the alternatively-spliced RSU1 isoform (RSU1-X1), it was shown to be expressed in human gliomas [12]. Depletion of this isoform from breast cancer cells has been also found to inhibit their migration, while inhibitor studies revealed that the MEK-ERK pathway regulates its expression [13]. This RSU-X1 isoform was also observed to be present in highly invasive MDA-MB-231 and MDA-MB-231-Lung Metastasis-2 (MDA-MB-231-LM2) breast cancer cells, but not in the less invasive MCF-7 cells [7]. In addition, a recent study [6], investigating the involvement of RSU1 isoforms in cancer cell metastasis, utilized shRNA-mediated silencing to generate breast cancer cell lines that permanently lacked RSU1. RSU1 depletion in the two cell lines had completely opposite effects on cell migration, cell invasion and tumor spheroid invasion in 3D collagen gels. While RSU1 depletion from MCF-7 cells resulted in an impressive and complete abrogation of cell migration, cell invasion and tumor spheroid invasion, its depletion from MDA-MB-231-LM2 cells dramatically promoted all three pro-metastatic properties. At the same time, the shorter RSU1-X1 isoform was upregulated, perhaps as a compensatory mechanism for the loss of RSU1. Remarkably, when the truncated RSU1-X1 was also eliminated in the cells that were permanently lacking RSU1, RSU1-depletion-induced cell migration and invasion were significantly inhibited along with a concurrent reduction in uPA expression [6].

Furthermore, a connection between RSU1 and miR-409-5p has also been made, as RSU1 was confirmed to be directly targeted by this miRNA in breast cancer cell lines MCF-7 and MDA-MB-231. Specifically, in cells that had been previously treated with a lentivirus that inhibited miR-409-5p, siRNA-mediated silencing of RSU1 promoted cancer cell proliferation and migration, indicating that the regulatory effect of miR-409-5p inhibition in breast cancer is achieved through the inverse upregulation of RSU1 [14].

In conclusion, studies in breast cancer cells clearly show that both RSU1 isoforms promote breast cancer cell migration and invasion in vitro but there is also a mechanism in place by which the truncated RSU1-X1 isoform acts as a back-up for performing the functions of RSU1 when the latter is lost. Hence, ideally both isoforms should be blocked to effectively abolish the invasive and migratory potential of breast cancer cells (Figure 1). 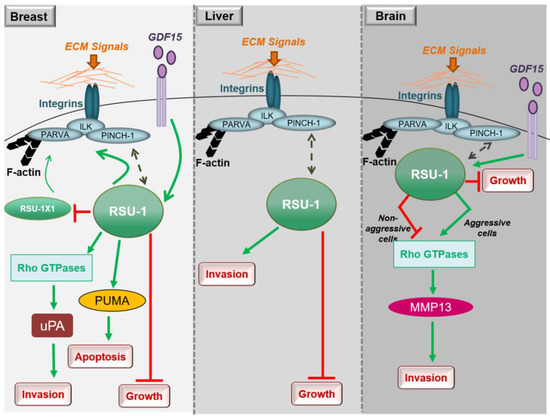 Figure 1. Diagrammatic representation of the role of RSU1 with regard to the cancer-related properties of breast, liver and brain cancer cells.

Little is known regarding the role of RSU1 in hepatocellular carcinoma, with the thus far available data being in agreement with what has been shown in breast cancer. More specifically, RSU1 expression was found to be dramatically elevated in more aggressive HepG2 hepatocellular carcinoma cells compared to the non-metastatic Alexander cells and its elimination promoted cell proliferation [15]. In addition, Hepatitis C virus infection was shown to upregulate RSU1 expression promoting a cancerous phenotype [16]. Moreover, Donthamsetty et al. [17] also showed that elimination of PINCH-1 in mouse hepatocytes resulted in reduced RSU1 expression, which in turn led to increased hepatocyte proliferation. The tumor suppressor role of RSU1 is further corroborated by the fact that RSU1 is frequently deleted in hepatocellular carcinomas [18]. Finally, with regard to liver cancer cell invasion and similarly to breast cancer cells (Figure 1), depletion of the RSU1 from aggressive hepatocellular carcinoma cells leads to significantly impaired cell invasion [15].

As RSU1 has been previously linked to basic functions of the CNS [19][20], it is not surprising that it is also involved in the pathogenesis of glioblastoma, the most aggressive type of brain cancer [12][21][22]. Transient overexpression of RSU1 in U251 glioblastoma cells that express low levels of RSU1 reduced their growth rate in vivo and reduced aggressive cell behavior, again indicating that RSU1 likely acts as a tumor-suppressor gene [23]. However, no information was available on the role of RSU1 on basic metastasis-related properties, such as cell migration and invasion, until recently.

A recent study explored the role of RSU1 in a panel of brain tumor cell lines and clearly showed that the more aggressive brain cells (A172 and U87-MG) exhibited dramatically increased expression of RSU1 both at the mRNA and protein level in contrast to the less aggressive brain cell lines (H4 and SW1088), which express the gene at minimal levels. Interestingly, RSU1 was shown to behave differently in the various brain cell lines with regard to in vitro cell migration and invasion and did not show the uniform pattern seen in breast cancer cells, where RSU1 promoted the in vitro metastatic properties of cells. On the contrary, RSU-1 silencing was shown to inhibit migration and invasion of aggressive cells and promote those of less aggressive cells [21], indicating that RSU1 promotes the invasion capacity of aggressive glioma cells A172 and U87-MG that express high levels of RSU1. This was achieved through activation of Signal Transducer and Activator of Transcription (STAT6) and MMP-13, while the inhibition of cell invasion in less aggressive H4 and SW1088 glioma cells, which express RSU1 in low levels, was also observed to take place through negative regulation of STAT6 and MMP13 [21].

Thus, RSU1 apparently has distinct roles with regard to glioblastoma cell invasion depending on the cells’ aggressiveness as well as based on its expression level in the specific cells (Figure 1). In more aggressive glioma cells in which RSU1 is elevated, cell invasion is promoted, while in less aggressive cells with low RSU1 expression, it is inhibited [21]. The molecular mechanism by which this is achieved is not yet defined, but it is in accordance with other focal adhesion proteins whose level is also associated with cell migration capacity [24]. It is also reminiscent of the TGF-β [25] and GDF15 [26] mechanisms of action, which are known to act as tumor suppressors during early stages of the disease and as oncogenes at later stages. In fact, it was recently shown that the link between RSU1 and GDF15 is active in brain cells similarly to what happens in breast cancer cells, in regulating cell aggressiveness [27], as GDF15 is known to be associated with cancer cell malignancy and is elevated in glioblastoma patients [28]. Furthermore, the correlation of the expression levels of GDF15 and RSU1 determines the aggressiveness of brain cells through the regulation of RhoA, PINCH-1 and MMP13 [27], providing the basis for future investigations towards deciphering the molecular mechanism of RSU1 action.

A summary of existing studies on the role of RSU1 in cancer development and progression is presented in Table 1 below.

Table 1. Summary of studies on the role of RSU1 in cancer.

Although there is a lack of in vivo work related to RSU1 function, there is significant evidence from clinical samples corroborating the in vitro findings. Specifically, analysis of Kaplan-Meier survival plots from human breast cancer patients revealed that high RSU1 expression is associated with poor prognosis for distant metastasis-free survival and remission-free survival [4][7]. Furthermore, protein expression analysis data from 23 human breast cancer samples showed that RSU1 is elevated in metastatic breast cancer cells, while the levels of the truncated isoform, RSU1-X1, are significantly reduced [6]. This is also in accordance with in vitro data in breast cancer cells lines, where more metastatic cell lines express RSU1 at higher levels [5][6], and further supports the hypothesis that RSU1 promotes a metastatic phenotype.

Regarding brain cancer, the first report on the involvement of RSU1 in glioblastoma was made as early as in 1995, showing that the RSU1 gene is frequently deleted in high-grade gliomas [23], but no other evidence is available in human samples thus far.