Liver cancer is among the leading global healthcare issues associated with high morbidity and mortality. Liver cancer consists of hepatocellular carcinoma (HCC), cholangiocarcinoma (CCA), hepatoblastoma (HB), and several other rare tumors. Progression has been witnessed in understanding the interactions between etiological as well as environmental factors and the host in the development of liver cancers. However, the pathogenesis remains poorly understood, hampering the design of rational strategies aiding in preventing liver cancers. Accumulating evidence demonstrates that aberrant activation of the Wnt/β-catenin signaling pathway plays an important role in the initiation and progression of HCC, CCA, and HB. Targeting Wnt/β-catenin signaling potentiates a novel avenue for liver cancer treatment, which may benefit from the development of numerous small-molecule inhibitors and biologic agents in this field.

Liver cancer is among the leading global healthcare issues associated with high morbidity and mortality. Primary liver cancers consist of hepatocellular carcinoma (HCC), cholangiocarcinoma (CCA), and hepatoblastoma (HB). Other rare tumors are fibrolamellar carcinoma, hepatocellular adenoma, focal nodular hyperplasia, fibrosarcoma, angiosarcoma, leiomyosarcoma, and lymphoma.
HCC is the fifth most frequent cancer worldwide and is closely associated with cancer-related deaths [1]. HCC accounts for around 90% of liver cancer patients. The etiological factors for HCC include hepatitis B (HBV), hepatitis C (HCV) viruses, alcohol abuse, obesity-induced non-alcoholic steatohepatitis (NASH), as well as aflatoxin-B1 exposure. Most HCCs start with chronic hepatitis caused by the above etiological factors, which gives rise to fibrosis and progresses to cirrhosis around 10 years later [1].
CCA is the second most common liver cancer following HCC. CCA is a devastating malignancy with a dismal 5-year overall survival rate of less than 10%. Based on the anatomic location, CCAs are classified into intrahepatic (iCCA), perihilar (pCCA), and distal (dCCA) subtypes. iCCA associates better with cirrhosis resulting from HCV than HBV infection. pCCA is closely related to primary sclerosing cholangitis marked by chronic inflammation [2].
HB is the most common pediatric liver malignancy and stems from hepatic progenitor cells that undergo malignant transformation during embryogenesis [3]. Although surgery along with chemotherapy has largely improved prognosis, around one quarter of the patients die of the disease. Compared to the general population, the risk of HB is 750–7500 times higher in children predisposed to familial adenomatous polyposis (FAP) [4].
With the exception of HBs, most liver cancers take decades to facilitate the progression from the precancerous dysplasia of liver cells located in a chronic inflammatory microenvironment towards a malignant phenotype. During this process, the accumulation of aberrant genetic and epigenetic modifications leads to the dysregulation of signaling pathways, which in turn promote the initiation and progression of liver cancers.
Aberrantly activated Wnt/β-catenin signaling plays a critical role in precancerous dysplasia as well as the malignant transformation of liver cells and malignant expansion of cancer cells. Here, we summarize the latest advances in our understanding of Wnt/β-catenin signaling in the course of liver cancer development and highlight the clinical implications of Wnt/β-catenin signaling pathway as a rational therapeutic target.

The Wnt/β-catenin signaling pathway is evolutionarily conserved and required in both physiological and pathophysiological processes [5][6][7]. The association of Wnt ligands to corresponding receptors triggers the Wnt/β-catenin signaling pathway. These ligands are generated within the endoplasmic reticulum (ER), which undergoes palmitoylation by the Wnt acyl-transferase porcupine (PORCN). Next, Wntless (WLS) shuttles the palmitoylated ligands from the Golgi to the cell membrane, where they can signal in an autocrine or paracrine manner [8].
Wnt/β-catenin signaling is inactive in the normal tissues of adults, except for some stem cell niches [9]. This is achieved through a balanced regulation through Wnt ligands and the β-catenin destruction complex. Wnt antagonists, including secreted frizzled-related proteins (SFRPs), dickkopfs (DKKs), and the Wnt inhibitory factor (WIF) capturing Wnt ligands, as well as Kallistatin binding to the low-density lipoprotein receptor-related protein 6 (LRP6) inhibit the combination of Wnt ligands and receptors [10][11]. The central component β-catenin is tightly regulated by the destruction complex, which is composed of scaffold proteins AXIN1 and AXIN2, adenomatous polyposis coli (APC), and the kinases GSK3 and CK1α. β-catenin is subject to phosphorylation firstly at Ser45 by CK1α, potentiating the subsequent phosphorylation at Thr41, Ser37, and Ser33 by GSK3. Next, the phosphorylated β-catenin is recognized by the β-transducin repeat containing protein (βTRCP), which mediates its ubiquitylation and subsequent proteolysis [10][12].
On the contrary, in the active condition Wnt ligands bind at the cysteine rich domain (CRD) of one of the frizzled (FZD) receptors and one of the LRP5/6 co-receptors. Next, the interaction between Wnt ligands and receptors recruits scaffolding proteins disheveled (DVL) and AXIN to the membrane. The AXIN proteins themselves are also under proteolytic control and are rapidly degraded following poly-ADP-ribosylation (PAR) by tankyrase (TNKS) enzymes [13][14]. The sequestration and degradation of AXIN result in the disassembly of the β-catenin destruction complex [15] and subsequent accumulation of unphosphorylated β-catenin in the cytoplasm, which acquires the ability to escape ubiquitylation and proteolysis. This allows active β-catenin to translocate to the nucleus [16], where it binds to transcription factors of the T-cell factor/lymphoid enhancer-binding factor (TCF/LEF) family with recruitment of co-activators (BCL9, CBP/300, Pygo, and others) to turn on the transcription of downstream target genes [17] (Figure 1). 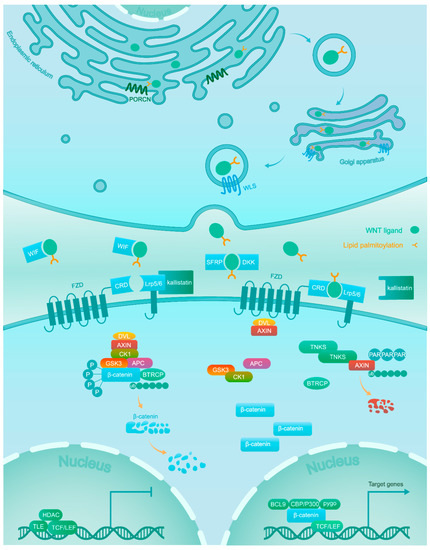 Figure 1. Wnts are lipid-modified by PORCN in the ER and escorted by WLS from the Golgi to the plasma membrane for secretion. In the absence of Wnt ligands due to Wnt antagonists (WIF, DKK, and SFRP) and Kallistatin, β-catenin is phosphorylated by a destruction complex consisting of GSK3, CK1, APC and AXIN. Phosphorylated β-catenin is targeted for proteasomal degradation after ubiquitination. In the nucleus, the TCF/LEF transcription factor activity is repressed by transducin-like enhancer of split (TLE) and histone deacetylase (HDAC). Association of Wnt ligands with their receptors leads to the dissociation of the destruction complex. As a result, β-catenin accumulates in the cytoplasm and translocates into the nucleus, where it promotes the expression of target genes via interaction with TCF/LEF and co-activators such as CBP/300, BCL9, and Pygo.