Following the 2016 central Italy earthquakes, the high seismic vulnerability of existing buildings is once again at the center of the debate. Indeed, the majority of the Italian building stock (around 60%) was built before adopting the first seismic provisions (1974) and in a territory entirely characterized by medium to high levels of seismic hazard. On the other hand, the first provisions addressing thermal performance criteria were introduced in 1976 but with limited impact. A consistent reduction in energy consumption was further achieved in 1991, when even more buildings were erected. As a consequence, the Italian building stock is characterized by reduced seismic capacity and poor energy efficiency and, to optimize the available resources, combined retrofit interventions approaches are required. In this context, a synergic strategy for the seismic and energy retrofit of a unreinforced masonry (URM) building was proposed. The former Courthouse in Fabriano (Ancona, Marche), a strategic, three-story, unreinforced masonry building in the network of permanent monitoring systems of the Italian Department of Civil Protection, was selected as a case study.

According to ISTAT data (Italian National Institute of Statistic), 60% of the Italian building stock was built before the first seismic regulation (1974), and 88% of the built stock precedes the first important energy provision (1991). In addition, despite the decreased construction of masonry buildings over the years, a large amount of relevant and strategic Italian constructions is made of masonry, and it is very often found in heritage buildings. These masonry buildings, due to their specific features and vulnerabilities, are particularly damage prone in case of seismic actions.
The latest seismic events affecting Italian territory revealed that the poor seismic performance of masonry buildings resulted in high damage and losses (i.e., central Italy, 2016 [1][2], including also the positive effects of preventive actions [3], Emilia 2012 [4][5], L’Aquila 2009 [6][7], Molise 2002 [8][9][10], and Umbria and Marche 1997 [11][12]). The recent seismic risk assessment of residential buildings in Italy also demonstrated the significant economic loss and loss of human lives connected to the performance of existing, and particularly masonry, buildings [13][14].
On the other hand, the low energy performance of the buildings, which increases their energy consumption, makes them responsible for 40% of EU final energy consumption. In this scenario, it is undoubted that the major part of the Italian building stock needs a comprehensive refurbishment in both seismic and energy aspects to achieve adequate requirements.
Until the last decade, seismic and energy retrofitting were considered objectives to be achieved separately. Although different researches concerning seismic retrofitting [15][16][17][18][19][20] or energy retrofitting [21][22][23][24][25][26] are available in the literature, only in the last years have the researchers’ interest focused on the integration of the two fields. Indeed, seismic retrofit does not improve the thermal comfort of the residents, an energy retrofit alone also does not lead to a reduction of seismic vulnerabilities, and the energy retrofit itself may be lost in case of earthquakes. Nevertheless, several barriers limit an extensive application of combined retrofit actions; these barriers concern different aspects [27]: (i) technical barriers (e.g., unfeasibility and/or ineffectiveness of conventional retrofit solutions and the need for regulatory simplification); (ii) financial barriers (e.g., high renovation costs, “split-incentive”/”landlord-tenant dilemma”, and insufficient incentives and subsidies); (iii) organizational barriers (e.g., need for occupants’ and/or activities’ temporary relocation, consensus in case of condominium ownership, excessive time to obtain building permits); (iv) cultural/social barriers (insufficient information and skills and lack of adequate policy measures to promote renovation actions).
To overcome technical barriers, in recent years, researchers investigated new integrated technologies, aiming to enhance seismic and energy performance with a single intervention. A suitable approach for R.C. structure may be the use of exoskeletons or double-skins [28][29][30][31][32]. Other approaches for R.C. buildings involve the enhancement [33][34][35][36] or the replacement of infill walls [37][38][39]. Different methods are now available for masonry structures mostly involving the implementation of multi-layers interventions, combining the seismic-resistant layer (e.g., Textile-Reinforced Mortar TRM, Fiber-Reinforced Cementitious Matrix FRCM, Glass Fiber-Reinforced Polymer GFRP) with the insulation layer (e.g., stone wool panels, sheep wool, EPS) [40][41][42][43][44]. Other methods suitable for both R.C. and masonry structures involve the use of timber-based technologies. In particular, thanks to their features (i.e., high structural strength, thermal insulation, sound absorption, low weight, and ease of assembly), the use of Oriented Strand Board (OSB) and Cross Laminated Timber (CLT) panels as a combined intervention has rapidly spread in the last years [45][46][47][48][49].
To overcome financial barriers, in Italy, a series of fiscal incentives were recently launched in order to promote the implementation of both seismic and energy retrofitting of residential buildings. These incentives are the so-called “Ecobonus” [50] for energy retrofit, “Sismabonus” [51][52][53] for seismic retrofit, and “Superbonus” [54], which increases the incentive value up to 110% of the cost incurred, reducing the citizen’s monetary disbursement to almost zero. To evaluate the economic feasibility, a common strategy involves the use of Economic Annual Loss (EAL) [33][35][55][56][57], also accounting for, in specific cases, for the indirect costs caused by the building and activity disruption due to a possible earthquake [52]. EAL is based on the annual exceedance probability of the earthquake, and it may be used as index to assess the cost-effectiveness of retrofit interventions.
In this context, starting from a case-study, the aim of the paper is to propose a design methodology for combined interventions that implement both seismic and energy retrofit by intervening on the same scale of dimensions and structural elements of the building (vertical structures, horizontal structures, entire building) in order to optimize the intervention procedures and, if possible, reduce the building disruption time. The case study, the former courthouse in Fabriano (Ancona, Marche), has the typical seismic and energy vulnerabilities of masonry structures. The paper discusses the possible interventions, considering their structural/thermal effectiveness alone and the cost-effectiveness of the proposed intervention strategies. Lastly, a parametric analysis to check the effectiveness of the proposed solutions when changing the seismic hazard and energy demand of the building location is also carried out.

2. The Case Study: The Former Courthouse in Fabriano

The case study building (Figure 1) is the former courthouse in Fabriano (Ancona, Marche). The structure presents a “T” plan, and it is isolated from nearby structures except for the east side. It was built around 1940 as a secondary school, and in 1950, an additional floor was added. After the Umbria-Marche earthquakes of 1997, the building was subjected to a series of seismic and energy retrofitting interventions starting from 1999. However, it has been analyzed in the as-built condition before retrofitting to match the project goal.

Figure 1. View of the case study building.
The building is on four levels: three above the ground level and a basement, for a maximum height of 16.8 m. The average floor area is about 1300 m2, for a total volume of about 22,000 m3. The internal distribution is almost the same for each floor, with a long corridor along the main body (Figure 2a). There are two stairs in the building: the original one inside the building in the short wing and an external one built more recently for fire safety reasons. The elevations are simple, with a regular repetition of the openings (Figure 2b). A facing brick cladding characterizes the ground floor and the first floor. The symmetry of the elevations is interrupted only by the new external stairs, easily recognizable thanks to the use of different materials.

Figure 2. (a) Type plan of the building; (b) elevations of the building.
The building is a strategic structure corresponding to the class of use IV in the Italian Building Code [58][59], with a reference period for the seismic actions of 100 years. With the stratigraphic and topographic properties of the site, it is possible to define the seismic parameters for the calculation of the response spectrum as:  TR,SLV=949 years ag/g=0.228, F0=2.513, TC=0.333 s.

The building load-bearing masonry walls are mainly made of regularly cut stone. Walls develop along the entire height of the building, giving a good regularity in elevation to the structure. The wall thickness varies between 80 and 110 cm on the ground floor, whereas at the upper levels, the thickness varies between 30 and 90 cm. It is possible to identify three masonry types (Figure 3 and Figure 4): 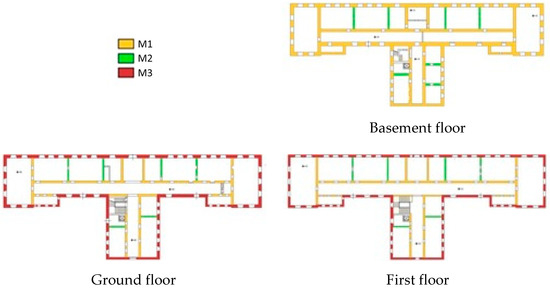 Figure 4. In-plan distribution of masonry types.
The building presents various types of horizontal diaphragms, probably due to the different construction phases (Figure 5). It is possible to identify five floor types: 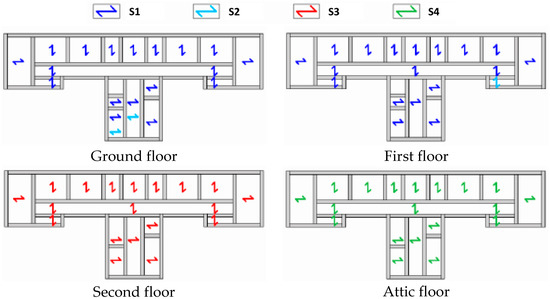 Since the external walls have no insulation, the thermal transmittance ranges between 1.5 and 3 W/m2·K depending on the thickness and type of walls. For the S1–2 and S3 floor types, the thermal transmittance can be assumed between 2.3 and 3.1 W/m2·K. The S4 floor type is made of a wooden plank with a thermal transmittance of 2.7 W/m2·K, while for the roof, it was calculated that the value of thermal transmittance is equal to 0.8 W/m2·K. Thermal transmittances were calculated based on the existing stratigraphy defined during onsite surveys, the properties defined in the standard UNI EN ISO 6946:2008, and from the database given by the tool EDILCLIMA, used in this work for the quasi-steady-state calculations. The fenestration surfaces are single-pane windows with wood frames, with a value of thermal transmittance equal to 5 W/m2·K, as according to the EU project TABULA [60] and verified with national limitations related to standards. The heat-generation system is a traditional gas boiler with 89% of nominal efficiency. The system supplies both the domestic hot water (DHW) and the radiators, operating at an average supply temperature of 70 °C. Considering the typical usage of the building, the intended use has been assumed as an office for all the levels, thus load fractions have been defined for occupancy, lighting, and appliances for office use according to the guidelines of standard BS ISO 18523 [61]. The schedules are derived by the use of the building, and heating (20 °C) and cooling (26 °C) setpoints are based on the real use of the building.