Chlorinated aliphatic hydrocarbons (CAHs) are ubiquitous contaminants whose presence in groundwater has persisted for many decades, mainly due to the physical-chemical characteristics of these compounds. In particular, CAHs belong to Dense Non-Aqueous Phase Liquids (DNAPLs), for which contamination scenarios differ significantly from Light NAPLs scenarios, where the separate phase floats at the top of the water table due to its lower density than water.

Chlorinated aliphatic hydrocarbons (CAHs) are ubiquitous contaminants whose presence in groundwater has persisted for many decades, mainly due to the physical-chemical characteristics of these compounds [1][2]. In particular, CAHs belong to Dense Non-Aqueous Phase Liquids (DNAPLs), for which contamination scenarios differ significantly from Light NAPLs scenarios, where the separate phase floats at the top of the water table due to its lower density than water [3][4].

The two major problems associated with aged CAHs-contaminated sites are the secondary source management and the containment and remediation of the contamination plume. Secondary source refers to the presence of the solvent in a separate phase, primarily accumulated in the low-permeability layers of the aquifer (clay lens), which work as a source of long-term contaminants [5]. On the other hand, contamination plume refers to prolonged contamination in the same direction of water flow due to the slow and steady release of secondary sources. The distribution of contaminants is highly dependent on the hydrogeological characteristics of the site and concentration levels differing greatly from source to source.

Today, in-situ technologies can operate and significantly reduce costs, although detailed site characterization is required. In this context, many improvements have been made in modeling and interpreting the data to support the design and adoption of the right strategy [6]. For the remediation of chlorinated solvents plume, the In-Situ Bioremediation (ISB) technologies are growing attention. The reasons for the success are the public support, success on the dissolved contaminants, and a comparatively low cost when it is effective [7]. If the presence of degradation intermediates is detected during site characterization, the biological Natural Attenuation phenomenon occurs due to the presence of specific microorganisms [8]. For the reductive dechlorination (RD) of widespread contaminants, such as tetrachloroethane (TeCA), perchloroethylene (PCE), and trichloroethylene (TCE), in an anaerobic environment, one of the most widely used approaches is enhanced natural attenuation (ENA) [9][10]. The intervention provides the addition of an organic fermentable substrate to produce short-chain fatty acids (acetate and other volatile fatty acids, VFAs) and the direct electron donor, the molecular hydrogen [11][12]. Therefore, almost any fermentable substrate can be a potential source of carbon and hydrogen to stimulate RD, including carbohydrates (sugars), alcohols, oils, solids (e.g., bark mulch, chitin), and complex compounds (e.g., whey and cellulose) [13]. The RD is a well-known, step-by-step reaction. Focusing on the sequential RD pathway of PCE through TCE, cis-dichloroethyene (cis-DCE), and vinil chloride (VC) to ethene, shown in Figure 1 , the efficiency of each step can be dramatically different depending on the environmental conditions and the microbial populations responsible for the reactions [14][15]. If the specific population has developed in the aquifer ( Dehalococcoides spp.) , the reaction may proceed until ethene production. As with every technology, serious issues may be associated with ISB, and the following situation may seriously affect meeting the remediation goals: Low efficacy on separate phase or highly adsorbed fraction (at source); Substrate availability limitations; and Incomplete degradation pathways (stall at an intermediate stage) for energetic and kinetic constraints with volatile and more toxic by-product accumulation, e.g., VC.

Recently, the combined approach has been investigated to help address the RD limits. Complete management of the site can be achieved more effectively with a combination of physicochemical processes to prompt anaerobic biodegradation [16]. For example, over the last few decades, the feasibility of DNAPLs’ bioremediation, also in the source areas, has been recognized through the combination of ISB with other more aggressive technologies, such as ISCO-R (In-Situ Chemical Oxidation Reduction), thermal treatment, and excavation [17]. In addition, the coupled technology is expected to be more satisfactory than a single-technology approach to deal with site changes and response during the intervention. Compared to individual methods, coupling technologies into sequences, combinations, or treatment trains can be more effective in reducing the contamination level and in the overall duration. As concerning the specific RD reactions, it is well known that the anaerobic condition favors the degradation of the highly chlorinated compounds, whereas aerobic condition favors the oxidation of di- and mono-substituted compounds [14]. For this reason, the sequential combination of technologies that might be considered opposing (reduction/oxidation) may be more effective to avoid VC accumulation.

To gain the remediation of an aged source zone of CAHs, Petrangeli Papini and co-workers (2016) performed a pilot test in Italy in a complex operative industrial site contaminated by different chlorinated solvents (at a concentration up to 100 mg/L) [18][19]. Groundwater circulation wells (GCWs) (30 m deep) were designed to create the groundwater circulation through the treatment zone, both horizontally and vertically, and contemporary amendment addition was realized to enhance the ISB. GCW is a novel approach for effective mobilization of contaminants for the secondary source and to provide optimal conditions for better contact between microbes, contaminants, amendments, and nutrients distribution [20].
Previous characterization of the site and microcosms tests assessed the possibility to significantly enhance the biodegradative potential of natural microbiota with the addition of electron donors [19]. Because of GCW, the low-permeable layer was constantly penetrated by the vertical flow, allowing the mobilization of the residual phase. The extracted water from GCW flowed to the external treatment unit composed of sand and biodegradable polymer (polyhydroxybutyrate, PHB) reactor (where fermentation takes place) and a zero-valent iron (ZVI) reactor before reinjection (Figure 2). In this case, a slow-release electron donor source, the PHB, was also investigated. Results from laboratory tests to pilot-scale demonstrated the efficiency of the coupled strategy, enhancing the mobilization of CAHs and stimulating the biological processes [21]. The mass of contaminants removed during the eight-month monitoring was comparable with a traditional pump-and-treat method, but the overall processing time is still difficult to estimate [18]. Additionally, microbial analysis performed by Matturro and colleagues (2018) reported that the slow-release source of electron donors in the field allowed the establishment of a stable population of Dehalococcoides mccartyi, mainly carrying bvcA and vcrA genes (encoding for the reductive dehalogenase BvcA and VcrA, respectively), which are essential to complete the RD steps to harmless ethene [22][23]. As reported by O’Connor et al. (2018) the interest in Controlled Release Materials (CRM) is increased in the environmental remediation field [24]; hence, PHB can be included in these materials as a controlled H2-release. Aulenta et al. (2008) and Baric and coauthors (2012) already studied and investigated the fermentability of this bio-polymer and its possible use for enhancing the performance of ZVI towards chlorinated ethane, increasing iron reactivity and longevity, and enhancing biological reductive processes [25][26]. 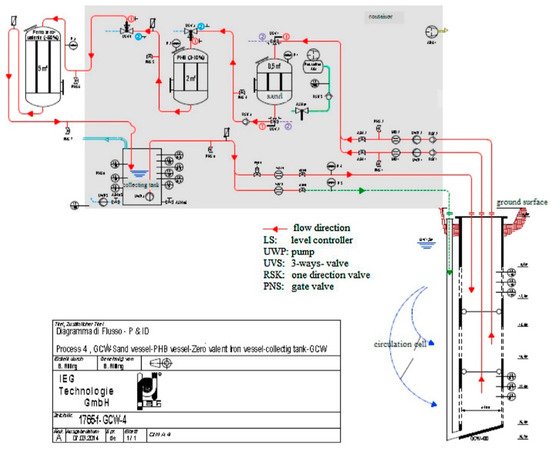 Figure 2. Piping and instrumentation diagram of the groundwater circulation well (GCW) and the polyhydroxybutyrate (PHB)-reactor and zero-valent iron (ZVI)/PHB-reactor in series. Figure from Pierro et al., 2017 [21]. Reproduced with the permission of Elsevier.

3. Combination of Adsorption and Biodegradation

The first example in Europe of completed remediation of an aquifer contaminated with CAHs by a combination of adsorption and biodegradation was reported by Ciampi and colleagues (2019) [27]. In detail, this work highlighted the importance of the integrated use of geological, hydrogeological, chemical, and geophysical data to achieve high-resolution characterization of the site (the new high-speed railway station of Bologna, Italy). The concentration levels of PCE were between 1.1–110 μg/L and those of TCE in the range of 1.5–150 μg/L, even exceeding the Italian threshold limits (CSC) by an order of magnitude for each contaminant (CSC are 1.1 and 1.5 μg/L for PCE and TCE, respectively). A commercial colloidal activated carbon, PlumeStop™ (Regenesis, San Clemente, CA, USA), was co-injected with an electron donor (HRC™, Regenesis, San Clemente, CA, USA) to provide bio-stimulation. The colloidal-activated carbon product, essentially a micrometric-activated carbon superficially modified for better distribution, created an in-situ adsorption zone. An efficient response was immediate, indeed; after the first weeks of injection, the reduction in concentration was evident, and levels of contaminants were stable over time. If the traditional activated carbon treatment only results in the transfer of contaminants from liquid or gaseous streams onto the adsorbent material without actual degradation into harmless final products, the simultaneous adsorption and biodegradation strategy should also overcome adsorbent material saturation, prolonging the operational lifespan of the reactive media and the kinetic limitation of RD [28]. The use of activated carbon as a support for PCE degradation was already investigated by Yunhai Wu et al. (2000), who described how PCE was microbially bio-transformed and adsorbed on granular biological activated carbon (GBAC) [29]. Other authors are studying this process on different types of contaminants [30]. The biofilm-GAC filters for micropollutants degradation were recently published by Piai and co-authors (2020) [31]. The study demonstrated that sorption and biodegradation occur simultaneously, leading to an efficient bio-regeneration of the GAC [31]. These promising results open doors to different configurations of application, such as the direct injection of the reactive adsorption products in the aquifer or the installation of a bio-barrier. Alternatively, an external bioreactor packed with a mixture of adsorption material/electron donor may also be feasible for the extracted water’s treatment.