A ruminant-based carboxylate platform based on mixed or undefined anaerobic co-cultures of rumen microorganisms can convert the carbohydrate polymers in the lignocellulosic part of organic waste streams to carboxylic acids that can be upgraded to biofuels or green chemicals.

The world has been reliant on crude oil and coal as the primary source of energy and materials, driven by a linear economy that primarily focuses on continual growth, consuming resources and discarding waste for more than a millennium. This is particularly true for South Africa, which is currently the world’s most carbon-intensive coal-driven developing country and the largest greenhouse gas producer in Africa [1]. However, with limiting resources and the looming danger of climate change, mankind and particularly South Africa as a water-scarce country, have to consider alternative economic models, including the utilization of renewable sources and limiting waste that ends up in landfills and waterways. Fossil resources are utilized for the industrial production of a large range of value-added products. Many of these products could be replaced by bio-based analogs, which remain secondary in production due to the lower costs and optimized production processes associated with the fossil-based industry [2]. In contrast to fossil resources, bio-based products utilize renewable feedstocks and forms part of the “green chemistry principle” that was introduced by the Environmental Protection Agency (http://www.epa.gov/greenchemistry/basics-green-chemistry (accessed on 21 June 2021)) during the 1990s. Renewable feedstocks include invasive plants, agricultural wastes (including fruit waste streams), forestry residues, and municipal waste streams.

Considering the top three fruit crops produced in South Africa ( Table 1 ), citrus, grape and apple wastes might be worthy biorefinery substrates. Although the building blocks of these fruit wastes may vary based on factors such as climate, harvesting years, fruit cultivars, cultivation and processing methodology, proximate composition analysis of fruit wastes can provide insight on the available carbon in these substrates. For example, grape pomace can contain 19–38% total dietary fibers, 3.68–29.20% pectin and 15–33% total sugar [3][4][5][6]. Apple pomace from different varieties can contain 26.8–82.0% total dietary fibers, 3.5–14.32% pectin, 11.5–49.8% fructose, 2.5–22.7% glucose and 0.05–3.28% malic acid [7]. It is also well-known that high concentrations of organic acids (such as citric, malic and tartaric acid) are responsible for the low pH of grape pomace, with a recent study reporting 19.4 g/kg malic acid in Chardonnay grape pomace [8]. Since it is not a first-generation feedstock, fruit waste biomass is a potential biorefinery substrate that doesn’t compete with food sources (such as corn and sugar cane) [9].

Whereas the fiber content in fruit waste could be readily converted to VFAs in the carboxylate platform, the production of high-value lactic or dicarboxylic acids (organic compounds containing two carboxylic acid (–COOH) functional groups) from the remaining sugars and organic acids in fruit wastes could potentially increase the economic viability of biorefineries aimed at providing bioethanol as an alternative to current petroleum-based fuels. For example, malic acid is abundant in both grape and apple pomace, which are produced in significant quantities in the South African agricultural industry.

Rumen microbial communities carry out all three biological pathways of AD within the same bioreactor (rumen), making them a natural example of consolidated bioprocessing [15]. Therefore, modeling or mimicking the rumen in vitro to produce VFAs presents a potentially cost-effective and sustainable platform. Weimer et al. [15][13] detailed some aspects of ruminants that have made them naturally adapted to carry out efficient fermentations, including the core microbiome, fermentation conditions and feedstock flexibility.

The ruminal carboxylate platform is compatible with other processes that use AD and has the potential to outweigh their process economics as it has higher loadings of biomass, higher microbial densities, higher biopolymer fermentation rates and higher yields of VFAs with low methane production [13]. Despite these favorable conditions, a few challenges need to be addressed to increase the feasibility of utilizing rumen habitats for hydrocarbon biofuel production. These include valorizing abundant wastes to increase the economic value-addition. Additionally, optimization and manipulation of process parameters to prevent methanogenesis could result in higher yields.

Incentives towards implementing the carboxylate platform lie in its potential for cost reduction in its bioconversion towards VFAs and hydrocarbons. The potential operational benefits include non-aseptic operation coupled with feedstock flexibility, minimal requirements, physical pretreatment, short fermentation periods while yielding comparable VFAs to other platforms with longer fermentation periods. Furthermore, the primary products of the carboxylate platform can be converted further with various mixed cultures or pure cultures to produce a variety of bioproducts in secondary fermentations, including chain elongation to MCFA, carboxylate reduction to alcohols, acetogenesis to acetate, capturing the hydrogen produced to utilize as clean gas or allowing methanogens to establish themselves and convert the intermediates to biogas. The potential production of multiple products from biomass via the different routes of secondary fermentation is in line with the principle of a biorefinery concept, which renders the platform particularly attractive to researchers. This motivates research on finding alternative strategies for full degradation of feedstock by rumen such as those listed above as the potential towards hydrocarbon fuel generation with this platform is high.

Although yeasts are not generally known as organic acid producers, strains of Brettanomyces, Candida utilis, Pachysolen tannophilus and Scheffersomyces stipitis produce fumaric acid [16][17]. With their higher resistance to acidic environments and non-hyphal nature, yeast strains could be competitive alternative microbial hosts to produce organic acids such as fumaric acid. Various yeast strains have been adapted for fumaric acid production using different genetic modifications and expression systems, including S. cerevisiae, Candida glabrata (previously known as Torulopsis glabrata) and S. stipitis. The expression of both heterologous enzymes and transporters are often involved in the genetic modifications of the yeast candidates.

Citric acid (2-hydroxy propane 1, 2, 3-tricarboxylic acid) with its non-toxic nature, GRAS status and pleasant sour taste is considered to be one of the most important natural organic acids ( Table 2 ) [18]. Like malic acid, it can be found in a variety of fruits such as berries, grapes, lemons, limes, oranges and tangerines. Its extensive use as an acidulant, antioxidant, buffer, emulsifier and preservative in food industries as well as its application in chemical, medical and pharmaceutical industries, add to its massive global market value. Production of this organic acid can be done via physical or chemical methods, which are complex, expensive and not environmentally friendly [19][20][21]. Efficient and continuous production methods are required to meet the high demand for this organic acid that far exceeds its current supply.

Lactic acid (2-hydroxypropanoic acid) is an organic acid widely distributed in nature and has been used by mankind for decades [28]. It enjoys GRAS status and has been applied in the chemical, cosmetic, food and pharmaceutical industries [29]. It is also an important role player in the production of bioplastics such as polylactide polymers (polylactic acid, PLA) [30], which are more easily degradable than conventional plastics.

Succinic acid also have important applications in the plastics industry [157], as well as agricultural, food and pharmaceutical industries [156]. Although mainly produced via the petrochemical route, there are three biosynthetic pathways for microbial production that can be explored. Fungal candidates previously assessed for succinic acid production include Pichia kudriavzevii, S. cerevisiae and Yarrowia lipolytica [155,161–167].

Yeasts as acetic acid production hosts have not gained much attention and the presence of acetic acid is often unwanted in yeast-based industries (such as winemaking). However, as part of a biorefinery concept, the production of this organic acid could be attractive due to its growing market [31]. A recent study using malic acid-degrading yeasts indicated that acetic acid could be acquired as a by-product when cultivated in media containing malic acid and glucose/xylose [32] or fruit wastes such as apple and grape pomace. To produce acetic acid from malic acid, the conversion of the latter to pyruvate (via the malic enzyme) would potentially allow for acetic acid formation ( Figure 1 ) 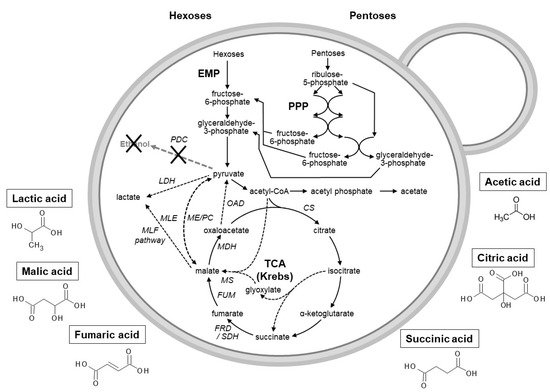 The in vitro utilization of the rumen microbiome in the carboxylate platform could be a valuable alternative small-scale platform to supplement bioethanol production in SA. The stability, resilience, overlap of function, robustness and flexibility of the microbiome makes it an attractive community for AD bioprocesses. Furthermore, this community produces all the enzymes required for hydrolysis and fermentation, making it a natural form of consolidated bioprocessing. Though no techno-economic analysis has yet been conducted for a rumen-based carboxylate platform, it can be estimated by comparing the production costs with other microbial community profiles, such as sewage microbial communities that have been used extensively for biogas production in SA. It is predicted that the use of physical instead of chemical pretreatment, natural acclimation to short RT, mesophilic temperature utilization, initial pH adjustment with buffer only and overall diverse end-product yields would reduce costs and improve the overall economic feasibility of the platform. Several yeast microbial hosts have shown promise for the conversion of sugars and malic acid present in fruit wastes to produce valuable dicarboxylate acids, thus advancing the biorefinery concept. However, for such biorefineries to become economically feasible, industrial-scale fermentation processes with sufficient yields in organic acids will have to be developed and integrated with existing biobased processes. Combining the carboxylate platform and organic acid production could offer a unique opportunity for the conversion of fruit and mixed biomass wastes to higher-value organic acids.