Plants in the genus Wolffia have a cosmopolitan distribution, populating the lentic ecosystems in almost all the continents except the Antarctic and Arctic regions. Wolffia is a genus of plants with 11 species and including both the fastest-growing angiospermand the smallest flowering plants(a). As is the case for other species in the family, plants in the genus Wolffia consist of a single physical unit termed frond, or thallus, and interpreted as a leaf and stem in an embryonic stage of development.

To date, artificial ecosystems such as the bioregenerative life support system (BLSS) are the expected technology to support long interplanetary missions [1][2]. The BLSSs concept includes several interconnected compartments in which different types of organisms are used to recycle resources and making these available to other compartments of the system [3]. Within space BLSSs, the photoautotrophic compartment only requires light from outside of the system and recycles carbon dioxide, wastewater, and other wastes to produce edible biomass, oxygen, and water used by the astronauts. One such system is MELiSSA (Micro-Ecological Life Support System Alternative), a project of the European Space Agency for life support to space exploration [3]. The MELiSSA loop aims to produce food, oxygen and recycle water and carbon dioxide to sustain astronaut life in Space missions to reduce the initial payload and dependency on the Earth. Although a few common crop species have been successfully grown in space, a smooth transition from an experimental context to cultivation is not a given, and specific methodologies for selecting candidate plants for BLSS were thus proposed [4][5][6]. Space farming places more demands on plants than conventional agriculture due to the extreme condition of the space environment, which require plants to tolerate factors, such as cosmic radiation and the absence of gravity, while at the same time sustaining astronaut life. The best crop plants in space must produce edible biomass in a high-quality, fast and reliable way, without wasting resources on the production of non-edible biomass and while thus maximising resource utilisation [7]. Candidate species for space farming are increasing; plants at a different stage of development are considered; they include leafy greens, microgreens (e.g., Brassica oleracea, Rumex acetosa, Lepidium bonariense, Coriandrum sativum, Amaranthus hypochondriacu), fruit crops (e.g., Fragaria vesca , Solanum lycopersicum ), and tuber crops ( Solanum tuberosum ) [8]. These candidate species were chosen from among crop species commonly used on Earth, and current efforts focus on improving these crops with respect to, e.g. , small size (dwarf varieties), fast growth and optimal nutrient content for the astronaut diet [9]. A different approach focuses on alternative species not yet widely cultivated on Earth but possessing several attra ctive traits for food production in space. Arthrospira platensis (commonly referred to as Spirulina) is a current example. This filamentous cyanobacterium is the most widely cultivated photosynthetic prokaryote and is promoted as a candidate for BLSSs for space missions [3][10]. The present review focuses on additional new candidate crops, with attention to duckweeds (family Lemnaceae), and specifically the possible use of Wolffia species as plants to be cultivated in BLSSs in space.

Besides the nuanced morphological differences, important traits are common to all Lemnaceae and include small size, structural simplicity, exponential growth and genetical uniformity due to the predominant vegetative reproduction. Such traits have led scientists to suggest species of the family Lemnaceae as suitable candidates for space cultivation [11][12]. Despite the growing number of studies, the resulting knowledge cannot be directly applied to space farming and will need further testing in space-relevant environments. Moreover, and as mentioned above, most of the new scientific interest is focused on plants of the genus Lemna . The results do not represent all species in the family Lemnaceae due to a high degree of variability between and within species. Within the family Lemnaceae, the genus Wolffia includes eleven species and is well known for featuring both the fastest growing and the most diminutive flowering plants globally [13][14]. In addition to the peculiarity of these records, Wolffia species possess numerous traits that make them potentially suitable as a candidate crop for plant-based BLSSs. For instance, the average relative growth rate of Wolffia species is higher than that of most angiosperms and possibly even other Lemnaceae [14]. The rootless morphology maximises the harvest index [12]. The nutritional profile of Wolffia species has excellent characteristics [15] and is improved by the absence of toxic substances (e.g. oxalic acid) [16]. Moreover, Wolffia species are suitable for new biotechnological applications and nutrient removal from sewage water [17][18][19][20][21].

In addition, the positive buoyancy typically exhibited by these plants in water could facilitate the transition between Earth and the space environment where the effect of gravity is absent. We considered that all these traits could pave the way for Wolffia species to be suitable for space cultivation.

This work reviewed the primary scientific literature on plants in the family Lemnaceae, with an emphasis on Wolffia species. The objective was to synthesise the literature and identify possible bottlenecks for utilising Wolffia species in space cultivation in BLSS. We focused our attention on plant biological traits, nutritional features, biomass production, and space applications.

Plants in the genus Wolffia have a cosmopolitan distribution, populating the lentic ecosystems in almost all the continents except the Antarctic and Arctic regions [22]. Wolffia is a genus of plants with 11 species and including both the fastest-growing angiosperm [14] and the smallest flowering plants [14] ( Figure 1 a). As is the case for other species in the family, plants in the genus Wolffia consist of a single physical unit termed frond, or thallus, and interpreted as a leaf and stem in an embryonic stage of development [16][23]. Fronds of Wolffia species have a globose, ovoid boat shape ( Figure 1 b). In each plant, the newly formed frond (daughter) develops from meristematic cells in a pocket of the older frond (mother) ( Figure 1 c). 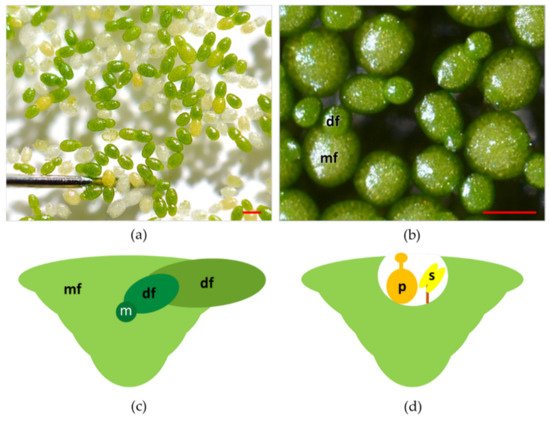 Colonies of fronds consist of a large number of individuals forming the so-called "clusters". Colonies of Wolffia species rarely consist of more than two visible fronds per individual, while, anatomically, each mature plant is composed of multiple individual fronds at different stages of development ( Figure 1 c) [24][25]. Species of the genus Wolffia do not develop roots and are recounted to absorb water and nutrients through the underside of their main frond, making the root function redundant [24][25][26]. It is worth mentioning that this redundancy of roots functionalities also occurs in other Lemnaceae. More specifically, in Lemna species, plants under replete nutrient concentrations manage nutrient uptake mostly from leaves surface [27]. Vegetative propagation based on meristematic cells in the pocket of the fronds is by far the most recurrent way of plant reproduction [16]. However, under unfavourable conditions (temperatures below 15 °C or nutrient-depleted substrates), Wolffia species can produce perennating organs termed turions, the formation of which is an alternative strategy to normal frond development [28][29].

In Wolffia species, flowers develop inside a cavity that opens near the median line of the upper frond surface ( Figure 1 d). Flowers are composed of one stamen with the anther and a pistil within which there is one atropous ovule [16]. Recently, laboratory protocols were developed to control flowering in W. microscopica [30]. Nevertheless, several aspects of the reproductive biology and ecology of Wolffia species are still unexplored. One crucial point is to assess how these plants transfer pollen from one to another. Some authors have hypothesised that the main form of pollination in these plants is by fish, birds, or strong wind [16][31][32], but these dispersal models have not yet been verified. Such a lack of knowledge limits the possibility of increasing the genetic variability of plants for breeding and selection.

Effective vegetative propagation increases biomass production rate, and cloning maintains genetic uniformity facilitating industrial applications. So far, only one genome has been sequenced (W. australiana) [33][34] further comparison among chloroplast genomes shows that the genus Wolffia possesses the most reduced genome size in Lemnaceae [35]. Genome size varied between 375 Mb in W. australiana to 1881 Mb in W. arrhiza [36]. Different genetic manipulation strategies have been conducted and tested on several Wolffia species (W. australiana, W. globosa, and W. columbiana) [37][38][39]. Such manipulations were not stable, except for those conducted by Khvatkov et al. [40] using W. arrhiza, a producer for recombinant human granulocyte colony-stimulating factor. The stability of transient transformation is crucial for being able to adopt Wolffia for mainstream commercial applications. Recently W. globosa was genetically transformed through transient genetic transformation protocols [41]. The advent of stable genetic modification protocols for the Wolffia species is now accelerating the application of these plants in biopharming, where recombinant plants produce complex molecules and proteins. One such example is hirudin production, a peptide produced by leeches saliva that has anticoagulant properties used by modern medicine to cure different types of thrombosis [42][43].

Plants of Wolffia species can reach a productivity of 265 tons/ha (10.5 tons/ha of dry weight) of fresh weight calculated annually based on nine months in a non-controlled environment [44]. In controlled environments, clusters can reach a production rate of 86–160 g-wet/m 2/d for the vegetative fronds and 55–64 g-wet /m 2/d for the turions, where variations are nutrient-dependent [45].

Generally, for research purposes, duckweed growth is measured as the relative growth rate per day (RGR). Naumann et al. [46] describe the calculation of RGR for different bases, including fresh weight, frond number, chlorophyll content, or carotenoid content. The exponential growth rate of duckweeds is measured through doubling time (DT). Under controlled environmental conditions, the highest RGR (0.559/day) was observed in W. globosa and the fastest DT (29.3 h) in W. microscopica . It is worth noticing the profound variation in RGR and DT among locally adapted ecotypes of the same species, which complicates comparison among species (e.g. [14]). In a comparative study, the RGR of Wolffia species was not statistically different from the other genera of the family Lemnaceae [12]. The exponential growth that characterises these plants is presumably related to their high nutrient uptake of 2–6 g/day of nitrogen assimilation per kilo of fresh mass and 1.64–4.94 g/day of ammonium [47]. The natural capacity of assimilating high quantities of ammonium makes this group of plants ideal for recovering nutrients from waste products. Wolffia species can remove 70–80% of the nitrogen and phosphorus in secondary treated sewage effluent in 7 days [14]. More specifically, the possibility of using Wolffia species as a viable alternative to recover nutrients from wastewaters and converting the produced biomass to bioethanol has been investigated. Experiments conducted with W. globosa show that bioethanol production is achievable [48].

The high efficiency in taking nutrients has also been exploited in phytoremediation practice. Numerous experiments have been conducted in this framework, successfully removing pollutant such as arsenic, nitrate, and phosphate from water [19][20].

Plants of the genus Wolffia have been less studied than other species from the family Lemnaceae. Nevertheless, available information indicates that Wolffia species are attractive candidate species for BLSS and that future research is warranted to support the adoption of Wolffia species for space missions.

Plant cultivation in bioreactors could be beneficial for space exploration missions where batches of recombinant Wolffia species could be employed to produce complex molecules and nutraceutical constituents.

In a scenario of space greenhouses, productivity can be maximised by growing the plants in multiple stacked layers, allowing a vertical cultivation system. The possibility of optimising the whole volume of the growth chambers would be enhanced by exploring the potential to cultivate these plants in bioreactors as those currently employed for microalgae cultivation for space missions.

Finally, in a scenario of space cultivation with fully controlled growth systems, the nutritional content of plants of Wolffia species can be modulated by fine-tuning the environmental parameters. The protein and starch content can be adjusted to diet requirements by alternating the production of fronds (richer in protein) with turion (richer in starch).