Ludwigia decurrens Walter is a dicotyledonous plant belonging to the family Onagraceae. It is native to Central Eastern USA but has been spreading quickly and has naturalized in aquatic and riparian ecosystems (including rice paddy fields) in many countries; therefore, it is now considered an invasive noxious weed. L. decurrens is highly competitive with rice and causes a significant reduction in rice production. The objective of the present study was to evaluate the efficacy of the herbicide penoxsulam for the control of L. decurrens in rice fields. The seeds of L. decurrens were collected from four villages in Indonesia, and penoxsulam was applied to L. decurrens in seven dosages (0, 2.5, 5, 10, 20, 40, and 80 g a.i. /ha) 3 weeks after seed sowing. The plant populations from Hegarmanah, Jatisari, and Joho showed complete mortality at the recommended dosage of penoxsulam (10 g a.i. /ha). However, the plants from Demakan grew, flowered, and produced seeds 56 days after treatment with 40 g a.i. /ha of penoxsulam. The resistance index value of the population was 36.06.

Ludwigia decurrens Walter, belonging to the Onagraceae family, is a synonym of Jussiaea decurrens Walter D.C. It is an annual or woody perennial herb that stands upright reaching 2 m of height, with alternate branches. The leaves are opposite, narrowly elliptical, 4–12 cm long, and 1–3 cm wide. A single flower with four bright yellow petals is produced in the upper leaf axis. A seed capsule develops immediately below the flower and contains up to 1000 seeds per capsule [1][2][3]. The species grows in wetlands including paddy fields, riverbanks, ponds, and slow-moving streams [1][4]. It has adapted to these aquatic habitats through the development of rhizomes with aerenchyma [5].
L. decurrens is native to Central Eastern USA but has been introduced accidentally into many countries in South and East Asia and Africa, where it is now considered an invasive noxious weed [1][2][4][6][7]. It produces a large number of seeds and spreads rapidly in the wet zone through seeds and plant fragments floating on water [1][4][8]. It has also allelopathic properties. The exudates of the plants inhibited the growth of Corchorus olitorius L. and increased its mortality [9]. Allelopathy may also be involved in L. decurrens invasion [10][11][12]. The severe invasion of some plant species often causes a significant reduction of biodiversity in the invaded ecosystems [13][14]. The risk of a negative environmental impact for L. decurrens is high because of its pest dispersal potential [4].
L. decurrens emerges along with rice seedlings and grows in rice paddy fields. It is highly competitive with rice due to its fast growth rate and a life cycle similar to that of rice and causes a significant reduction in rice production [1][15]. L. decurrens suppresses the development of tillers, panicles, leaves, and spikelets of rice plants. Consequently, the risk of an economic impact due to lower crop yields and quality is high [4]. For example, L. decurrens has been reported to reduce rice grain yield by around 30% [15]. Penoxsulam is one of the pre-emergence herbicides widely used in rice cultivation [16]. It is an acetolactate synthase (ALS; EC 4.6.3.8) inhibitor and is an efficient broad-spectrum herbicide against grass and broadleaf weeds [17]. This herbicide has been effective in controlling L. decurrens. However, excessive application of herbicides increases the potential to develop resistant weeds [18][19][20]. The appearance of herbicide-resistant weeds was predicted by Harper in 1956 [21], and a herbicide resistant-weed was first observed in sugarcane plantations in Hawaii [22]. Following this, triazine-resistant Senecio vulgaris L. [23] and 2,4-D-resistant Convolvulus arvensis L. [24] were recorded. Currently, 264 herbicide-resistant weed species—522 cases (species × site of action) for 164 herbicides—have been reported in 94 crops in 71 countries [25]. The present study was conducted due to reports of L. decurrens becoming difficult to control in rice paddy fields of Central Java, Indonesia. The efficiency of penoxsulam on L. decurrens collected from four Central Java villages was evaluated, and a penoxsulam-resistant L. decurrens population was confirmed for the first time.

An invasive plant species, L. decurrens, has been spreading quickly and naturalized into aquatic and riparian ecosystems including rice paddy fields in many countries [1][2][4][6][7]. This species has been reported to occupy 50% of the invaded plant community, and thus is considered one of the most aggressive weed species [3][8]. Consequently, the risks associated with L. decurrens invasion are high from both an environmental and an economic perspective [4]. Management of L. decurrens relies on physical and chemical methods [26], and penoxsulam has effectively controlled L. decurrens so far. However, we identified penoxsulam-resistant L. decurrens plants from a Demakan population for the first time in this study (Figure 1, Table 1). The resistance index value of the population was 36.06 (Table 2), and the plants made flowers and produced seeds (Figure 2). 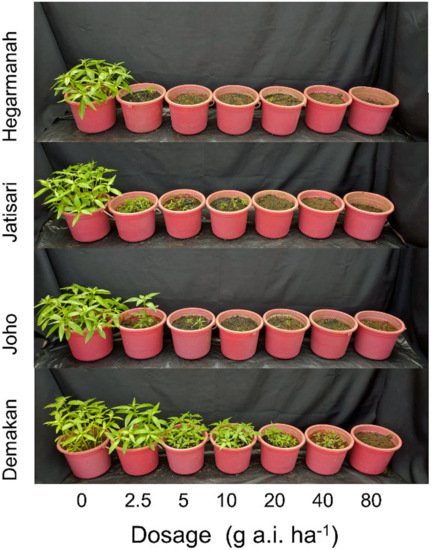 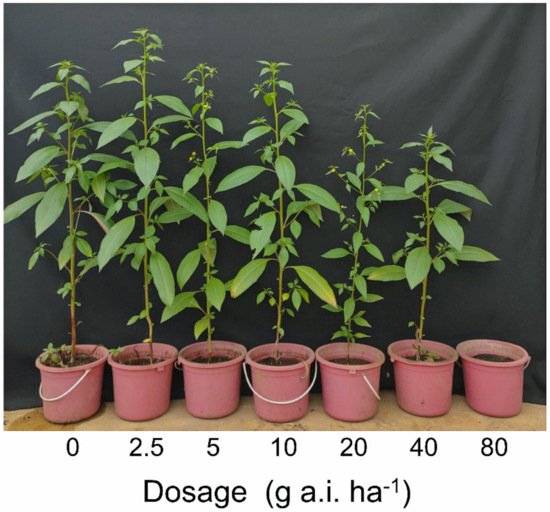 Figure 2. Effect of penoxsulam on the Demakan population of L. decurrens 56 days after herbicide application.
Table 2. Herbicide dose required for 50% reduction (GR50) of dry biomass and resistance index.
GR50 values of penoxsulam were obtained by nonlinear regression using the log-logistic dose–response equation. The resistance index against penoxsulam was calculated by the ratio of the GR50 value of the Hegarmanah population to those of the other three populations.
The percentage of damage was calculated from the comparison between the dry weight of herbicide-treated L. decurrens and that of control L. decurrens. Damage of 100% indicates complete inhibition. Values in each column followed by the same lowercase letters (vertical direction) and uppercase letters (horizontal direction) are not significantly different at p < 0.05 according to the Tukey test.
The possibility of the herbicide-resistant L. decurrens to spread and dominate in the surrounding area may be high because of the properties of the species [3][8]. The total area of rice paddy fields is 20,460 ha in the Sukoharjo regency, which the Demakan village belongs to [27]. In addition, the protected forest Gunung Merbabu and the Gajah Mungkur water reservoir are located 20 and 50 km from the study area of the Demakan village, respectively. L. decurrens has been recorded to spread up to 120 km through seeds and plant fragments floating on water [28]. Therefore, the appearance of herbicide-resistant L. decurrens could be a possible threat for the nearby protected areas.
The excess application of herbicides with a single mode of action increases the risk of causing gene mutations leading to the appearance of herbicide-resistant weeds. Many other factors, such as cropping system, weed potentiality, and environment, also increase the appearance of resistant weeds [18][19][20]. Echinochloa crus-galli (L.) P.Beauv. is one of the most dangerous weeds in crop production and is mainly controlled by herbicides [25][29][30]. Continuous and excess applications of herbicides such as ALS-inhibiting and acetyl-CoA carboxylase (ACCase; E.C.6.4.1.2)-inhibiting herbicides have originated multiple-herbicide-resistant E. crus-galli populations [25][29][30][31][32][33].
ALS is the enzyme in the biosynthetic pathway of the branched-chain amino acids valine, leucine, and isoleucine [34]. ALS is an important target site for at least four structurally distinct classes of herbicides, i.e., sulfonylureas [35][36], imidazolinones [37], triazolopyrimidines [38], and pyrimidinylsalicylates [39]. The ALS inhibitor penoxsulam has become the most widely used herbicide in rice cultivation since its introduction [16][33]. There have been 103 cases of weed resistance to ALS herbicides in rice cultivation [18][25]. Limnocharis flava (L.) Buchenau from Malaysia’s Penang Island was found to be resistant to several ALS enzyme-inhibiting herbicides, such as the sulfonylurea and imidazolinone herbicide groups. Monochoria vaginalis (Burm.f.) Kunth from rice fields with an intensive use of herbicides in Chonnam, Korea, was resistant to the sulfonylurea and pyrimidinylsalicylate groups. Therefore, some ALS herbicide-resistant weed species showed resistance to multiple herbicides [18][25]. Based on the data from herbicide-resistant weed species, 7 penoxsulam resistant-weed species with 19 cases have been reported: Echinochloa crus-galli, Echinochloa oryzicola Vasing., Cyperus iria L., Cyperus difformis L., Cyperus esculentus L., Fimbristylis miliacea (L.) Vahl., and Sagittaria montevidensis Cham. & Schltdl. Of the 19 penoxsulam resistance cases, 17 experienced cross or multiple resistance [25]. All penoxsulam-resistant weed species reported belong to monocotyledonous plant species, and Echinochloa crus-galli was the most frequently reported. Ours is the first report of a penoxsulam-resistant weed from dicotyledonous plant species and also the first report of a herbicide-resistant population of L. decurrens [25].
According to Heap [18][25], there are five primary mechanisms of herbicide resistance: (1) target-site resistance, (2) enhanced metabolism of herbicides, (3) decreased absorption and translocation of herbicides, (4) sequestration of herbicides, and (5) gene amplification of target genes. Resistance to ALS inhibitors, ACCase inhibitors, triazine and dinitroaniline herbicides is often caused by target-site resistance mechanism. Target-site resistance may be caused by gene mutations that modify the herbicide binding site, inhibiting herbicide binding [18][33]. Mutations in ALS inhibitors have been reported in the amino acids Thr102 (four cases), Ala103 (one case), and Pro103 (21 cases) of the ALS protein (the amino acid number is standardized according to the sequence of the ALS protein in Arabidopsis thaliana (L.) Heynh.) in various weed species [25]. The high frequency of herbicide application can increase the possibility of gene mutations that modify the herbicide binding sites [18][33]. As describe earlier, farmers of Demakan villages applied penoxsulam twice during each rice growing season with three rice cultivations per year for over 10 years, without herbicide rotation. Therefore, it is possible that penoxsulam resistance in L. decurrens may have been caused by mutations leading to the modification of the herbicide binding sites, causing target-site resistance.
The appearance of resistance to multiple herbicides in weeds is a serious issue for weed control. In fact, populations of Lolium rigidum Gaud. were found to be resistant in seven herbicide action sites [18][25][40]. Populations of Amaranthus palmeri S.Wats. showed resistance to PSII inhibitors, ALS inhibitors, ACCase inhibitors, 4-HPPD inhibitors, glyphosate, and others [18][25]. Population of Ludwigia prostrata Roxb., which belongs to the same genus of L. decurrens, from South Korea, showed multiple resistance to ALS inhibitor herbicides, such as sulfonylureas, imidazolinones, and pyrimidinylsalicylates [18][25]. Therefore, further investigation of resistance to multiple herbicides in L. decurrens is necessary.
The most common herbicide resistance management strategy may be to rotate herbicide action sites [41][42]. This practice may delay the evolution of herbicide resistance. The employment of herbicide mixtures, such as combinations of ALS inhibitors, ACCase inhibitors, glyphosate, glufosinate, 4-HPPD inhibitors, and synthetic auxins may also delay the appearance of resistance. However, it is essential to identify the penoxsulam resistance mechanism in L. decurrens to design an efficient herbicide resistance management strategy.