Green innovation (GI) is an essential measure to realize green growth. The value of GI on achieving sustainable development goals is increasingly recognized in recent years. Promoting GI is also the fundamental requirement of China’s 14th Five-Year Plan. Notwithstanding that the central government has put the sustainable development goals at the heart of policy-making, formulating several environmental policies, the overall efficiency of environmental governance does not meet expectations. The GI of manufacturing industries is insufficient, and the phenomenon of illegally discharging pollutants continues to repeat, making the effects of policies into question.

1. The Development of Regulatory Capture Theory

Downs [1] gives the foundation of the modern “capture” theory of political behavior. In Downs’s view, private interests are willing to put regulations into effect by persuasion, campaign contributions, or other political action to benefit their interests. Stigler [2] claims that although a policy is set up to prevent monopoly, the economic interest may use the public resources and powers by providing officials with political votes and bribery to benefit their economic status. And Posner [3] claims that even though the priority of the policy formulation is for public interests, due to the influence of regulated interests, the policy ends up being ‘captured’ by private interests it should discipline.

Laffont and Tirole [5] consider the informational asymmetries, bring the demand and the supply side together, and develop an agency-theoretic approach. Laffont points out that the regulatory structure is two-tiered: agency (the supervisor) and Congress (the principle). There exist informational asymmetries between the principal (Congress) and the supervisor (agency). The agency can obtain the information from the enterprises and report to Congress. Therefore, interest groups can collude with the agency to retain specific kinds of information. In this case, the agency may conceal information for personal gains and only report the information beneficial to the enterprises to Congress, thus forming collective regulation captures. The framework of “regulatory authority-the agency-multiple interest groups” makes the theory of regulatory capture breakthroughs in the limits of organizational boundaries, and to a certain extent, provides theoretical guidance for the practice of weakening of the regulatory capture in Western countries in the last century.

2. The Affecting Factors of Regulatory Capture

Local governments generally have policy burdens such as promoting economic development and maintaining employment rates [6]. When manufacturing companies do not carry out GI and violate environmental regulations to discharge pollution, as long as manufacturing enterprises’ revenue is highly related to the local economy and employment, they can use policy burdens they undertake to intervene in the regulatory process, making it difficult for local governments to impose strict penalties on enterprises and even provide cover and shelter for them [7]. Shen et al. [8] use the instrumental variable method to examine the effect of central government’s behaviors of setting economic development goals on the regional GI, indicating that the economic development goals have significant inhibitory effects on regional green technology innovation, and the inhibitory effect is more prominent in cities with faster economic growth and over-fulfillment of economic development goals. As a result, environmental problems are getting worse, and the development of GI is hindered.

The negative effect of policy burdens on regulatory capture not only occurs in environmental governance but also in other fields. We take state-owned enterprises as an example. KORNAI* [9] proposes a concept called “soft budget constraint” when analyzing the socialist economy and thinks soft budget constraints will bring about many problems in the economy, such as the moral hazard of managers, which cause the operation inefficiency of enterprises. Since state-owned enterprises undertake policy burdens such as protecting industries, maintaining social stability, and stimulating economic development, the government has to rescue loss-making state-owned enterprises by increasing financial subsidies, giving loans support, reducing taxes, and so on [6].

The central government of China has found out the built-in “environmentally unfriendly” policy burdens in the cadre performance system and promulgated environmental regulations such as the “Leading Officials’ Accountability Audit of Natural Resource” and incorporated the environmental performance into the performance evaluation of local officials. However, the overall policy efficiency needs to be improved. Feng et al. [10] explore the relationship of Accountability Audit of Natural Resource and political promotion in China and show that to some extent, the accountability can decrease the dependence on the traditional “political tournament mechanism”. Wu and Cao [11] show the link between pollution control and the promotion of officials, but this kind of link only exists at the county level, not at the municipal and provincial level.

Scholars also indicate that the external supervisory agency, such as media, can restrain regulatory capture [12][13][14][15]. Laffont and Meleu [12] study the reciprocal supervision in an institution with one principal and two agents. This study shows that the information exchange between two agents may hurt the principal, and such a dual supervisory structure enhances the possibility of collusion, indicating that the principal should have a third party be the supervisor to avoid regulatory capture. Fremeth and Holburn [13] propose that the information asymmetries between regulators and enterprises increase the costs of setting up new policies, and information asymmetry can be reduced through previous regulatory experience, knowledge gained from interest groups, or information from other supervisory institutions. Gong et al. [14] suggest allowing and protecting media reports and encouraging the establishment of private supervision institutions can reduce the asymmetry of information. Gao et al. [15] indicate the positive effect of media in promoting government information disclosure in environmental accidents. Grafton and Williams [16] show that the evidence of regulatory capture in the Murray-Darling Basin stems from a 2017 media investigation of water theft in the northern Murray-Darling Basin.

3. The Affecting Factors of GI

GI is a process that contributes to the creation of new products and technologies intending to reduce environmental degradation [17], and GI includes innovation in energy conservation, pollution prevention, waste recycling, green product design, and environmental management [18]. Many scholars have evaluated the affecting factors of GI. From the perspective of enterprises, green R&D expenditure [19][20], top management [21][22][23][24][25], organizational culture and employee [25][26][27], corporate profitability [28], and knowledge sharing [29][30][31] are main factors which affect the GI. From the perspective of market, market demands [24][32], the demand of customers and the stakeholders [24][28][33], and market competition [20][24][34] are main factors affecting GI. From the perspective of government, government support [35][36], environmental regulations [37][38][39][40][41] and policy burdens [8] are the main factors that affect the outcome of GI.

Further, Gao et al. [15] examine the role of social media on information disclosure of environmental incidents through evolutionary game theory. The results indicate that social media can affect information disclosure of environmental incidents through top-down intervention and bottom-up reputation mechanisms. Chen et al. [52] use evolutionary game theory to model the relationship among government, enterprise, and the public in environmental governance and prove public participation significantly promotes the control of industrial wastes. The authors of Xu et al. [53] build the tripartite evolutionary game model to explore the strategical choices among governments, environmental services companies, and pollutant discharging enterprises. The results show that the “public-private-partnership” governance system and administrative penalties are the key points to the governance of environmental pollution. However, these studies all tacitly assume that the government can effectively implement environmental policies and promote GI. The scenarios where government policies fail due to regulatory capture have not yet been discussed. Further, the role of policy burdens in regulatory capture is not verified.

5. Toward and Analytical Framework

Based on existing research, the paper uses evolutionary game theory to explore how the policy burdens and media reshape the decision-making between local governments and manufacturing enterprises in environmental governance. Then, this study has revealed the behavioral change between local governments and manufacturing enterprises through numerical simulation. Besides, we have discussed the difference between the impacts of policy burdens and media on environmental behaviors. Ultimately, combined with the different development stages of China’s green industry, the corresponding policy recommendations are given. 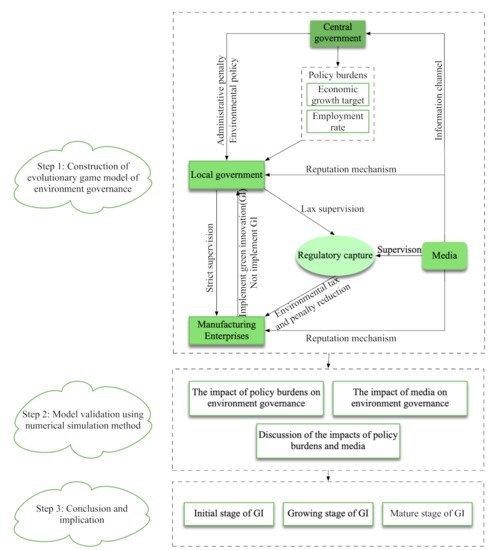 At the same time, the media can participate in environmental governance in two ways. First, the media participates in the environmental governance by reputation mechanism [15]. The reputation mechanism of media is that the media can realize its supervisory function by influencing the reputation of governments, enterprises, or individuals [55]. Second, media will act as an information channel of the central government, expose information to the central government and introduce administrative penalties from the central government [15]. In particular, the media judges whether regulatory capture exists by checking local environmental improvement and the application and authorization of green patents for manufacturing enterprises. Therefore, only when manufacturing enterprises choose not to implement GI, the media has a chance to find regulatory capture.