Human activities have provoked serious effects on nutrient cycle, streams ecological functioning, and water quality [1][2][3]. Presently, agriculture production consummately depends on the amount of fertilizers and pesticides used. Fertilizers mainly contain nitrogen compared with other chemicals. Crops require nitrogen for their growth and for the production of fruits or grains. Some agricultural specialists have also recommended using the fertilizers that carry a higher percentage of nitrogen [4]. However, only 40%–70% of nitrogen compounds applied as fertilizers are absorbed by the crops. The remaining nitrogen compounds either percolate downward with water to join groundwater or flow along with the runoff water to join the streams [5][6]. In both cases, the nitrogen concentration in water escalates, which can affect human health [7][8][9]. If pesticides and fertilizers are added to the fields at a high rate, there is more chance for nitrate to percolate to the aquifer, increasing the nitrate level in groundwater [10][11][12]. In warmer countries, the loss of total nitrogen is more, as mineralization rate is probably higher due to the higher temperature; thus, the percolation of total nitrogen is increased [13].

The major proportion of the surplus nitrogen is transported by the runoff water to the streams, and consequently, nitrogen compounds such as ammonia-nitrogen, nitrite, and nitrate, are escalated in the streams. A surfeit of nitrogen in streams seems to be deleterious for both human beings and aquatic lives. In water bodies, it may lead to the magnification of aquatic plants and algae, which can result in the depletion of dissolved oxygen and hinder the contact of water with air and light. The presence of such excess nitrogen in drinking water reduces the amount of oxygen transported in the blood [5]. Mostly, treatment plants are not designed for the full removal of nitrogen compounds from river water. In China, sewage treatment systems remove total nitrogen by 40%–70% [14][15]. In Malaysia, sewage treatment plants are not designed for ammonia removal [16]. Recently, several water treatment plants have been forced to shut down when, after testing the samples, it was found that ammonia-nitrogen pollution has crossed the acceptable limit in different rivers in Malaysia. The abrupt closure of the water treatment plant affects the water supply to the consumers. Thus, adding additional pressure on the government for arranging alternate source of water supply.

The lack of monitoring systems leads to an abrupt increase in pollution, which can result in the closure of the water treatment plants. Monitoring systems should contain a proper predictive system: which works based on the historical data; and a treatment system: that deals with the nitrogen pollutant, should be developed in treatment plants. Predictive systems could provide the daily data of pollutants and thus save the daily effort of quantifying such data in the laboratory. Moreover, predictive systems would create an alert for nitrogen surge in rivers before it actually happens. Hence, the government would have ample time to optimize various nitrogen inputs in the rivers. Different river basins require separate predictive model, trained on historical data of basin’s parameters because a model well-trained on historical data of one particular basin, not necessarily will perform with same accuracy on different basins. Hence, the government require separate predictive model for each basin. Also, to consider the upcoming seasonal changes the predictive models need to be re-trained with the real-time data quarterly or yearly basis. Observing the increased pollution of nitrogen in rivers, this topic becomes important to be evaluated.

Nitrogen, if present in river water causes different disorders, which are deleterious for both human and aquatic animals. Nitrogen present in streams are mainly found in three compound states: ammonia, nitrate, and nitrite. Some amounts of ammonia present in the river water get converted to nitrate depending on the dissolved oxygen concentration in the water [39]. As stated earlier, nitrate is not much deleterious, but if present in surplus amount, it starts converting into nitrite, which is very harmful even in minute concentration. The Environmental Protection Agency has set standards that state that for water that is to be distributed for public use, the maximum acceptable nitrate concentration is 10 mg/l [5][25] and that for nitrite is 1 mg/l.

There are two major effects of ammonia on whole ecosystem: eutrophication of marine and terrestrial ecosystems [40][41] and increase in the acidity of water bodies [42]. Excessive nutrients such as nitrogen and phosphorus when present in water bodies lead to the growth of algae on the top surface of water; this process is termed as eutrophication. Excess grown algae cover the whole water surface, blocking the contact of water from sunlight and air. Additionally, the algae growth decreases the oxygen level in water body, which affects the aquatic lives. Stream eutrophication was recognized as a major problem years ago, and the United States along with other countries commenced nutrient control measures in rivers [43][44].

Streams may get acidified due to the presence of surfeit ammonia. The most common form of ammonia, ammonium sulphate, leads to formation of considerable amount of acid, as hydrogen ions are released during nitrification. Also, nitrite ions present in the streams lead to the formation of nitric acid under different situations along with sulfate ions, consequently acidifying the stream water [45]. Acidic stream water is not even suitable for reuse to satisfy human water requirements. As stated by Gündüz [46], one day, reuse of treated water would be a reality for the rural population, and this would result in serious problems such as human health issues. Compared with urban areas, agricultural areas are more susceptible to health risks by the presence of nitrate-nitrogen in groundwater [47][48].

Nitrite has been found to be more toxic than nitrate and if present in drinking water can cause human health problems such as liver damage and in worst cases can lead to various types of cancer [49] and two types of birth defects [50][51]. Nitrite present in surplus quantity in drinking water will eventually lower the ability of bloodstreams to carry oxygen, leading to the lack of oxygen in the body. Infants and young livestock are lamentably affected, as this causes “blue baby syndrome” [49]. The reaction of nitrites with amines either enzymatically or chemically leads to the formation of potent carcinogenic nitrosamines [49][52].

Consumption of nitrates leads to various tumors in the human body [49][53]. In the digestive system, nitrate leads to the formation of N-nitroso compounds [49][54], which are considered to be carcinogenic. Iodine uptakes can be restricted by nitrates, causing thyroid-related problems [49].

ANN is a black-box computational model [55] that contains interconnected network-like structures passing values to other nodes of the connections. It contains an input layer, hidden layers as required, and an output layer. It is well known for its capability of predicting the non-linear variables [56]. ANN forms the same structure as neurons in the human brain [6][20][57]. It functions like a biological neuron, receiving the input as stimulus, evaluating the stimulus, and then providing the output as the response to the stimulus. Figure. 1 represents a simple example of the neural network. The inputs are fed to the nodes in the input layer, and those nodes pass the values of input data to the nodes in hidden layer 1 via interconnecting links. As the values are passed from input nodes to the following nodes, it is multiplied with the weights and then passed to the corresponding layer through a transfer function [58]. Likewise, it is passed up to the output layer, where the error is calculated using target vector. Based on this error, weights get adjusted to obtain the exact weighted combination of the input data for forecasting the target vector. 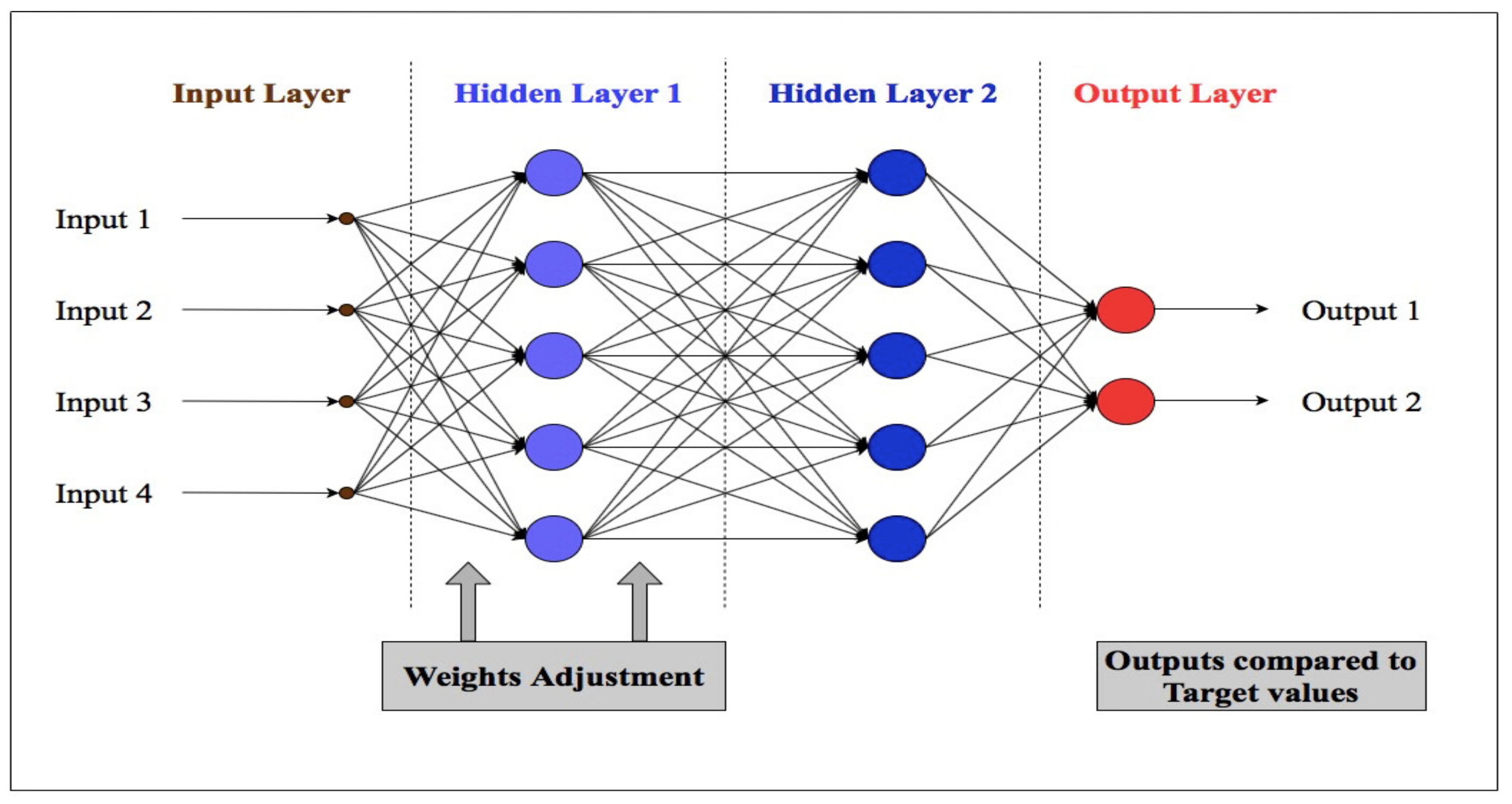 The major advantage of application of ANN model, over traditional model, such as statistical model, is that it learns itself the complexity of nature, without being explicitly transformed into mathematical form [59][60]. Statistical models, have a limitation of assuming additional information to derive a sharp conclusion [61]. The major disadvantage of ANN is that it is susceptible to overfitting. Overfitting is the state in training, beyond which, training error decreases but the model starts losing its ability of generalizing the relation between input and output for the new data set i.e. the testing set data. This results in increasing the testing error and decreasing the overall performance of the model. There are several ways to prevent the model from overfitting, among which well-known method is early-stopping; in which training process is stopped early. But if the training is stopped too early then model fails to learn important information. Hence, training should be stopped accordingly to learn all important information without overfitting.

Many types of ANNs feature different concepts of data processing. Each type is designed differently to obtain a more precise output with less data processing time. This is achieved by changing the networks architecture. According to Jain, et al. [62], based on the network connection pattern, i.e., their architecture, ANN is classified into two categories:

FFNN has the simplest network connection pattern in which data flow in the forward direction only, starting from the input layer to hidden layers, and then to the output layer. No loops are formed in the paths of the data flow. As shown in Figure. 2, FFNN is classified into three subcomponents: single-layer perceptron, multilayer perceptron, and radial basis function neural network (RBFNN). Single-layer perceptron, which consists of one layer, i.e., the output layer, is the simplest form of neural network. It is mainly used for classifying the linearly separable cases that use binary targets. The connection patterns of multilayer perceptron and RBFNN are the same: an input layer, as many hidden layers as required, and an output layer. The only difference between these two is the use of the data processing function. Multilayer perceptron utilizes either threshold function or sigmoidal function [63] in each of its computational units, whereas RBFNN utilizes radial basis function as the activation function in each unit of its hidden layers. The table 1 presents the advantages and disadvantages of different models of FFNN. These models are generally used for time series prediction, system control, and data classification.

Recurrent or feedback neural networks experience the backward flow of data in some computational cells. The data flow is not unidirectional; loops within the cells transfer back the feedback of the errors encountered in computations, with reference to the target values. The feedback of errors helps in updating the weights of the corresponding inputs. As shown in Figure. 2, feedback neural network is classified into four subcomponents: adaptive resonance theory model, Hopfield networks, Kohonen’s networks, and competitive networks. Table 1 presents their advantages and disadvantages. These networks form very complex architectures, composed of a number of loops. These networks are utilized for complex computations, such as speech recognition, image processing, robotics, and process controls. This study is limited to the review of the FFNN. 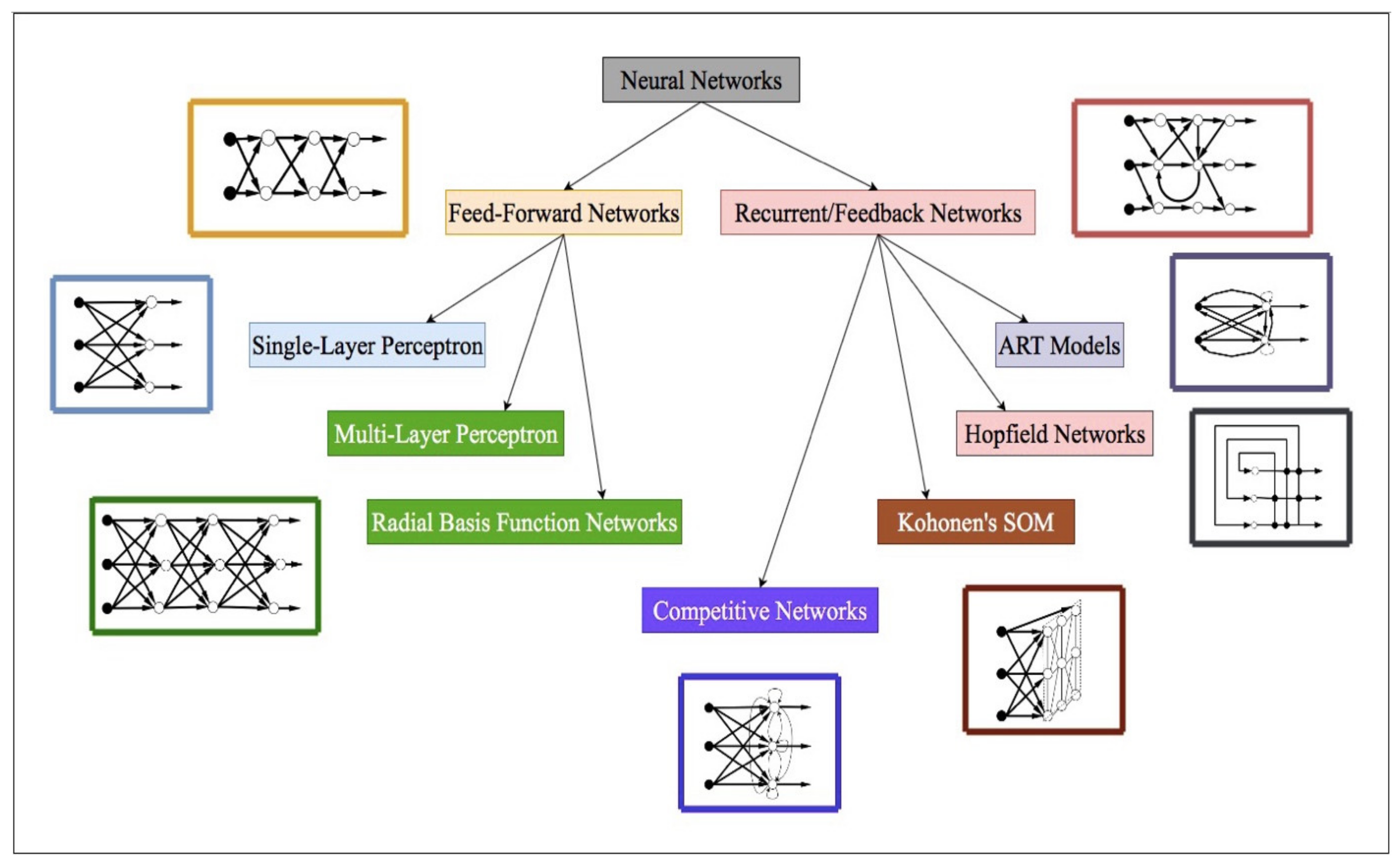 Hybrid model is the combination of different models to solve a computational task. The need of hybridization aroused when the learning models were observed to be very efficient in some cases and inefficient in most of the cases [64]. The main aim of Hybridization is to resolve the limitations of individual model by fusion of decision making models with learning models [65]. The main advantage of hybrid model is that it provides better results in comparison to the standalone model. The decision making model integrated in hybrid model provides good start with selected initial values of the internal parameters of learning models. Hence, increasing the productivity of the learning model. The disadvantages of the hybrid models are: overall training process is time consuming, complex architecture and training requires modern computational resources. Some of the examples of hybrid models are [66]:

Table 2. A summary of studies that utilize ANN model for nitrogen prediction, including their specific area, location, and methods used.