Bathing water management in the European Union (EU) is regulated by Bathing Water Directive (BWD) 2006/7/EC. The first Directive came into force in 1976 (76/160/EEC) and set the standards for designated bathing waters to be met by all EU Member States. Its main objective was to safeguard public health and protect the aquatic environment in coastal and inland areas from pollution. The Directive was repealed in 2006 by the new, revised BWD 2006/7/EC. The purpose of the new BWD is to preserve, protect and improve the quality of the environment and to protect human health. It lays down provisions for the monitoring and classification of bathing water quality, the management of bathing water quality and the procedures for informing the public about bathing water quality. All Member States were required to transpose the revised BWD into national law by 2008, with full implementation due by December 2014.

In the first year of the period covered by this study (2011), only four bathing sites were included in the official monitoring program for inland bathing water quality in Croatia. Over time, the number of sites grew, and in the last observed year (2020), 41 sites were monitored (Figure 1). One of the main reasons for the low number of bathing sites in the first monitoring period was the lack of legislation for inland bathing water management, as the Regulation on Bathing Water Quality (OG, 2014) [1] only came into force in 2014. This year coincides with a year when the number of inland bathing sites increased significantly. As Croatia is rich in water bodies, many of which are suitable for bathing and recreation, it is obvious that the country has not even come close to exploiting its potential in the field of inland bathing tourism. With better management and use of inland bathing waters, Croatia would not only expand its tourist offer but also relieve the coastal areas during the bathing season. 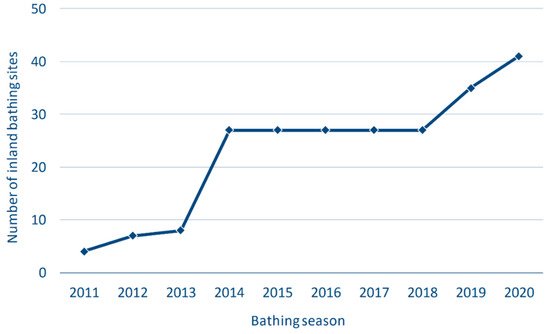 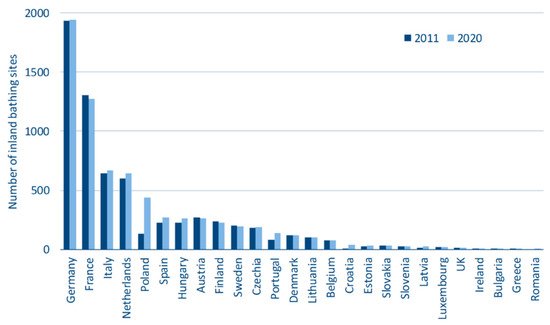 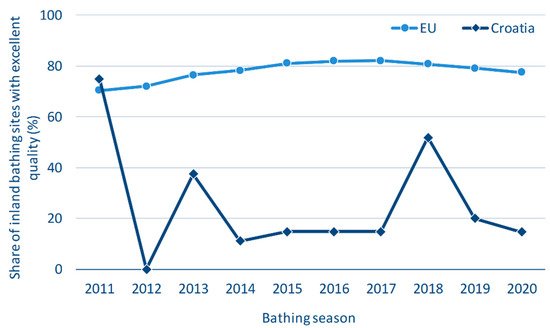 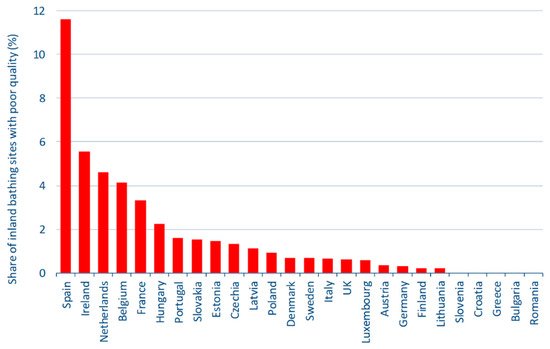 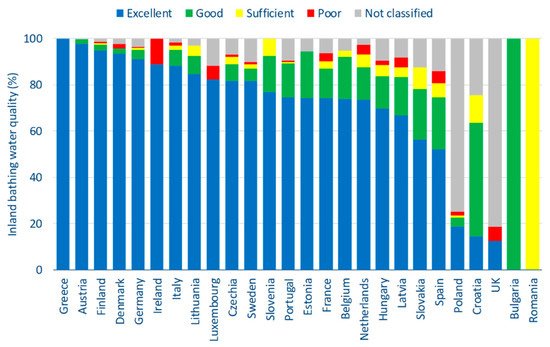 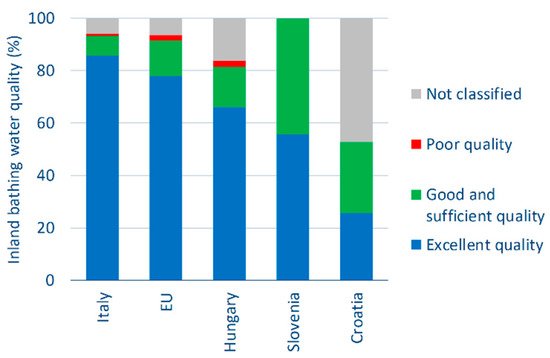 Figure 6. Ten-year average of inland bathing water quality in HR and neighboring EU Member States.
Croatia’s neighbors, which are not EU members, and that also monitor inland bathing water quality, are Serbia and Montenegro. Bathing water management in the Republic of Serbia is regulated by two legal acts, the “Regulation On the Parameters of Ecological Additionally, Chemical Status of Surface Waters and Parameters of Chemical Status and Quantitative Status of Groundwaters” (Official Gazette of the Republic of Serbia 74/2011)” [4] and the “Regulation on Emission Limit Values of Polluting Substances In Surface and Groundwater and Deadlines for Their Achievement (Official Gazette of the Republic of Serbia 50/2012)” [5].
Since the parameters and standards for bathing water quality in Serbia are not in line with those of the BWD, it is very difficult to compare the results with those of the EU Member States. In any case, the quality of inland bathing waters in the Republic of Serbia was analyzed in 2019 (latest available data) [6] at a total of 78 bathing sites; 42 in Central Serbia and 36 in Vojvodina. A total of 777 samples were analyzed for microbiological quality, of which 65 (8.4%) did not meet the requirements of national standards for acceptable quality. The highest percentage of non-compliant water samples was found in the district North Banat (97.4%).
The data showed that the quality of inland bathing waters in Croatia and neighboring countries (which are not members of the EU) was generally worse than the EU average. The results of a study by Markovski et al. [7] which covered four countries, Bosnia and Herzegovina, Macedonia, Montenegro and Serbia, pointed to the difficulties in managing water resources in the region. One of the main reasons was the availability of reliable data on the quality of water bodies in these non-EU countries. This confirms the fact that these countries need additional investments in environmental protection and better and responsible wastewater management. Considering that these countries share many water bodies, it is obvious that efforts to protect these waters from pollution need to be coordinated and reciprocal. 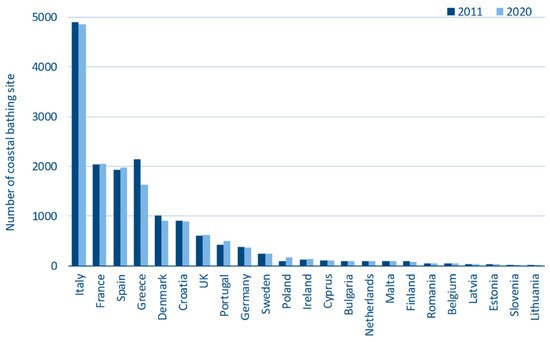 Figure 7. The number of coastal bathing sites in EU in the 2011 and 2020 bathing seasons.
Looking at the number of bathing sites along the coastline of EU Member States, Italy has the most bathing sites per 10 km of coastline (6.4). This is due to the flat and sandy western Adriatic coast with many wide and long sandy beaches. Belgium (6.2) and France (6.0) follow behind. Member States with ≥4 sites per 10 km are Slovenia (4.5) and Spain (4.0) (Figure 8). On the other hand, Estonia (0.1), the United Kingdom (0.5), Sweden (0.8), Finland (0.6) and Latvia (0.7) have less than one site per 10 km of coastline. This is to be expected as these are mainly northern countries with steeper, less accessible and rocky coasts and a much shorter bathing season than in the southern EU Member States. 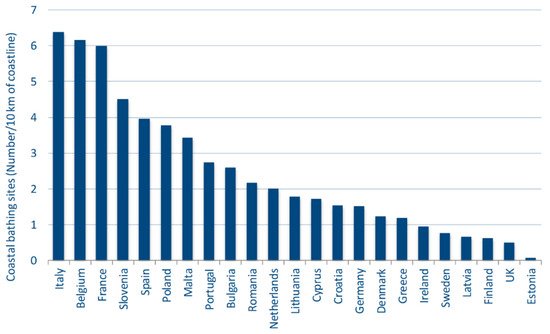 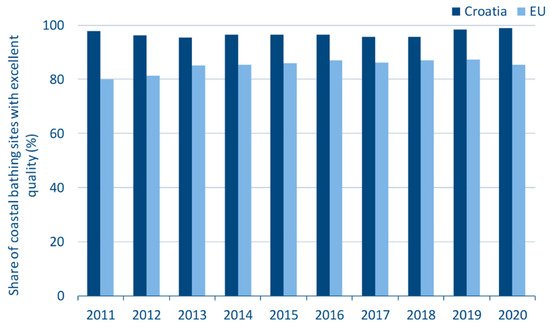 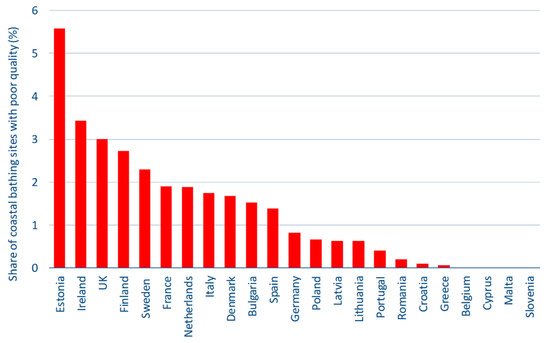 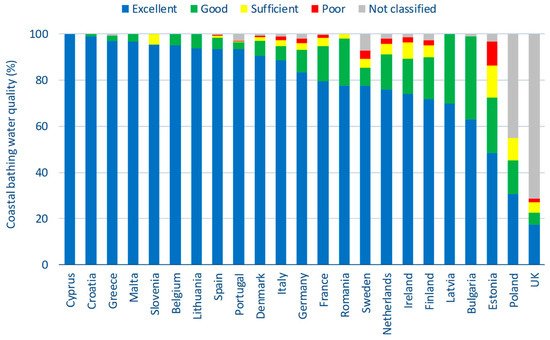 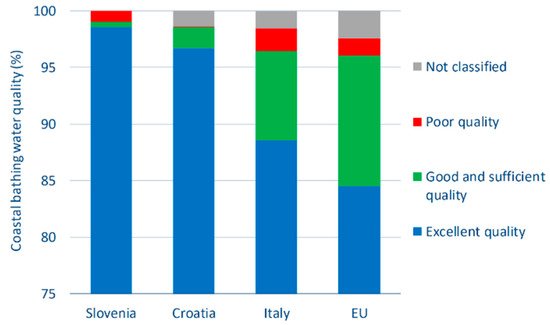 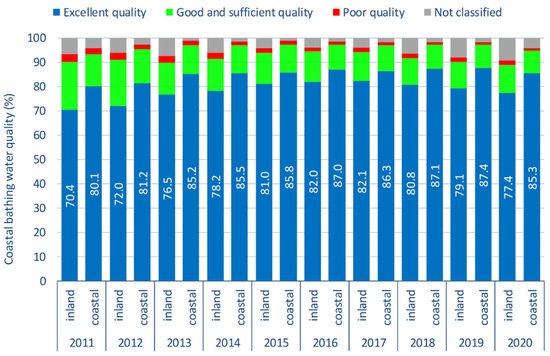