Proteins encoded by mutant genes in cancers can be processed and presented on tumor cell surface by human leukocyte antigen (HLA) molecules, and such mutant peptides are called Neoantigens. Neoantigens are naturally existing tumor marker presented on cell surface. In clinical settings, the T-cell recognition of neoantigens is the foundation to cancer immunotherapeutics. In this article, we discussed the strategies of identifying neoantigens, followed by using phage display to create personalized cancer therapeutics -- a complete pipeline for personalized cancer treatment.

The human body hosts a large amount of microbes, including archaea, bacteria, fungi, viruses, and protozoa [1][2]. Among these, phages infect bacterial hosts and can trigger the lytic replication, release of new phage particles, and new bacterial infections [3]. In addition, phages can also “collaborate” with some bacterial to kill others. The famous “kill-the-winner” model demonstrated that higher-abundance bacterial species have a greater chance of encountering virulent phages and therefore suffer more dramatically than the low abundance bacterial species, which can cause a reset to balance in abundances between different bacterial species [4]. The interaction between phage and bacterial species depends on the binding between phage surface proteins and bacteria. To utilize such features for biotechnological or therapeutic purposes, Phage Display was introduced by Smith et al. in 1985 [5]. Phage display is a process in which libraries of proteins or peptides can be displayed as fusion proteins with one of the coat proteins on the phage surface [6]. Because phage display created a simple bridge between a DNA packaged with the phage and the binding targets of the phage, it provides a powerful method for identifying the strong binders over multiple rounds of selection. Phage display can be adopted in immune library screening, where a DNA library can be first introduced into phage vectors through cloning, and the subsequent screening procedure can help identify the phages that can express antibodies or a part of an antibody that can bind with a target protein molecule [7]. Most importantly, the DNA molecule encoding this antibody or antibody fragment within the phage can be characterized for further applications. Among the many applications of phage display with immune libraries, identifying antibodies that can specifically interact with cancer cells holds the most significant clinical potential.

Cancer is one of the leading causes of human death, and it is initiated from genetic mutations that alter a normal cell’s behaviors [8][9]. Proteins encoded by mutant genes can be processed into mutation-carrying peptides and presented onto cell surface through human leukocyte antigen (HLA), and such peptides are called neoantigens [10]. Neoantigens are cancer-specific biomarkers, and they not only can distinguish cancer cells from normal but also do not induce autoimmune toxicity due to their nature of bypassing central tolerance [11]. These features make neoantigens the foundation for numerous cancer immunotherapeutic approaches, including immune checkpoint inhibitors, such as PD-1, and cancer vaccines under development [11][12]. The effectiveness of immunotherapies against cancers is often remarkable, which leads to dramatic attention to neoantigen in recent years [13][14]. With the recent development of cancer genomics readily identifying patient-specific mutations, neoantigen-based personalized therapeutics is becoming feasible [15][16]. Through phage display, we successfully developed two neoantigen-targeting personalized cancer drugs and observed phenomenal therapeutic effects [17][18]. 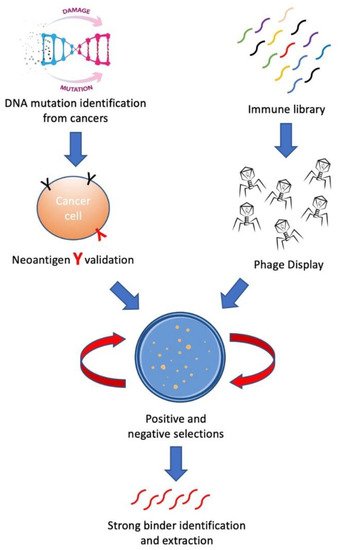 With the development of numerous sequencing approaches in the past two decades, the genomic information of any biological sample is readily available through highly standardized pipelines [19]. One of the most important successes in the healthcare industry in the past decade is the commercialization of next-generation sequencing (NGS) technologies into the clinical space [20]. Advances in NGS have allowed the comprehensive analysis of a cancer patient’s genome to be completed within a couple of days under 1 thousand USD nowadays as compared to taking several years with millions of dollars in the early 2000s [21]. Such fundamental changes have made cancer genome analysis now standard care for cancer patients. Patient-specific mutations can be readily identified, thus laying a solid foundation for further individualized cancer therapeutics and management.

Neoantigens represent the most personalized cancer therapeutic targets. The most important task for building up the neoantigen-based personalized cancer therapeutic method is to know the sequence and abundance of the most feasible neoantigen targets of a patient, and this critical information provides therapeutic targets for all therapeutics, including peptide vaccine, mRNA vaccine, and engineered cell therapies, etc. There are mainly three different methods to identify a neoantigen. The first method is through computation-aided prediction algorithms. With the NGS sequencing results from a tumor sample and data regarding a patient’s HLA types, possible neoantigen sequences can be predicted through numerous algorithms [22][23][24][25]. To date, there are 15 algorithms and bioinformatic platforms reported for neoantigen prediction, with the most frequently used one being NetMHC [24][26][27][28][29][30][31][32][33][34][35][36][37][38][39][40]. Numerous other algorithms are under development, and most of them with assistance from artificial intelligence (AI) [41]. It would be a very convenient way to predict the neoantigen outright with the readily available cancer genome data; however, there are major problems in algorithm-based neoantigen predictions. First, the prediction is far from accurate. This inaccuracy comes from two directions, (1) there are only less than 5% of the predicted-to-be-presented peptides are actually presented, and (2) even for the less than 5% accurately predicted neoantigens, the affinities predicted by the algorithms are not correlated to the immunogenicity of the neoantigens presented on the cell surface [22][42][43]. Secondly, it has also been shown that only a small fraction (1–2%) of mutations are able to give rise to immunogenic neoantigens [44]. Based on these limited chances of success, it is challenging to evaluate the efficacy of a neoantigen-based therapy when only a small portion of the total dosage contains effective materials, and the treatment efficacy is expected to be at least significantly compromised [45][46].

The second method is to screen for immunogenic neoantigens that can evoke specific T-cell responses through functional analysis [47][48][49]. In this approach, tumor cells or antigen-presenting cells that are peptide-pulsed or transfected with mutation-encoding vectors are co-cultured with autologous T-cells to therefore allow the expansion of reactive T-cell clones, followed by validation procedures using tetramer staining or peptide-pulsing assays [50][51]. A major benefit in this approach is that both identifications of neoantigens and isolation of reactive T-cells that are of potential therapeutic value can be accomplished together. However, this method requires the presence of endogenous T-cell clones that can recognize the neoantigens, and such clones are either not existing or existing at an extremely low abundance level among all T-cell clonotypes. A more obvious difficulty for this approach is that it requires co-culturing of tissue cells over a relatively long period of time (~several weeks or longer); the difficulties and hefty cost coming along with the procedure made it clinically unfavorable [52].

3. Phage-Cell Interactions and Their Therapeutic Effects

Phage represents a group of the most abundant vial entities on the planet. Based on their unique anti-bacterial feature, phage has been used for combating pathogenic bacteria in clinical treatments for over a century [56]. Due to the recent emerging issues with bacterial antibiotic resistance, phage therapy has become an important choice and has gained a lot more attention in the past decade [57]. In addition to its direct therapeutic applications, phage provides an easy linkage between the protein products and their genomes; therefore, they are widely used as a biotechnological tool to study protein-ligand interactions and to screen for therapeutic antibodies [58].

Phage therapy has been used to treat bacterial infections since the early 1900s, even before antibiotics were discovered [59]. Phage will selectively interact with bacteria by recognizing the surface proteins of the bacteria. Such selection power can allow phage to kill bacterial strains with a specific surface protein efficiently, which caused a selection pressure to the bacteria [60]. For example, phage specifically targeting efflux pumps can be selected and used to treat the bacteria that are resistant to antibiotics, and the treatment may selectively generate phage-resistant bacteria that do not have efflux pumps, and such bacteria can be further killed with antibiotics [61]. The trade-off between phage resistance and drug sensitivity would improve antimicrobial therapy and prolong the lifetime of current antibiotic therapies [62]. Such a strategy provided phage therapy a unique position in fighting against superbugs.

Phage has a unique biological feature that allows it to efficiently link the genes coding the phage and the proteins presented on the surface. Such a feature makes phage an excellent tool for antibody screening. Phage display, a technique to study the protein-ligand interaction, has been widely used in laboratories. It is one of the most effective molecular diversity techniques. Phage display is based on the fact that an encapsulated library of genotypes can be directly associated with the presentation of a library of molecules on the phage surface. Phage display has been used in a variety of applications, including epitope mapping—where a library of peptide expressing phage is used to interact with a specific antibody, therefore to pinpoint the specific epitope sequence the antibody is interacting with [63]; ligand identification for receptors—similar to antibody mapping, peptides interacting with receptors can be identified [64]; protein-protein interactions—where phage can present large proteins that are potentially interacting with a known binding partner, therefore to identify the unknown binding partners and to study the mechanism of interactions [65]; directed evolution of proteins—mutations conferring binding advantages between two proteins can be studied using a phage display library containing these variants [66]; drug discovery—peptides or ligands that can interact with drug targets can be presented through phage display [67]; and antibody screening—where a large library of antibody-displaying phage can be screened for the best antibodies that can interact with the target antigens [68].

Through phage display with multiple rounds of selection, a potential therapeutic antibody targeting neoantigen can be established. Such candidates have to be evaluated through purification and affinity measurement when they will bind with cancer cells presenting the target neoantigen [7]. Once the best clones are identified, the DNA in the phage can be extracted and used to encode antibodies that can be produced in a massive manner and adopted for cancer treatment [7]. Due to the advanced development of next-generation sequencing techniques, a phage library of stronger binders can be easily achieved [69].

For hotspot mutations that are shared by a large number of cancer patients, off-the-shelf antibody therapeutics targeting these neoantigens are being established by numerous lab and pharmaceutical companies [70]. The rationale behind developing such cancer therapeutics is based on the advancement of large-scale cancer genome sequencing efforts in the recent decade. As shown in Table 1 , the top 100 mutations in the human genome are responsible for close to 60% (58.23%) of all human cancers.

Such highly concentrated distribution of disease-causing mutations makes it commercially feasible for pharmaceutical companies to develop, for each mutation in Table 1 , mutation-specific neoantigen-based cancer treatment methods. It is still debating to describe the origins of tumors through monoclonal vs. multiclonal theories. However, neoantigen selection follows the same procedure regardless of monoclonality or multiclonality. The first step for neoantigen validation is to perform sequencing to identify all cancer-causing mutations, followed by ranking the mutations by allele frequency. Only the top-ranked mutations will be chosen for neoantigen validation because they represent the early events in a tumor’s development regardless of the mono- or multi- clonality.

In addition to the hotspot mutations, there are also patient-specific mutations which account for a significant part of the disease-causing mutations. To treat the disease caused by such less frequent mutations, a rapid pipeline including neoantigen validation and phage display for antibody screening can be established. It is foreseeable in the near future that, immediately after the initial diagnosis of a cancer, a patient will have a small amount of cancer tissue harvested through biopsy, and the tissue will be analyzed for personalized mutations and neoantigens. Once the neoantigen sequence and abundance are determined within a couple of days after the diagnosis, personalized cancer therapeutic agents, such as scFV, can be established through phage display within several days through rapid selection cycles. Highly personalized cancer therapy can therefore be established for each cancer patient in a timely manner.