Legumes can produce many different molecules in response to the attack of insects, nematodes, molds, bacteria, and viruses. Protease inhibitors (PIs) are proteins produced by legumes that inhibit proteolytic enzymes of phytopathogens, which cannot feed on the amino acids of the plant. Legume’s strategy to avoid phytopathogens can be used to produce biopesticides and eliminate or decrease the use of agrochemicals in agriculture.

Crops are affected by several biotic factors like fungi, bacteria, viruses, nematodes, and herbivorous insects. As a result of this attack, some plants may produce protein-based compounds to counteract the pathogens. Some of these proteins are called protease inhibitors (PIs) because they can inhibit the activity of protease enzymes in the pathogens; therefore, they are unable to feed on the amino acids present in the plant and die or delay their growth [1].  Legume plants are able to produce a great variety of PIs. This natural defense mechanism can be exploited to produce biopesticides, reducing the use of toxic agrochemicals (Fig 1). 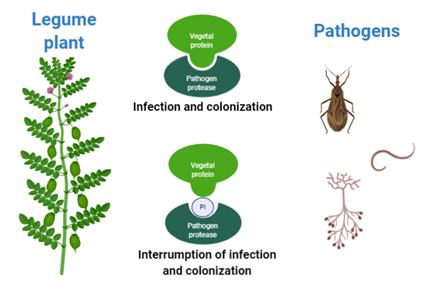 PIs can be divided into serine, cysteine, aspartic, and metalloprotease inhibitors. Serine PIs are the most studied and are widely present in legumes, where two types have been identified, Kunitz and Bowman-Birk. Kunitz type has one or two polypeptide chains of 20 kDa, with four cysteine residues that form two intrachain disulfide bonds and inhibit trypsin activity. The Bowman-Birk PIs are single-chain polypeptides of 8 kDa, cysteine-rich with seven disulfide bonds, and two active domains for trypsin or chymotrypsin inhibition [2]. Cysteine PIs are the second most studied class of inhibitors. These are capable of blocking papain-like cysteine proteases present in many insects and nematodes. Cysteine PIs are grouped into the cystatin superfamily, which includes animal cystatins (stefins, cystatins, and kininogens) and plant cystatins, also called phytocystatins, with more than 80 members. Phytocystatins are peptides ranging in size from 12–86 KDa. Some authors suggest that these kinds of inhibitors are the most promising PIs in transgenic plants [3].

Legumes react to pathogens attack by accumulating a large number of PIs. Many plants can produce PIs; however, legumes are identified as the most important sources of these proteins. The PIs found in legumes have shown superior stability and superior inhibition activity over pathogens in comparison with PIs from other plants [4].

Serine and cysteine proteases are the two essential enzymes present in the digestive system of insects. These proteases become the principal target of cysteine and serine PIs, produced by legumes, when under insect attack. Generally, serine PIs are effective against Lepidoptera and Diptera, whereas cysteine PIs are effective against Coleoptera. Both serine and cysteine PIs are active versus Aphids [5]. Ramalho et al. [4] purified a PI from Platypodium elegans seeds, which resulted in a 98% and 30% inhibition in trypsin and chymotrypsin, respectively. This PI displayed a potent inhibition to trypsin enzymes obtained from the pest insects Anagasta kuehniella, Corcyra cephalonica, Aedes aegypti, and Spodoptera frugiperda. The larval weight of S. frugiperda decreased by 55%, and the extension of the insect life cycle increased, when feeding on the P. elegans PI.

Nematodes are endoparasites that invade plant roots and therefore lead to considerable economic losses in agriculture. It is reported that cysteine proteases, in nematodes, play an essential role in protein degradation. Andrade et al. [6] identified, from Crotalaria pallida, a protein with papain-inhibitory activity. This PI produced up to 95% mortality on Meloidogyne incognita and was observed to internalize and diffuse over the entire body of the nematode.

There are not reports on the effect of legume PIs on the growth of phytopathogenic bacteria. Nevertheless, there is a study of a PI obtained from potato tubers that inhibited the growth of Clavibacter michiganensis subsp. michiganensis, an important pathogen of tomato plants [9]. On the other hand, the bacteriostatic effects of PIs from Cajanus cajan and Phaseolus limensis on Gram-positive and harmful human pathogenic bacteria was reported by Shamsi et al. [10]

Direct extraction of PIs from legume seeds is a challenging and impractical task. It can also result in an ethical problem due to the vast waste of food. On the other hand, the development of transgenic plants or the production of recombinant proteins represents practical strategies.  In the strategy of transgenic plant generation, some pathogens can develop resistance against PIs produced by plants. Therefore, it would be necessary to generate cultivars containing new PIs genes. Additionally, it has been shown that endosymbiotic insect bacteria can produce non-sensitive PI proteases, which helps insects to digest protein in their gut [11]. The use of recombinant microorganisms to produce PIs seems to be the best option because several recombinant PIs can be formulated in a biopesticide. This strategy assures PI effectiveness by avoiding phytopathogen adaptation. The production of recombinant PI has been carried out in bacteria and yeasts.

Mohanraj et al. [12] selected a PI obtained from Rhynchosia sublobata, a wild-type relative of pigeon pea. The gene of this PI was expressed in Escherichia coli, and the recombinant protein produced demonstrated inhibitory activity against trypsin, chymotrypsin, and gut trypsin-like protease activity of Achaea janata and Helicoverpa armigera. Moreover, the recombinant PI was stable at 100 °C and a pH range of 2–12. In vivo feeding experiments showed retardation in growth and a mortality of up to 61% in A. janata. Luo et al. (13) expressed a PI from Malaytea scurfpea fruit (Psoralea corylifolia L.) in P. pastoris. The recombinant protein inhibited mycelium growth in important phytopathogenic fungi, such as Aspergillus niger, Rhizoctonia solani, and Alternaria brassicae and reduced conidial germination of Alternaria alternate by 50%.

Phytopathogens use proteolytic enzymes to infect, colonize, and obtain nutrients from legumes. The production of PIs by legumes is a way to counteract attacks by phytopathogens. These proteins can inhibit the activity of phytopathogen proteolytic enzymes. For this reason, their use in agricultural systems may be an option to replace toxic agrochemicals that harm the environment and affect human health.