The demand for wearable devices to measure respiratory activity is constantly growing, finding applications in a wide range of scenarios (e.g., clinical environments and workplaces, outdoors for monitoring sports activities, etc.). Particularly, the respiration rate (RR) is a vital parameter since it indicates serious illness (e.g., pneumonia, emphysema, pulmonary embolism, etc.). Therefore, several solutions have been presented in the scientific literature and on the market to make RR monitoring simple, accurate, reliable and noninvasive.

A textile sensor was used in [1] to detect talk events based on changes in breathing patterns. Resistive strain sensors made of a conductive material and polymer mixture were used in the proposed solution. These sensors were applied to the upper chest, lower chest, and abdominal using elastic belts, changing their resistance due to thoracic or abdominal expansion and relaxation; movement artefacts are the main issue with this type of sensor. Considerable efforts are made to integrate these sensors into clothing to develop the next generation of wearable for healthcare applications, allowing monitoring biophysical parameters, for instance, during running and cycling [2][3][4].

Smart fabrics and layers are attracting great attention in the scientific community since pleasant and non-intrusive for developing wearable sensors in various application fields, including healthcare, sports, and military applications [5][6][7]. In particular, piezoresistive fabrics are well suited for integrating wearable devices for their easy-to-implement nature, low cost, and high sensitivity. Also, the strength of inertial sensors lies in their versatility and non-invasiveness, making them ideal for various applications, representing a reliable and inexpensive way for collecting user’s motion data; the most important field is undoubtedly health monitoring [8][9][10].

The main contributions of the proposed review work are: A comprehensive overview of the methodologies, materials, and techniques applied to piezoresistive breathing sensors. Specifically, novel IoT-based wearable devices for monitoring respiration activity are discussed and analyzed [11][12]. Also, innovative piezoresistive materials are introduced, analyzing their manufacturing processes and improvements enhancing their performances or reduce production costs or, last but not least, improve user’s experience by making the sensor more comfortable. Furthermore, we report a comparative analysis of discussed piezoresistive devices to define the features and functionalities of the next generation of RR sensors. An accurate survey of IoT-based wearable devices using inertial sensors (accelerometers, gyroscope, magnetometer, etc.) are analyzed for detecting the breathing movements and thus extracting the respiration rate [13][14][15]. Several embedded systems are proposed in the scientific literature, including one or more inertial sensors, a processing unit, and a communication module for wirelessly transmits the acquired data toward a host device or cloud platform, allowing remote monitoring of user’s conditions [16][17]. Furthermore, an overview of the main algorithms for extracting the respiratory rate from the raw inertial data is reported. Finally, a comparison of discussed devices based on inertial sensors is reported.

The proposed review paper is arranged as follows: Section 2 reports an overview of innovative devices, methodologies, and materials based on piezoresistive RR sensors; furthermore, a comparative analysis of discussed piezoresistive-based devices and materials are presented. Later, Section 3 presents a survey of wearable systems and algorithms for measuring breathing activity using inertial sensors. Finally, a critical analysis of the discussed inertial-based wearable sensors and algorithms are introduced.

2. Review of Innovative Piezoresistive System and Materials for Detecting the Respiration Rate 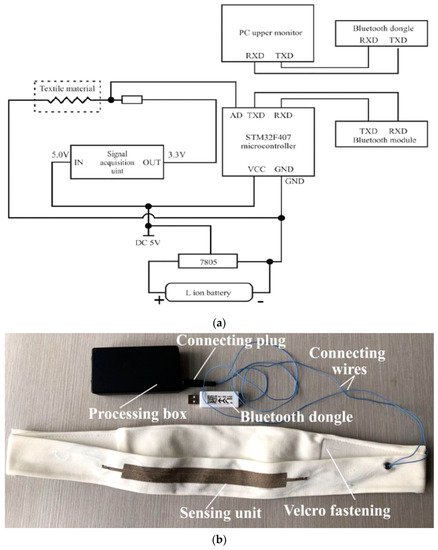 In [19], C. Massaroni et al. developed an innovative device for monitoring respiratory activities, including six piezoresistive sensors. These last were made of 89% silver and 11% spandex piezoresistive silver-plated knitted fabric. Intermeshed conductive zones were generated by knitting silver conductive yarns into the base structure. The resulting material was featured by 0.15 Ω zero-pressure resistance, reaching a maximum value of 0.5 Ω under pressure, and mass per unit area of approximately 346 g∙m −2 . The six sensors were arranged to monitor movements of the pulmonary rib cage (RCp), abdominal rib cage (RCa), and abdomen (AB), cut in different shapes with dimensions of 3 × 0.5, 3 × 1, 5 × 1, 7 × 0.5, and 7 × 1 cm 2 (length × width). The sensors were placed on three elastic bands, along with a custom electronic conditioning and acquisition section to convert their electrical resistances into voltages. In particular, the electronic section was composed of the sensing device, a Wheatstone bridge, an instrumentation amplifier, as well as a microcontroller and a Bluetooth module to wirelessly transmit the acquired data.

Active materials, versatile substrates, and conductive electrodes are the three critical components of piezoresistive pressure sensors. Metal nanoparticles and nanowires [35], conductive polymers [36], carbon nanotubes [37], graphene [38], transition metal compounds [39], and other conductive materials play a crucial role. The active material was included in the flexible substrate, constituted by a thin two-dimensional (2D) sheet or a three-dimensional (3D) pad in films and fabrics to withstand the strain. Due to their high compressibility and versatility, pressure sensors with 3D structures have become more popular, and sponges and foams are two common 3D flexible substrates.

3. State of the Art on Systems for Respiration Monitoring Based on Inertial Sensors

In [40], the authors presented a wearable device to continuously monitor RR in patients with Duchenne Muscular Dystrophy (DMD) and Limb-Girdle Muscular Dystrophy type R (LGMD2). The device was equipped with three IMUs, viz a three-axis accelerometer, gyroscope, and magnetometer. Two IMUs were located on the chest and abdomen to measure changes in orientation due to respiratory motion; the third IMU was installed in a place unaffected by respiratory activity (such as on the bed for bedridden patients) to serve as a reference. After removing non-respiratory movements, quarters derived from the thoracic and abdominal IMUs were calculated; then, the algorithm calculated their PSD (Power Spectrum Distrition) using Welch’s method and searched for peak frequency, representing the respiration component. Afterwards, the signal was damped with a third-order Savitzky-Golay filter to calculate the duration of exhalations and inspirations. In doing so, the expiratory time, inspiratory time, and total time (T TOT ) could be calculated to compute the respiratory rate as 60/T TOT .

Specifically, in [41], S. Kano and H. Mekaru conducted a preliminary study to compare the RR obtained by two accelerometers (Bosh BM1160) placed on the neck with that derived by a humidity sensor. First, the authors installed an accelerometer on the neck, near the carotid artery, where the greatest acceleration is present during breathing. This position was considered favourable because it also allowed estimating the heart rate using the same setup ( Figure 2 ). The FFT was calculated to the signal obtained by applying a 0.5 Hz low-pass filter to estimate the respiratory rate and a band-pass filter between 20 and 40 Hz to evaluate the heart rate. Then, the respiratory signal was compared with that obtained by a nanoparticle humidity sensor to verify their agreement. The correlation coefficient between the two measurements was 0.61, the bias 0.41, and the standard deviation 2.5 BrPM. 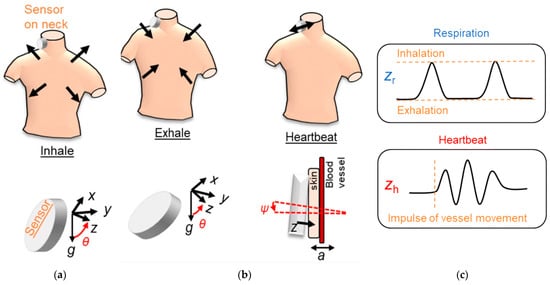 Figure 2. Change of accelerometer axis values during inhalation and exhalation, and position of the axis with respect to the sensor’s surface (a); the pulse of the heartbeat generates an acceleration that can be evaluated even if small (b); examples of respiratory and cardiac signals (c) [41].

In [42], the authors developed two algorithms for determining the breathing rate; the first derived the RR from the photoplethysmography (PPG) signals, the latter from acceleration data acquired by a 3-axis accelerometer. Both algorithms were suitable for implementation inside a low-cost intensive care unit (ICU) or in post-ICU. The accelerometry-based method relied on applying an adaptative line enhancer (ALE) on each axis to separate the information signal from the noise ( Figure 3 then, the axis with the highest signal-to-noise ratio was selected for the following spectral fusion process. In particular, the singular spectral analysis (SSA) was applied to the chosen ALE output. This analysis decomposed the ALE signal obtaining an elementary matrix constituted by two sub-bands, including the three higher signal eigenvalues (sub-band 1) and second and third eigenvectors (sub-band 2). After diagonal averaging, the FFT was applied to each sub-band signal, selecting the higher narrow peak, representing the RR.

Figure 3. Block diagrams of the algorithm for determining the RR from accelerometry [42].

Table 1 reports a comparative analysis of the innovative algorithms for detecting the patient’s respiratory activity based on inertial data, from the point of view of the number of used IMUs, the main processing methods, the used additional information, the algorithm’s performances and the computational complexity.

Table 1. Comparative table of the scientific works related to innovative algorithms for monitoring the respiratory activity from the inertial data.

This review paper presents a comprehensive overview of piezoresistive wearable devices and smart materials for monitoring breathing activity. Specifically, innovative wearable sensors applicable to different body areas (e.g., chest, abdomen, nose, ear, etc.) are discussed, exploiting the resistance change of a piezoresistive transducer induced by respiratory movements. Also, a survey of novel smart textiles applied to the detection of breathing movements is presented, featured by low weight and cost and high flexibility and sensitivity. Besides, comparative analysis of discussed wearable piezoresistive devices and smart materials are presented, providing useful insights to define the future generation of health monitoring sensors. Later, a detailed survey on wearable devices and algorithms based on inertial sensors for monitoring breathing activity is introduced. Different embedded systems are presented, equipped with one or more IMUs to detect respiratory movements. Also, an overview of algorithms and processing tools to extract the RR from the respiratory signal is reported. Finally, comparative analysis of the discussed inertial-based wearable devices and algorithms are presented.

From carried out work, we can state that the inertial-based wearable devices represent the future trend for monitoring respiratory activity, given the recent advances in developing MEMS inertial sensors, making them compact, reliable and sensitive, fundamental requirements for their integration into smart clothes [54][55]. Also, frequency-domain processing and advanced data fusion techniques can be easily implemented on embedded devices, given the high computational power, wide memory and reduced sizes of modern processing platforms (microcontrollers, FPGA, etc.) [56][57].