The use of fish by-products is an important production opportunity for the fishing and seafood processing industries since it can possibly create additional profits while also lowering disposal costs. Benefits of utilizing secondary raw materials from fish processing are depicted in. One of the potential possibilities for greater benefit is to use these industrial wastes and low-value fish for the recovery and hydrolysis of proteins rich in bioactive peptides.

Proteins and natural peptides occurring in the food system and living organisms play a vital role in the functioning of various systems including the cardiovascular, nervous, gastrointestinal, and immune systems. Peptides with biological or nutritional qualities help an organism’s body function better and increase the quality of its diet. These peptides are known as “bioactive peptides” [1], and these are formed of short sequences of amino acids including peptides having two or more amino acids which are inactive within the parent protein’s sequence and can be released through proteolytic hydrolysis with commercially available enzymes or proteolytic microorganisms as well as fermentation [2]. Enzymatic hydrolysis is a useful method for recovering essential components such as bioactive peptides from fish by-products, as well as improving the functional and nutritional qualities of protein without compromising its nutritional value [3]. The Hydrolytic breakdown of high molecular weight proteins to low molecular weight proteins is the basis of protein hydrolysate production [4]. Using different enzymes, different fish as substrates, and variable proteolytic factors such as pH, temperature, enzyme to substrate ratio, and time, a large range of hydrolysates with different physical, chemical, and biological characteristics can be produced [5]. Fish protein hydrolysates, like other relevant protein hydrolysates, can be used in food systems.

In order to produce the FPH with different and desired properties, it is important to know the mechanism of protein hydrolysis. Enzymatic hydrolysis of fish proteins is a highly complex process, and its reaction mechanism has been poorly understood. Some proteases preferentially catalyze the hydrolysis of bonds adjacent to a particular amino acid residue, while some are less specific. The catalysis by proteases occurs primarily as three consecutive reactions [5]: (1) the formation of a complex between the original peptide chain and the enzyme referred to as the Michaelis complex; (2) cleavage of the peptide bond to liberate one of the two peptides; and (3) nucleophilic attack on the remains of the complex to split off the other peptide and to reconstitute the free enzyme. The generally accepted mechanism for proteases indicates that the dissociation of enzyme substrate complex into free enzyme and product is the rate-determining step, which in turn determines the overall rate of reaction. The hydrolysis of peptide bonds leads to an increase in the numbers of ionizable groups (NH3 + and COO − ), with a concomitant increase in hydrophobicity and net charge, decrease in molecular size of the polypeptide chain, and an alteration of the molecular structure leading to the exposure of the buried hydrophobic residues to the aqueous environment [6][7][8].

One of the most efficient approaches to recover powerful bioactive peptides is to use enzymes to hydrolyse fish waste proteins [9]. The ability of peptides to demonstrate bioactive qualities is determined by a number of factors. The protein supply, the specificity of the enzyme utilised in protein hydrolysis, the amino acid content, and the amino acid sequence in peptides sequence are important [2]. The reaction media’s physicochemical conditions including time, temperature, pH, and enzyme/substrate ratio have to be optimized by the enzyme’s activity. Proteases from a variety of sources are frequently utilised to achieve more selective hydrolysis since they are specific for peptide bonds next to specific amino acid residues. For the production of bioactive peptides from proteins, a variety of proteases has been utilised. Enzymatic protein hydrolysis has been achieved using proteases from animal, plant, and microbial sources. There are many scientific reports where different proteases from various sources have been used to produce bioactive peptides with desired health beneficial properties [10]. For the hydrolysis of tuna dark muscle [11], chymotrypsin, papain, neutrase, and trypsin at specific pH and temperature for each enzyme are used. The composition and sequence of amino acid residues in the peptides are considered to be directly linked to the biological activities [12]. The degree of hydrolysis (DH), as well as the size or molecular weight of the peptides, has been suggested as a contributing factor to the manifestation of bioactive properties [12]. The degree of hydrolysis is often used to evaluate the progress of hydrolysis reaction. However, for the given enzyme, substrate, and hydrolysis conditions, the composition, sequence, size/molecular weight of derived peptides, and, in turn, the bio-functionalities of protein hydrolysates derived from fish processing waste are all dictated by DH.

Fish waste protein hydrolysate (FWPH) is a mixture of amino acids and peptides of varying sizes produced from secondary raw materials from fish processing, often by biological processes, that cleaves peptide bonds. Hydrolysis of proteins converts the secondary raw materials into a high value product which is rich in amino acids and biologically active peptides [13]. FWPHs have attracted significant attention due to their antioxidative, ACE-inhibitory, antibacterial, anticancer, and immunomodulatory activities, along with offering balanced essential amino acids as a source of bioactive components in food/feed. Proteases derived from plants, bacteria, fungi, and the viscera of fish can be exploited for making FWPH have good functionality and bioactive properties. Preparation steps involved in production of fish waste protein hydrolysate are given in Figure 1 . 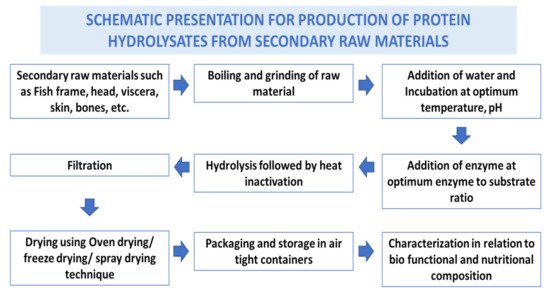 Protein hydrolysates and bioactive peptides were derived from various organs of aquatic organisms ( Table 1 ) and have shown bioactive properties. Several authors have reported in vitro and in vivo bioactivities of peptides/protein hydrolysate derived from fish processing waste. Protein hydrolysates have been derived from head waste from different fish species including sardine, herrings, and salmon. Protein hydrolysates from other secondary raw materials like dark muscle from tuna and frame waste from Japanese threadfin breams, tilapia and other species have been studied for their bio-functional potential [14]. There are numerous reports available on hydrolysed proteins and bioactive peptides from skin (gelatin and collagen peptides) from a variety of fish species including catfish, croaker, horse mackerel, tilapia, cobia, carps and many more.

Antimicrobials in food are used to prevent the growth of microorganisms that cause food spoilage. The most frequently used antimicrobial drugs are organic acids (sorbic acid, acetic acid, citric acid etc.), modifying cell membrane permeability to substrates and establishing inhospitable pH conditions for bacteria growth [37]. When exposed to water, organic acids such as sorbic acid, despite being a highly good preservative, are known to degrade and release potentially hazardous chemicals such as acetaldehyde. As a result, using antimicrobial peptides is a possibly safer approach for preventing similar incidents. Peptides with varied amino acid sequences and varying sizes have been found to have antibacterial action after enzymatic hydrolysis of proteins. Anti-microbial peptides have been found to have a wide spectrum of activity against bacteria, viruses, fungus, and protozoa, among other microbes. They have a broad spectrum of antibacterial and antifungal activities. Antimicrobial peptides that have antimicrobial properties are a class of bioactive peptides and are produced naturally or from protein hydrolysis.

The majority of antimicrobial peptides have been shown to be cationic, which means they have a net positive charge because of positively charged amino acid groups like lysine and arginine with hydrophobic properties and amphipathicity [38][39][40], which facilitate the bonding with the host and solubility in aqueous (lipid) membranes. Antimicrobial peptides are thought to work by forming membrane pores and then penetrating the cell, allowing microbial biological components to be released and the cell to be destroyed [38]. Antimicrobial activity is found in peptides which are released by appropriate hydrolysis conditions [38][41], usually with less than 50 amino acids and low molecular weight of <10 kDa [42].

Cancer has had a direct and indirect impact on the global population as a leading cause of death. While the number of cancer cases is increasing, some of them could be prevented or even treated with natural chemicals. It has been claimed that bioactive peptides found on land and in the sea can minimise the risk of chronic diseases and maintain good health. Since fish by-products as source of bioactive peptides have anticarcinogenic potential [43]. Anticarcinogenic peptides fight cancer cells in a variety of ways, including (1) in the cytoplasm, (2) through stimulation of membrane disruption by micellization, and (3) in the interaction of peptides with cells during apoptosis gangliosides on the surface [44]. Peptides derived from secondary raw material from fish processing demonstrated anticancer activities [45][46]. However, there is paucity of literature available on in vivo studies and cell line studies to evaluate the anticarcinogenic effect of peptides derived from waste of seafood processing. Table 2 shows the anticarcinogenic activity of peptides derived from secondary raw materials of aquatic origin.

Proliferation and cell migration with new extracellular matrix formation are a few of the steps involved in the wound healing process [56]. Oral administration of peptides extracted from various fish species and their by-products, such as collagen hydrolysates, demonstrates retention of moisture over the face along with enhanced viscoelastic properties and reduced sebum levels [57]. Enzymatic protein hydrolysates derived from the bones of silver carp and isolated peptides showed higher efficiency in stimulating metabolism of keratinocytes and wound healing activities, demonstrating the promising nature of bone peptides in care of wounds in the cutaneous region [58].