The main drawback of phase change materials (PCMs) is their low thermal conductivity, which limits the possibilities of a wide range of implementations. Therefore, the researchers, as found in the literature, proposed several methods to improve the thermal conductivity of PCMs, including inserting high thermal conductivity materials in nano-, micro-, and macro-scales, as well as encapsulation of PCMs. However, these inserts impact the other properties of PCMs like latent heat, melting temperature, thermal stability, and cycling stability.

Globally, in 2017, the total primary energy supply (TPES) was 13,972 Mtoe, of which about 81% was from fossil fuels like coal, oil, and natural gas [1]. Burning fossil fuels results in the release of harmful substances like greenhouse gases, including CO2, which contribute to climate change. Moreover, fossil fuel resources are limited, and they must also be converted to a usable form of energy, which is usually related to heat generation. On the other hand, according to the International Energy Agency [1], the share of renewable energy sources (RES) in the TPES is growing. The main disadvantage of RES is their unpredictability, resulting in a mismatch between demand and supply. Due to the abovementioned reasons, fossil fuels should be saved through increasing the efficiency of processes in the energy supply chain, and reduction the abovementioned mismatch. One of the solutions, or at least the minimization of these problems, is to implement thermal energy storage (TES).
There are three main types of TES, depending on the occurred phenomenon: sensible, latent, and thermochemical [2]. In sensible thermal energy storage (STES), heat is stored by increasing the temperature of a material. In STES, solid materials like rocks, metals, concrete, sand, bricks, and liquid materials like water or ethanol are usually used [3]. Latent heat thermal energy storage (LHTES) comes from isothermal or near isothermal heat absorption and release during the phase change of a material [4]. Materials that store latent heat are called phase change materials (PCMs). The third type of TES is called thermochemical heat storage [2], chemical heat storage [5], or sometimes sorption heat storage [6]. In this type of TES, heat is absorbed/released during reversible endothermic/exothermic chemical reactions or sorption processes [3][5]. Each of the abovementioned techniques provides different possibilities of heat storage, and their properties, advantages, disadvantages, and comparison can be found elsewhere in the literature [2][7][8][9]. PCMs are promising heat storage materials due to their ability to store 5–14 times more heat per unit volume than sensible heat storage materials, and their main advantage is that they absorb and release heat at a nearly constant temperature [10]. PCMs can be classified according to two criteria: chemical composition and type of phase transition [11]. The classification of PCMs depending on chemical composition and type of phase transition based on [10][11][12] is presented in Figure 1.

Figure 1. Classification of phase change materials (PCMs) depending on phase transition (top) and chemical composition (bottom) [10][11][12].
Solid–liquid transition is the most commonly used type because of its large heat storage density and relatively small volume changes compared to solid–gas or liquid–gas transitions in which occurring gas occupies a large volume [13]. Solid–solid PCMs had not gained much attention yet mainly due to their low phase transition enthalpies [13], so this paper focuses only on solid–liquid PCMs and in the following parts of paper the term PCM will stand for only solid–liquid PCMs. The second classification of PCMs, based on chemical composition, divided them mainly into organic and inorganic due to their different chemical structure and various properties, which can be found elsewhere in the literature [10][12]. Required properties of PCMs include for example high latent and specific heat, high thermal conductivity, high density, small volume changes, suitable phase change temperature, low supercooling, good thermal stability, and good cycling stability [10][11][12][14]. Good cycling stability means no change in the PCM properties after many melting and solidification cycles. Detailed data on PCMs properties can be found elsewhere in the literature [7][8][10][12][15].
Due to the possibility of holding a large amount of heat, phase change materials may be used in many different applications such as maintaining thermal comfort in buildings by incorporating PCMs into floors, walls or ceilings [16], thermal energy storage of waste heat [17], thermal energy storage in domestic hot water systems [18], solar applications [19][20][21], thermal management of batteries [22], and electronic devices [23], incorporating PCMs into textiles to maintain constant body temperature [24], increasing cooling performance of air-conditioning units [25], the food industry [26], medicine [27] and many others which can be found in [28][29][30][31]. Although PCMs have many advantages over other TES technologies, their main drawback is low thermal conductivity, which in the solid state varies from approximately 0.6 W/(m∙K) to 1.3 W/(m∙K) for inorganic PCMs, and from approximately 0.2 W/(m∙K) to 0.7 W/(m∙K) for organic PCMs [8][12]. The low thermal conductivity of PCMs limits in practice the possibilities of a wide range of implementations. However, it is worth mentioning that there is a group of promising PCMs, i.e., metal alloys, with relatively high thermal conductivities [32], but due to their high thermal conductivity, they are not discussed in this paper. Melting temperatures, latent heat of fusion, and thermal conductivities of selected PCMs are presented in Table 1. 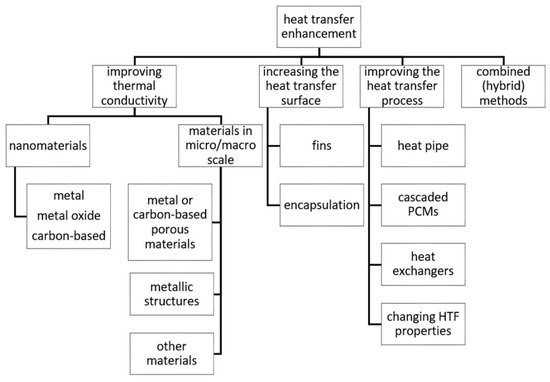 3. Materials at Micro- and Macro Scales