Ovarian cancer (OC) represents the fifth leading cause of cancer-related deaths among women. In the advanced disease setting, OC recurrence after chemotherapy is over 70% in the first 2 years, with few therapeutic options. Immunotherapy with the immune checkpoint inhibitors (ICIs) showed high efficacy and changed the therapeutic scenario of many tumors in the last 10 years.

Ovarian cancer (OC) accounts for about 2% of tumors, representing the eighth most common cancer among the female population. The incidence is around 11 cases/100,000 inhabitants/year, and it is higher among white women [1][2]. The frequency of OC rises with age, being uncommon before 30, and more frequently presenting at 50–70. Globally, ovarian cancer represents the fifth leading cause of female cancer-related deaths, with a 5 y survival rate falling from 90% at stage I to 25% at stage IV [2]. The majority of OCs have an epithelial origin, among whom serous carcinoma has the most aggressive features and is usually diagnosed at advanced stages [3]. Platinum-based chemotherapy regimens represent the mainstay of treatment [4][5][6][7]. The response to these agents and the treatment-free interval (TFI) after platinum define the subsequent treatment, moving from the platinum-refractory (PR) (relapse < 6 months from the platinum end) to the platinum-sensitive (PS) patients (TFI > 12 mos). Despite initial benefits, disease recurrence occurs in over 2/3 of patients within the first two years. Therefore, new drugs were explored, and other agents such as the PARP-inhibitor (PARPi) agents and the anti-vascular endothelial growth factor (VEGF) bevacizumab were approved in the advanced setting [8][9].
Immunotherapy has represented a breakthrough therapy for many solid tumors [10]. Thus far, the best-studied mechanisms for inducing an immune response against tumors rely on inhibiting the immune checkpoint. The immune checkpoint inhibitors (ICIs) consist of monoclonal antibodies targeting Programmed Cell Death Protein 1 (PD-1)/Programmed Death-Ligand 1 (PD-L1) or Cytotoxic T-Lymphocyte Antigen 4 (CTLA-4), expressed by tumor or immune cells. After binding with these ligands, ICIs remove the inhibition signals for the immune system, unlocking the anti-tumor response [11]. However, in OC, ICIs reported modest results, and some phase III trials were prematurely terminated for futility. Combinations with other compounds, such as PARPis or anti-angiogenic drugs, represent promising opportunities to enhance the clinical effectiveness of immunotherapy [12][13][14][15][16][17][18][19][20][21][22][23][24][25][26][27][28][29][30][31][32][33][34][35][36].

Given the impact on morbidity and mortality among the female population, the search for new therapeutic options represents an unmet need for OC. Immunotherapy has revolutionized the treatment landscape of many solid tumors in the last ten years, and it now represents the first therapeutic approach with impressive survival benefits in diseases such as lung cancer, melanoma, renal cell carcinoma [10]. However, limited benefits have emerged in OC, even leading to premature termination due to the futility of some studies. Different components of the OC tumor microenvironment (TME) contribute to this failure, such as myeloid-derived suppressor cells (MDSCs), tumor-associated macrophages (TAMs), T-cells, cytokines, and soluble factors [37][38][39][40]. MDSCs exert immunosuppressive functions, such as the inhibition of T-effector and natural killer (NK)-cells, and are induced under pro-inflammatory cytokines, IFNγ, tumor necrosis factor-alpha (TNFα), interleukin (IL)-6 [41]. In OC, IL-6 plays a negative prognostic role and is associated with high MDSCs, and tumor progression [42][43]. The inflammatory cytokines cooperate to induce cyclooxygenase-2 (COX-2) and lead to prostaglandin E2 (PGE2) synthesis, which limits T-cell recruiting at tumor sites, together with VEGF [44][45]. TAMs are recruited at ovarian tumor sites, and IL-6, IL-10, transforming growth factor (TGF)-β promote their differentiation in M2 macrophages, associated with tumor invasiveness, spread, and angiogenesis [46][47][48]. M2 macrophages increase with the OC stage when contemporary M1 macrophages decrease, playing a negative prognostic role [49][50][51]. Moreover, they promote immunosuppression by producing cytokines (IL-1R, IL-10, C-C Motif Chemokine Ligand [CCL]17, CCL20, CCL22) that inhibit T-effectors proliferation and enhance Tregs function [52][53][54]. Treg cells are associated with advanced stages of OC and have a negative prognostic and immunosuppressive role [54]. They produce IL-10 and TGFβ, contributing to the inhibition of effector T-cells [55]. High levels of immunosuppressive elements within OC TME can also weaken dendritic cells and antigen-presenting cells (APCs) activity [56]. More accurate knowledge of the TME of the primary tumors and the metastatic sites will facilitate the design of more effective treatment combinations (Figure 1). 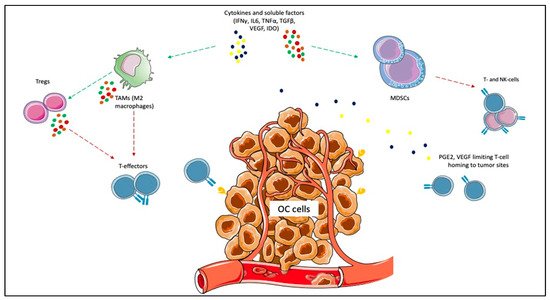