Different diseases and disorders that affect the kidneys include, but are not limited to, glomerulonephritis, diabetic nephropathy, polycystic kidney disease, kidney stones, renal fibrosis, sepsis, and renal cell carcinoma. Kidney disease tends to develop over many years, making it difficult to identify until much later when kidney function is severely impaired and undergoing kidney failure. Epidemiological studies have suggested that a diet rich in fruits and vegetables is associated with health benefits including protection against kidney disease and renal cancer. Resveratrol, a polyphenol found in grapes and berries, has been reported to have antioxidant, anti-inflammatory, antidiabetic, hepatoprotective, neuroprotective, and anti-cancer properties.

1.1. Kidney Function in Health and Disease

The kidneys are a pair of organs located below and posterior to the liver in the peritoneal cavity whose main function is blood filtration and salt and water homeostasis[1]. The kidney is divided into three regions: the outer cortex, medulla, and inner hilum. The renal cortex contains the functional unit of the kidney known as the nephron, with approximately one million nephrons located within each kidney (Figure 1)[2]. Each nephron is responsible for filtration as blood enters the kidney, which migrates through the length of the nephron where specialized regions reabsorb water and small molecules before it is secreted as urine. The nephron can be further divided into the renal corpuscle (Bowman’s capsule) and renal tubule[2]. Located within the Bowman’s capsule is the glomerulus, a filtering unit of blood vessels which is responsible for the majority of filtration within the kidney. Throughout all these structures, the kidney is connected to a highly vascularized network of arteries, veins, and nerves, entering and exiting at the renal hilum[2]. In addition to filtration and reabsorption, the kidneys also produce hormones such as renin, erythropoietin, and calcitriol/vitamin D3, that regulate blood pressure, help control red blood cell production, and maintain bone metabolism and health[3][4].

Chronic kidney disease (CKD) is defined as kidney damage, or decreased kidney function present for longer than three months. In addition, CKD requires an estimated GFR of less than 34.68 mL/min/m2 and abnormalities in biopsy/renal imaging results[5]. Kidney disease tends to develop over many years, making it difficult to identify until much later when kidney function is severely impaired. Physiologically, CKD arises due to many pathological injuries that destroys some of the nephrons, resulting in the nephrons overcompensating by hyperfiltration. Over time, glomerular hypertension, albuminuria, and loss of renal function develop[6]. The increase in glomerular capillary pressure leads to glomerular capillary wall destruction, dysfunction of podocytes that cover the capillaries, and increased macromolecule permeability[6][7]. In conjunction, increased pro-inflammatory mediators are released that stimulate the proliferation of fibrotic cells. In addition, accumulation of ECM molecules results in scar formation and renal failure[6][7][8]. Currently, treatment strategies exist for CKD, with all options aimed at relieving or preventing the condition from worsening, including conservative care, medication, dialysis, or transplantation[9][10].

CKD is not the only form of kidney disorder that can severely affect an individual, with many other disorders severely afflicting the kidney and renal system, such as polycystic kidney disease (PKD), a genetic disorder, either autosomal dominant or recessive, characterized by cyst formation in the kidneys[11]. Glomerulonephritis is term used to describe a range of immune-mediated disorders resulting in inflammation of the glomerulus and other regions of the kidney [12]. The inflammation within the kidney disrupts blood filtration, leading to decreased urination, high blood pressure, hematuria, and albuminuria[12]. Diabetic nephropathy characterized by glomeruli damage and impaired blood filtration develops in more than 50% of people with type 2 diabetes mellitus (T2DM)[13]. In addition, renal cell carcinoma (RCC), also known as cancer of the kidney, is the sixth and tenth most common cancer in men and women, respectively, accounting for more than 140,000 deaths yearly and ranking as the 13th most common cause of cancer death worldwide[14][15]. RCC originates in the lining of the proximal convoluted tubule and encompasses approximately ninety percent of all kidney cancer cases in adults[16]. RCC is characterized by decreased kidney filtration, anemia, and increased blood pressure, resulting in complete kidney failure[17]. Current treatment strategies of RCC include surgery (partial or radical nephrectomy), chemotherapy, immunotherapy, and radiation therapy[18].

Figure 1. The structure of the glomerulus and nephron.

Resveratrol (RSV) (3,5,4′-trihydroxy-trans-stillbene) is a polyphenol belonging to the family of stilbenes, based on shared common structure of two phenyl moieties connected by a two-carbon methylene bridge[19] [42]. RSV is found in the skin of grapes, in berries, and peanuts, with considerably high levels in grape juice (0.19–0.96 mg/L), and red wine (1.9 ± 1.7 mg/L)[20][21][22]. RSV has been studied for its pharmacological effects, including antioxidant, anti-inflammatory, immunomodulatory, hepatoprotective, anti-cancer, anti-atherosclerotic, and anti-diabetic properties[19][23][24][25][26][27][28].
The bioavailability of RSV is relatively low due to its low absorption, rapid metabolism, and elimination. A number of past reviews have focused on resveratrol’s bioavailability[29][30][31] and interested readers are recommended to consult these reviews[29][30][31]. Initial studies in humans, showed low levels of unmetabolized RSV in the plasma upon a single oral administration dose of 5 to 25 mg[31][32][33]. Administration of 25 mg trans-RSV resulted in total resveratrol peak blood concentration of 1.8–2 µM after 60 min[33]. This was similar to another study which showed that increasing doses (500 mg to 5000 mg) of oral administered trans-RSV resulted in plasma levels of 0.3–2.3 µM within 50–90 min[32].

2.1. In Vitro Studies: Effects of Resveratrol on Mesangial Cells

Glomerular mesangial cells occupy a central position in the renal glomerulus forming the central tuft-like structure of the glomerular microvasculature, involved in the generation of inflammatory mediators (such as cytokines, macromolecules and immune complexes), and are responsible for the contractile function. Mesangial cells contract or relax to modify glomerular filtration locally in response to vasoconstrictive or vasorelaxant agents, respectively[34]. Mesangial matrix expansion and vaso-mediator release result in decreased glomerular surface area and hemodynamics, reducing GFR. Mesangial cell function is affected by immunologic injury and metabolic disease, resulting in impaired filtration[35].

2.2. In Vitro Studies: Effects of Resveratrol on Renal Epithelial Cells

2.3. In Vitro Studies: Effects of Resveratrol on Cells of the Renal Corpuscle

Table 3. Effects of resveratrol on cells of the renal corpuscle.

2.4. In Vitro Studies: Effects of Resveratrol on Embryonic Kidney Cells

The development of the embryonic kidney begins with the invasion of the metanephric mesenchyme by the ureteric bud. Under a series of morphogenetic events that convert the mesenchyme to epithelium, the basis of the mature nephron is formed[62]. The human embryonic kidney (HEK) 293 cell line is commonly used in research as a model of kidney cell differentiation[63]. In a study by Rössler et al. (2015), treatment of HEK293 cells with RSV resulted in increased early growth response 1 (Egr-1) protein levels and the transcription of the Egr-1 responsive reporter gene, indicating increased activity[64]. In addition, RSV treatment increased ERK1/2 phosphorylation and Raf activation, while MAP kinase phosphatase-1 (MKP-1) activity was impaired[64]. ETS like-1 protein (Elk-1) transcriptional activity was significantly increased with RSV treatment. Importantly, inhibition of ERK or use of dominant negative Raf prevented the RSV induced increased Egr-1 levels. These data suggest that RSV induces the expression of Egr-1 by ERK and Raf activation and MKP-1 repression[64].

2.5. In Vitro Studies: Effects of Resveratrol on Kidney Fibroblasts

Kidney fibroblasts are found in the interstitium, are involved in the production of ECM components, such as fibronectin and collagen, and act to maintain ECM homeostasis by producing ECM-degrading proteases. With dysfunction, fibroblasts continue to produce ECM components resulting in tubulointerstitial fibrosis and renal failure[68]. Only one study exists (by He et al. (2016)) on the effects of RSV treatment on kidney fibroblast cells[69]. Treatment of NRF-49F fibroblasts with RSV resulted in the attenuation of the high glucose-induced cell proliferation and dose-dependently reduced ROS production. Additionally, RSV treatment increased phosphorylated AMPK and acetyl-CoA carboxylase (ACC) protein levels, while NOX4, α-SMA, and fibronectin protein levels were decreased back to levels similar to control cells (Table 5)[69]. These data suggest that RSV treatment increased phosphorylated AMPK and ACC reduces oxidative stress marker NOX4 activity and results in the reduction of ROS production.

2.6. In Vitro Studies: Effects of Resveratrol on Renal Cancer Cells

2.7. In Vivo Animal Studies: Effects of Resveratrol on Diabetic Nephropathy

Diabetic nephropathy is a major complication of T2DM, that results in glomeruli damage and an inability to correctly filter the blood[13]. Multiple models of diabetic nephropathy including genetic models db/db and C57BL/KsJ db/+ mice and chemical-induced streptozotocin (STZ) administered rats and mice were utilized to determine the effects of RSV treatment.

2.8. In Vivo Animal Studies: Effects of Resveratrol on Renal Fibrosis

Renal fibrosis is often characterized by glomerulosclerosis and tubulointerstitium damage and is the final symptom manifestation of CKDs. Additionally, renal fibrosis can be pathologically described with inflammatory infiltration, loss of renal parenchyma due to tubular atrophy, capillary loss, and podocyte depletion[83].

3. Effects of Resveratrol on Human Kidneys

Only two clinical studies exist measuring the effects of RSV in humans with kidney disease. In a randomized, double-blinded pilot study by Saldanha et al. (2016), administration of RSV (500 mg/day) for 4 weeks to non-dialyzed chronic kidney disease (CKD) patients (GFR between 15 and 60 mL/min/m2) resulted in no significant effects. Antioxidant and anti-inflammatory marker levels were the same in RSV and placebo supplemented participants[88]. It should be emphasized that administration of RSV (500 mg/day) for 4 weeks had low toxicity.

In another randomized, double-blinded study by Lin et al., low-dose (150 mg/day) or high-dose (450 mg/day) of RSV intake for 12 weeks by peritoneal dialysis (PD) patients resulted in significant improvements in mean net ultrafiltration (UF) volume and rate[89]. In addition, angiogenesis markers, VEGF, fetal liver kinase-1 (Flk-1), and angiopoietin (Ang)-2 levels in peritoneal dialysate effluent (PDE) were significantly reduced in the high-dose RSV group. The levels of angiopoietin receptor (Tie-2) and thrombospondin-1 (Tsp-1) in the PDE were increased with RSV treatment[89]. These data suggest that RSV treatment has angiogenesis-ameliorating effects in PD patients and improves ultrafiltration kidney function. It should be mentioned that in the study by Saldanha et al.[88] administration of 500 mg RSV/day for 4 weeks resulted in no significant effects, while in the study by Lin et al.[89] administration of 450 mg RSV/day for 12 weeks resulted in significant improvements and health benefits, suggesting that longer duration of administration of a specific dose of RSV (450 or 500 mg/day) may be required to see/elicit beneficial effects.

Although there are numerous studies measuring the effects of RSV in diabetes, the studies mentioned above were performed in individuals with established CKD and diabetic nephropathy and show a kidney-protective effect of RSV administration. These data highlight the importance of future clinical trials required to investigate the exact effects of RSV in individuals with kidney disease (Table 9).
Table 9. Effects of resveratrol on human kidneys.

4. Effects of RSV at the Cellular/Molecular Level 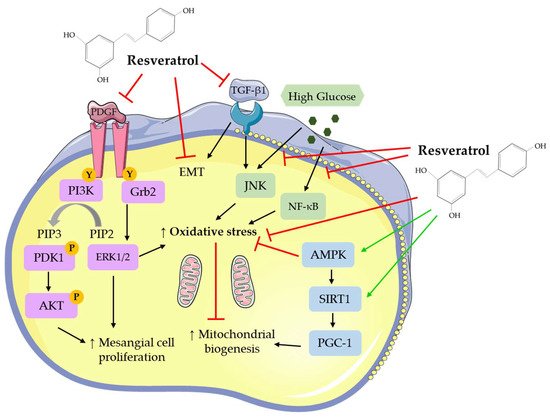 Overall, all available in vitro and in vivo animal and human studies examining the effects of RSV in kidney disease indicate that it can reduce fibrosis, mesangial expansion, oxidative stress, and inflammatory cytokine levels, while improving kidney structure and function. Treatment of renal mesangial, epithelial, and corpuscle cells with RSV resulted in reduced structural changes and ROS production, while antioxidant and mitochondrial activities were improved. In addition, RSV treatment reduced fibroblast proliferation and activation to improve kidney structural maintenance. Renal cancer cells treated with RSV had reduced cell growth, cell-to-cell contact, and migration, and increased apoptosis.

The limited human studies indicate a protective effect of RSV administration on chronic kidney disease with increased kidney filtration rates and volume. The health benefits of RSV are widespread, and the low toxicity of the molecule makes it a prime candidate for medicinal use against kidney disease. However, more research and clinical studies are required to fully understand the effects of RSV on kidney disease.

Further investigation and clarification are required in the following areas: (1) dosage and bioavailability, (2) metabolism, tissue distribution, and biological effects of RSV analogs and metabolites, and (3) signaling mechanisms involved.

Furthermore, future research should be conducted examining the exact signaling/cellular mechanisms affected by RSV and contributing to the attenuation of kidney disease.